If it isn’t one thing…

brdfrd2020-12-08T03:27:25+00:00March 10th, 2017|News|
It’s been a busy week at Fretwater Boatworks. We finished leathering the last of the oars from the oarmarking course. Once we paraffined the working part of the leathers, we oiled the remaining wraps. 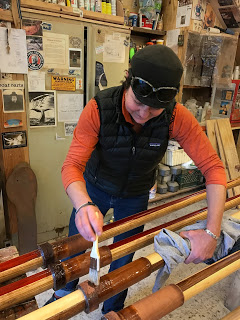 Here are four re-shaped oars and four new ones from the course, drinking in their oil. 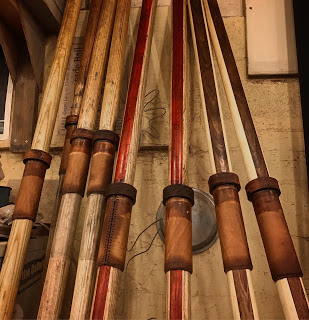 A brief interlude: Rocket meets Greg Loehr: two wildmen in their mid-sixties who spent their lives on the water around the world, dealt with many of the same people, boats, places and events, but never crossed paths until now. 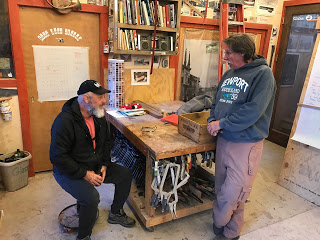 And by pure coincidence, Rocket had come by to ask me about building a foam/epoxy camper. What was I doing at the moment? Building a foam/epoxy cooler–a prototype for AzRA, the river company I work for. And who was advising me? Greg Loehr, who knows more and foam/epoxy construction than just about anybody. What a fun evening ensued. None of us could get a word in edgewise. And there were only the three of us. 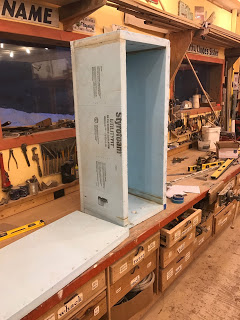 And now for something completely different. BJ and Alan both decided to go ahead with fiberglassing the bottoms of their boats and glue on rubber chines. Here’s how we cut the bevel on the rubber chines: it has to be PULLED through the tablesaw, not pushed. Made a little tunnel with a fingerboard and a stick. We fastened a wire to the leading end of the rubber for Janek to pulpit the rubber into the blade while I kept tension on the uncut end. We had the exhaust fan running full blast and a shop vac fastened adjacent to the blade. It was still a stinky mess but it worked fast and splendidly. 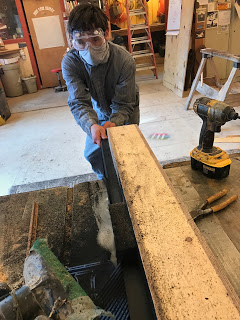 Yesterday morning we glued the rubber chines on BJ’s Thunder River. In the afternoon, we laid up Alan’s Panga with a layer of 24oz biaxial glass with a cover layer of 6oz glass, one laid atop the other, dry and trimmed to fit. Then we saturated the whole mess with Resin Research 2040 resin. The conventional wisdom on glassing boat bottoms is to finish off with a flow-coat of epoxy and graphite powder. It makes the bottom a nice black, and is said to make it a bit slipperier. I’m not sure it does make it slipperier, but it’s a nice thought.

At 8 a.m. this morning (a barbaric hour) we finished off Panga, glueing on the rubber bumpers with contact cement and hammering them to set the glue. 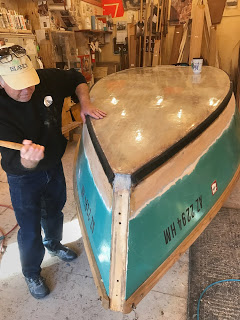 An hour later Panga was out and Mary Williams’s old Briggs boat, Mille Crag Bend, rolled in. Mille had some run-ins a while back with the hard parts of Hance Rapid and Dubendorff Rapid and had been languishing forlornly for some time. Finally Mary bid on, and won, eight hours of labor I donated to the annual Whale Foundation WingDing auction. What was I thinking?

Turns out back in the late ’80s and early ’90s we got really into fiberglassing the old boats. Few hulls escaped. Mille got an extra heavy dose. I was there, I helped. But when a loaded dory meets a rock, even with massive fiberglass protection, the rock still wins. We ground glass for hours. And hours. 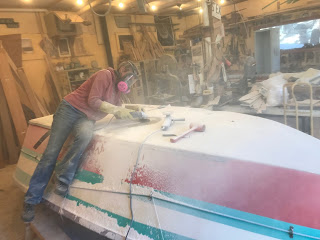 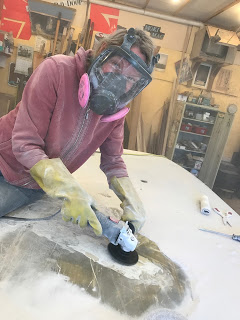 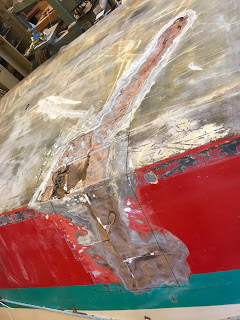 Once we exposed the extent of the damage, we made the call on what to save and what to excise. (I guess if it was all clear glass with no paint we could have made the call without so much grinding–but Mille would be a very ugly boat.) This part was too damaged to repair. A minute with the DeWalt cordless circular saw and problem solved. Or redefined anyhow. 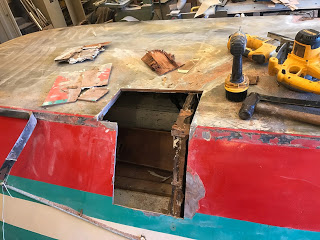 And here I will make a plea to all who would do river repairs on a crashed wooden boat. I’m as big a fan as any of using the Poxy Quick/window screen waxed paper repair system–quick and effective. But for the love of god, people, PLEASE do it on the EXTERIOR ONLY! If your exterior patch does not stop the leak, then make a the exterior patch little bigger or thicker. But DON’T put that gunk inside the hatches. For one thing, all it does is make the leak go into the wood of the hull instead of into the hatch. But the other thing is, someone will have to go into that hatch with a grinder for hours to undo that goo. And I–being in the boat repair business at times–am often the poor son-of-a-bitch that has to go in and do it. DON’T PUT MAJOR PATCHWORK IN YOUR HATCHES! Duct tape to cover the splinters will be way plenty.

Today Mary, who had put a major mass of Poxy Quick in her hatch, volunteered to to grind it all out. (I mentioned to her that I charge an additional $100 an hour to grind gunk out of hatches.) It took her about an hour. An hour of awkward, toxic, noisy, blinding, hateful hell. She won’t put Poxy Quick in her hatch again. Fortunately, we can suspend boats on their side in my shop, so she did not have to stand on her head to do this. And it was one of the big hatches. It is exponentially more hateful in the smaller hatches. 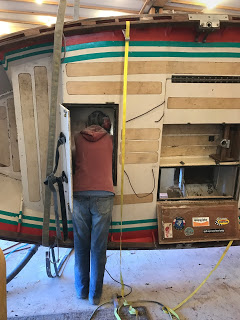 You could actually see her hair turn gray, then white. Bad business. 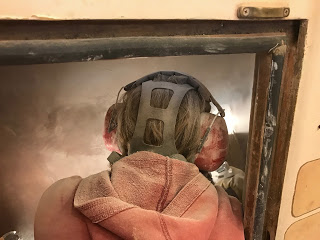 By six hours into the project we had hit the point of maximum grind, ground scarf-joints into the new holes, vacuumed up, and cut scarfs on all the patch wood. For our day’s work we had two lovely new holes in the boat, and four patch boards ready to glue in. The worst is over. A bit of glueing and clamping left to do, a bit of fiberglassing. 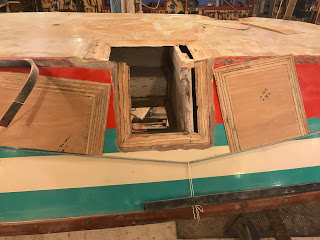 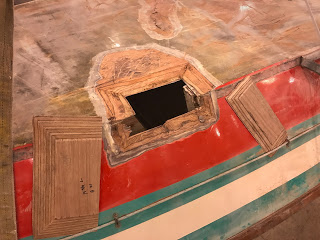 At that point we hoisted Milleto the ceiling to air-dry for a week before we begin reassembly.

There is but one thing I like about grinding fiberglass. Being done. 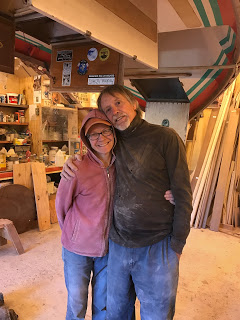