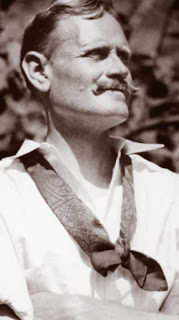 And perhaps he did, although in print he passes the buck a bit. Writing of the new resins he states:

“They are now being used in large quantities in the automotive industry for such things as radios and juke boxes. Some people seem to like this stuff when it is made to imitate onyx and some weird colored marble. Some of the designers who work in it and, of course hate it, call it frozen snot.”
He goes on to eerily predict the future of plastic boats and defame all those who would use the stuff:
“There is no doubt that some day large concerns will make motor boats by the ten thousand, all alike, of plastics. These will suit the swill man’s son, the ash man’s son, and the son of the local politician, for they will all be painted bright red and trimmed with nickel plating. But why someone wants to put these chaps on the water I don’t know, for there is nothing on the water they want to see, hear, or smell. Their only desire is to take some bad girls up around the bend of the river and this they might just as well do overland in the swill wagon their father navigated before them.”
‘Nuff said. I must confess, I don’t really like working with frozen snot. Give me wood any day. But there are certain things the stuff will do that wood is not quite so good at, so I do go through a fair amount the nasty, itchy, sticky, phlegmy stuff. Right now I am working on an entirely synthetic cooler–foam and snot–to see if we can compete with, or better yet improve upon, the commercially available iceboxes for river use. The goals: maximum size for the current rafts, light weight for the aging boatman’s back who has to move it around, maximum ice life, and durability. Our last generation of frozen snot iceboxes have endured a couple decades of hard abuse

We are calling it the Fretwater ChillyBin 276, as it should hold 276 quarts–ten percent more capacity than any other raft-sized cooler. (Chilly bin is Kiwi for icebox.) One problem with most coolers is that after one wee crack, the urethane foam begins soaking up water, concurrently getting ungodly heavy as it rapidly loses insulation value. So we are using impermeable styrofoam. We have laminated high-density plastic skids into the bottom to withstand years of being dragged in and out of trucks, across parking lots, and about the warehouse. 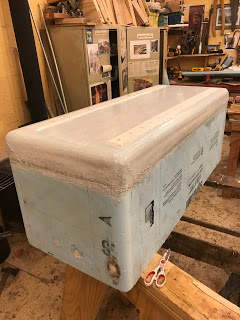 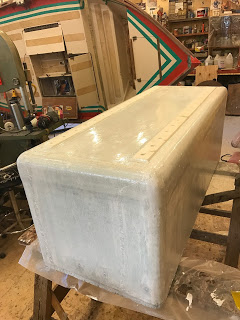 With the inside and outside laminated with 24oz biaxial glass with a 6oz glass overcoat, doubled up on all corners, it should be pretty tough. Here Janek is laying up the rim of the basic box. 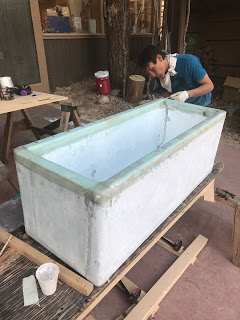 We then covered the wet glass with waxed paper to smooth it out, set a rim of flat particle board on it to give us a good, flat surface for the lid to meet. 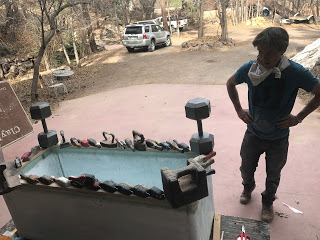 Then we put a few hundred pounds on the particle board to make sure the epoxy understood what we meant. It did. 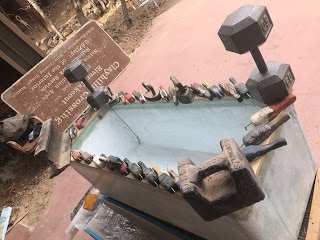 Next we laid up the bottom side of the lid, covered it in thin plastic to make it smooth, and set it in place on the main cooler and weighted it down to take a perfect imprint. It’s gonna fit perfectly. 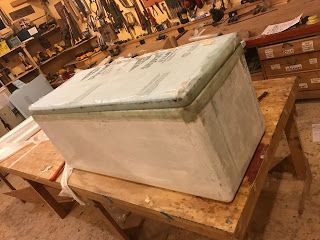 Hinges and hinge fastenings have all eventually failed on earlier coolers. We have implanted anchor points into the foam for a heavy duty stainless hinge which should outlive us. We are also putting two easy-to-use, ergonomic handles on each end. Other coolers of nearly this capacity weigh in from 70 to 160 pounds. the Fretwater ChillyBin 276 will come in at around 60 pounds.

________________________
Between snot laminations we moved to the other side of the shop. We brought the warm and dry Mille Crag Bend down from the ceiling and began injecting one nasty crack with epoxy. 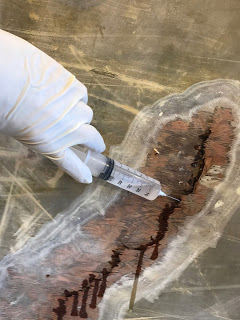 And then mashed thicker epoxy in as well, covered both faces with waxed paper, and crushed it between two sheets of plywood. Janek is cranking down a dozen carriage bolts to make sure our repair comes out perfectly flat and strong once the snot freezes. It did. 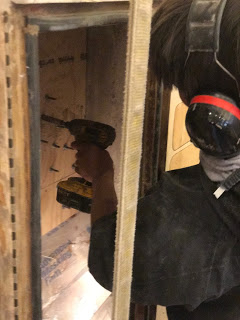 And now on to the main repairs–we need to replace a piece of sidewall and a piece of bottom on each side of the boat. 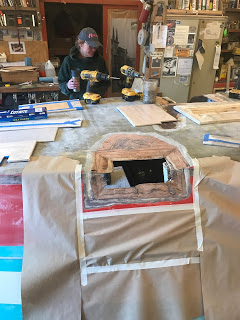 So we cover both side of the scarf joints with runny snot, then thickened mucus, and squash them into place between through-bolted plywood splints. Bingo–good as new. Maybe better. 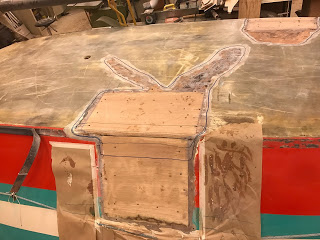 Then we replace the fiberglass layers and cover them with waxed paper as well. Nothing left to do but a bit of sanding, fairing, and painting. 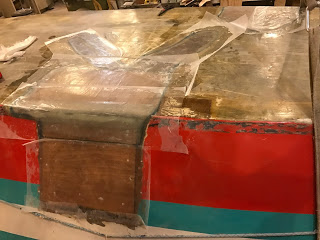 Enough with the frozen snot already. We made a field trip last night to visit our darling Swampscott dory Stella, who is awaiting a good plan for her sails. With Rocket’s help, we think we have a plan. 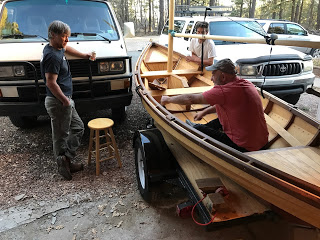 Up in the house we had another in a series of fabulous house concerts. The first act was Blue Moon: Julie Sullivan and Reno and Shelia McCormick playing the sweetest bluegrass music and singing incredible harmonies. 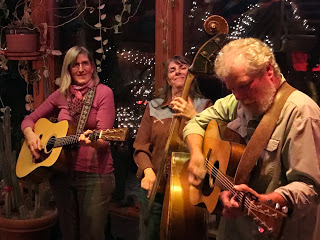 After an intermission Julie returned with Cabel Breckenridge in a duet they call Secret Handshake. A marvelous and eclectic mix of genres with wonderful guitar work and beautiful vocals. 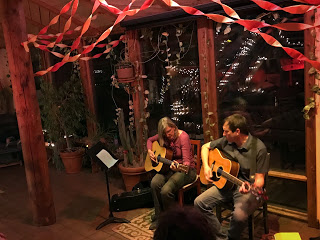 And out in the forest the first two of the more than one thousand bulbs we planted last fall have bloomed. The entire hillside is erupting in green swords of narcissus. I can hardly wait. 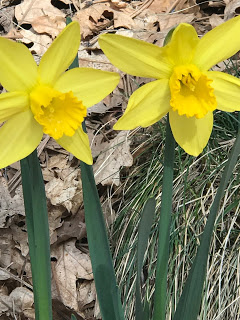