brdfrd2020-11-27T18:41:37+00:00May 9th, 2015|News|
In early April Fretwater Boatworks hosted a four-day oar modification workshop. We started out with oars ranging from fairly decent Swansons to straight-shafted Gulls to bludgeoning old South Branches. In some ways it might have been easier to start with new, raw planks, but it was fun finding the sweet oars that lived deep inside those old telephone poles. First we found the centerlines and drew out symmetrical lines to cut to as we shaved them down. 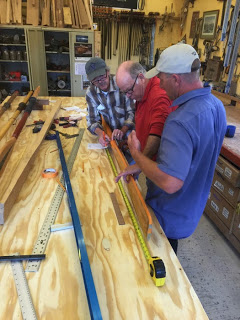 We drew a straight taper from the oar stop to the tip, ending with a 3/16″ tip. Then we got serious with a screaming power planer. 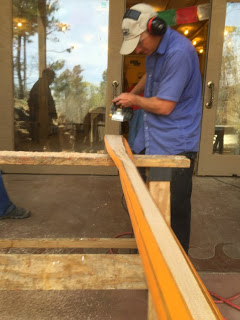 And an in-line sander. 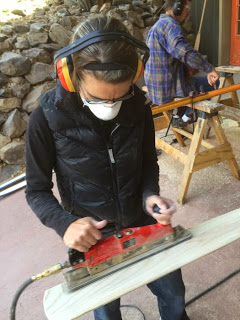 Then it was time to find the centerline in the other direction and continue tapering the shaft into something approaching a square. 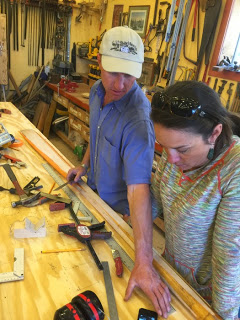 In the near corner Greg Loehr is working with Kim using his tool of choice–the large-grit grinder. 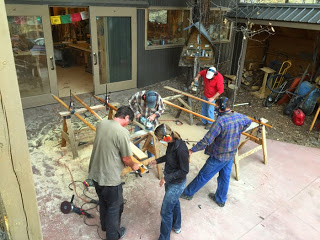 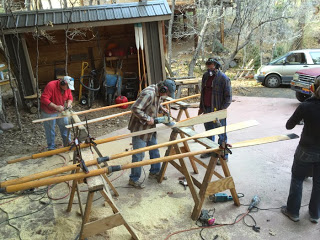 We kept the full tapered thickness down the center of the spine of the blade, and tapered off to 3/16″ around the edges. We also hollowed out the blade between spine and edge. Every ounce of needless wood you take off the blade is two or three ounces you don’t have to lift out of the water a thousand times a day, a hundred days a summer. For decades. It adds up fast. Here is a shot of Kim’s new thinned-down, slightly shortened oar tip, with lined up with the un-thinned oar tip we cut off before grinding. You can see the blade is now about half its previous thickness. 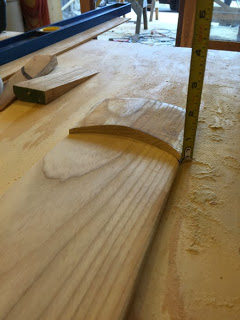 Greg, who made his living grinding surfboards for longer than he cares top admit, was very patient with our incessant measuring and drawing of lines, then went ahead and freehanded his own oars. Don’t try this at home. 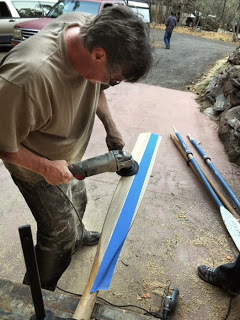 Once we got them thinned and tapered, we put on super-thin glass tips. 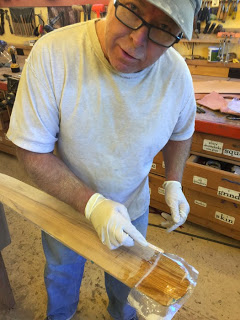 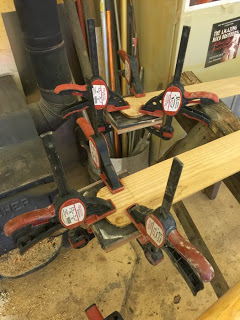 Oh, and we also put nine-ounce lead slugs in the handgrips–not enough to feel weird, but enough to approach optimum balance. And we put on leather wraps and stops. But for some reason I forgot to take any more pictures. That would have been smart, huh? Oh well. Everyone went away pretty excited with their new skills, understanding, and remodeled oars. I think it was a success. May have to do it again between seasons.