Replication is a bitch. Excuse me. But it is so hard to go ahead with things that you know are just not right. I know, I know, the whole point of replicating an old boat and running it is to see how those guys actually did things, what it was like, never knowing there might some day be a better way to go about it. So I struggle as I build these replicas. The hulls are within a gnat’s ass of the dimensions of the originals.  I strive for the same wood, fasteners, and so on—up to a point. I mean—you can’t buy the plywood that Norm bought. There are no old growth Doug Fir trees left–just Doug Fir bushes. But there is some really nice Indonesian Meranti Mahogany. You can’t get the cedar that the folks who built the Kolb boats had. It no longer exists. So one must adapt. Go with what the present day equivalent is. For the Kolb boat I used very knotty cedar, the same stuff we use at WoodenBoat School—it is the closest thing you can get. But then I somehow rationalize blasting quick-drive powder-coated deck screws in places where it will never show, when I could technically buy bronze screws and turn them in—at great cost of time and labor. So I begin to slide down that slippery slope of inauthenticity. Argghhh. What would Norm do?

Today I had a few moments. Putting a brace on the splash guard that does absolutely nothing, versus extending it enough that it actually braces the splash guard. I extended it. Making the entire gunwale system structurally sound versus hacking it into three disjointed parts. I went with sound. No one but me will notice.

The place where things really get out of hand with me is the aesthetics. My joinery may be a bit fussier. I leave a lot more wood natural. I strive to make these boats things of beauty when in actuality, some of them were butt ugly. The Kolbs painted the Edith and the Defiance “lead gray.” That is one stage uglier than battleship gray. At least battleships are boats. I went with natural oiled wood and earth-toned decks. Nevills went with all painted wood. I am leaving a lot of oiled brightwork. Some of Norman’s joints on the WEN are really pretty crude. I just can’t follow those sometimes. Some of the hatch access in the WEN is insanely un-usabale. I made a few adjustments so I will actually be able to get a few more things in and out of the boat.

So what does it all boil down to? Ummmmm. I guess I want to understand the boat and the boatman, especially in terms of the design specs of the boat. But I also want to build a beautiful craft, and want to run it with an honest load on a commercial trip.

Enough agonizing. On with the build.

How many clamps does it take to hold a piece of trim in place? (How many do you have?) 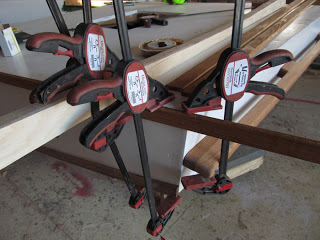 How can you paint beautiful white oak trim green? (I can’t.) 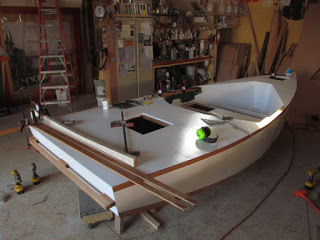 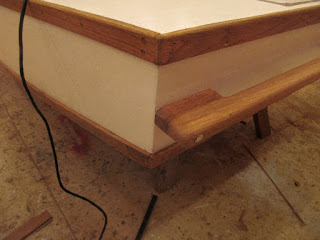 Do I follow Norm’s lead and attach license plates? (His were given him by the respective governors, I believe, on his 1940 trip.) 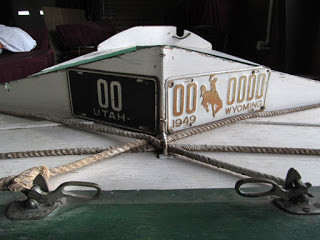 Well… I have some cool plates. The one on the left is my old car plate which, one day, I realized that when read backwards was JWP (John Wesley Powell) 334 (March 1834, his birth month.) The plate on the right is a solid copper “historic” plate from my old 1920 Dodge Brothers Touring Car–the same car Buzz Holmstrom drove. So… hmmm… plates or no plates? 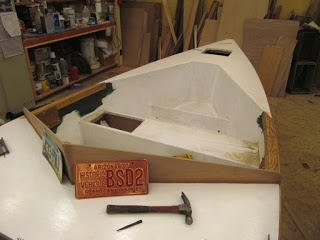 The oar blocks came out nicely and will be strong enough to break either the oars or the oarlocks or me. Most likely me. 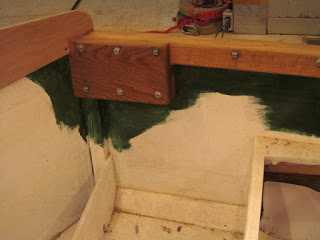 Norm had a little round bracket here that held, I am told, a timepiece. 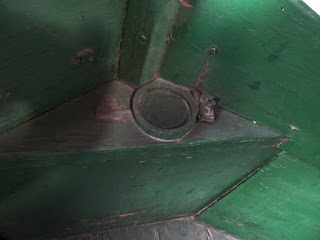 But a beer sure fits nice here. 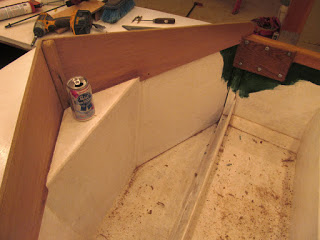 Or for that matter… 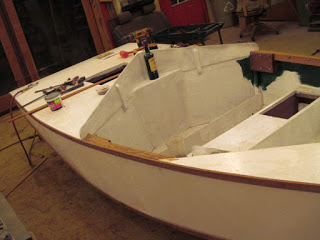 Do I follow Norman’s peculiar trim endings? (Ummm. I did. Not sure I’d do that again.) 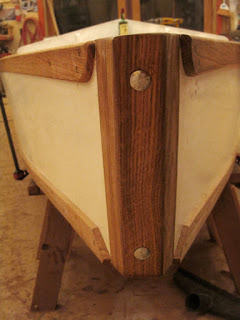 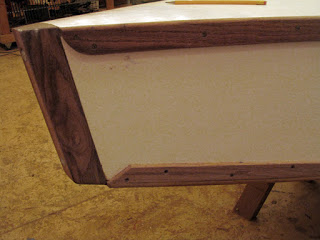 But hey, it is still looking pretty cool. She sure has some serious rocker, eh? 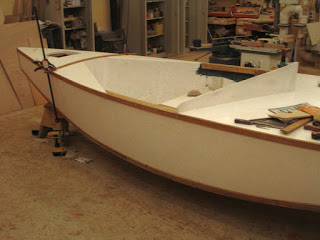 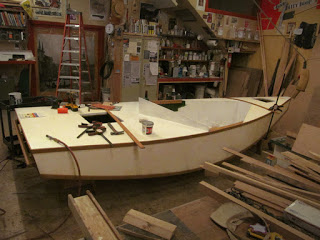