Ganging up on Moe

Josh and and his dad Joel came by for the day again, as did Greg Reiff–Moe Nevills’s great-grandson. And his son Tanner, Moe’s great-great grandson. Sandy Nevills-Reiff, Greg’s mom and Moe’s granddaughter, stopped in this morning as well, with a wonderful gift–a booklet with a collection of photos of Moe herself. I’ll post some of those before long.

Here is where we started at around eleven this morning: 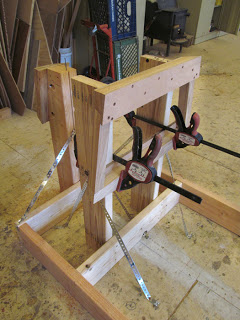 Today was all about ribs. We got three more sets built and up in place, with two teams working the various tasks. Josh’s friend Dylan came by and pitched in in the afternoon and is threatening to join the swelling crew. Late in the afternoon we discovered that somehow the three rib stations we had built did not line up properly with the bow post. After a lot of head-scratching and muttering we realized that we (I) neglected to subtract the thickness of the boat’s side from the width of the bow post, making it 1-1/4″ too wide. That’s a lot. 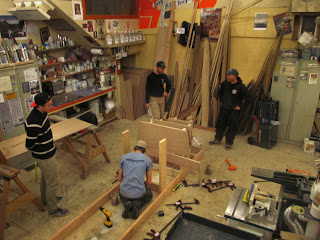 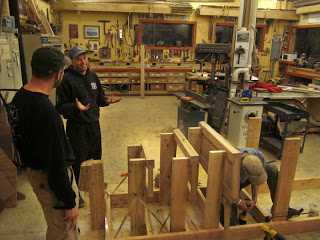 After a long day we were just shutting down when Roy showed up ready to build boats, with Teddy and Emma in tow. So we ran a second shift. Roy got the bowpost trimmed down its proper width, and we got one more rib station done and in place. Three more rib sets to go, then we start fine tuning, making all the lines as fair as we can before installing the chines and fastening on the sides and bottom. 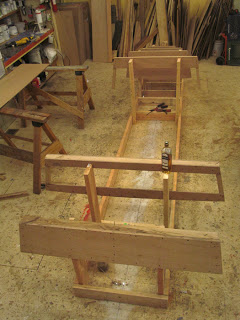 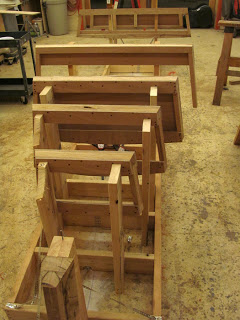 Moe is shaping up. I gotta say–it is kind of a silly boat. Very flat and hard to get a decent store of gear into. But hey, it is the boat that dominated the Colorado River for nearly three decades. As Greg and I were discussing, Nevills may never have seen a real river boat–the dominant Galloway style boat was an odd boat as well, and Norman had little to go on other than the boats he had seen on the San Juan. So he invented something he thought might work. And it did. Although I am not entirely sure how. But as Roy and I agreed tonight, if you really want to understand the lines and design of a boat–go ahead and build it. Besides, I need one in my collection.