Josh, Greg, and I got the last of the ribs up this afternoon. It really looks boaty now. 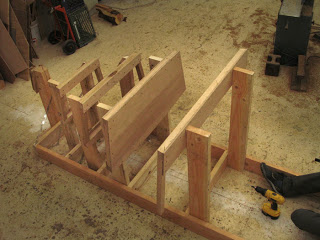 Josh is fastening the final rib set to the strong back. I have pointed out to him that it will likely be he that crawls in under the boat in a week or two to un-screw all the ribs (he being four decades more flexible than I), so it’s best to initiate a convenient angle for that latter process now. (I am sure I am not the only boatbuilder who has screwed a boat to a form such that, once the sides and bottom are on, the screw can no longer be removed.)(A few such snapped-off screws are imbedded in awkward spots in a few of my earlier boats.) 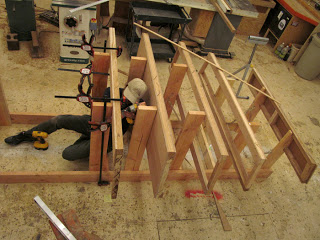 The next step is to get all eight ribs, the bowpost, and the transom perfectly fair–that is, to have them describe the same perfect smooth curves we drew out on the lofting table and (tried to) faithfully reproduce in three dimensions. So we will be making a few sixteen-foot battens tomorrow to arc across the ribcage and see where the glitches are. And more importantly, to see why they are there and how best to rectify them.

River Rat’s comment on yesterday’s blog regarding my use of plumber’s tape makes me want to explain the coolest feature of that system–one of many tricks I picked up from Greg Rössel at WoodenBoat School:

Use two opposing steel tapes to make tight guy lines to the frames. Then add another screw about an inch or so up the tape to put an ungodly amount of torque on the frame. Using a few of these tightening screws, you can adjust the plumbness and placement of the frames incredibly precisely. And with all the tapes humming at high-C, the frames become immovable. Very cool trick indeed. Cheap, quick, easy. And very musical when you pluck them. And also quite sharp, Josh discovered, when you whack a knuckle alongside them. 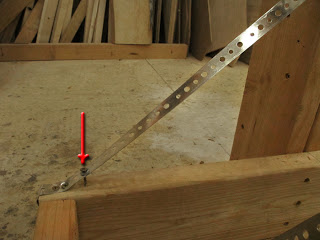 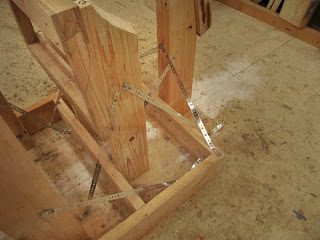