I’ll be heading downriver in the Julius in a few days. A few loose ends before I go. We finished up the Julius’s fittings the other night, including the fancy non-original highly-inauthentic side boxes. But they sure will make life easier on a commercial trip, giving me simple, handy stowage and preventing full swamping of the cockpit. 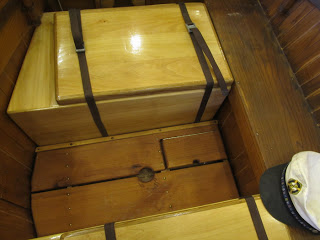 And a floorboard with a highly inauthentic emergency feature: 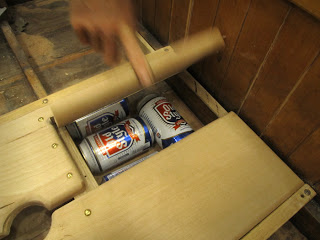 After extensive testing of the new floor’s features, I felt pressed to show Will, who is planning to do a bit of boating in the Julius, just how it is done: 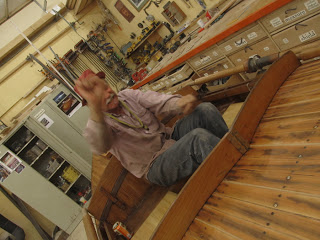 Liam called from Prescott, wanting to bring his dory up for a little consulting. When I got home the craziest thing was in my driveway–the boat, not Liam. 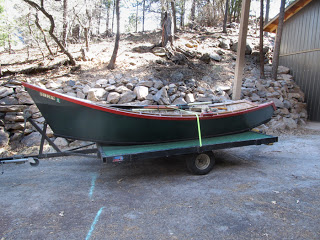 It is a very cool Pritchett classic Rogue River boat, built a while back from Roger Fletcher’s plans. Man, does it look wildly different than the Colorado River style boats I have been working on for the last long while. Low sides, radical flare, and the truncated motor-mount stern. Liam was wondering about decking her over for Grand Canyon but we soon figured out that the oarlocks are four inches lower than the Briggs boats, which are almost too close to the water already. We imagined what would happen if you drove it up the face of a big Grand Canyon wave with that crazy stern. Quick and ugly, that’s what it would be. 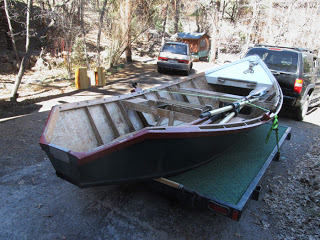 The wood fairy stopped by while I was out of town last week. This is a load of Modesto Ash from Southern California. My friend Jim McKenzie brought it by from his friend Don Seawater, who has a mill in San Luis Obispo. Last time Jim brought Monterey Cypress. Before that, sycamore. All of these woods are fascinating, but fail to show up in the books about structural properties of wood. Makes it more interesting. This Modesto Ash, which is the same species as our local Velvet Ash, looks great. We’ll see how she works after a summer in the drying loft. 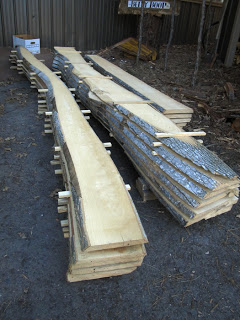 I went out on a training trip for AzRA a couple weeks ago, blathering to the new young boaters about all the stories I think I remember. Here is a shot of the mysterious “boat” near Nankoweap. It appears to have been the skeleton of some sort of fabric boat–canvas? animal hide? Hard saying. It has some round manufactured nails in it so it isn’t ancient. Most likely some prospector wandered into the area in the 1900s, failed to strike it rich, and left this under a ledge in case he came back. 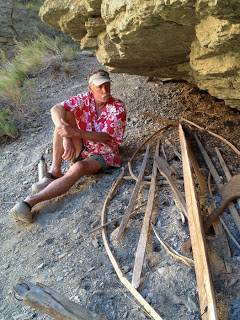 And lastly, here is a shot Lora took of us shopping for our Glen Canyon float. I seem to be dressed as the entire cast of Gilligan’s Island. 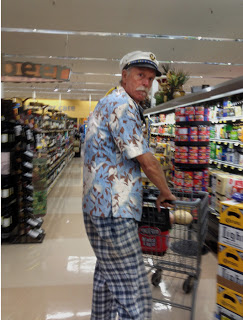