Mining for the Moqui

A couple years ago I donated eight hours of boatshop labor to a local charity auction. Marieke Taney won the bid and showed up in my driveway with the most horrendous unidentified floating object I have ever seen–it was once a whitewater dory in Martin Litton’s fleet, but had since been so bastardized with bolted and glued on detritus that the original boat was barely visible. 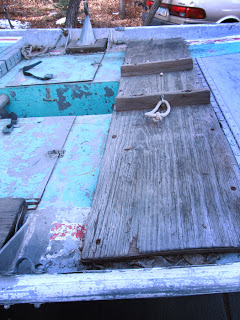 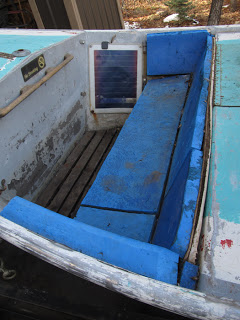 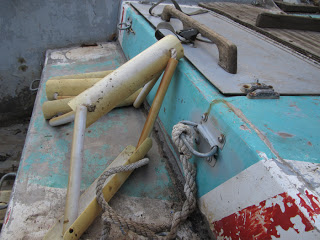 It was built in 1973 by the notorious One-Armed Willie Illingworth of Medford, Oregon, inventor two years earlier of the aluminum drift boat. One of two Grand Canyon boats, it was called the Moqui Steps–its sister the Ootsa Lake. Originally delivered without decks, the Moqui ran several years with a wretched decking system made of a resin-impregnated gunkboard called finform, which had been screwed to the hull with sharp screws that were too long of the job, resulting in hatch interiors that were lethal to both duffel bags and flesh. It was a modified McKenzie hull, up-sized for Grand Canyon use and with the flat midsection usually associated with Rogue boats. Although the Moqui and Ootsa were both serviceable boats, they were outclassed by the growing fleet of Briggs boats and eventually sold off.

Here is a wonderful Rudi Petschek shot of her in her heyday, amid her peers at Phantom Ranch in Grand Canyon. She’s right in the middle. 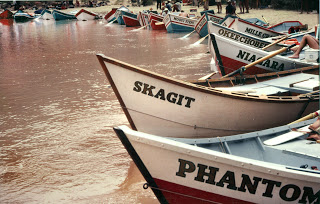 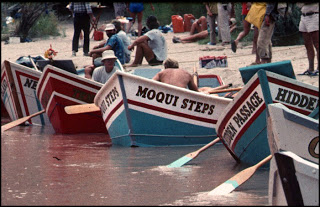 The Moqui Steps fortunately got aluminum decks to replace her old finform horrors, and eventually ended up in Williams, Arizona, where her owner modified her nearly to death for trips on smaller rivers with scouts or some such thing. Massive amounts of iron and plastic plumbing and wiring were bored through the decks; foam and rotting plywood were glued in every available spot, rotting floorboards were screwed inside all the hatches, paint and Bondo were exploding from the exterior, gallons of silicone seal were smeared in every conceivable place (and a few inconceivable ones) and, to be quite honest, the boat Marieke parked in my driveway did not look like there was much worth saving. Marieke and her brother Harlan had gone in on the purchase, primarily because the trailer it was on was worth the purchase price; the boat was essentially free.

I could have said junk it, and perhaps I should have. But being the eternal optimist, I launched into a restoration attempt. I burned my entire eight charity hours removing debris from the boat, filled a giant trash bin, and although it looked a lot better, it still failed to inspire anyone. 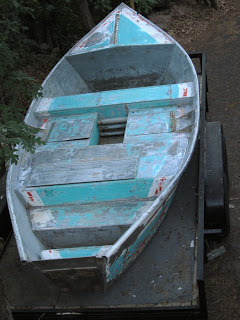 Marieke subsequently fell in love with another boat, the Betty Boop, and has since begun a new life together with Betty. But somehow a fire kindled in Harlan this month and he brought the Moqui back for round two. On Monday we began a three-day assault on four decades worth of paint and gradoo. Terrifying work, but it paid off: 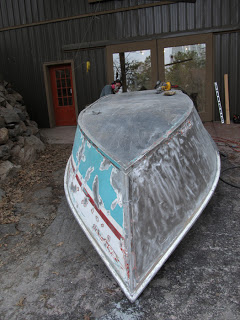 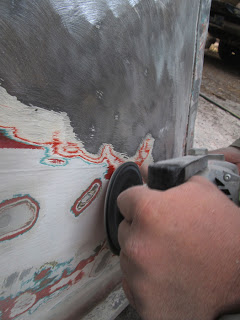 Then shiny aluminum once again. Will Viktora, Harlan, and Marieke pause for refreshments amid the grind. 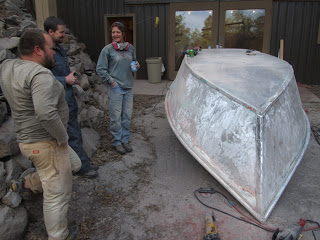 And go back at it. What a dreadful din: 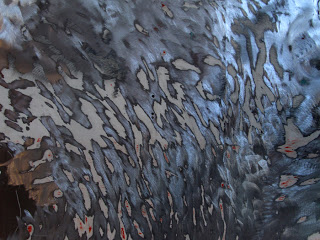 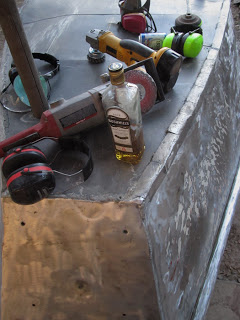 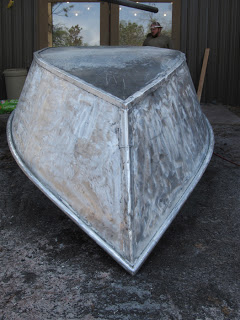 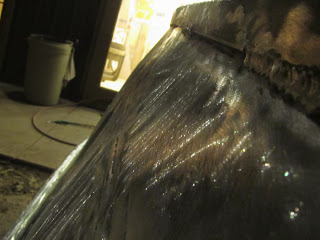 After midnight Will daintily massages some dents with a ten-pound sledge. The neighbors fail to alert the police. 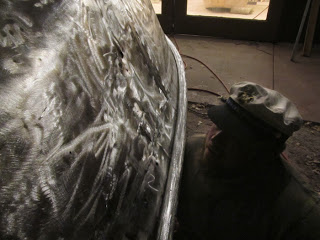 This afternoon Will and Harlan delicately rework the side profiles: 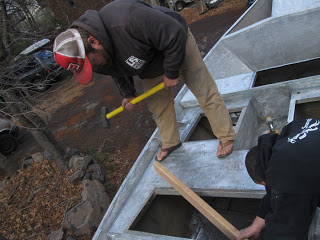 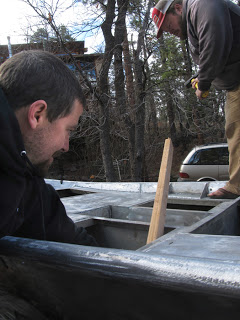 Amazingly she actually looks like a boat again. Now she is off to the welder to get a hundred drill-holes patched and a few modifications to the hatch lids. That and some paint and I think she’ll be a fine family boat for Harlan’s growing brood. Another unique chapter in Grand Canyon boating history lives on. 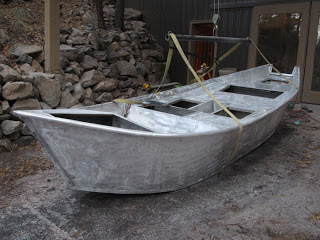