The End of Hum Woolley’s Road

It somehow seemed appropriate to have a boat with me when I went to find Hum Woolley’s destination on his 1903 boat trip through Grand Canyon. He left Los Angeles with a boat and two helpers to get to the Marquitta Lode in order to do some assessment work for the mysterious Madame Schell (Mrs. Jaques Traves). On his way, his became the first expedition to launch at Lee’s Ferry, and Woolley and his companions completed the fifth known traverse of Grand Canyon by boat. Why he didn’t take a train to Needles or Yuma and land coach on to Quartzsite will not likely ever be known.

About 5 miles west of Quartzsite, Arizona up a winding dirt road in the foothills of the jagged Dome Rock Mountains is the Marquitta Lode, now called the Marquitta Mine: still an active gold mine, owned by a grouchy guy named Dale. Dale’s caretaker, a gray-haired, orange-toothed man whose name I did not catch, was amused to see a boat arriving, and enjoyed the tale of Hum Woolley’s journey. Dale, however, thought we were stupid sons-of-bitches and would not let us through the gate to turn around. So after a couple quick snap shots we backed on down the mountain, laughing pretty much all the way. I’m not sure if you really need a boat to get to the Marquitta Lode, but it’s sure fun to have one. In that I agree wholeheartedly with Hum Woolley. 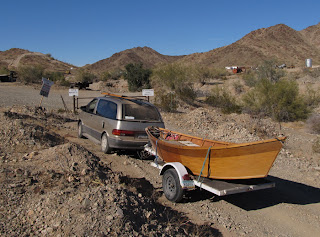 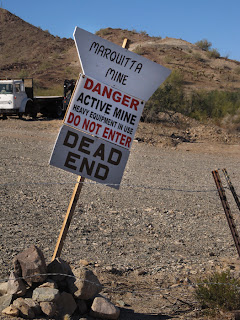