I got back home in mid-August in time to see the biggest flood of the Rio de Flag in local memory. This was but one of several floods in this summer astonishing monsoon season. Unfortunately these sudden localized blasts do little to alleviate the drought.

Back in the shop I caught up on a few of this summer’s ouchies. 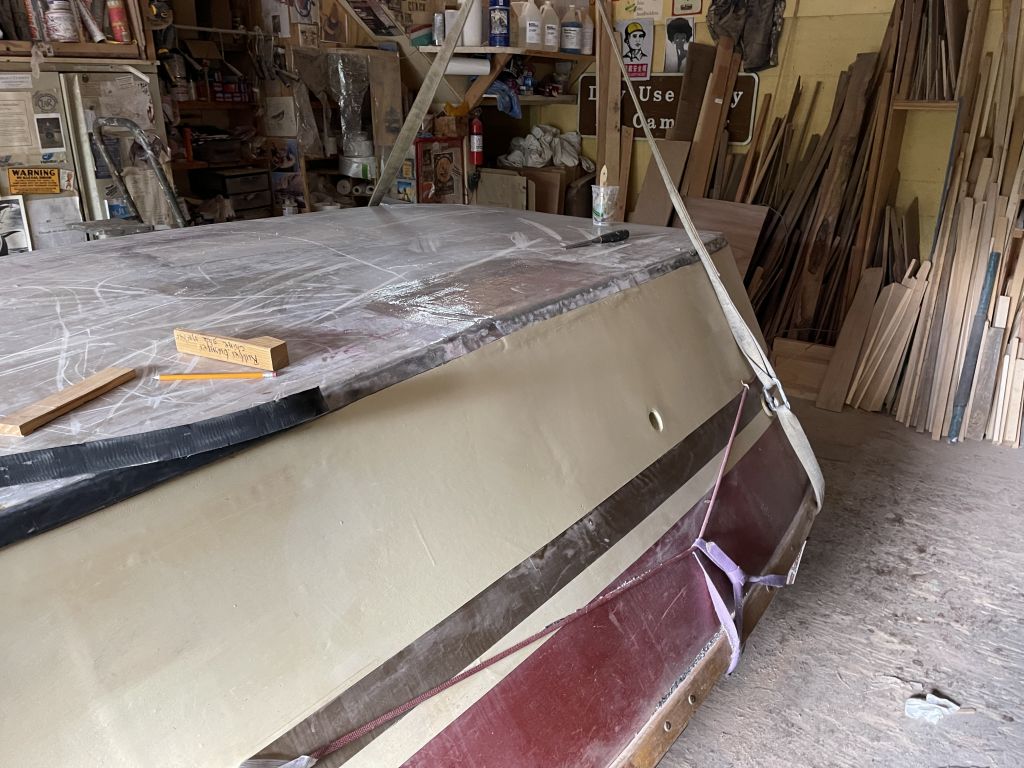 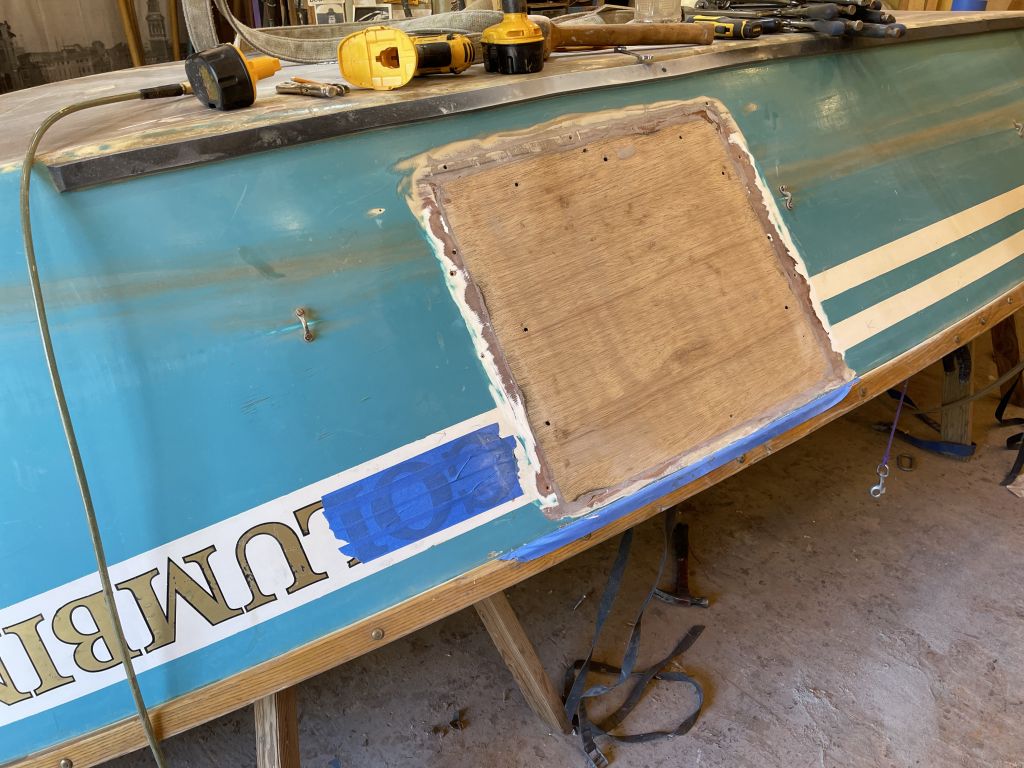 All better. Ready for the next challenge. 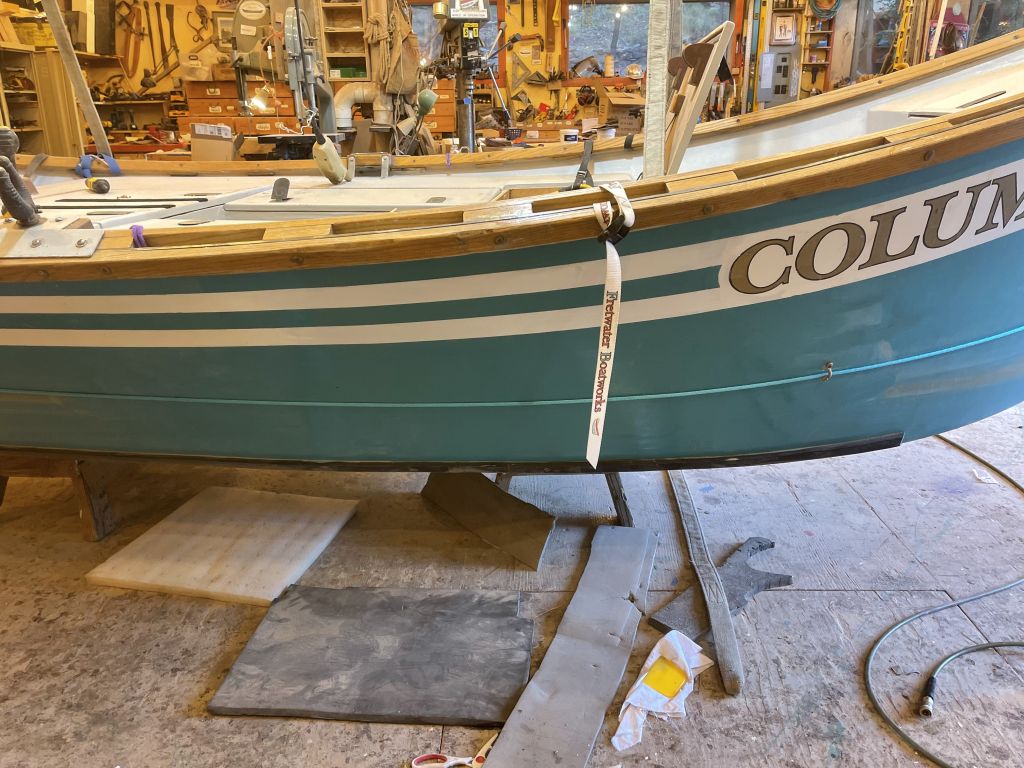 Drawing up a boat for this winter’s boatshop fun. It’s a variation on the Chub–a 13’6″ boat I worked on with Mike Dehoff at Eddyline Welding in Moab a couple years ago. Mike’s two aluminum manifestations of this boat are amazing dories. 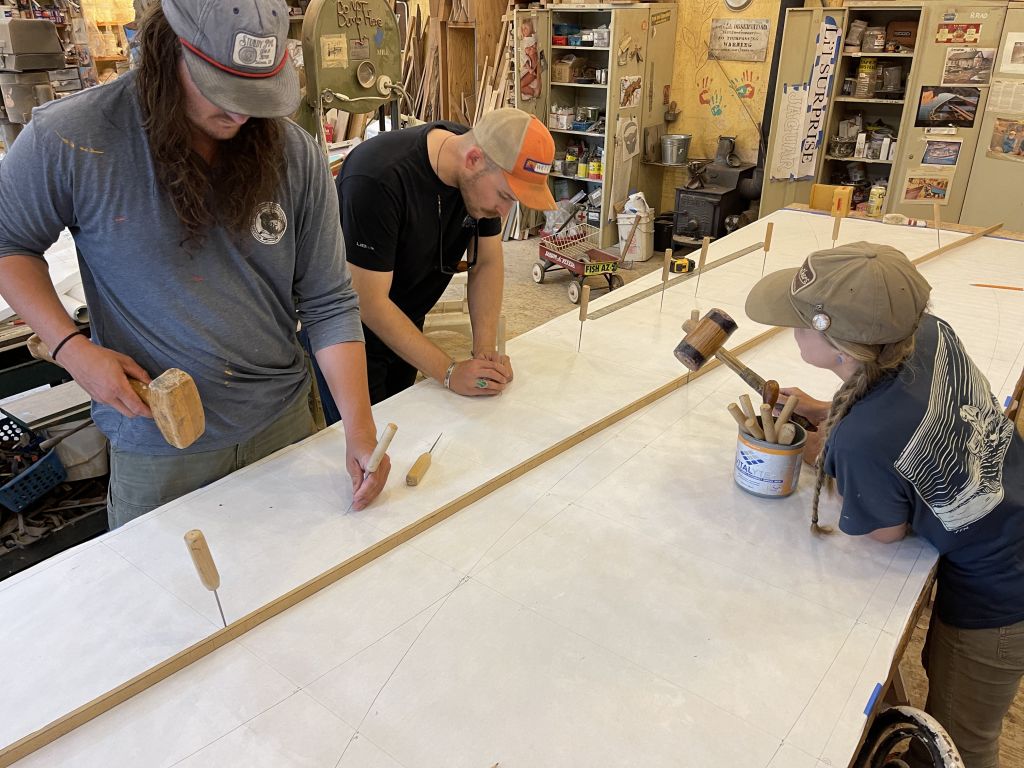 I picked up a pile of Ponderosa Pine from Silas at his local sawmill and ground much of it into hamster nest. 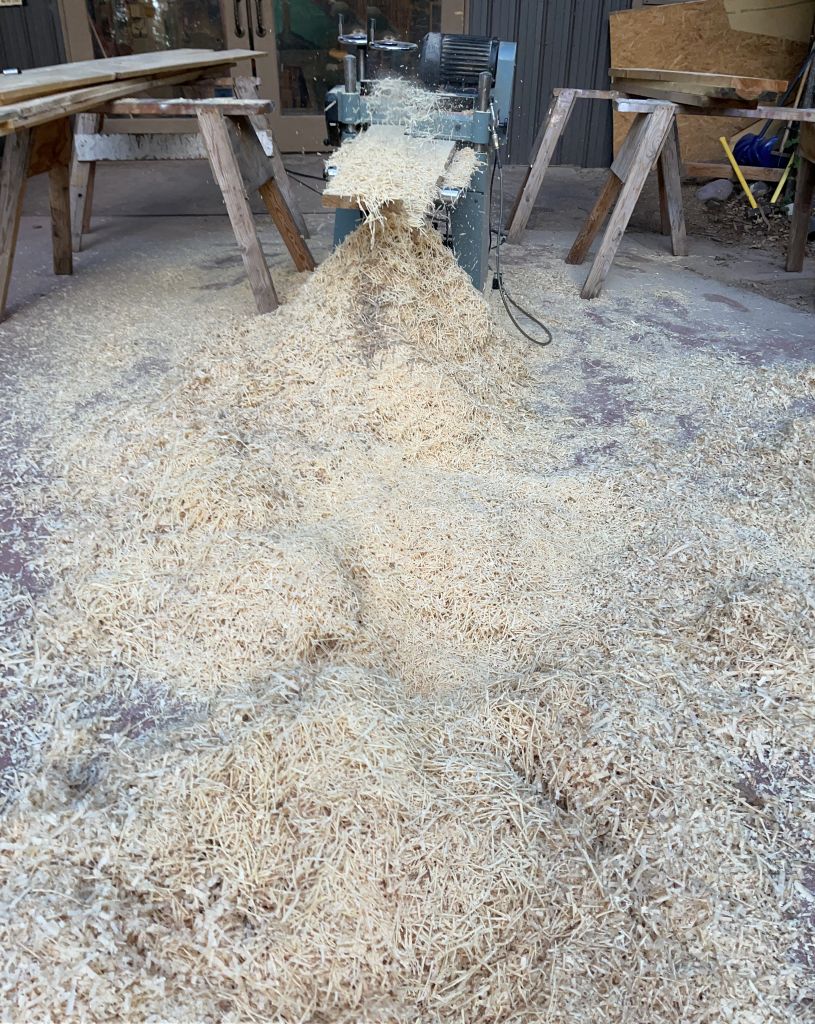 The remainder turned into another suite of drawers for the shop, to aid in my unending but futile struggle against entropy. 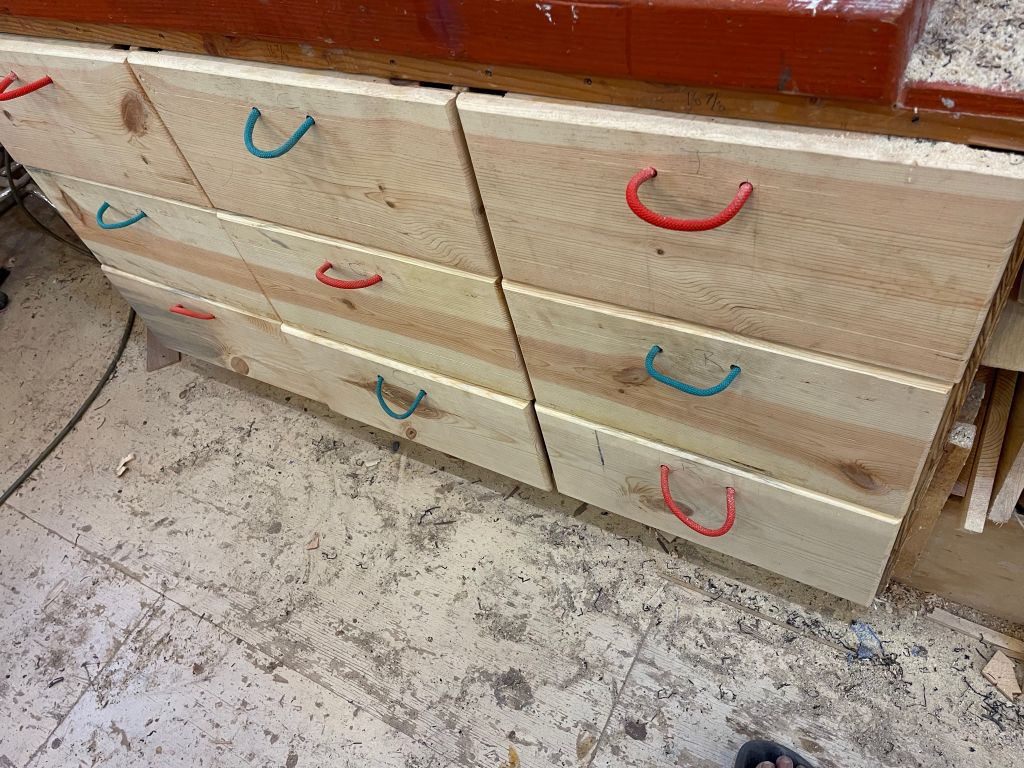 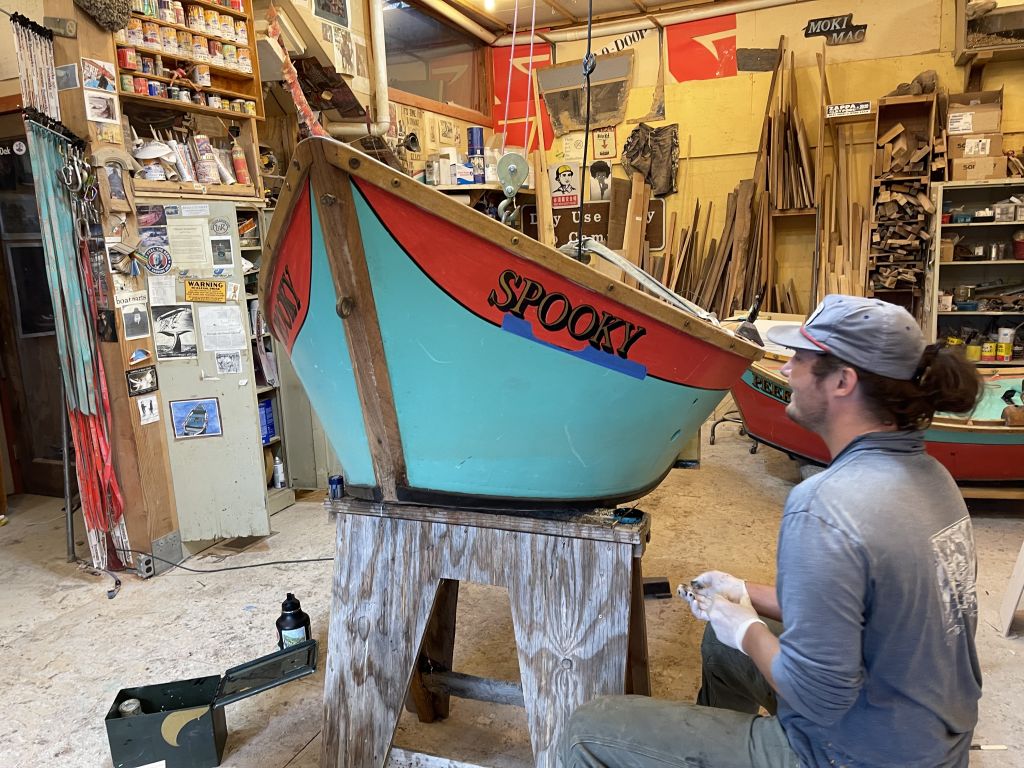 The back trail between shop and house has been narrow and uneven for a little too long. So I launched into another simple afternoon project that lasted most of a week. 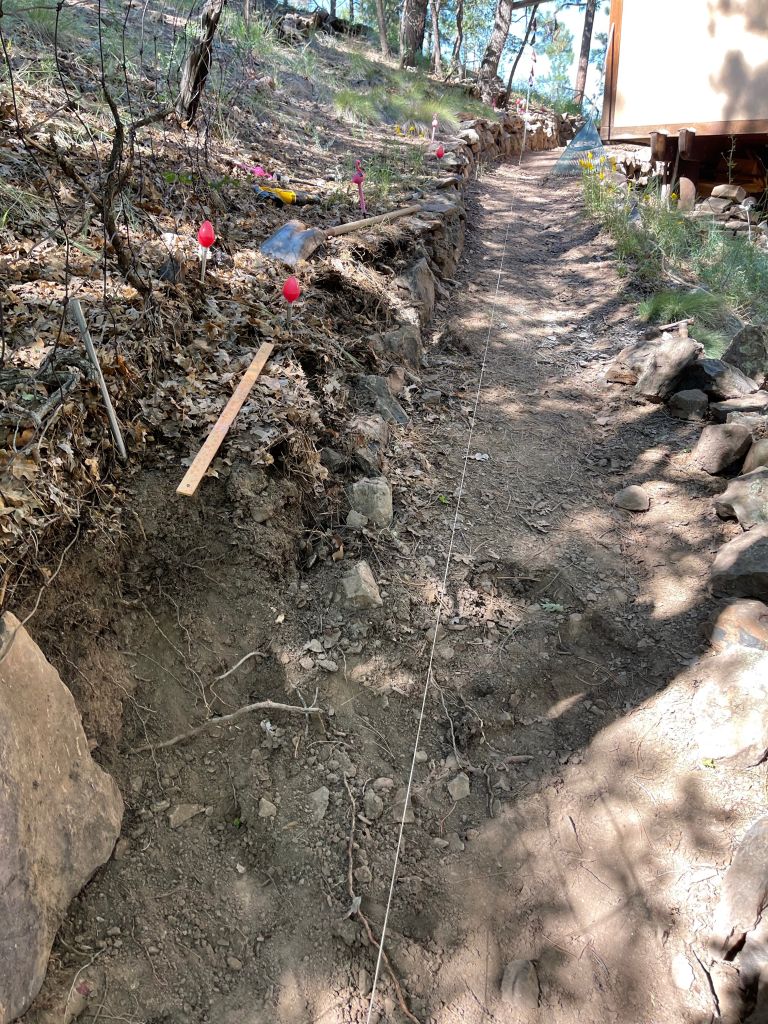 I’m beat. But my snowblower is going to be way happier. 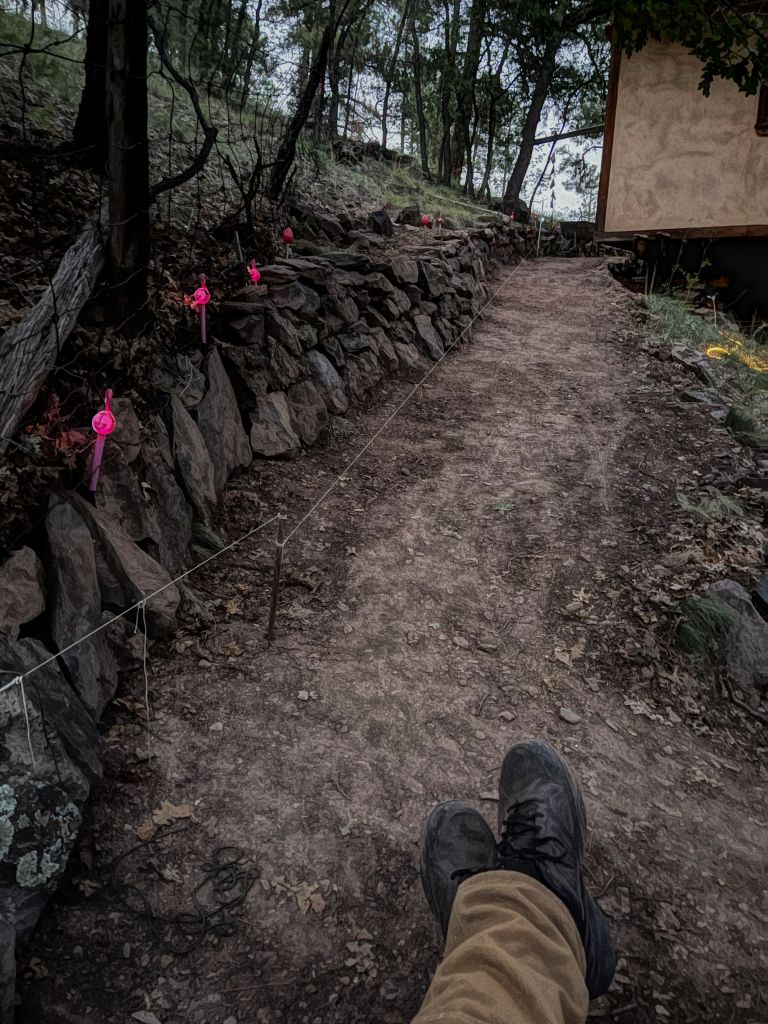 Margeaux brought by a destroyed door that would have been way easier to replace. But there is sentiment involved so we restored it. 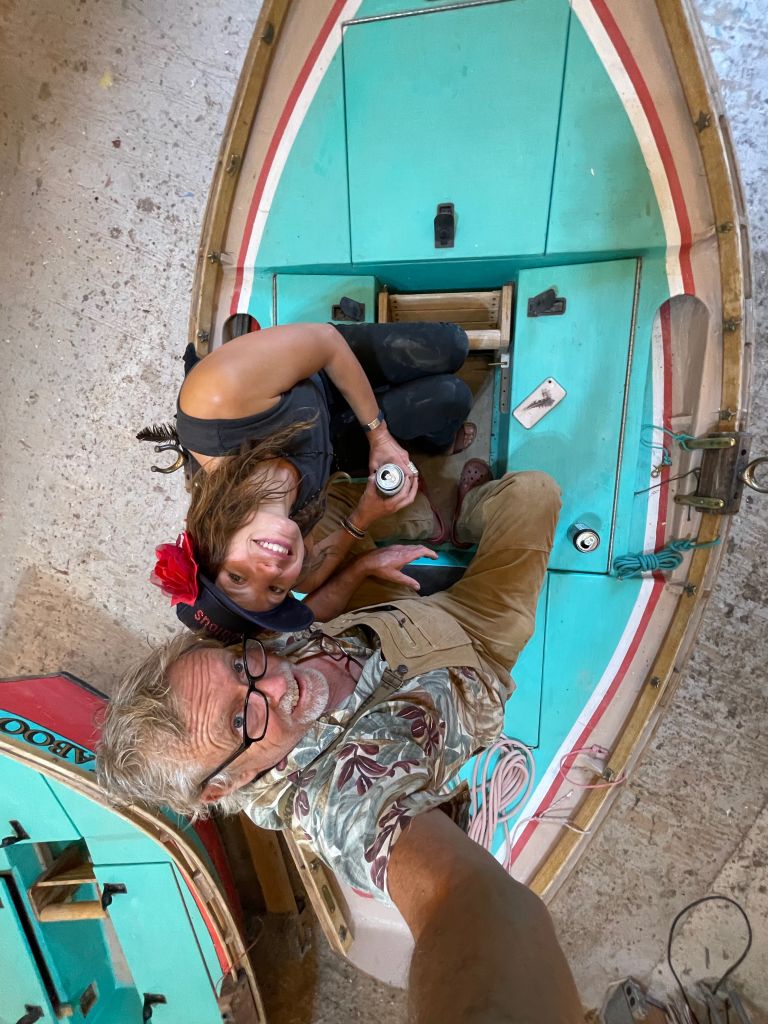 Then it was back to the river. I rowed Diamond Desert, the new wide-bodied 15’6 variation on a Briggs Grand Canyon Dory that we built last winter. Brin, who we built it with and for, was generous enough to let me take it out for a spin. In the foreground is Stands With Fists, built my a student of mine, Charlie Gagne. He learned well! 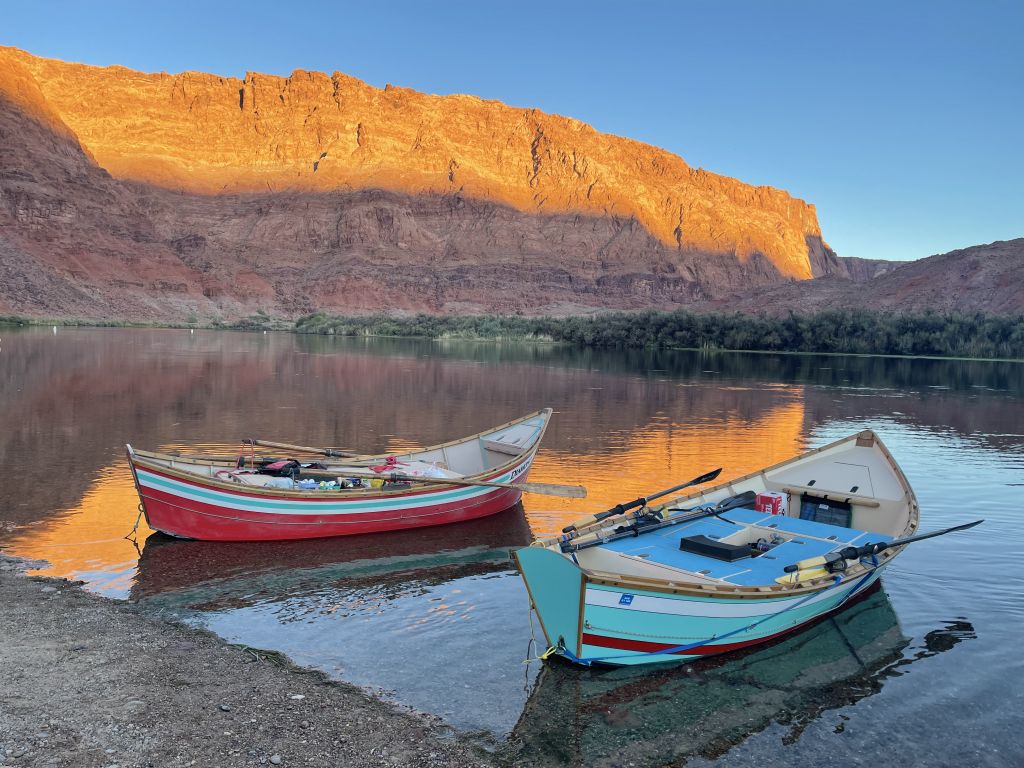 I spent a lot of the trip playing with my new telephone, an iPhone 12 Pro Max. It’s way smarter than I am. 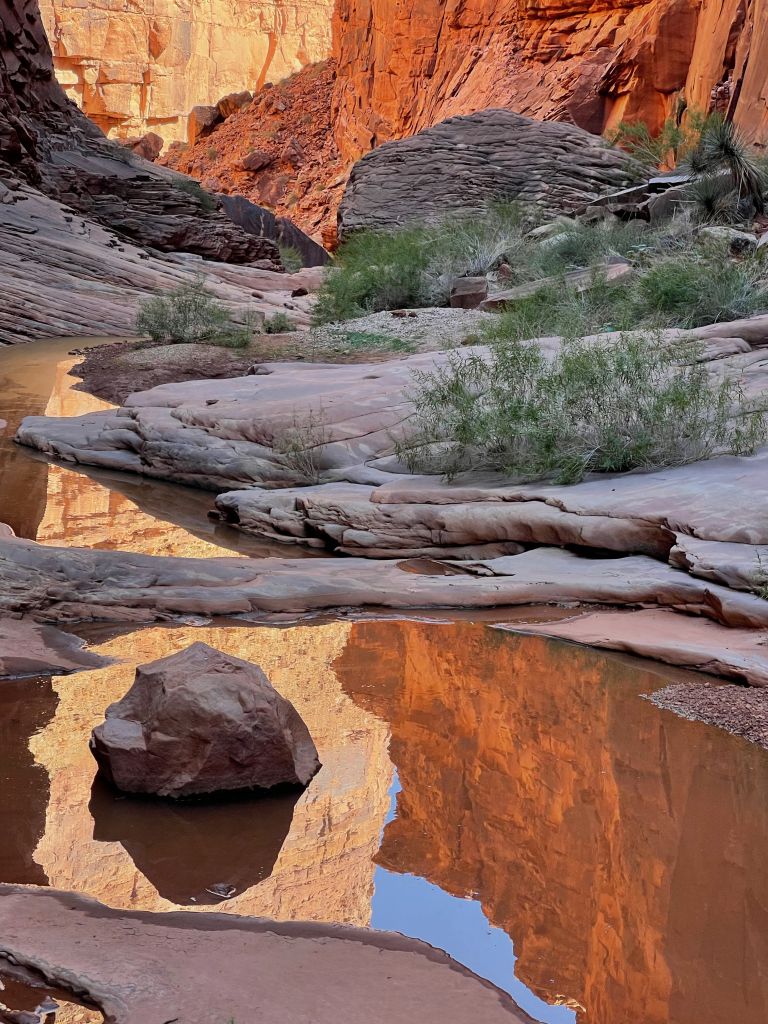 VK’s dad Kyle came along and played some sweet music with Cricket.I worked for Kyle back when his dad owned the company in the Pleistecene. 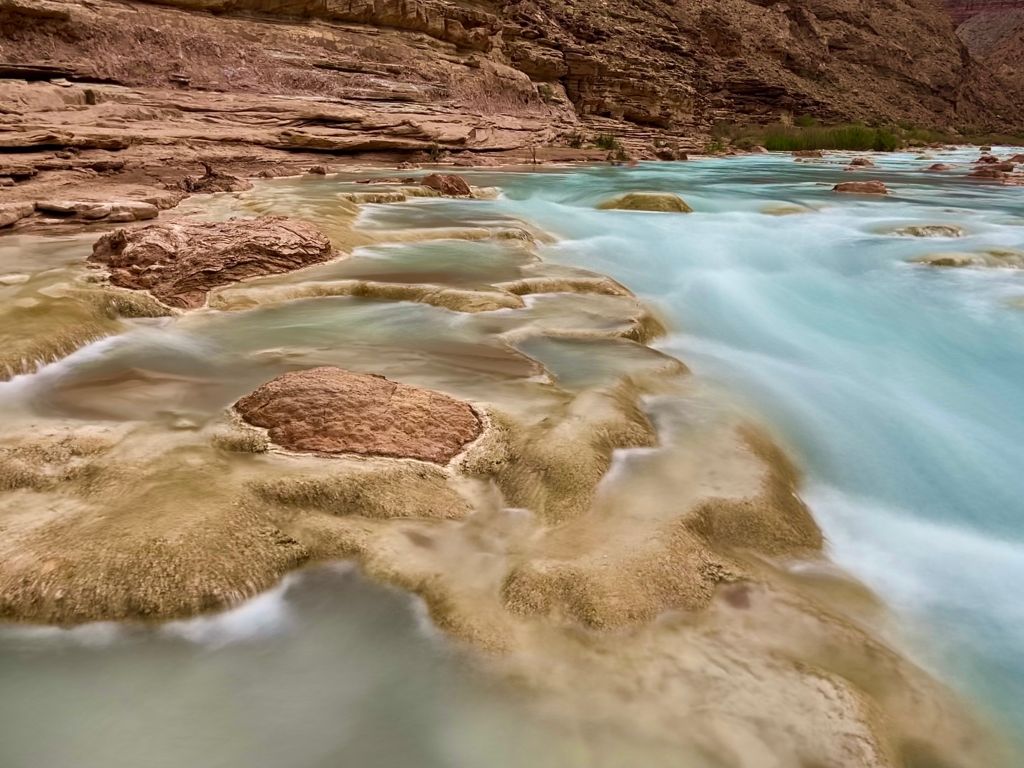 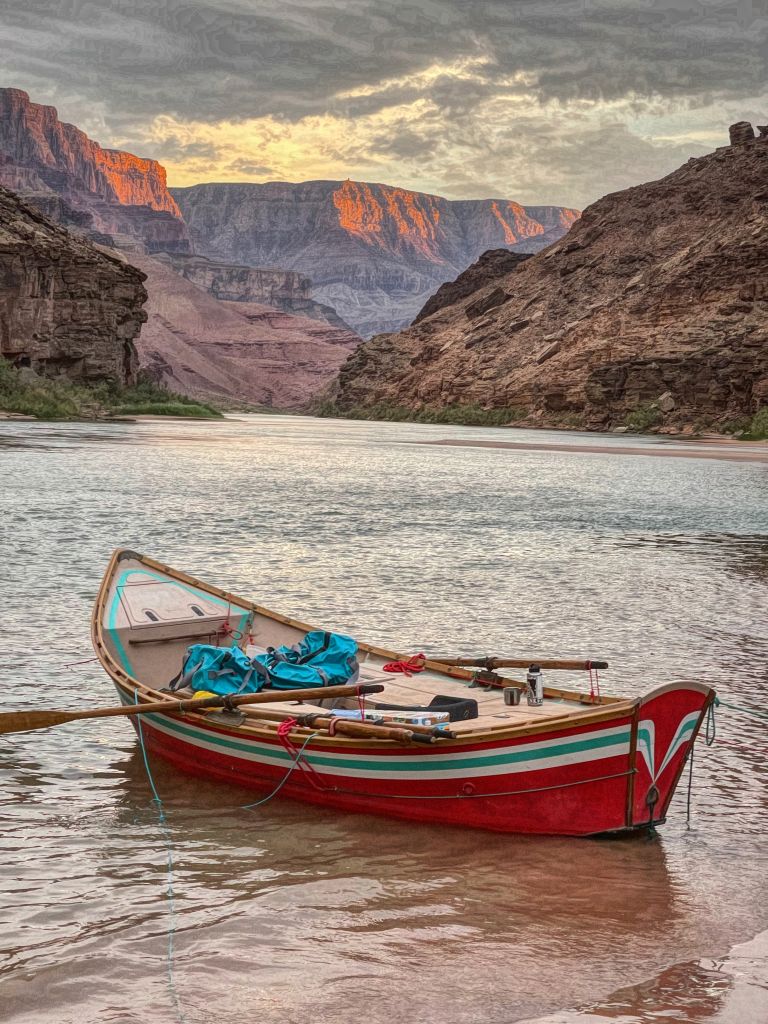 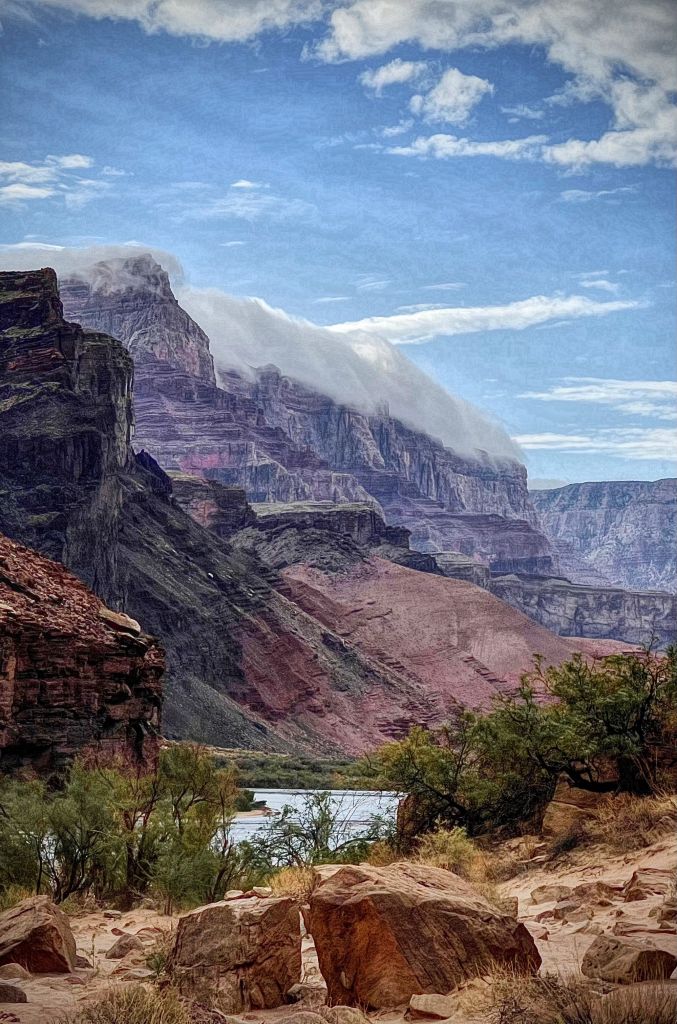 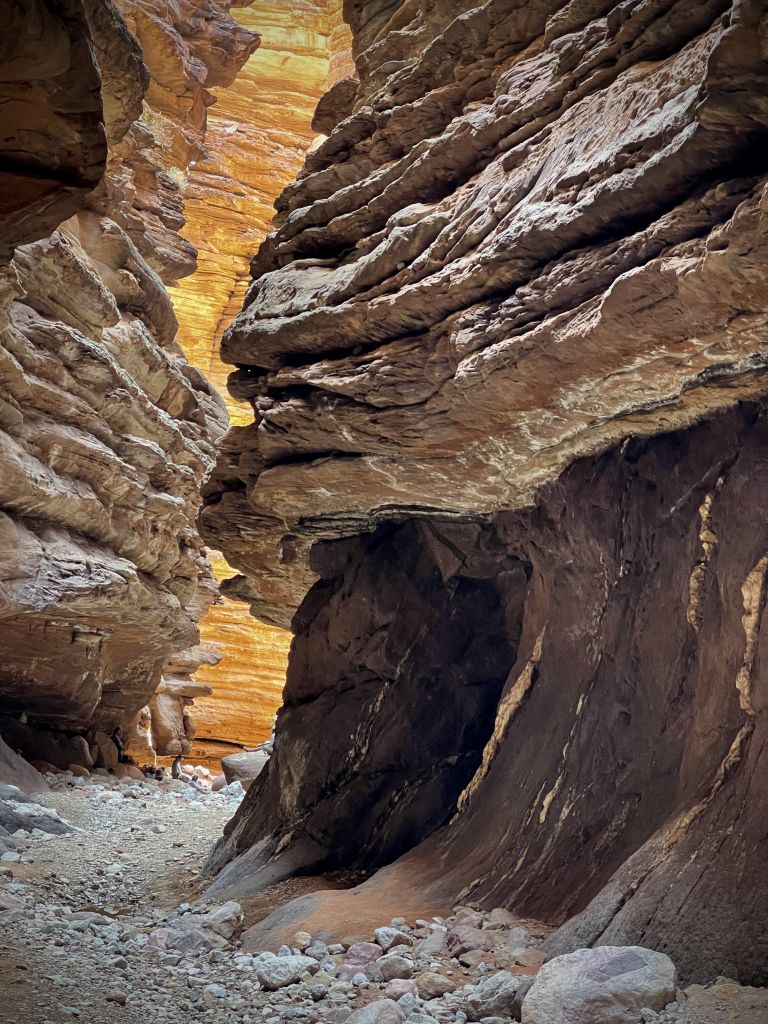 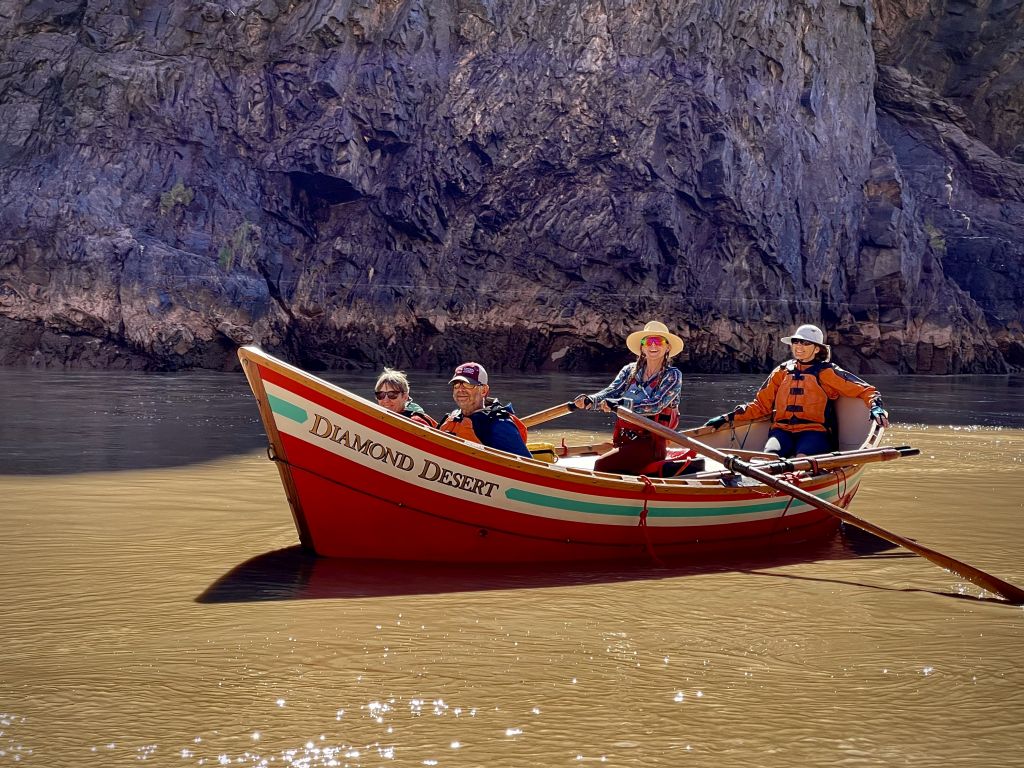 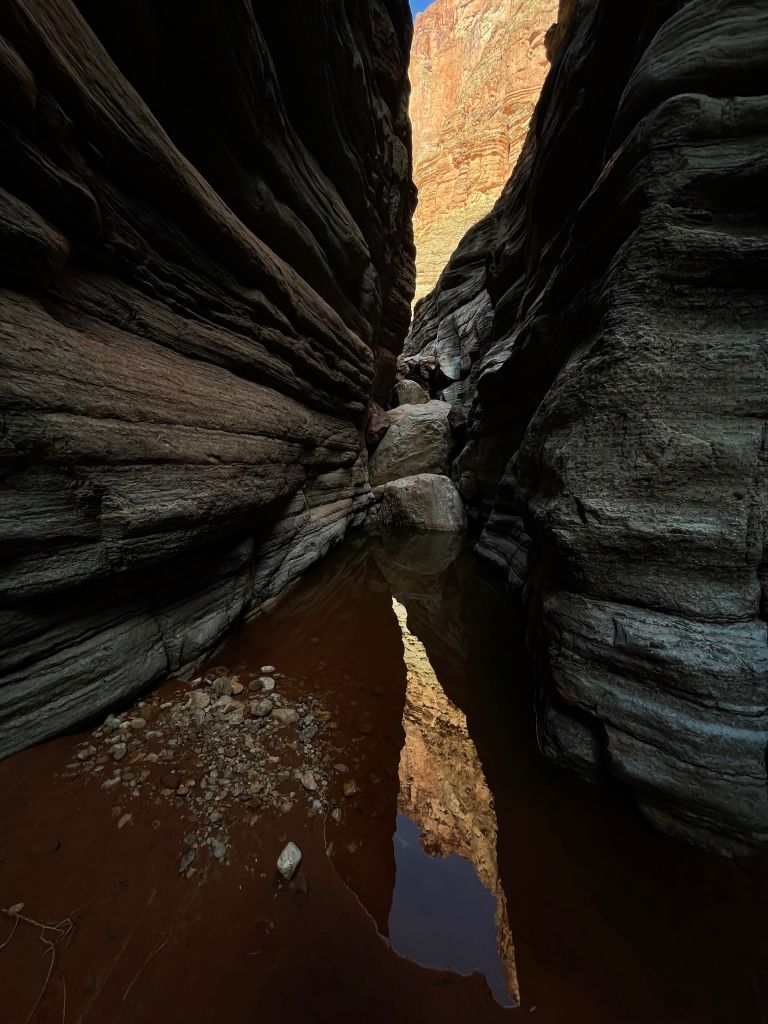 Here’s me trying out a new cowboy hat that Jose at Spur Hat Company build around my head. He calls it “The Boatman.” Pretty sweet. 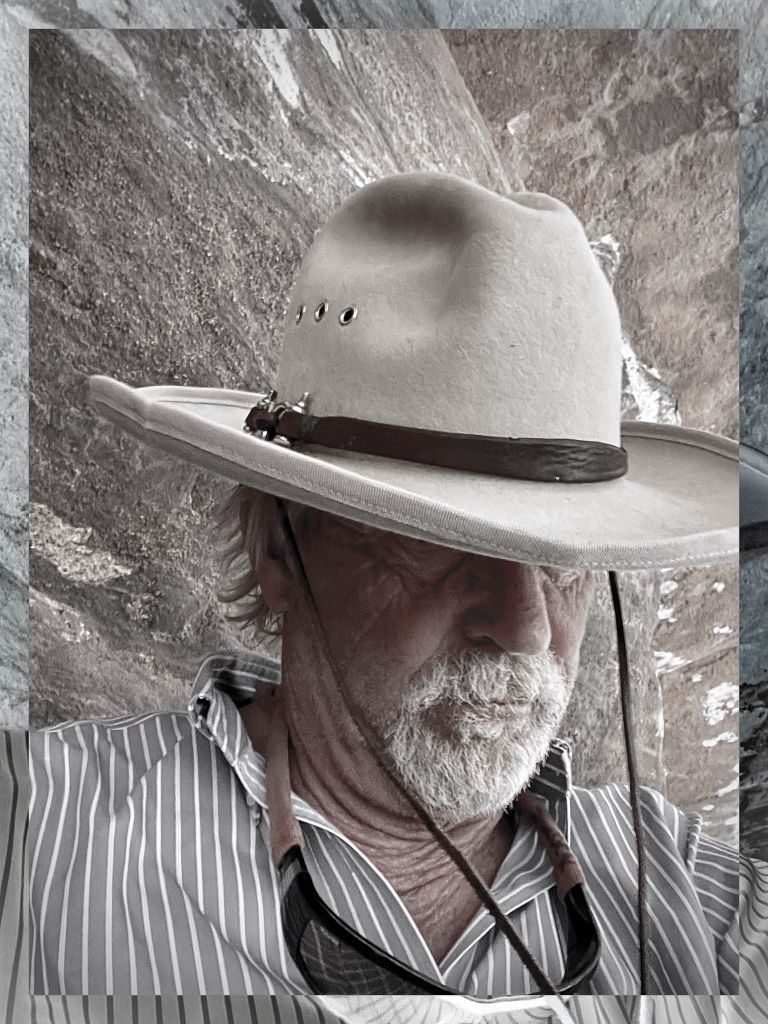 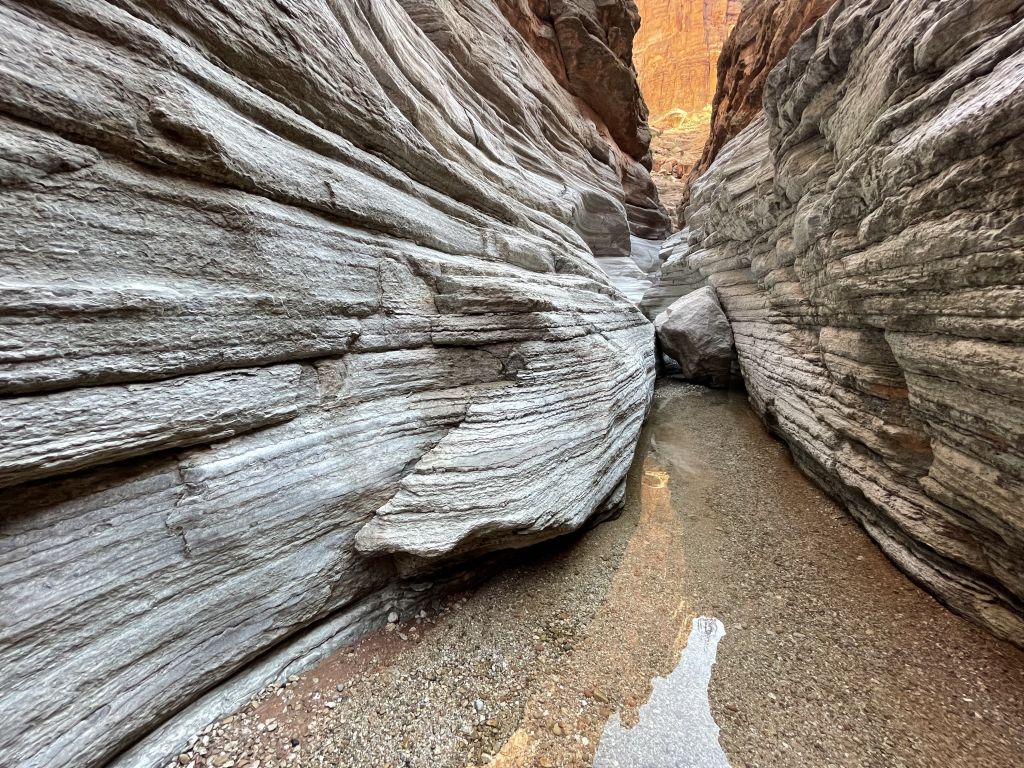 My favorite Canyon view: Lava Falls from Tequila Beach, after one more trip through. This was my first run of Lava in the last three that I didn’t flip. Flip or no flip, being here calls for liberal infusions of the beach’s namesake. 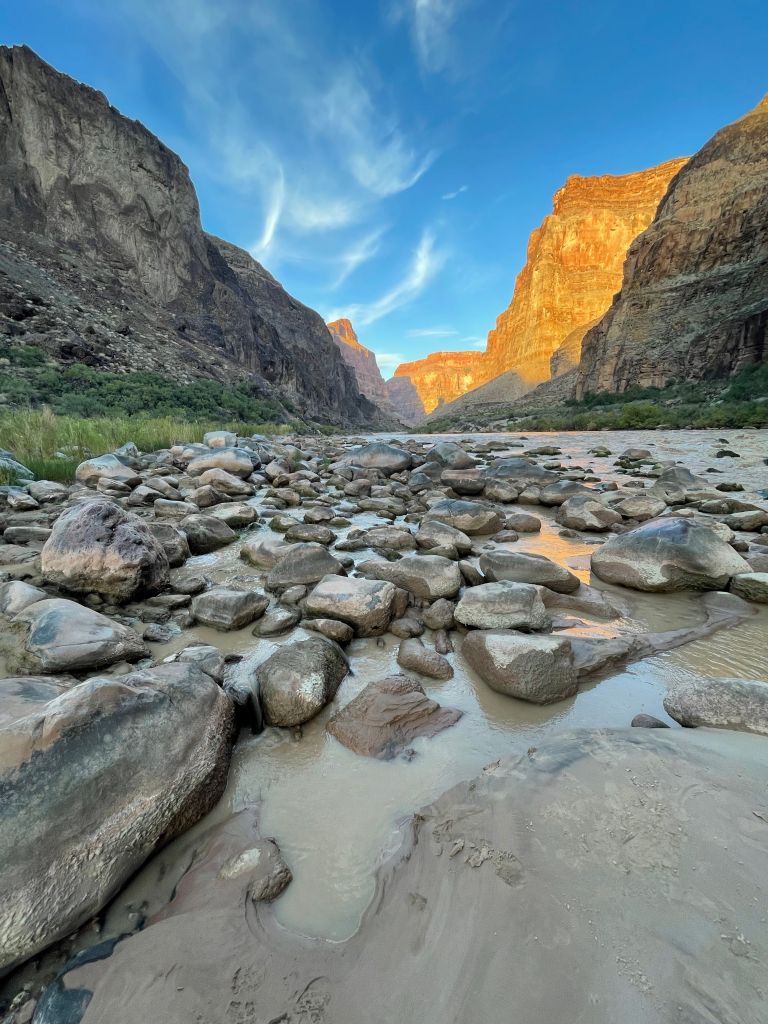 Check out the sweet cake the crew baked for me. This trip marked the fiftieth anniversary of my first trip in 1971 as a clueless Prescott College freshman. I’ve missed two years of being down here since then, so I have to keep going for a couple more summers. But I’m still clueless.

Fate helped celebrate this trip by adding a couple significant passengers. In these fifty years of boating, hiking, and skiing the Canyon, I’ve been cited for doing each of those activities without a permit. Two of the three citing rangers, now retired, were on this trip, and one of them hired the third citing ranger. 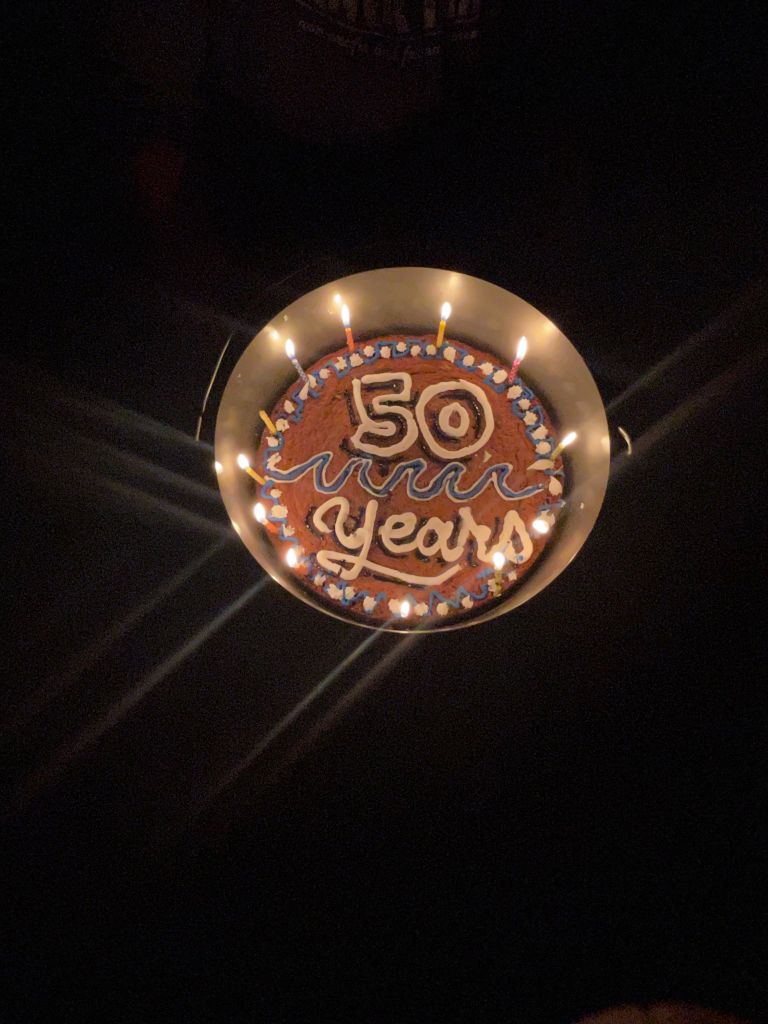 Not being one to sit around and savor the summer’s events, I jumped in to another of my manic commitments–pulling together a gigantic display of hulls of the Colorado for the Colorado River Basin River History Symposium in Kanab. I was only in charge of hauling ten of the sixteen boats. Thanks to Dan Dierker and a host of others for moving all these beasts. The biggest project was retrieving and hauling the 21′ IMAX Powell boat. Dang she’s heavy. I got to captain this one through Grand Canyon in 1999. 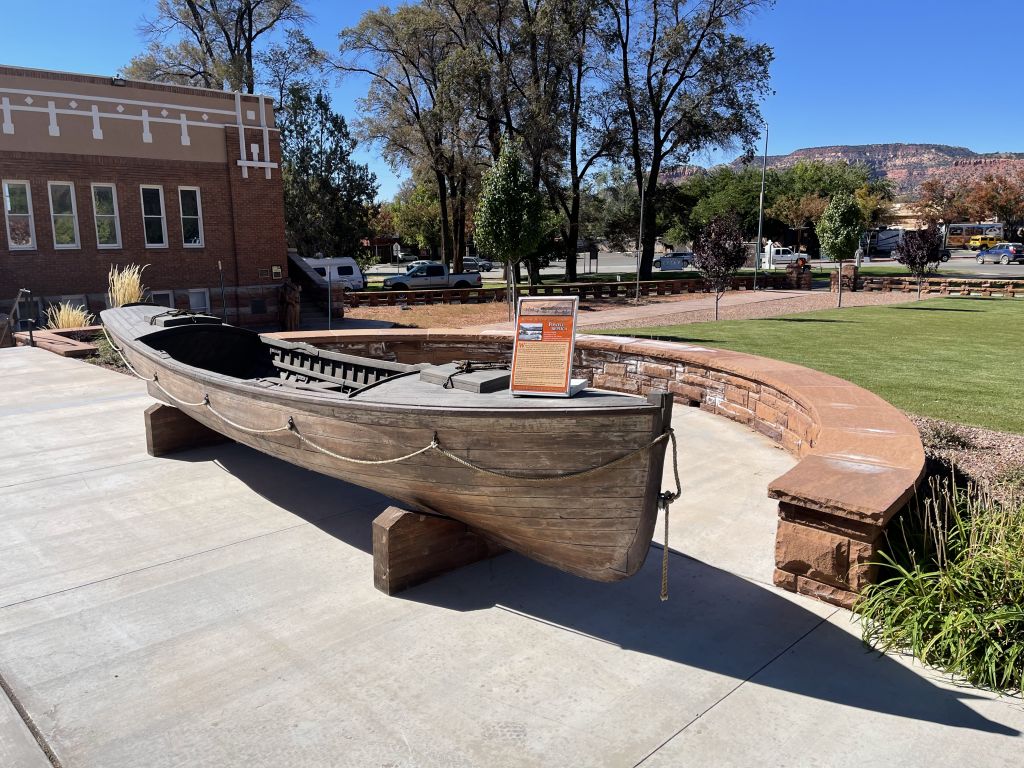 My replicas of the Kolb Brothers’ 1911 Edith, and Buzz Holmstrom’s 1937 Julius F. I’ve also had the (pleasure?) of running these through the Canyon. Edith is brutal, but Julius is pretty sweet. 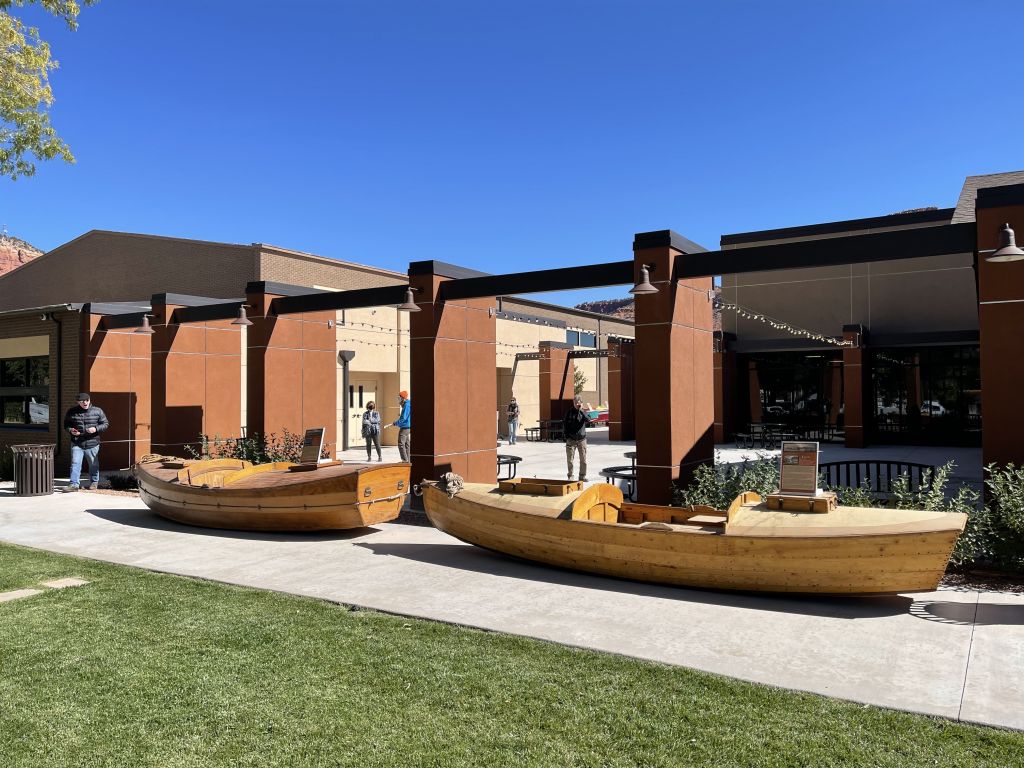 A full suite of Nevills boats and their offshoots–MOE, my Nevills Cataract boat is barely visible at the far end. She’s a wet thing to row. Then three Reilly/Mortenson variations, none of which I’ve built or rowed. That yellow thing is our Bert Loper replica. She’s huge but rows okay–except when I flipped her in Lava. In the foreground is a Nevills San Juan punt, Boxcar. She’s an open boat, so not a great one for Grand Canyon. But this design was the basis of Moulty Fulmer’s GEM, one of the boats that couldn’t make it to the show. 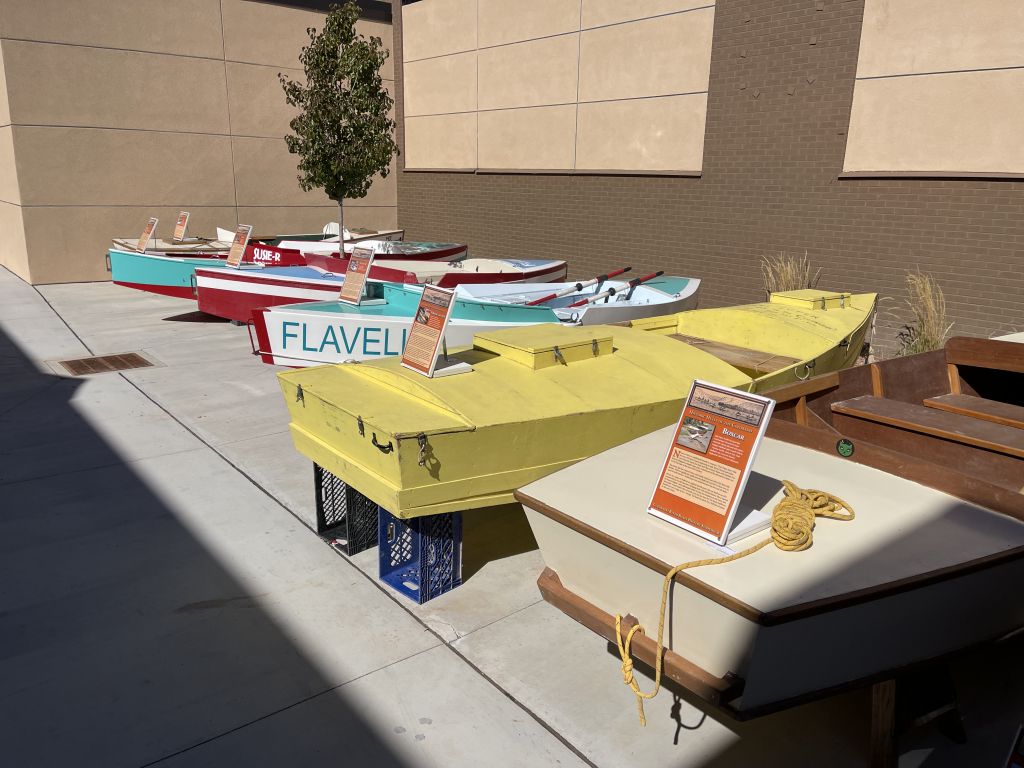 And a full suite of Oregon drift boats, which we like to call dories. Just beyond Betty Boop you can see the wooden gunwales of an open McKenzie, Juan–a 1948 design upon which most other Oregon boats are–to some extent–based. Then Betty Boop, a 1967 original decked McKenzie; the Hetch Hetchy, a 1969 decked McKenzie variation which was part of Martin Litton’s early commercial fleet. Portola is a replica of Martin Litton’s first 1962 dory. Tatahotso is a 1974 original Briggs Grand Canyon Dory, the gold standard for whitewater boats for the last fifty years.

Diamond Desert in the foreground, is our 2021 pudgy entry into the boat-of-the-future contest. And the shadow at the bottom of the picture is of Spooky, one of my 9′ Doryaks. With the dire drought predictions getting worse each day, perhaps this is actually what we need to be building more of. 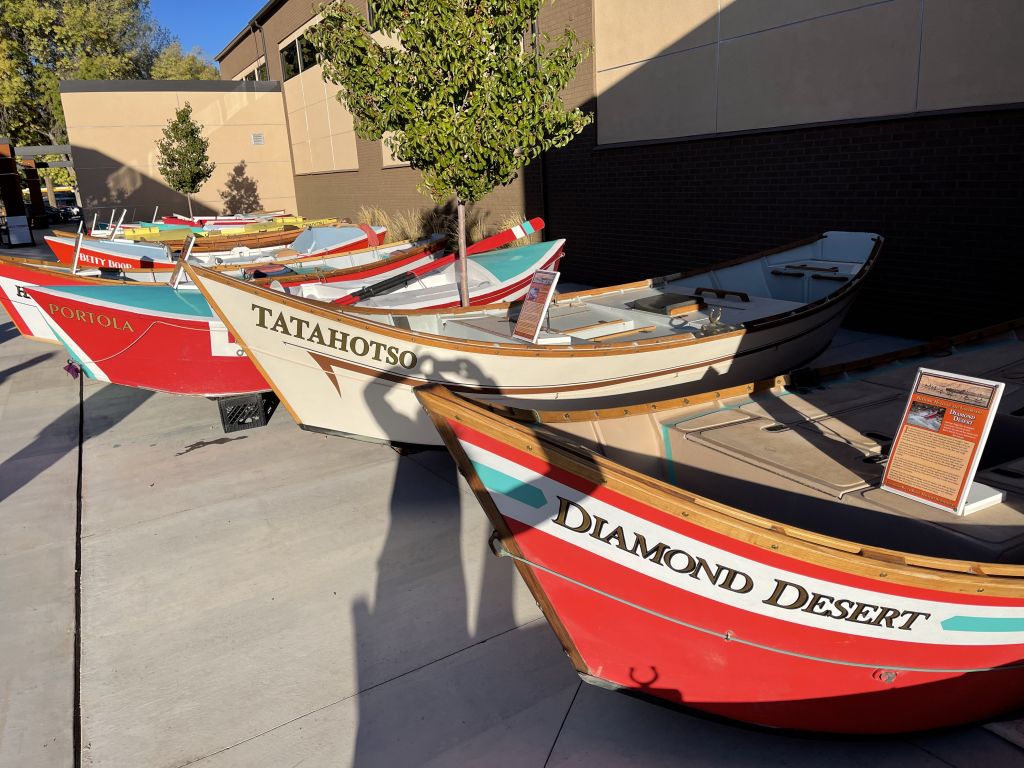 This weekend I made a trip to Bluff, Utah, to celebrate the life of Charlie Delorme, who ran Wild Rivers Expeditions for many years and introduced me to a wonderful community and many amazing places. We are pretty sure Charlie was in charge of the decor and lighting. 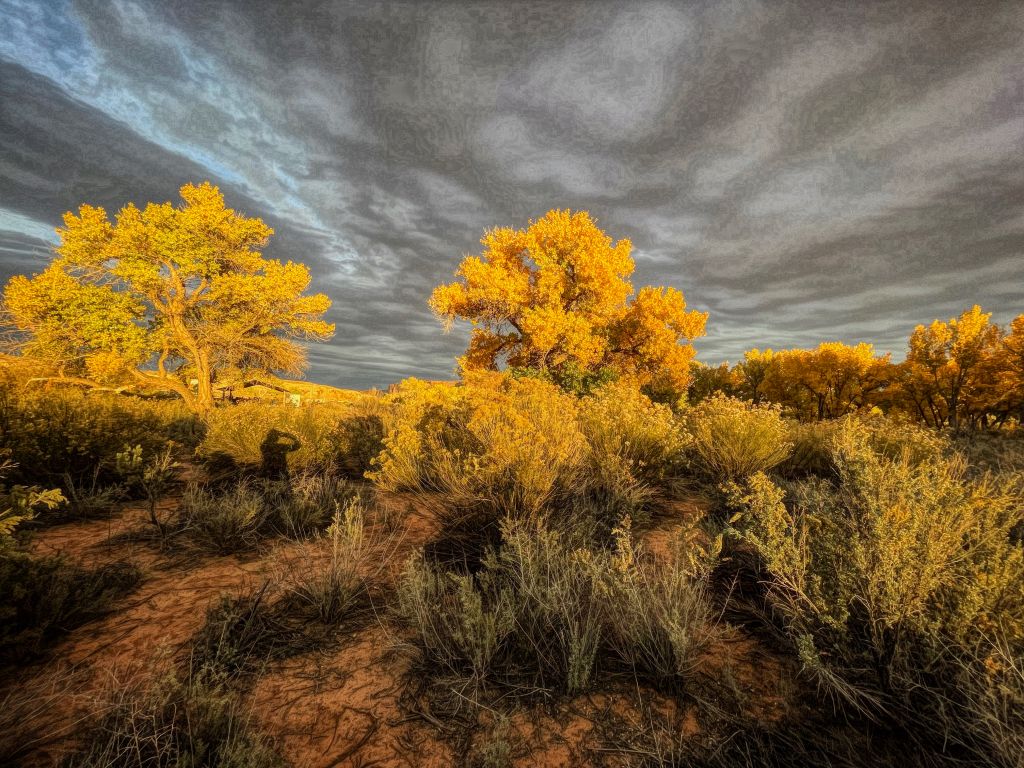 Then over the mountains to take Diamond Desert back home. I guess fall is about over. 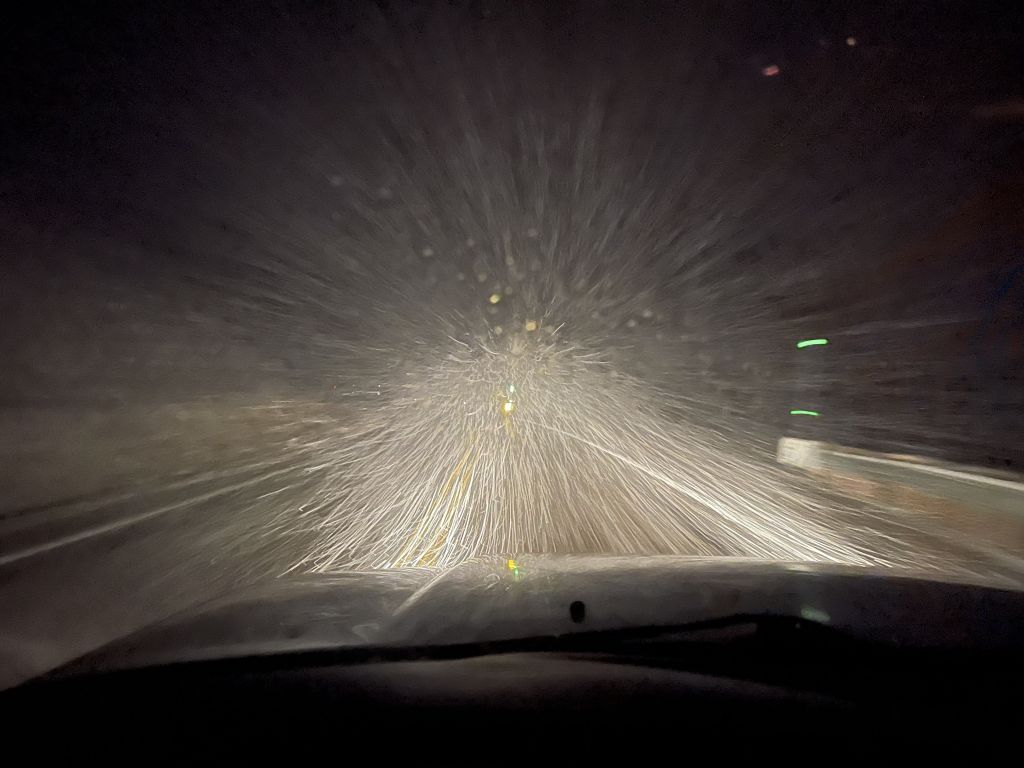