In late September Grand Canyon National Park released a few private trip permits to the first callers after 7 AM. After 387 calls, I was the first. I guess they got to the office a little late. Anyhow, we suddenly had two weeks to assemble a private trip. We decided on all wooden boats. No rafts, no coolers. Old school. Up until the day before the trip it was going to be 5 dories and 4 doryaks. But a last minute illness took out one of our dory drivers, so in order to accommodate 22 days worth of food and gear, I turned my doryak over to some brave folks and switched to–not a dory–our replica of Bert Loper’s boat. Great idea. 18 feet long, oarlocks way behind the center of gravity, and 8′ oars. What could possibly go wrong?

Amazingly, we were able to pull the trip together and headed downriver after lunch on October 11. Ed Moss happened to be onNavajo Bridge and sent a couple shots of my boat a we passed beneath: 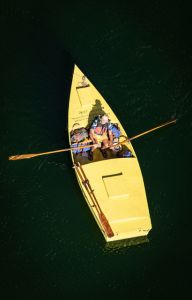 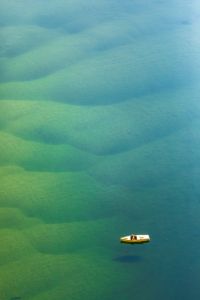 Wonderful weather accompanied us for most of the trip. 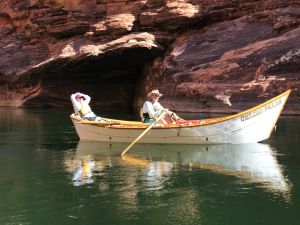 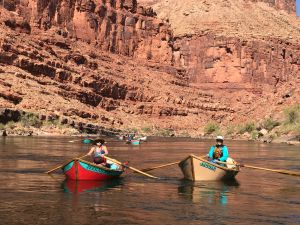 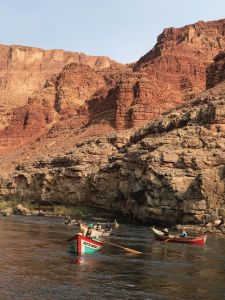 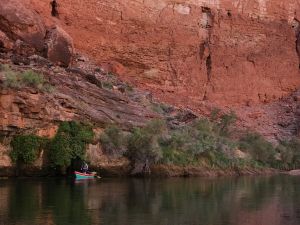 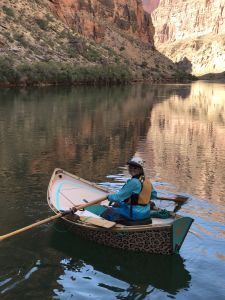 Although I offered to trade boats with folks, only a few took me up. And not for long. 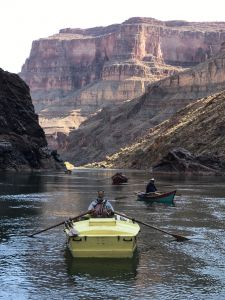 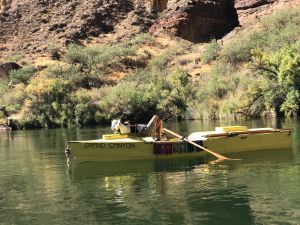 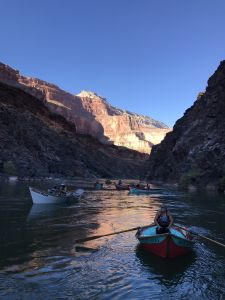 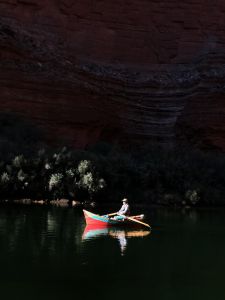 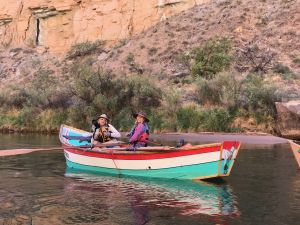 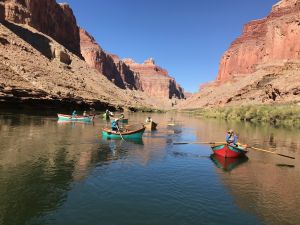 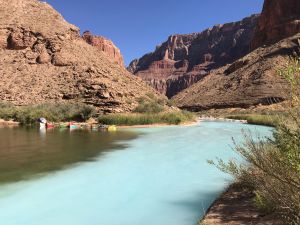 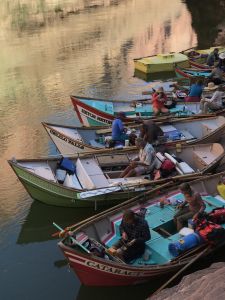 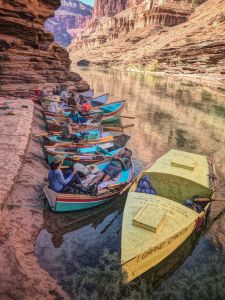 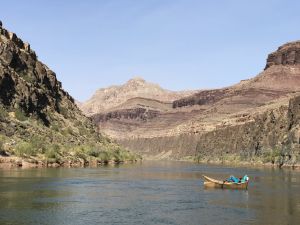 Fortunately for me I had assistance packing the cavernous hatches of the Grand Canyon. 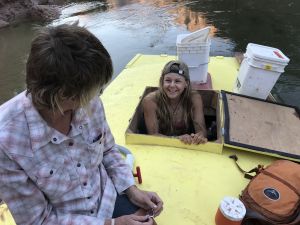 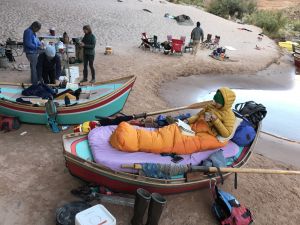 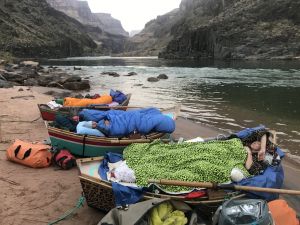 Things went quite well, considering the odds. The doryaks decided to baptize the new oarsmen–flipping 5 different rowers, once apiece. And a couple of the big dories decided to see it they could win battles with rocks. The rocks won.

The Loper boat turned out to be surprisingly adept at tracking down the current lines, easily keeping up with the pack with a minimum of effort. Ryann accompanied me through 24-1/2-Mile Rapid, where Bert Loper flipped the original boat and was lost beneath the waves. “Look to your oars, Brad!” As luck would have it I didn’t flip or die.
Pivoting was not this boat’s strong point as I found out at Lava. And man, what a wet boat. Every wave that a dory bobs gracefully over, the Grand Canyon plunges beneath, and one gets a second or two of watching the wave roll down the massive deck and into one’s face. In the end, she seemed to have qualities of many of the other replicas I have run, including the sweep scow. But back to Lava.

I opted for the left run and hit it pretty spot-on. But there’s this one quick pivot necessary to navigate the run successfully, and Grand Canyon preferred to pivot slowly, and in the wrong direction. Bloop. Over. 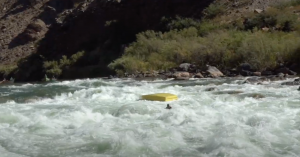 It was a colorful and sparkly swim–not all of those rocks are black. I climbed on top of her as quickly as my aging carcass would allow, attempted to right her a few times, then rode her, upside down, into Lower Lava. I never suspected there was an eddy between those waves and the wall large enough to hold and spin an 18-foot boat. But there is. Rick Routh, on a private trip observed the chaos and sent me a couple photos. Here I am surfing the wall. That went on for seconds, or minutes, or hours, I’m not sure. But the boat, somewhat shredded and oarless, washed out by and by. 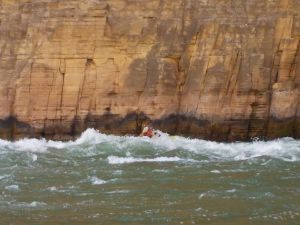 Here’s Cricket leaping to the rescue. Our combined weight brought the boat up quickly. 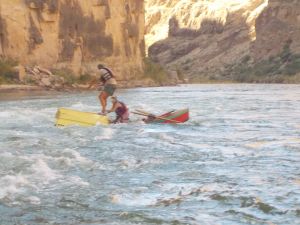 After which we dragged those of us who were below camp back up to Tequila beach and celebrated as hard as we could.

At Diamond Creek three more dories and six friends joined us. I’m not sure how long it’s been since twelve wood boats ran together. But it should happen more often. 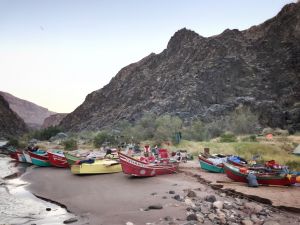 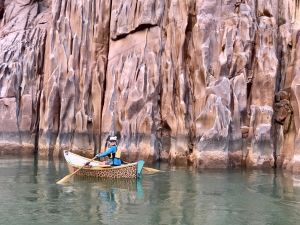 Here is RJ’s shot of our motor armada across upper Lake Mead–4 three-packs putting along. 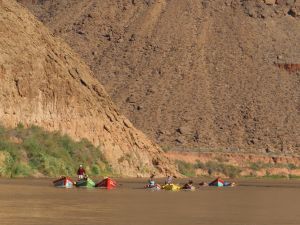 Halloween and a Blue Moon on our last night out, and home at dark the next day.