It’s a delicate process. Take off too many pieces at once, or that one wrong piece, and the Hetch Hetchy will fall to bits. So now we have the rotted end panels pretty well affixed to the new bowpost and transom, and the boat somewhat twisted back into shape. I think we’re solid enough to go after the rotted right side.

Wouldn’t you know it. Keith Steele went ahead and nailed the outer gunwales on. With boat nails: little barbed bastards that will not come out until the wood rots away around them. They just break when you try to pull them out of solid wood. And, oh, he also glued the gunwale to the sidewall throughout the hard bend in front. These techniques work fine when you’re jamming out a boat. Quick, clean, and looks fine. But for the poor sonofabitch that has to do the repairs, it’s a nightmare. Pat is carefully jig-sawing his way between the gunwale and the sidewall here. (End of rant.)(For now.) 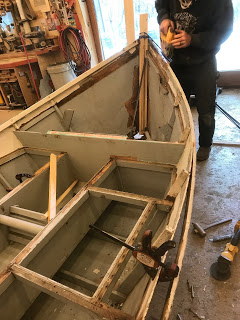 The bolts at the rib stations all rusted in two. Pretty easy to just twist the remaining parts out each side. Now with the gunwales off we can assess the ribwork. Most of them are fairly sound. We end up replacing three and scarfing new tops on about five more. The rest are fine. 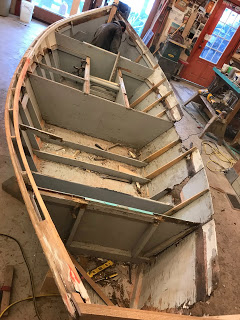 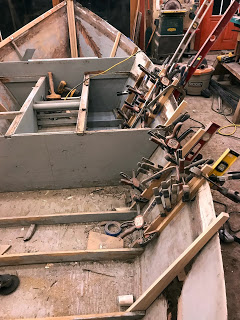 But I’m thinking this side panel has done its duty. 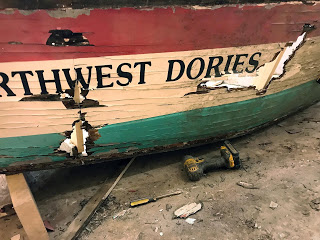 There’s a good story about this front end damage. 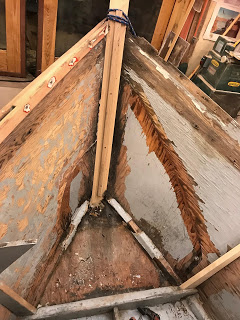 1972. “That’s the third boat of Martin’s I wrecked!” recalls John Blaustein. “I hit in the hole at the top/middle of House Rock.  I went straight over the “hump” of water just above the hole and plunged dead-on into the hole.  There is a rock down there!  I hit the bow-post and it splintered it, along with the floor and parts of the sides.  You could open the bow hatch and crawl right out the front of the boat.  Pretty bad!  The boat and I were in pretty bad shape that afternoon and next morning.” (Nice warming fire!)

And just a scant 47 years later we’re going to fix it. 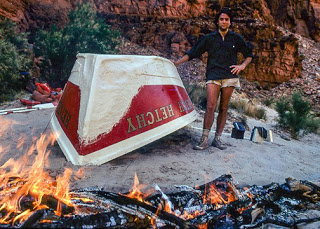 Laying up a new side panel on the floor while the boat waits off to the side. There wasn’t enough of that side’s gunwales to save, so we cut new Port Orford cedar ones and steam them up, clamp them on. This gives us enough strength to roll her over. 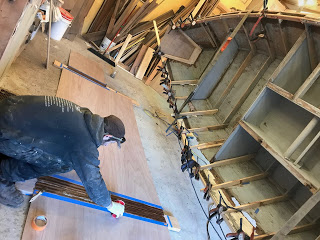 Gunwales off again. We were amazed to get that rotten sheet off in one piece. 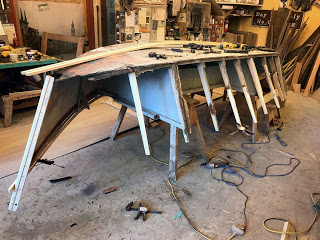 We carefully transported it over to the lofting table to make a pattern. 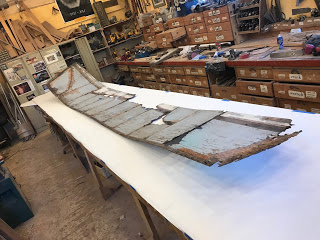 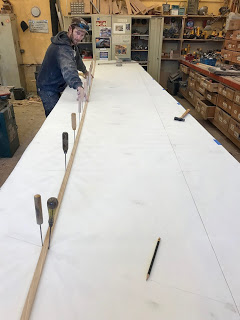 With the shape and rib placements recorded, we install a new piece of wall art. 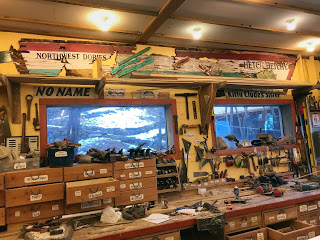 A new side panel is born, lines drawn, holes offset, drilled, and countersunk. 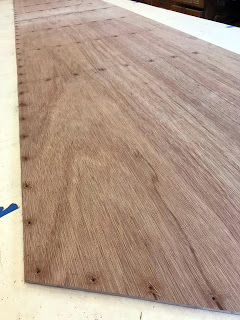 On with the icky sticky pooky. 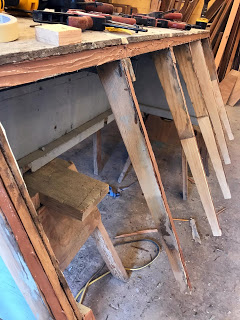 And she’s a boat again. Sort of. Closer, anyhow. 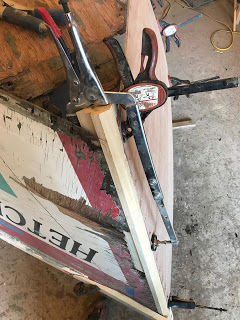 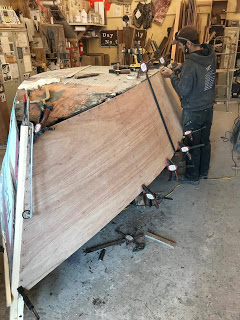 Gunwales clamped on again, and up she rolls. 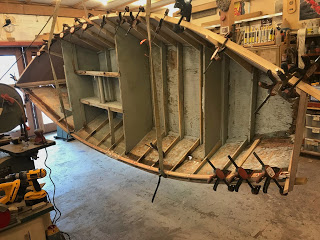 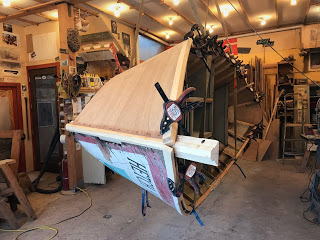 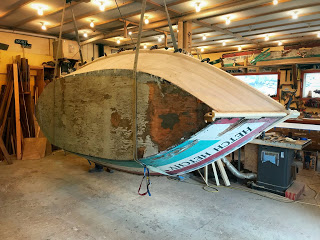 Although the left side panel is in good shape, its ends are not. Time for a little scarf work 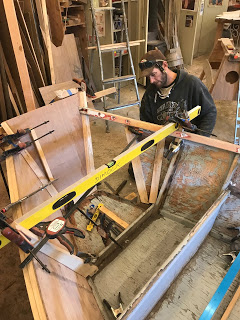 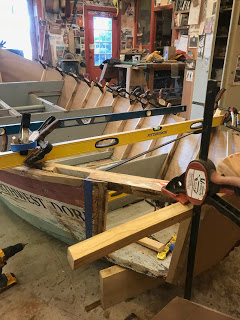 Off with the old, on with the new. 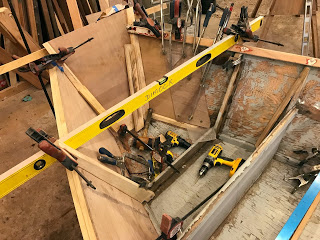 Cricket is checking to see if this is going to be her boat. 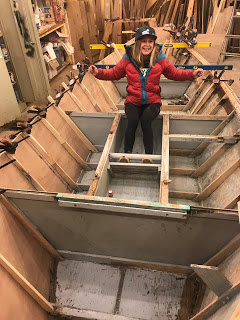 Off with a bit of the bow. For as funky a patch as this was, I’ve got to say, it somehow lasted a very long time. 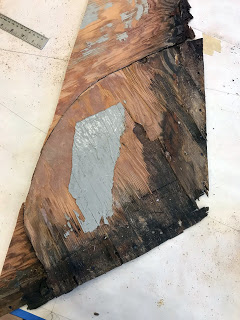 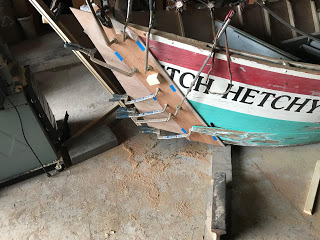 A new front end. And it’s even straight. 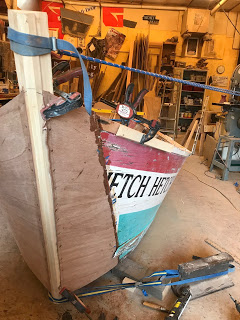 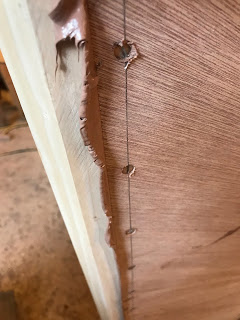 Scarf on a few new gunwale ends and voila! Note: we were able to peel back the rock guard just enough to scarf the new side in under it. 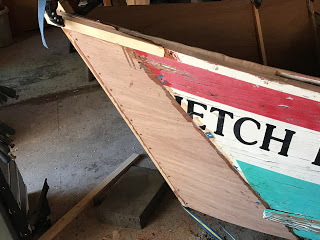 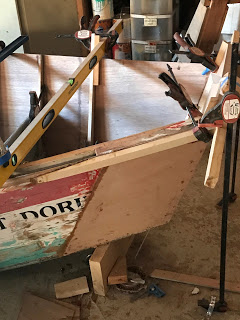 If you’re really serious about restoring the Hetch Hetchy, you gots to wear the proper hat. 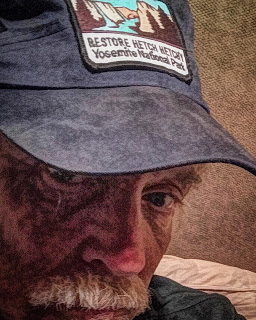 So here’s the quandary. Why don’t we replace everything? Or if we’re going to do that, why not just build a new boat? It would be a lot easier. And faster. And cleaner. And would make for a stronger boat. Thing is, we are trying to resurrect this old piece of history. Every original part we can save is some sort of victory. Isn’t it? Or is that just goofy?