brdfrd2020-12-18T04:06:33+00:00November 15th, 2018|News|
When Martin Litton first brought Oregon drift boats to Grand Canyon in 1962, he went to Leaburg, Oregon boatbuilder Keith Steele. Steele built two 16′ drift boats which, when decked over, became the forebears of what we today call the Grand Canyon Dory. By the mid-1960s Litton was running a few trips a year for friends, journalists, politicians—anyone he thought might help fight for the cause.

At some point–I am currently trying to find out when–most likely 1969-70–Litton needed more boats and had Steele build three more, these ones being about nine or ten inches longer than the originals. He named them Malibu Canyon, Diamond Head, and Hetch Hetchy.

In 1971 Litton switched brands, going to a Rogue River style drift boat designed by Jerry Briggs of Grants Pass. The prototype, Emerald Mile, is now well known due to Kevin Fedarko’s book of the same name. By the time Briggs threw in his saw and hammer in 1982 and went to aluminum, he had crafted some thirty-six Briggs hulls, most of which went to Martin Litton, and all but one of which, to my knowledge, are still afloat.

But back to the Steele boats. The 16’9″ Steele hull is now an endangered species. The Malibu Canyon was sold to local Idahoans several years ago and subsequently smothered with a fiberglass chopped fiber gun. Most likely its wooden soul quickly perished. There were five others built for private boaters Fred Eiseman and Malcolm McKenna. Of those, Maggie has rotted away, Hosteen sits gutted in a Salt Lake City garage, Pris and Ratrun are slowly decomposing, leaning against pine trees in Nederland, Colorado, and but one, Estsan, is re-outfitted and occasionally used by the Quist brothers.

Which leaves the Diamond Head and Hetch Hetchy. They served a few years for Litton in Grand Canyon before being displaced by the larger Briggs boats. They were shipped to Idaho for Litton’s operation on the Salmon and Snake Rivers and served many years up there. They were finally retired and eventually began succumbing to the elements. Manager Curt Chang sent them to a fellow named Dutch in Victor, Idaho in hopes they could be restored. Perhaps they could, but Dutch already had a pretty full plate. So Curt contacted me.

I gave my boatbuilder-brother-from-another-mother Andy Hutchinson a shout. How about we each take one and restore it? Only then can we row them and see just what the missing link of Grand Canyon Dories was about. And by and by, if we haven’t fallen in love with them, we may look for suitable new owners who will honor their heritage, row ’em, wreck ’em, fix ’em, and row ’em some more. And store them INSIDE god damn it. If we can figure out when they were built, maybe we can get them ready for their fiftieth birthday. Or maybe we missed that.
It wasn’t too tough a sell. I headed up to Andy’s last Thursday. On Friday we visited Eddyline Welding in Moab, where Mike, Bob, and the gang are creating some new designs Mike and I have been collaborating on. Wait ’til you see the Chub–13’6, and so plump in the middle I can hardly stand it. The ultimate Westwater dory. They are also making a third dory off my Bears Ears design for AzRA’s fleet.

On to Green River where we checked out the wonderful exhibit: Glen Canyon: A River Guide Remembers. You gotta see it. It was put together based on Ken Sleight’s career–he turns 90 next year!–with contributions from many familiar river folk. Kudos to Ryann Savino for seeing it through.

On up to Jackson for the night with our boatman friend Bruce. In the morning we climbed over Teton Pass and found Dutch’s shop. Dutch is honeymooning in Hawaii, so AJ DeRosa came by to help, as did Amber Shannon, who is midway through restoring Copper Ledge Falls, an old Briggs boat in the shop.

And here they are. A bit worse for the wear, but still kinda sexy. (Kinda like Andy and I would like to think we are). In the background are some cool vintage drift boats from Kaarhus, Hindman, Heater, and Steele. Dory geek heaven. 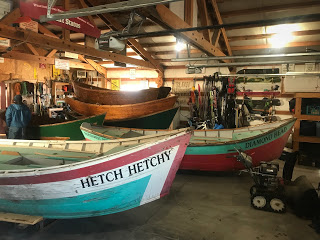 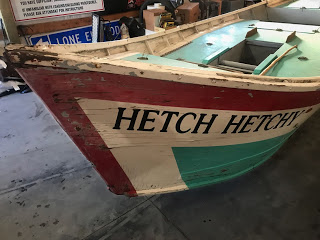 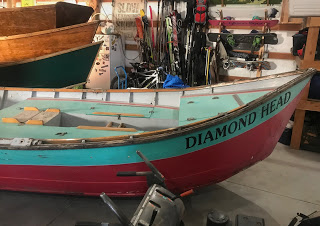 Okay, so, yeah, that’s moss growing out of the paint crack. There may be a few rot issues here. 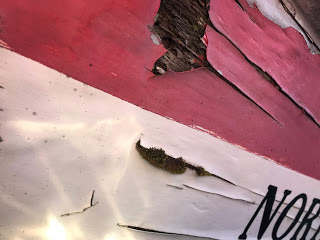 And of course, every dory geek in the area had to come by for the event. The contagion has spread! 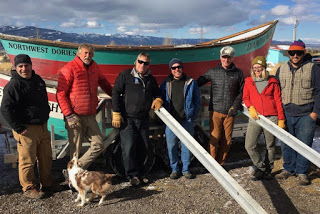 And off we go. 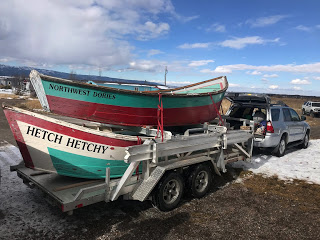 We stopped and visited with Matt Hyde in Idaho Falls, third generation builder of Hyde Drift Boats. They are doing some pretty interesting stuff with design–aluminum and fiberglass. No wood. Matt was not the least interested in our relics. Then on to Blackfoot for the highlight of any trip: the Idaho Potato Museum. 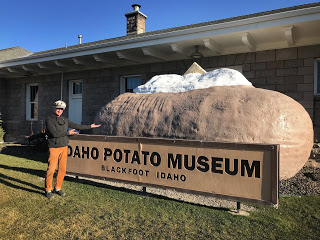 I really think she kinda likes me. 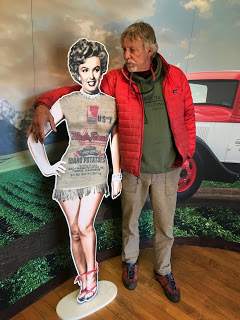 We spent the night in Salt Lake with boatman Moqui, who had worked the Idaho rivers with these boats. He had some pretty good tales, including when Tom Rambo knocked the stern off the Diamond Head in Elkhorn Rapid. An old rancher gal name Frances gave him part of her sewing table for repair wood.
The next day we went back to Moab and spent the afternoon with my old 1970s boss Ken Sleight. It had been way way WAY too long since we’d caught up with each other. What a treat. 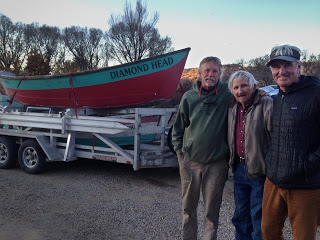 One more sunset in the distant red rocks. 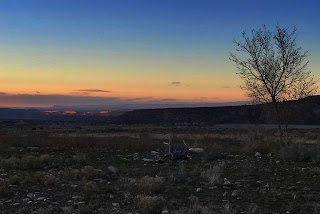 At Andy’s place the next morning Tim Cooper chuckles at our optimism. 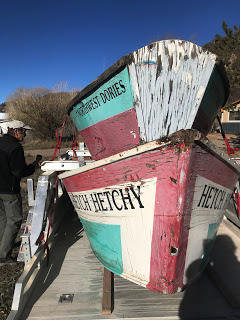 Coop shared a photo of the rebuild he did on his Briggs boat Celilo Falls a few years back. He arranged all the wood he took out next to the rebuilt boat. Yeah, so we might be heading down that road as well. We shall see… 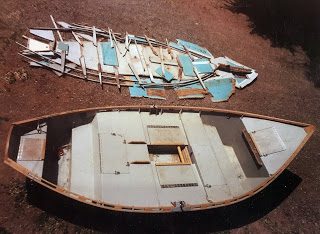 I reckon I pulled nearly that much wood out of the Betty Boop a few years back. (See blog posts throughout September-December 2011.) 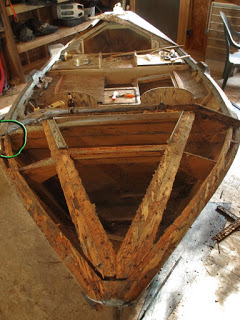 The Diamond Head stayed with Andy and the Hetch Hetchy came home with me. She is on her way upstairs until I can get a few other projects out of the way. But hey, the bottom looks pretty good… 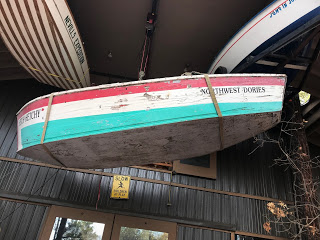