Anyhow, we just did a 12-day dory trip down what was once the Grand River from Loma, Colorado to Lake Powell. This links together four different trips that are rarely run all at once: Horsethief and Ruby Canyons, Westwater Canyon, the Moab daily stretch, and Cataract Canyon on the main Colorado–not to mention a few orphan stretches like Cisco to Dewey Bridge and Moab to Potash. We did this once back in 1997, and I’ve not heard of anyone doing it since. And I really don’t know why. It’s pretty awesome.

Andy Hutchinson coordinated it with Colorado River and Trail Expeditions (CRATE) and Adventure Bound, as no one outfitter seems to have all the requisite permits. Andy, Kate Thompson, RJ Johnson, Curtis Patillo and myself rowed dories, and CRATE and AB supplied a revolving assortment of excellent raft guides to carry much of what we could not. We had several sub-groups of boating friends from rivers past, who all melded quickly into one exceptionally fun group.

For the first day or two we got to wave to the freight trains and moon Amtrak. Lots of scenic wanders and wacky critters. 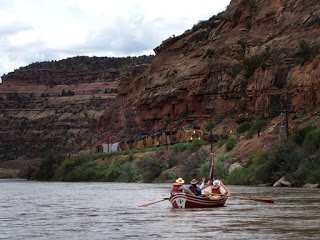 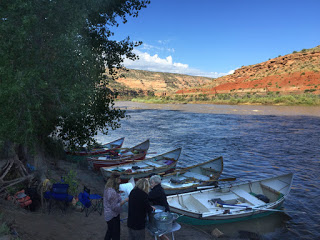 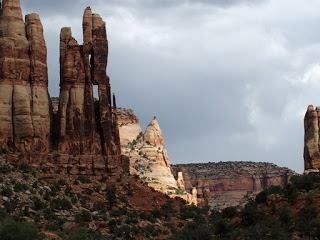 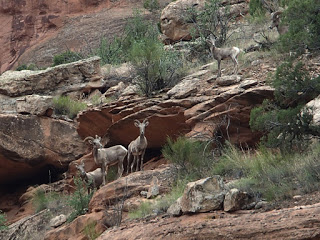 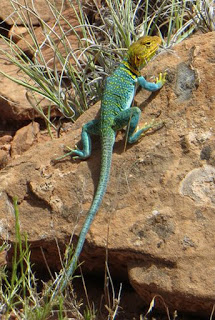 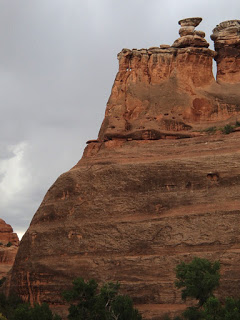 On the second day the Dalai Lama, my mom, myself, our lovely raft guide Shawna, and my friend Leah, who made my new cape, all shared a birthday. 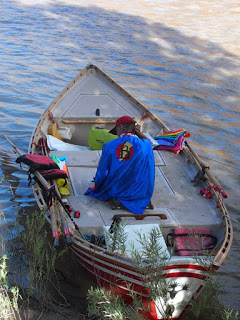 Only Shawna (in the green tutu) and I (leading the conga line with a boom box in a bucket) were there to celebrate our special day, however. I am now eligible for a Golden Age Pass to the National Parks, and Social Security. Time does fly. 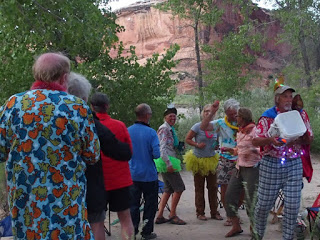 The next day was Ringo Starr’s 75th birthday and he asked everyone in the world to, at noon their time, flash peace signs and say, “Peace and love.” We complied while checking in at the Westwater ranger station. 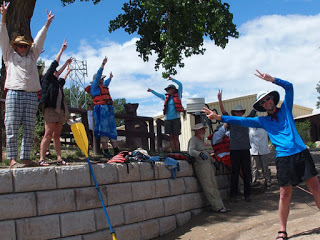 Westwater at 10,000cfs was fast and furious but we did pretty good. The magnetic wall got one dory but only a surface wound. Here we are whooping it up in Skull Rapid eddy. 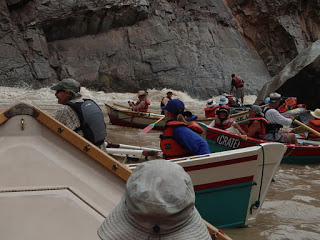 We got some pretty wild weather and a couple spectacular mosquito storms. 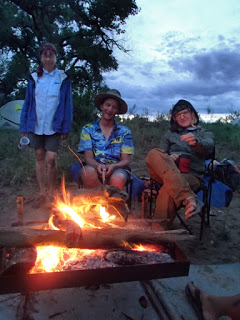 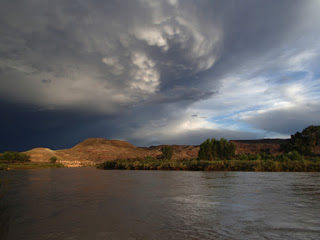 Fisher Towers and the La Sal Mountains sure make for a nice backdrop. 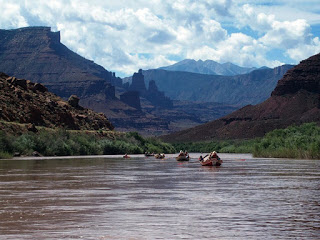 Tres amigos: RJ, Andy, and I relaxing–but only for a moment. Much hard work to do. Gotta go get another round of beers. 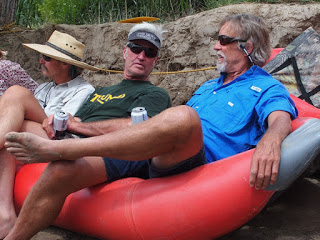 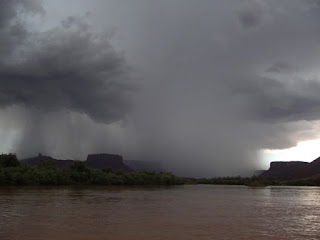 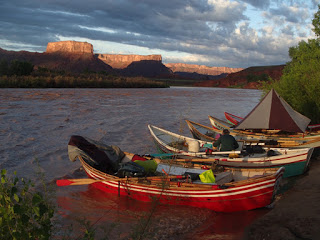 We tied the dories up and threw on RJ’s and my 6hp kickers for the long, flat stretch between Big Bend and the Loop. Party barges for a couple days. 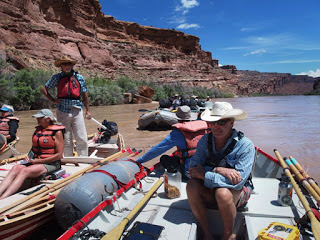 One night we were getting desperate for a camp as the shores were thickly overgrown and screaming with bloodthirsty mosquitoes. We finally spotted a a pair of wee sandbars just far enough offshore to frustrate the skeeters. North and South Salvation Island, we called them. Lovely view too. 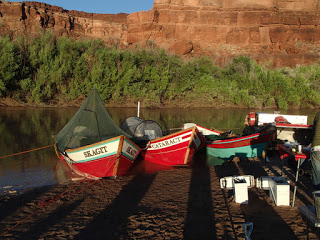 Hello from long ago. 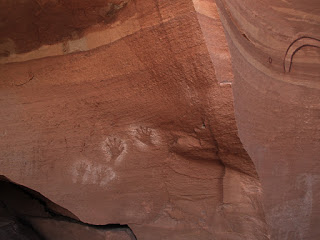 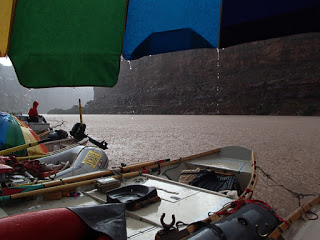 And on into Cataract Canyon, where we laid over for a death march up to the Doll’s House. Look: four original Briggs boats (1/9th of the 36 that were ever made), all sporting the classic three Litton/Reilly colors. Love that look. 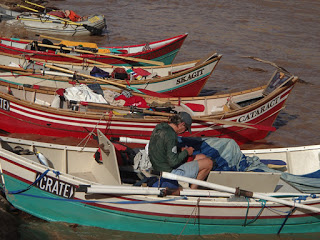 RJ decided he could give just as good a geology talk laying down with a cocktail. Better, actually. 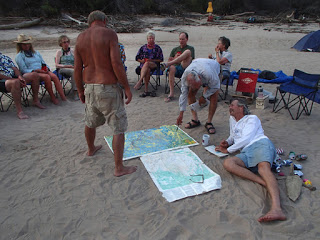 Brian and Nikola Megaw, out patrons for last fall’s dory build in New Zealand, came over for this trip to see how we do it. What fun. 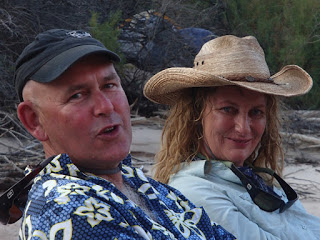 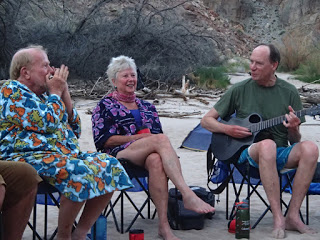 Andy, Kate, and RJ scouting the Big Drops. The Drops looked pretty scary at first, but the more we looked, the more the line became evident. “Every rapid speaks plainly,” Buzz Holmstrom once wrote. “It remands respect… some places it says go here safely if you do it just this way.” 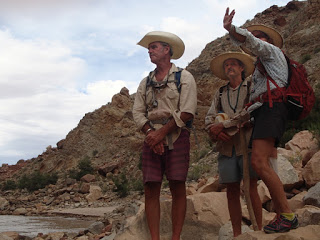 Woo hoo! It worked! Thanks, Walker, for the great shots. (And thanks Lauren and others for some of the other photos.) 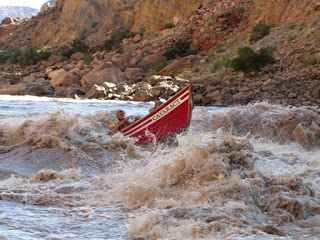 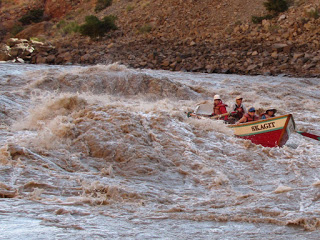 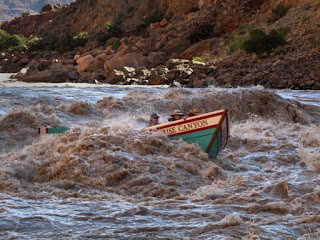 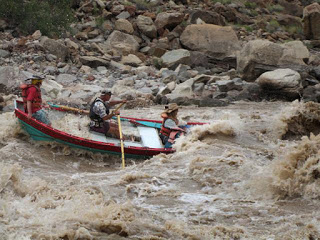 Despite great trepidation about the mud cliffs at the takeout at North Wash, it went smoothly and quickly. Plenty of time to get back to Green River, clean up the trip, and get down to Ray’s for one last ceremonial burger. Here’s the place next door–not open this century, but that’s where I met Amil Quayle back in ’78. Most of downtown Green River looks like this. 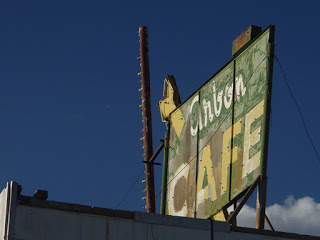 I hate to say it but most of you folks missed a really world-class trip. Tune in this winter and we’ll let you know about the next cockamamie dory adventure we cook up.