I’ve been on a tear for the last few years about oars for aging boatmen’s shoulders, elbows, wrists, tendons and muscles–mine in particular. The last few published treatises on oarmarking, written nearly a half century ago, already bemoaned the fact that decent oars were no longer being made, and it has only gotten worse. Way less dynamic flex, way more needless weight outside the oarlocks. The result is an oar that sends shockwaves through your entire frame rather than absorbing the impact of waves, and far more weight (called “P-weight”) that you have to lift from the water with each stroke, resulting in tendonitis and associated other grievances. Bludgeons. When we were young we were tough enough not to care. But now–I care. And, still rowing five to ten Grand Canyon trips a year, I hurt.

Even the synthetic oars, which are light and flex well, are not dynamic enough to function quite right. Too much flex inboard of the oarlock where you need stiffness, and not quite enough flex way out toward the blade. The perfect flex, thus far, can only be created with perfectly tapered wood.

When I went to work for AzRA ten years ago, rowing rafts in Grand Canyon, I was allowed to grab oars from the garbage pile. Amazingly I found four very ugly but straight 11′ oars. I took them home and power-planed off several pounds of wood from the outboard ends and approximated the nice flex of the Smokers I had long used on dories. More recently I decided that 11′ was just too much oar for an old guy. Some of our guides were using ten-foot oars happily, so I cut mine to 10-1/2′, dropped my oarlocks an inch, and bingo, my shoulders quit hurting as much. This past season I loaned these Frankenstein oars to a couple friends and they waxed rapturously. I think I am heading somewhere with what I need oar-wise. And what more and more of my aging boatman friends are coming to need.

When I went to WoodenBoat School in June, I learned how to make devine oars from scratch, and I made a pair from nice, light, strong spruce. 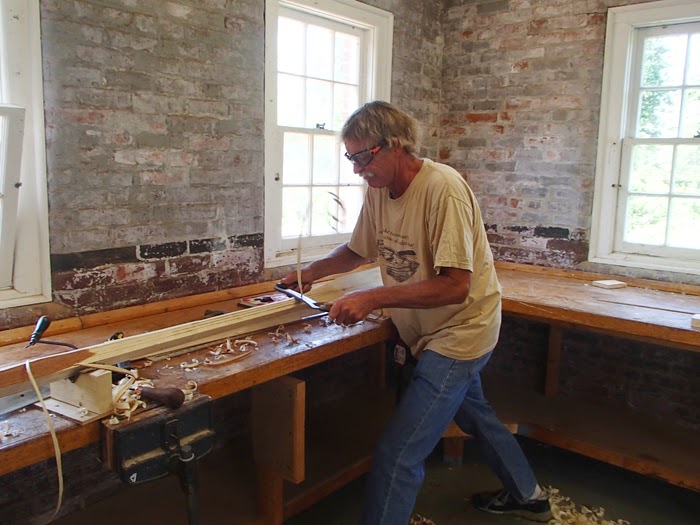 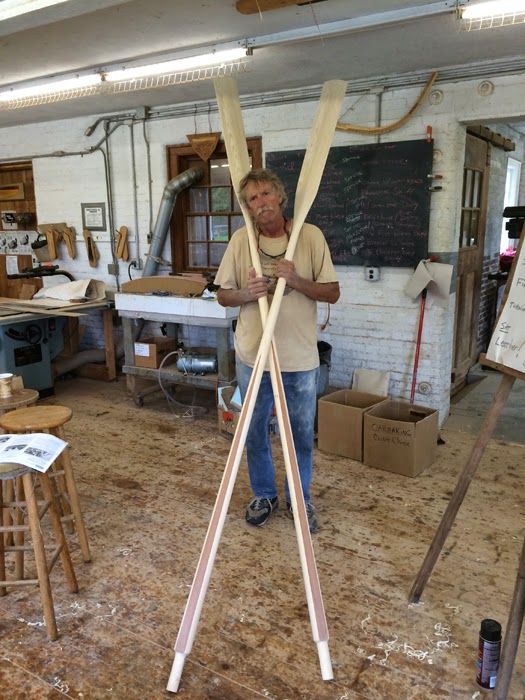 >By inference, I learned how to make bad oars better. I learned what wood you can and should remove, what wood must remain for strength. One of the big tricks is keeping them perfectly centered and straight–assuming they were straight in the first place.

The lovely set of spruce oars I made in school worked magnificently in Grand Canyon last September, but, being afraid spruce was not quite strong enough, I had left a bit of beef on the blades. Turns out they are heap plenty strong and a bit too stiff in the blade department. I like a springy flex. It makes my wrists and arms and elbows and shoulders all much happier.

So with a bit of trepidation I pulled them out a few days ago and re-marked all the center lines and began symmetrically removing blade. Not a lot–but I think it may be enough to make me happy. And of course, every ounce you remove from the blade not only adds flex and spring, but lightens the P-weight of the oar in your hand. 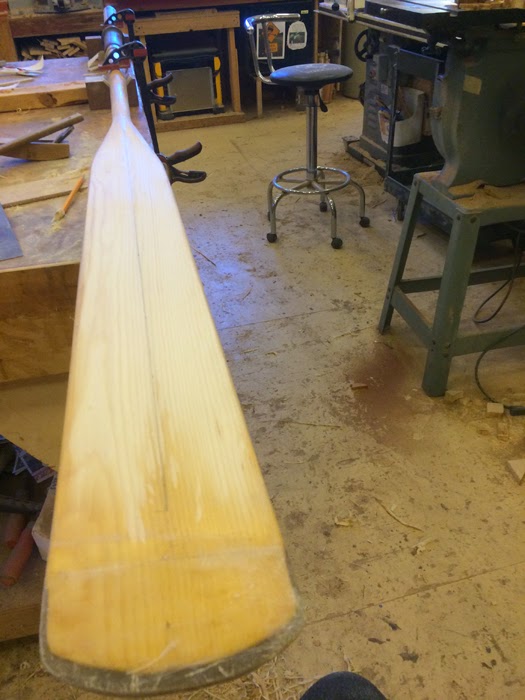 So then I pulled out a clunky Smoker oar I had–made for modern hacker oarsmen, they now carry far more weight outboard of the oarlock than they need to. And they are among the nicer modern oars you can buy. I started in by drawing all the centerlines, and establishing goals to thin to. 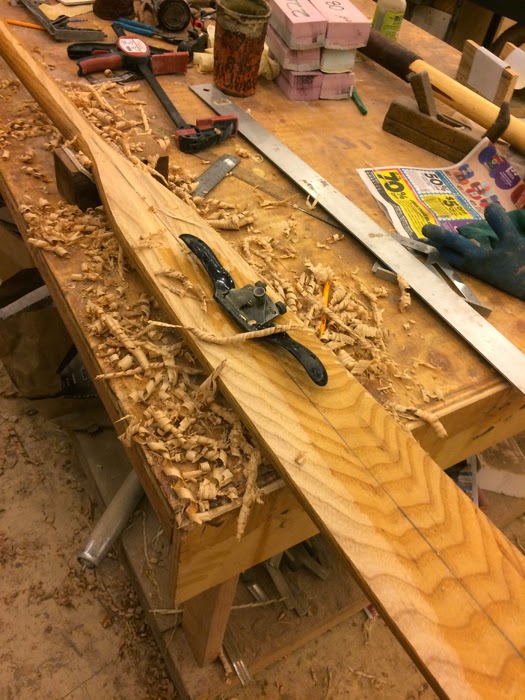 I got my rough cut done last night with plane and spokeshave. I was about to start in again this afternoon when Greg Loehr walked in. Greg, the epoxy guru, Greg the surfboard shaper. Away went the spokeshave, out came the big goddam board grinder with a 24-grit disk. Yikes. The thing simply vaporizes wood. But Greg has a light touch after decades of grinding styrofoam boards.

In a matter of minutes we felt our way into creating sweet, concave tapers on the blades, climbing to a raised spine in the oar’s center.  Leaving that spine saves most of the blade’s strength. Removing everything else saves your arms.  We tapered the blades to about 3/16″ around the edges. We ended up with an oar about a pound and a half lighter than its siblings, with a balance point 2-3″ closer to the oarlock. This is very good.

We also reduced the size of the shaft between the oarlock and neck of the oar–more flex, less weight. 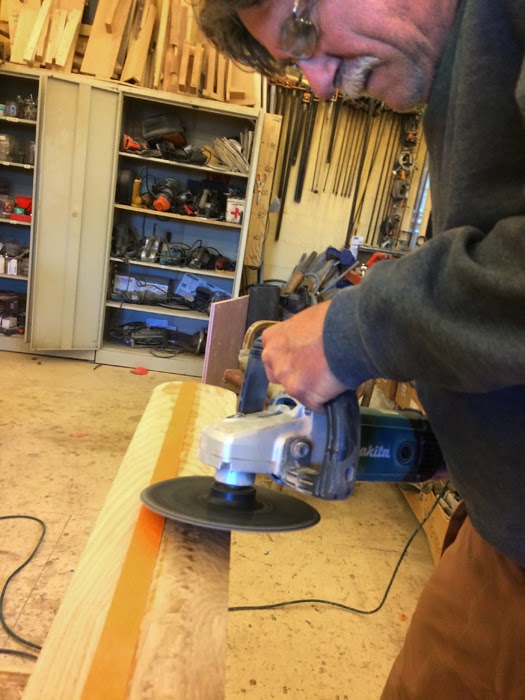 I finished up with my foam sanding blocks and oiled it up this evening. Wow. I think we are onto something. 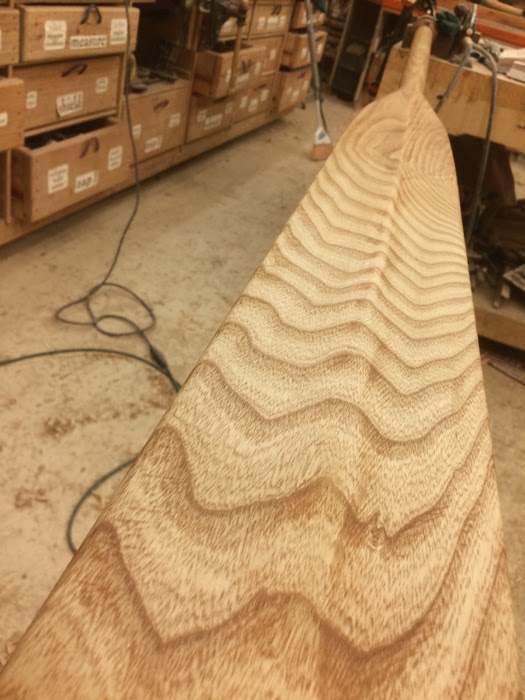