brdfrd2020-11-27T17:21:57+00:00December 9th, 2014|News|
Well, I’ve been back from New Zealand long enough to catch my breath, so it’s back to the shop. First up was my dory Cataract, who had taken a couple hits in Bedrock Rapid on my last trip when I got tangled up in a couple spinning rafts and slammed into the lower right wall. Ow. Pilot error on my part. Although the wood was a bit shattered at the impact points it was not bad enough I felt it needed full replacement. So I went with the trusty old spooge-patch–inject resin into all the fragments and compress it back into shape. In essence you end up with an area that is still made of wood and glue, but is a bit closer to particle board than plywood. 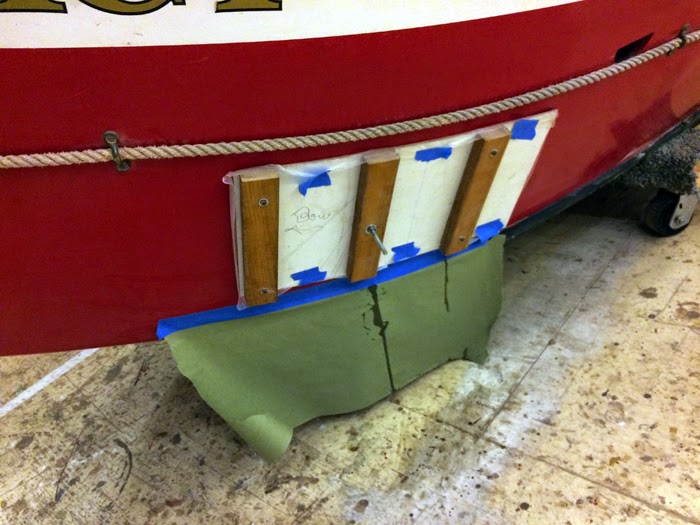 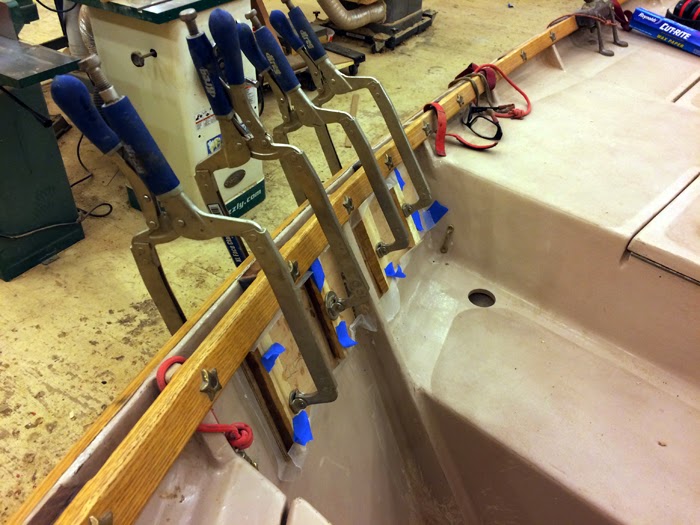 But it works just fine. 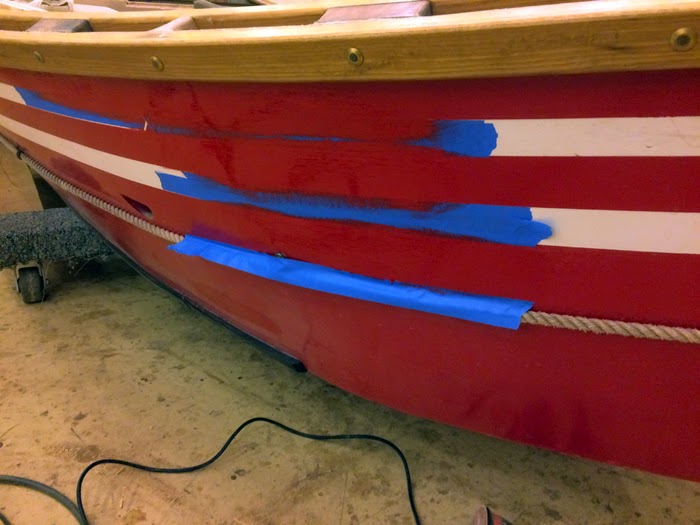 Then Greg Reiff showed up with Sandra, his 1940s original Nevills Cataract boat. (Nevills was Greg’s grandad.) Andy Hutchinson restored her from a desperate state back in 2000, and she’s had many a Grand Canyon run since. But something was amiss and she had a bad case of creeping rot. My diagnosis was that it was stemming from the four sealed floatation chambers–an artifact from the old days when the fear of actually sinking was a bit more prevalent. These four triangular chambers were full of spray-foam and plastic jugs. The foam was allegedly closed cell, and the chambers were allegedly airtight. What could possibly go wrong? Well, the same thing that always goes wrong. Curious water molecules find their way in and can’t find their way out. So they set up a rot farm. I proposed opening the four compartments to the hatch spaces and removing the foam so they could dry out on a regular basis. More storage room, less rot-farming. And in we went.

It took a splitting maul to bust out the seat hatch, which was aggressively filleted in with epoxy. Kinda fun in a sick sort of way. 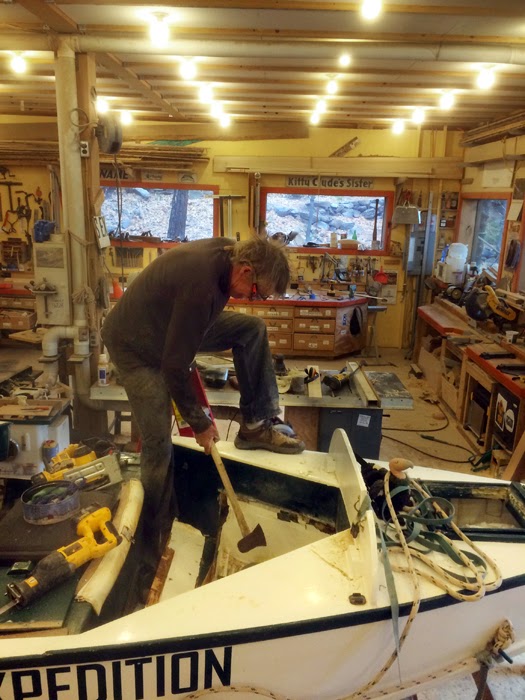 We broke out another non-traditional boat tool–a shovel to start hacking into the soaking wet foam. 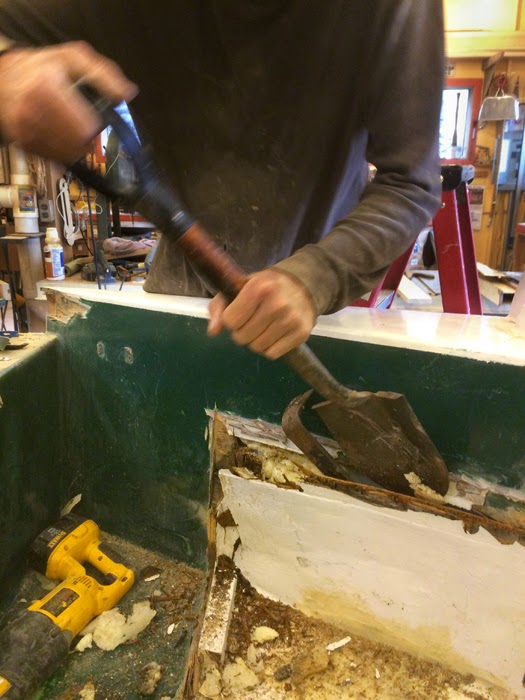 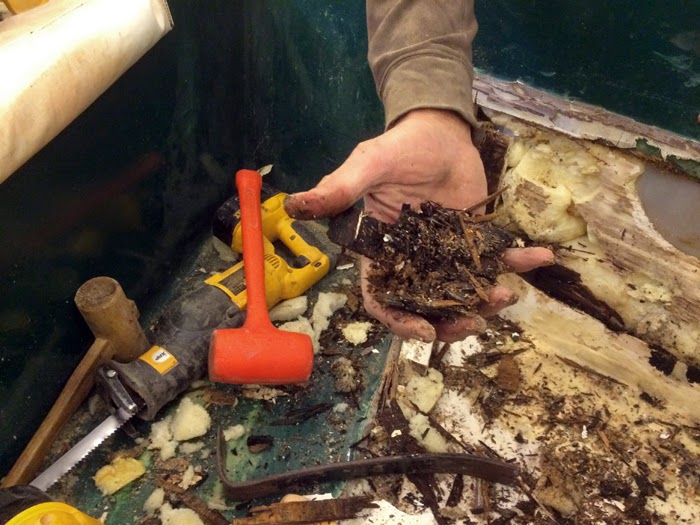 Greg spent the better part of two days clawing away at the foam, which proved to be surprisingly fond of being inside of the awesomely awkward compartments. 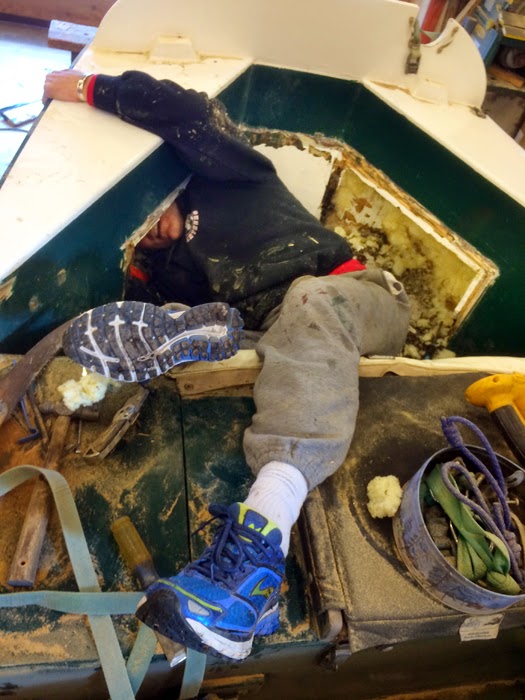 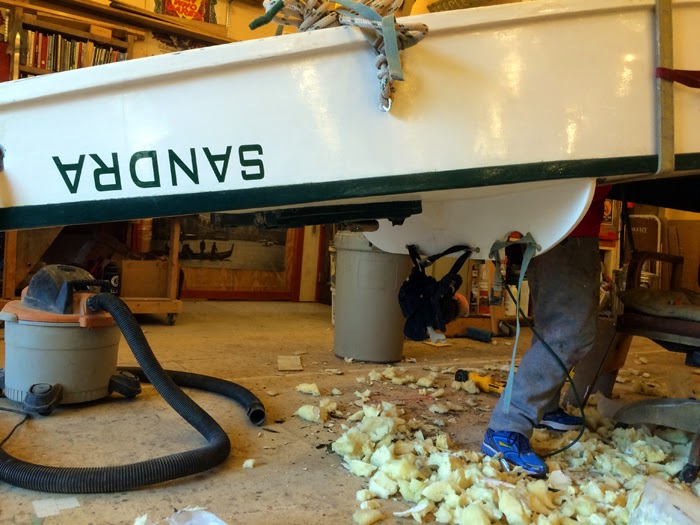 One major piece of the side and two of the bulkheads also had to be removed due to rot. 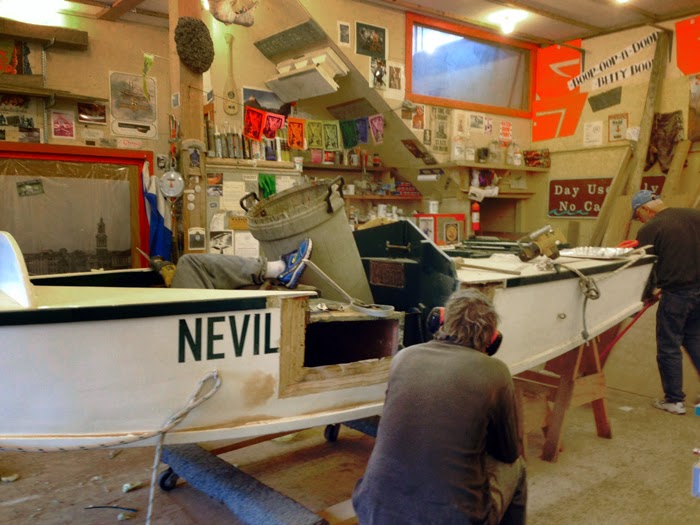 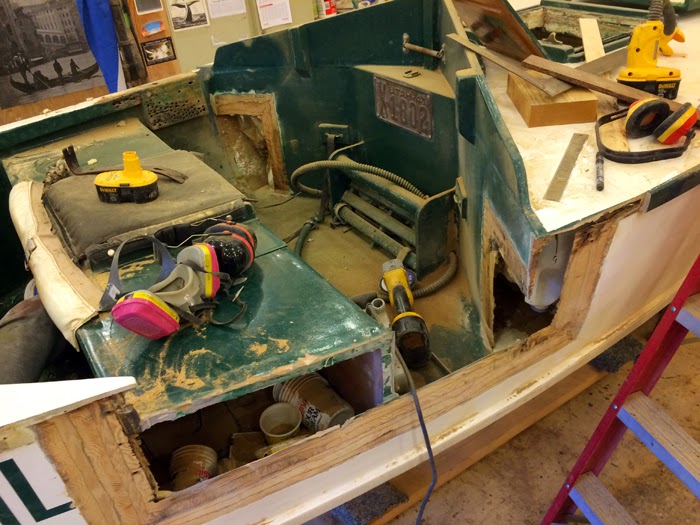 But at the end of two days we had her ready for rebuild. We figure a month or two of drying out is in order before we start the reconstruction. So up she goes into the loft, passing her sister/mother/granddaughter boat Moe on the way. 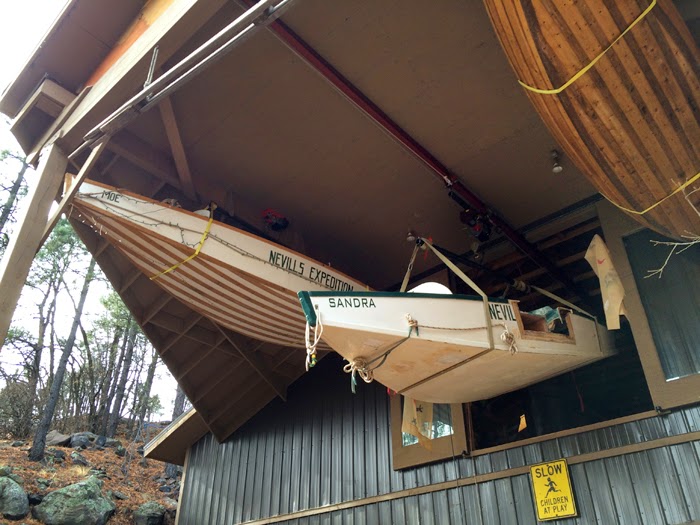 Meanwhile my buddy BJ has been building all the ribs for another classic Briggs-style dory for Grand Canyon. I was so happy with the scarfing jig I made in New Zealand that I made another just like it. Screw a circular saw to a 2×4 and plywood box, set the angle-cut, and have at it. 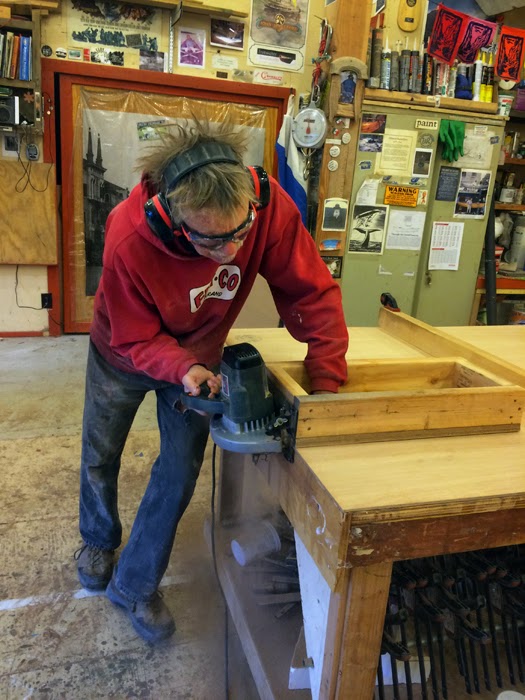 And the wedge-clamp glue-up system is my new favorite as well. 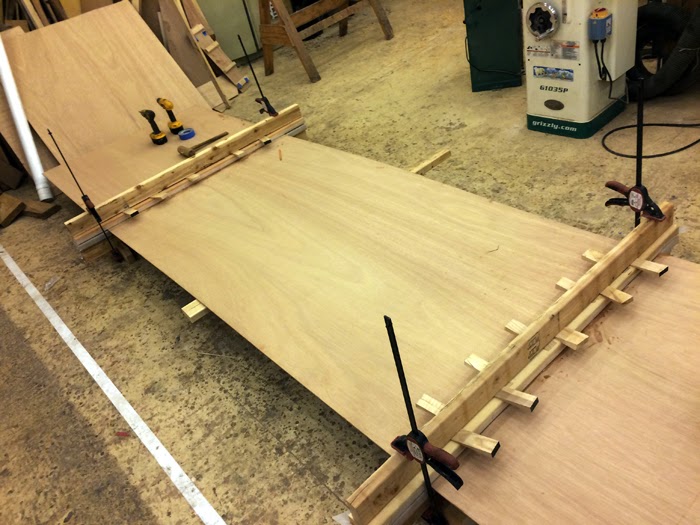 BJ ground off the scarf joints yesterday and last night we cut out the side panels. Today was build day.

Another thing we figured out in New Zealand is that the normal system of starting at the bowpost and installing rib-by-rib to the other end is not necessarily the best way to go. The first three ribs, especially in a Briggs, put up a hell of a fight. Things explode; tears are shed. So when we built Eva, we started normally by fastening both sides to the bowpost. Then went all the way to the middle of the boat and put in the middle rib. Then we worked backward, rib by rib, to the front of the boat. This allowed the side panels to come to grips with the crazy twist in a far gentler and more agreeable manner. Once the bow was done, the stern came together very willingly.
We went with the new system again today and I am sold on it. Bowpost first, then ribs 5, 6, 7, 8, 9, and 10. Deanna and the ghost of Martin Litton are admiring the build. 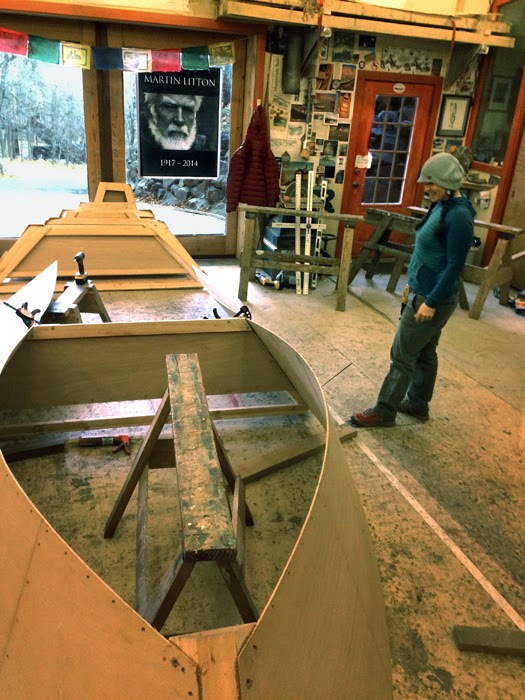 Here are BJ and Roy working back toward the bow post with no exploded ribs and no crying. 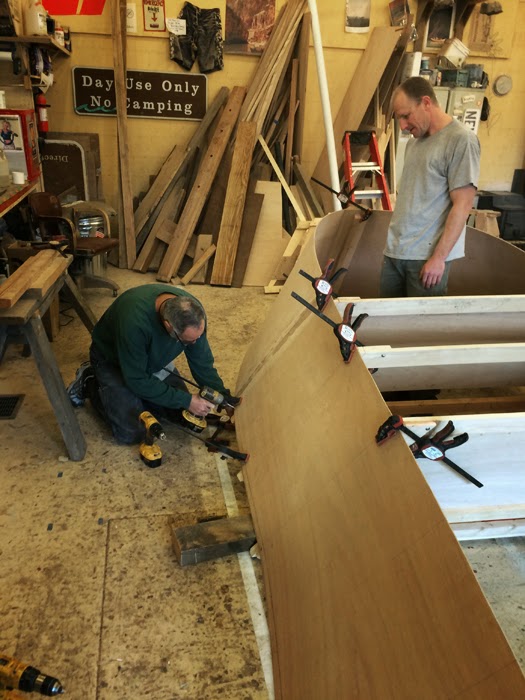 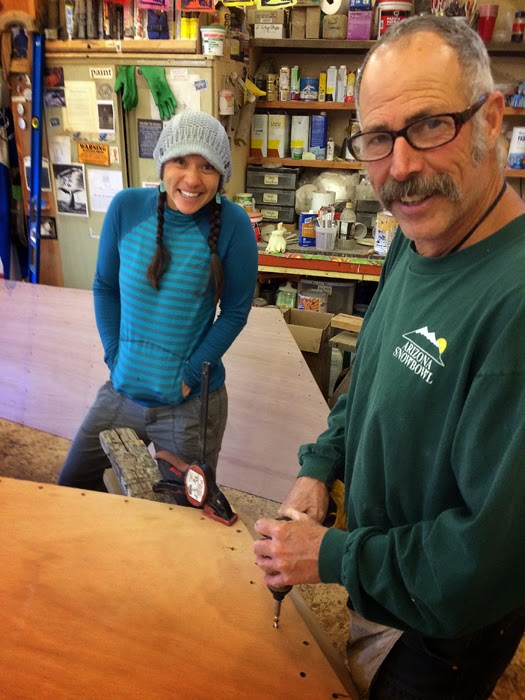 All smiles at the end of the day. The Thunder River (or Thunder Liver) (or Thunda Liva) is born. Our first boat ride: 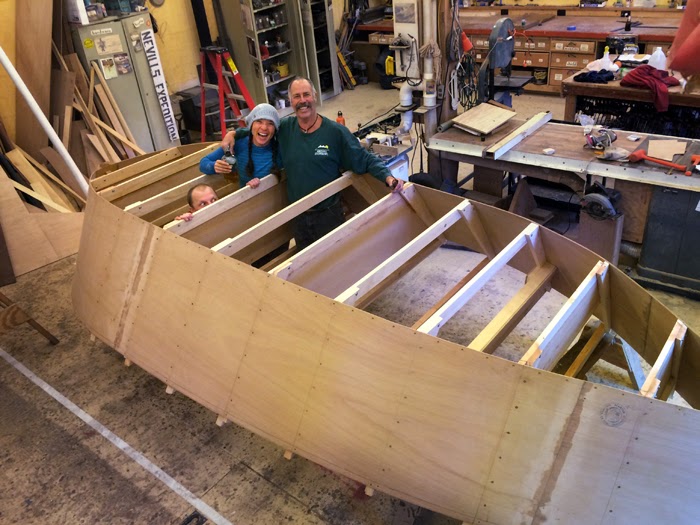