brdfrd2020-11-26T17:35:58+00:00July 16th, 2014|News|
I headed north from school on a Saturday, and as per my normal style, drove through the entire heart of Hurricane Arthur on my way to Nova Scotia. Canadian Customs pretty much ransacked me, certain that I was up to no good, but eventually let me proceed. There were gale force winds and torrential rains all through New Brunswick, tapering off to just gales by early evening when I entered Nova Scotia. 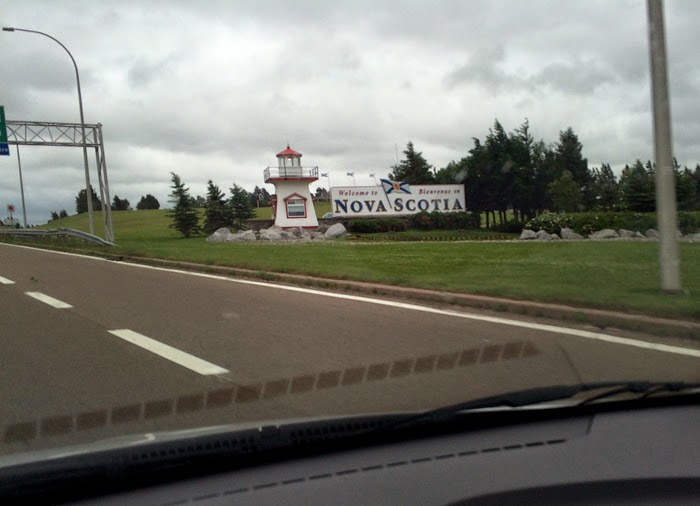 My high school buddy Steve and I drove to Nova Scotia back in 1972 to see the total eclipse of the sun–the one Carly Simon sang about in that song she wrote about me–“You’re so vain…” But back then I didn’t know I was doomed to a dory obsession. Too bad, as there were a lot more of them back then. Neither did I know then the this is heartland of my patrilineal lineage. Shubael Dimock and his son Daniel, fleeing religious persecution down in the Colonies, had fled up here back in 1757. Maybe they were persecuted or maybe they were just really annoying über-baptists. Anyhow, several generations later my grandfather finally wandered back to the states. I guess the rest of the Dimocks did too, as there aren’t more than a handful left. Maybe we got chased on north to Labrador.

About nine o’clock that night I hit my destination–a funky little campground and nature park with a small restaurant run by Harry Chapin’s brother Steve. Ovens Natural Park, it’s called, a few minutes out of Lunenburg on the coast. Steve was playing wicked piano and singing with an incredible redheaded vocalist named Jennah. I ordered clams and fries and a Stormy Night, calmed the hell down, and enjoyed the show. 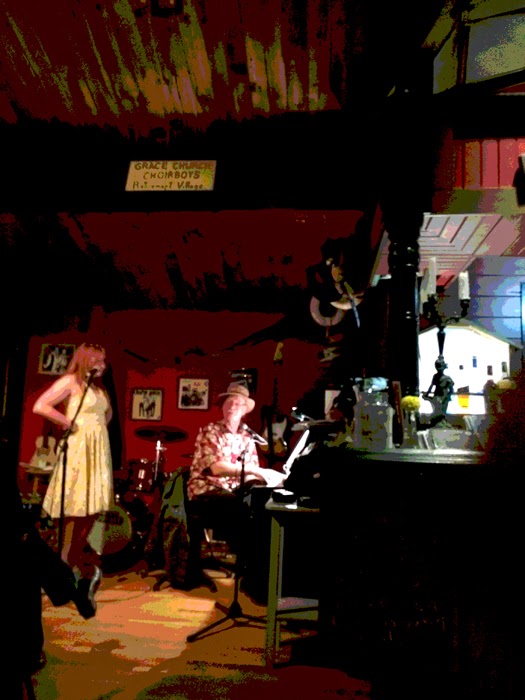 Late that night in the howling wind I set up camp in a sweet, secluded spot on the shore and settled in for the next several days. 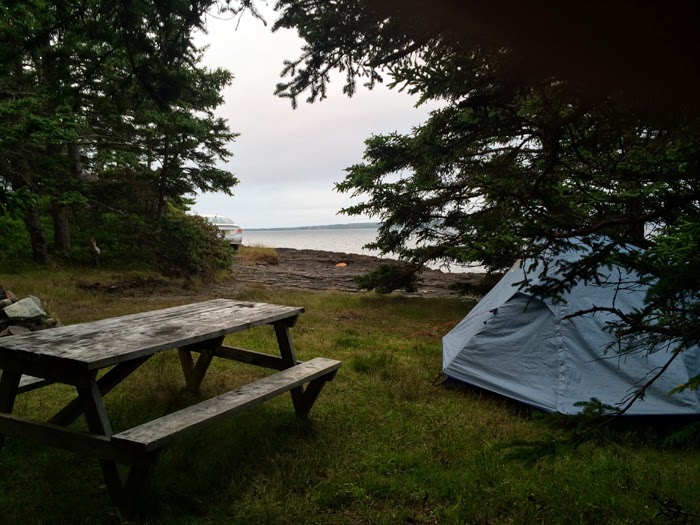 Their nature trail is kind of fun, running along the sea cliff and down into several thundering sea caves–the “ovens.” 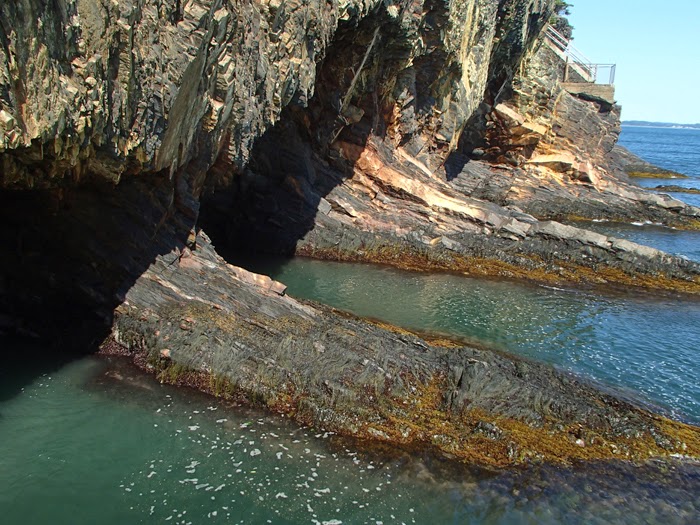 I couldn’t help but head into Lunenburg my first afternoon. It’s one of the last ports that ever ran dories on the Grand Banks, it sports one of the last working dory shops, and it’s been a place I’ve long wanted to visit. There are a lot of dories around there. 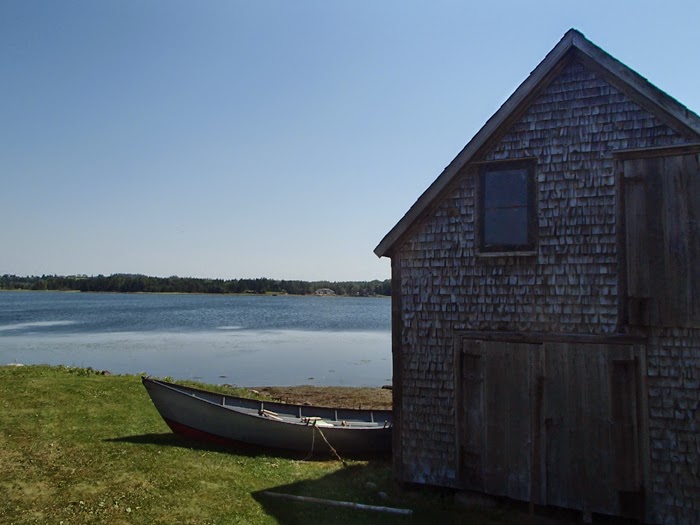 Unfortunately, if I’d really wanted to see Lunenburg as a fishing town, I was about two or three decades late. As the fisheries were fished out by the seiners, and the ocean floor destroyed by the draggers, the industry completely collapsed. As Lunenburg began to falter, it grasped for another livelihood–tourism. They cleaned the place up, gentrified the downtown, painted everything bright colors, became a world heritage landmark, and, as far as I can tell, are actually doing quite well. Charming, expensive, but definitely no longer an antiquated fishing village. Ah well. 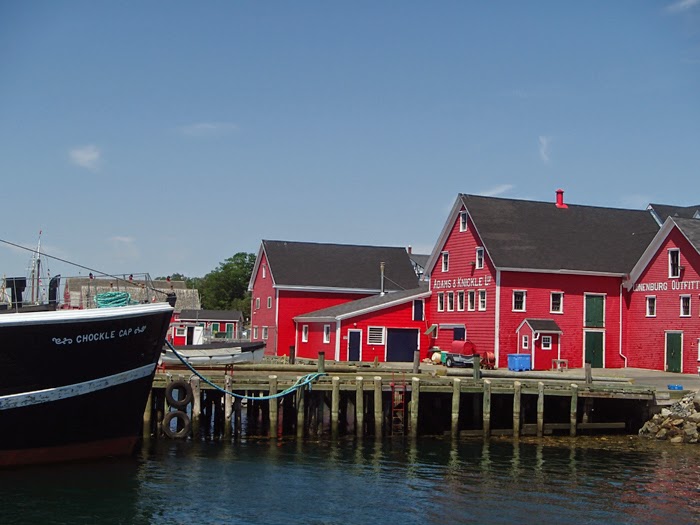 Languishing on a wharf in the middle of town is a fleet of dories used for the annual races against Lunenburg’s arch rival, Gloucester, Massachusetts. Canada kicked butt this year. 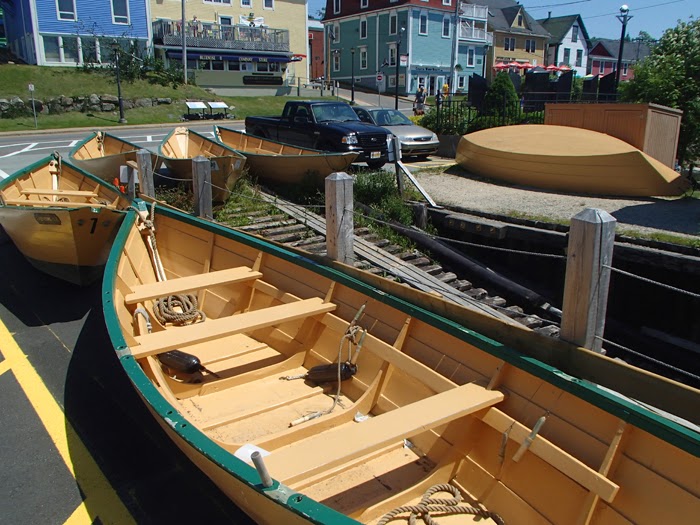 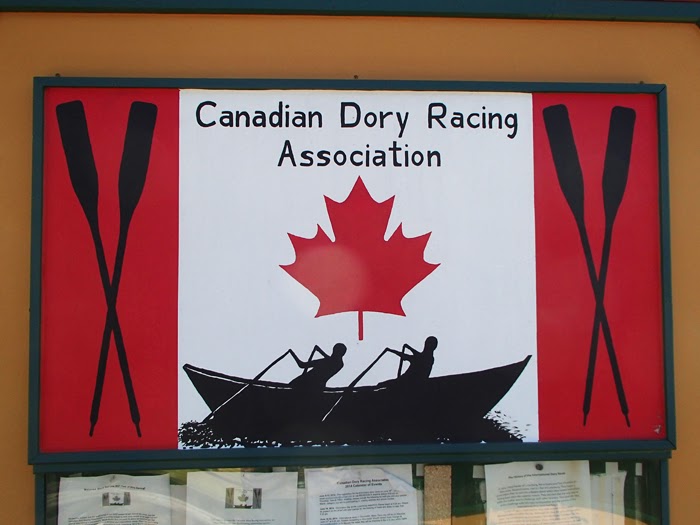 Lunch was pretty much okay–a scallop po’ boy, halibut chowder, and an espresso frappe. I’m sure this must be what the old fishermen ate. 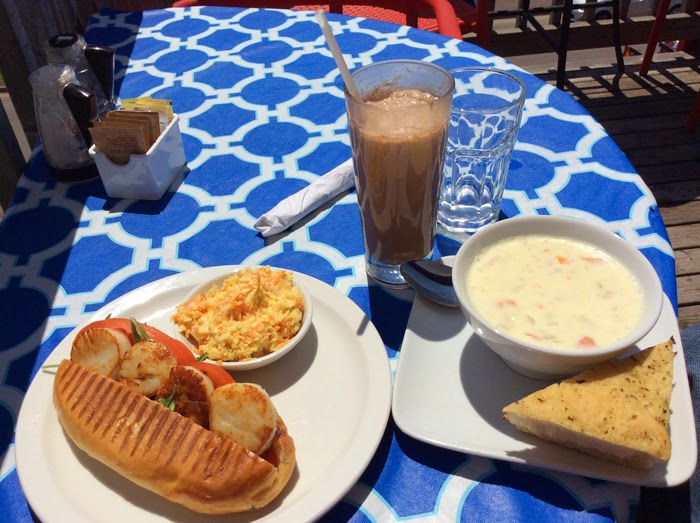 Fortunately there’s a hold-out at the end of the street–The Dory Shop. A chaotic little unpainted place still cranking out old wood boats in pretty much the old way. But with a few power tools. 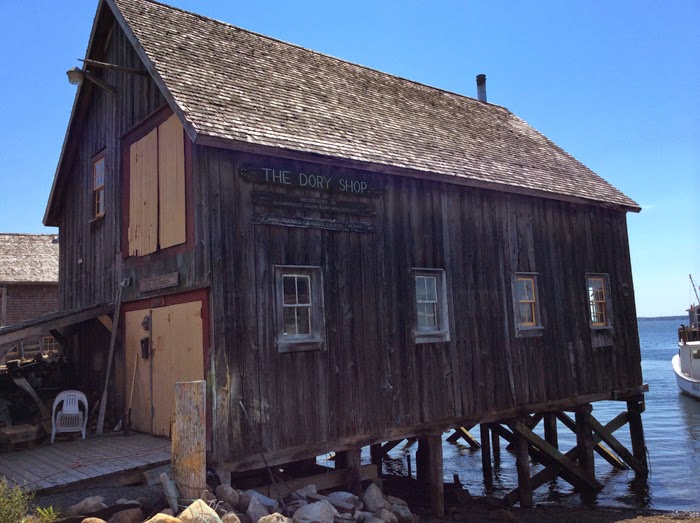 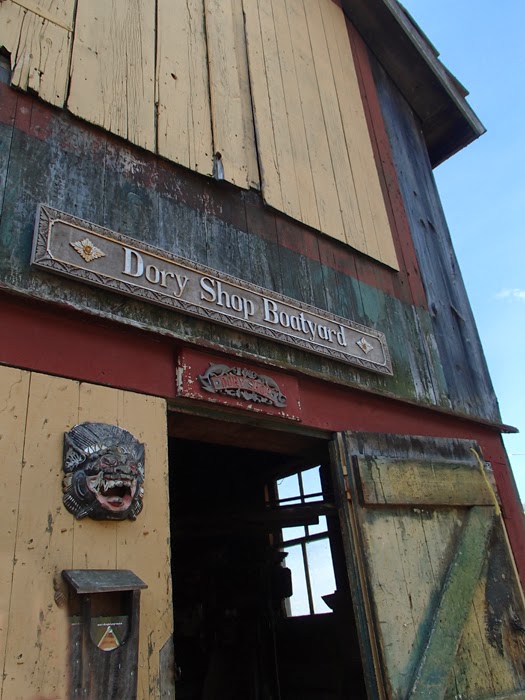 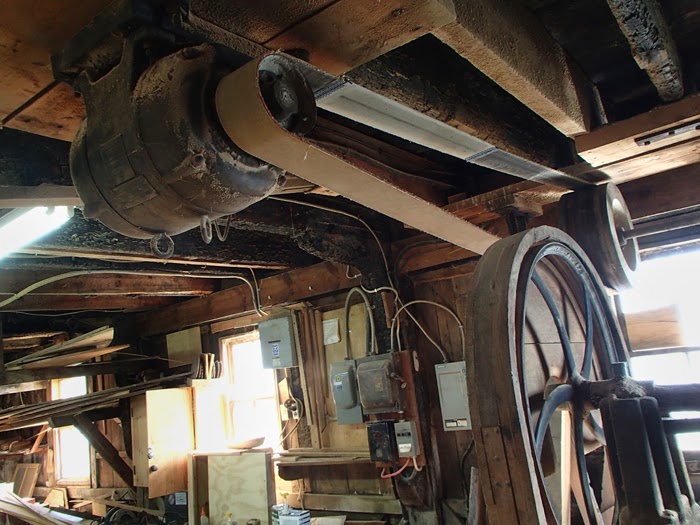 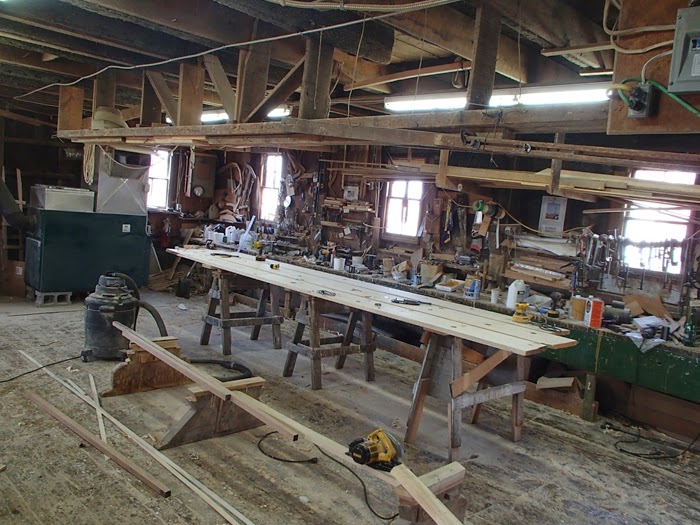 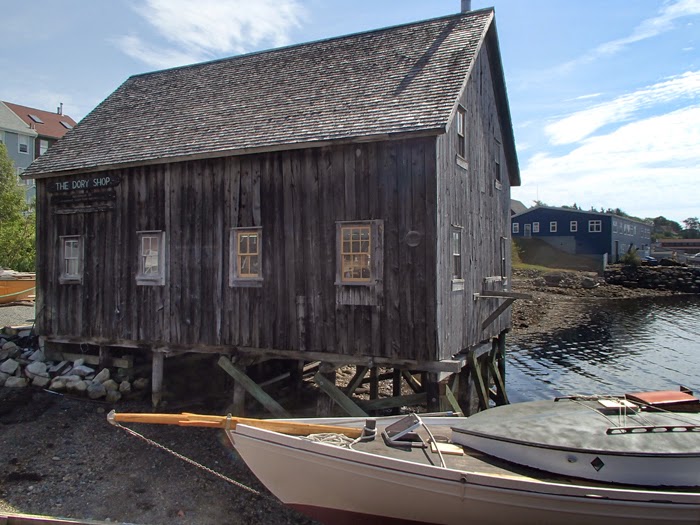 The building is one of the last remaining old fish sheds where generations of fishermen dried their codfish. Looks like it’s been on fire now and then. 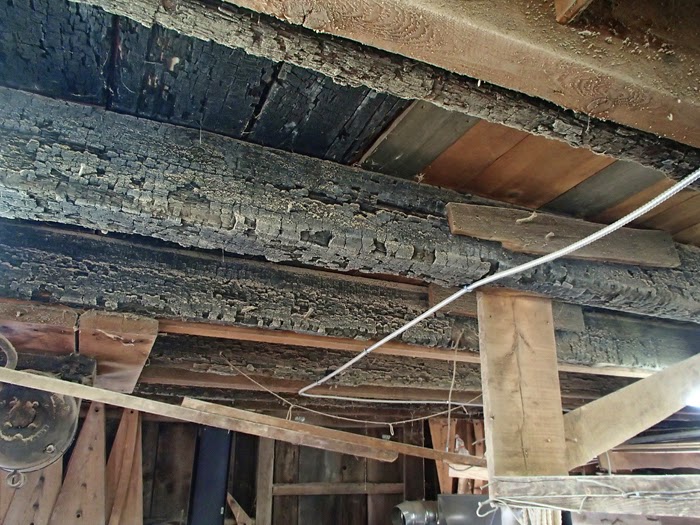 In the yard are a mess of old boats and a fleet of brand new dories just finished for the Racing Committee to replace the old ones downtown. 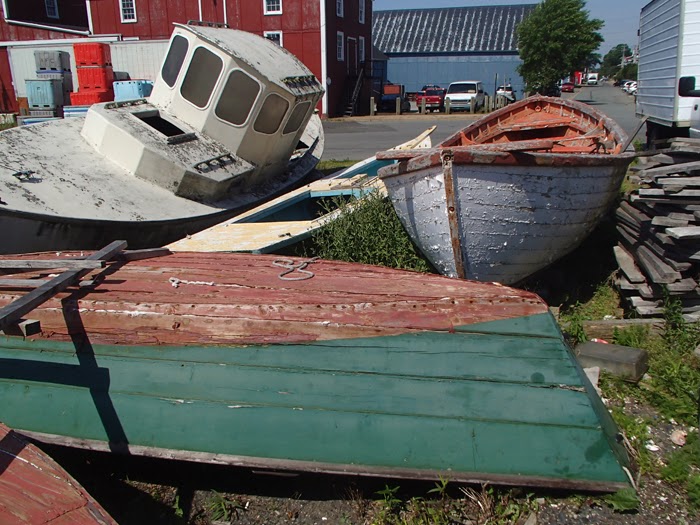 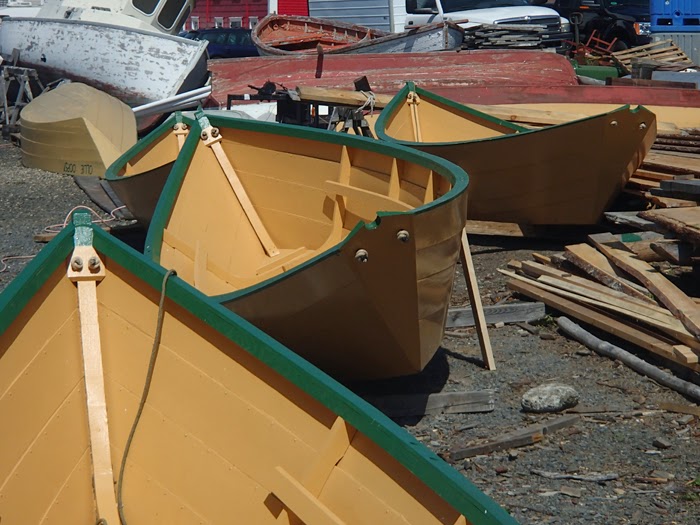 Jay Langford, who has been running for the shop for the last twenty years or so, was in the yard muttering about the dories which the Race Committee had failed to take home and house. So there they sat, blowing about in the hurricane and beating themselves up. Jay was doing a bit of cosmetic work on them when I wandered up.

When I came back later he was working on the floor for the next dory. We talked a bit about boats and designs. The Lunenburg boats, it turns out have quite a bit more rocker than those made down the coast in Shelburne–5-1/2″ of rake as opposed to 3-1/2. And the ones down in the States have even less. 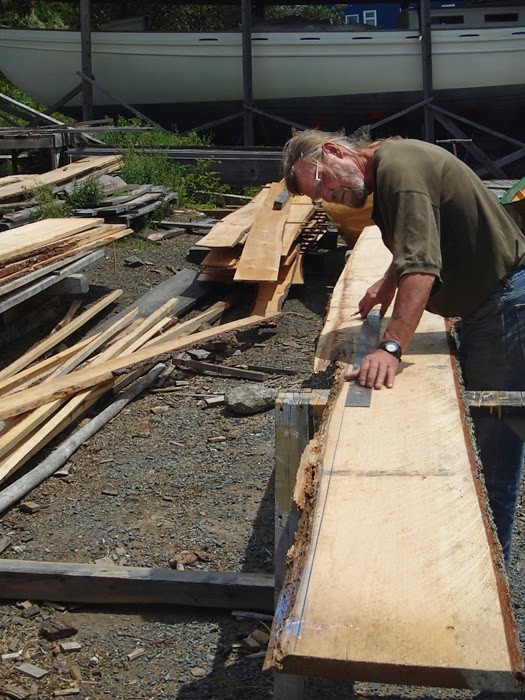 I mentioned I had long wanted to take one of their dory building courses but so far I’d not been able to fit in into my schedule. Jay allowed as how it was a pretty fun course and I really ought to do it. I replied that I will, someday.