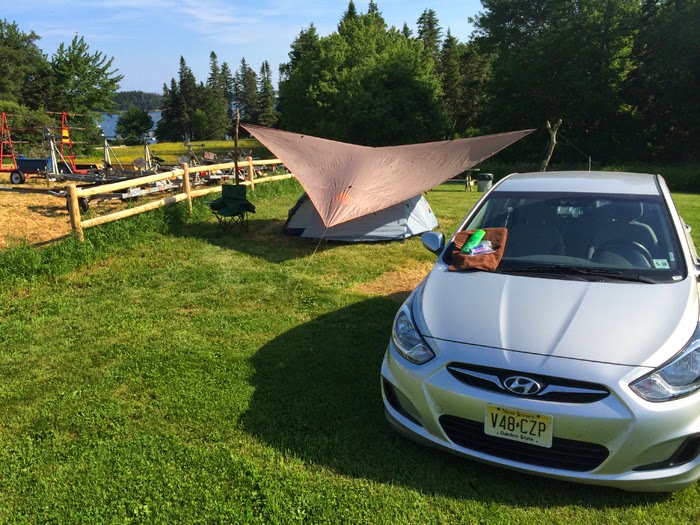 This year I elected to take an oar making course from Clint Chase. It seems I can no longer get the oars I want, and have to do quite a bit of work on any new oar I do get in order to make it into what I want. So why not start from scratch? On day one we started tracing our patterns onto rough cut spruce. 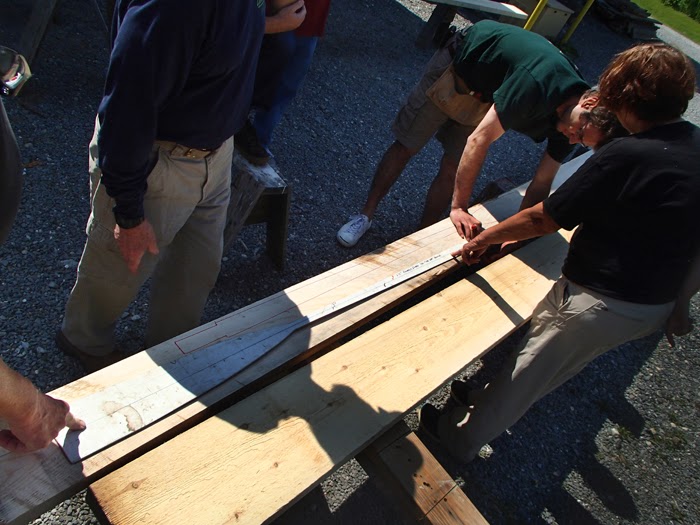 The school, not surprisingly, did not have patterns for the giant ten-footers I wanted for Grand Canyon, so I had to make a pattern right off the bat. Then I got lucky and found a plank long and clear enough that, by overlapping my my oar shafts (or “looms” as they are called) I could cut two oar blanks out of it. 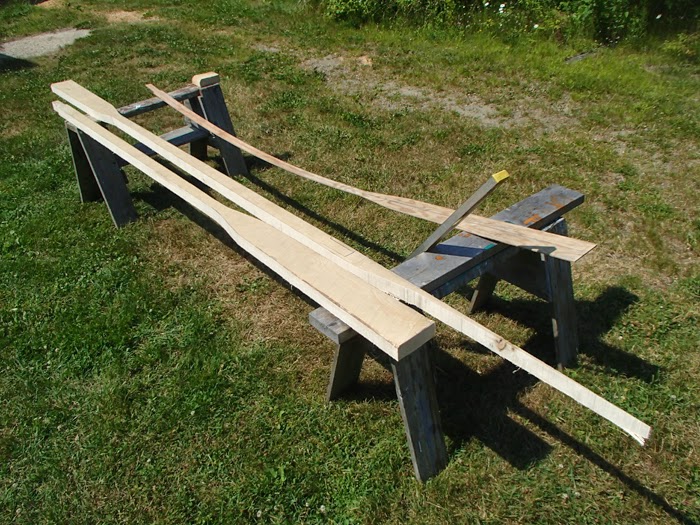 In order to make the inner loom thicker we planed the oar blanks smooth and glued on strips of another harder, heavier wood. I used mahogany. 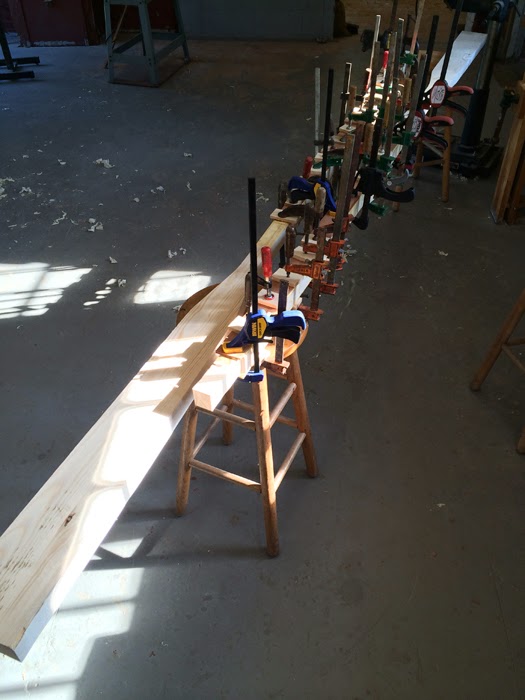 From here on in it’s a matter of removing everything that isn’t necessary. Remove weight, leave strength. The trick here is to keep it symmetrical and square-cut. Cutting the blade tapers on the band saw was a bit nerve wracking, but it sure saved a lot of planing. 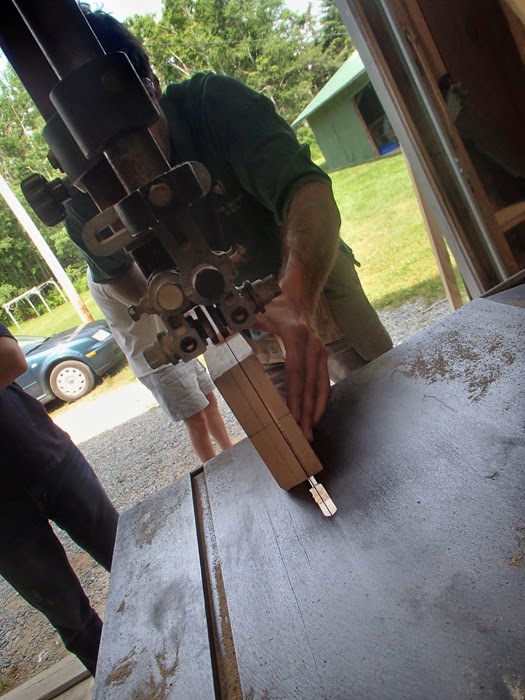 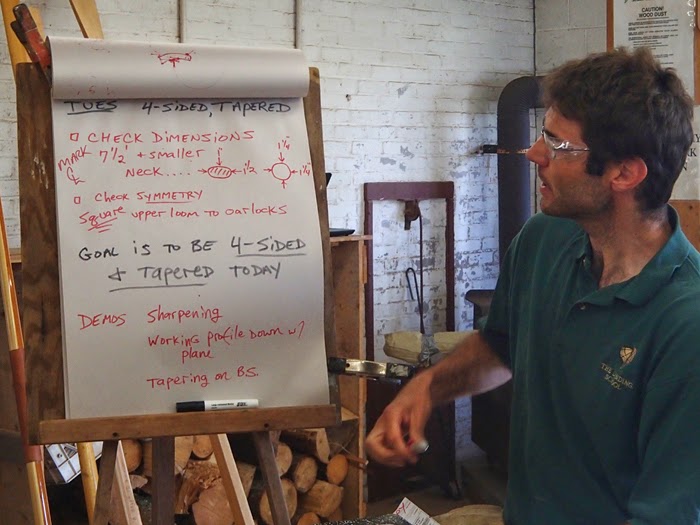 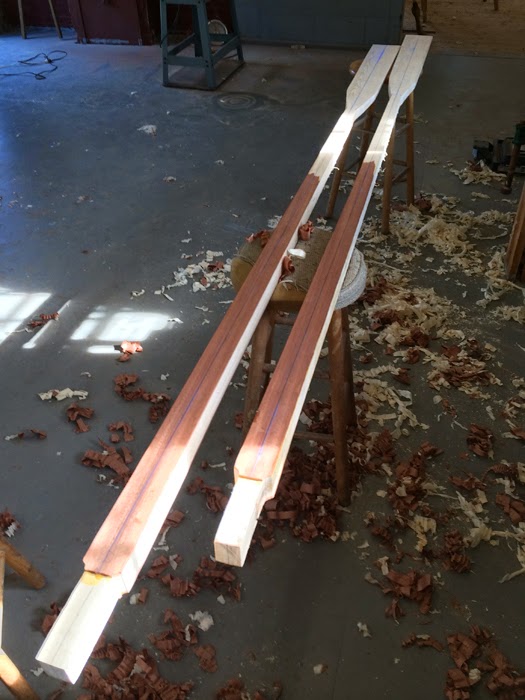 Once the basic shape is established in both dimensions, we turn the square loom into an octagon. The lower part of the loom needs way less vertical strength than it does horizontal strength, so we cut those into more of an oval at the neck, where the loom meets the blade. And we make a nice, smooth transition from that oval to the blades, which then taper from the thick spine in the center to the thin edge. 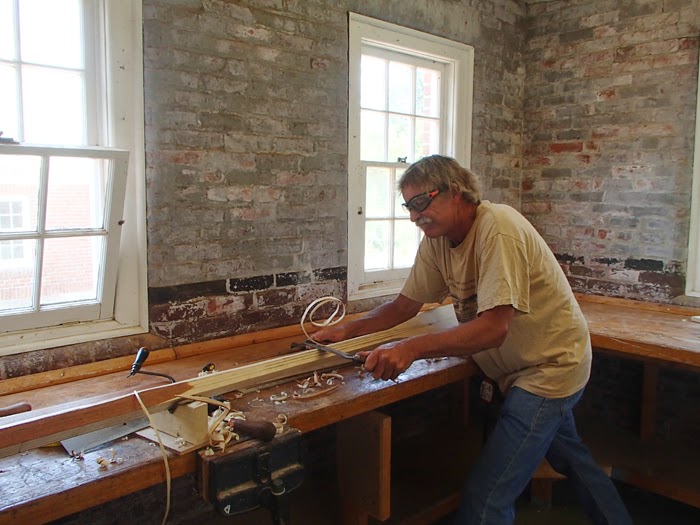 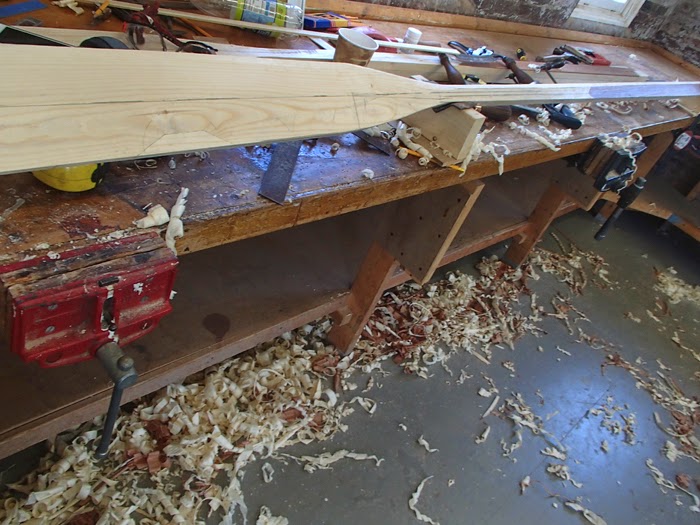 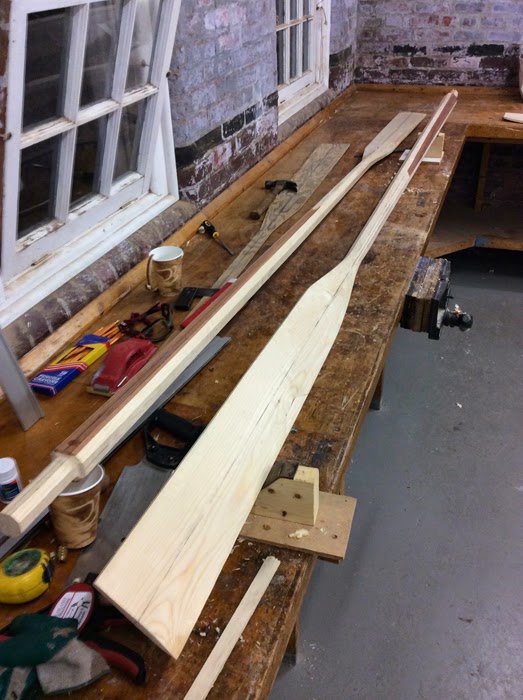 From there we turn the octagon into a sixteen-agon, thence to the thirty-two-agon and on to round. And down on the blade we begin hollowing out the wood between the edge and the spine in order to lighten the blade. So far this is all done with drawknife,  block plane, and spokeshave. The spokeshave is the real workhorse of this operation.

But each afternoon, once class is out, assuming the weather is fair, we get to go play in boats. Right off the bat I spotted a wacky oar in the boathouse. The blade was fully offset to the side of the shaft. 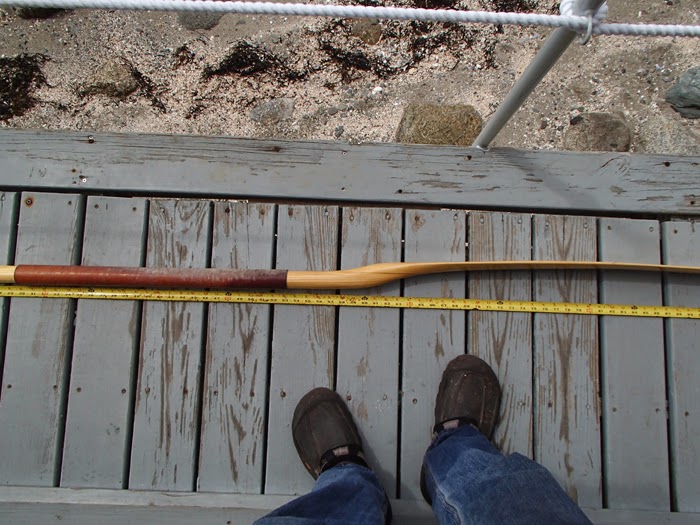 I inquired. It was one Mike Moros made specifically for sculling. I had been with Sam Maning a few years back and we all marveled at the sculling he was doing from the back of his dory. He had cut a special slot in the transom and could propel the boat foreword, backward or sideways somehow. Here’s a picture of that day. 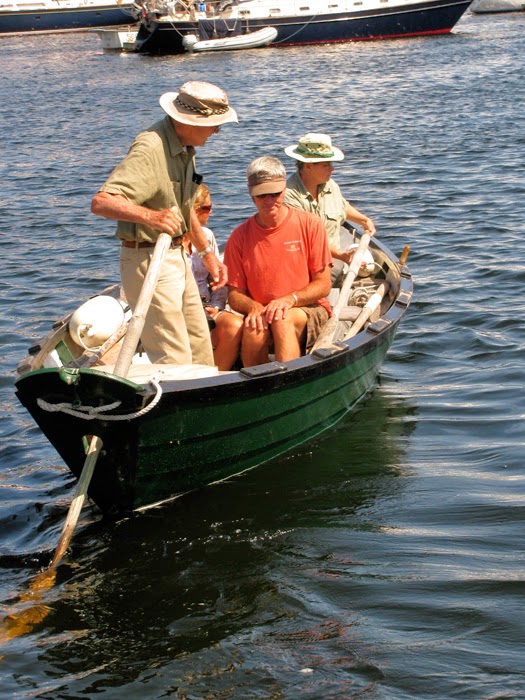 I’d wanted to learn more about sculling ever since. I asked if someone could show me how it worked. Milo got nominated to coach me. He gave me about two minutes’ worth of hints about what Sam Manning calls the “falling leaf” technique. Turns out Sam wrote one of the few treatises on this style. Turns out we had gotten to see the master ply his craft. My early attempts might more properly have been called the Falling Brad technique. But after nearly falling out of the boat a few times I began to get it. I spent my whole recess, for the three days of good weather we were lucky enough to have, working on sculling. Wow. What a hoot. 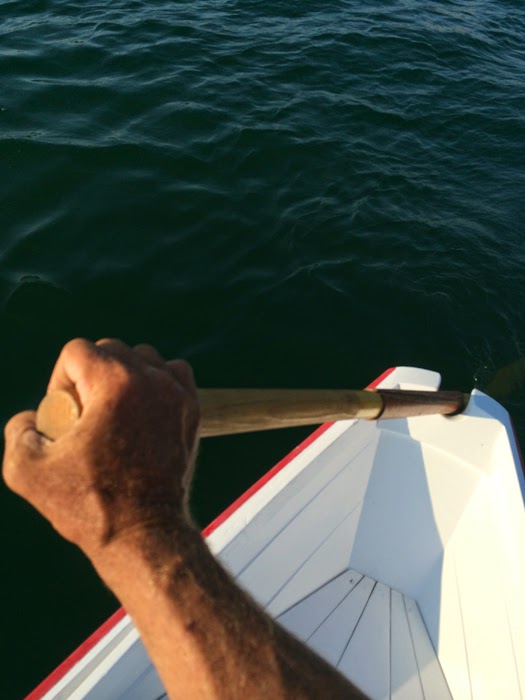 Of the four courses being taught the week I was there, the canoe builders next door were the funnest to watch. They build three gorgeous wood and canvas canoes in one week. Amazing: 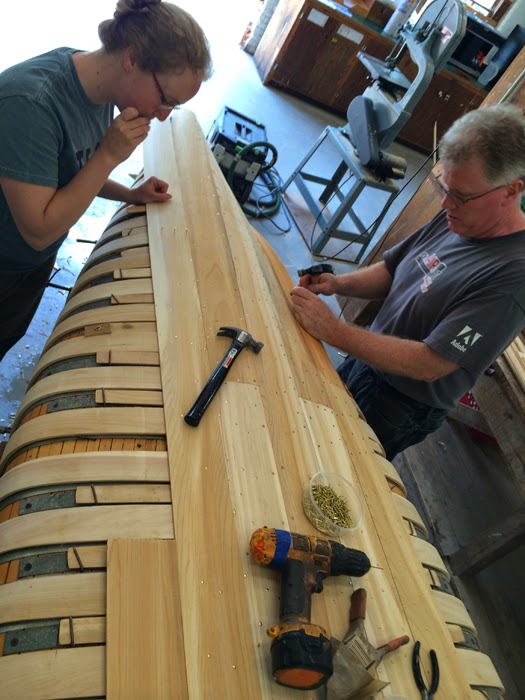 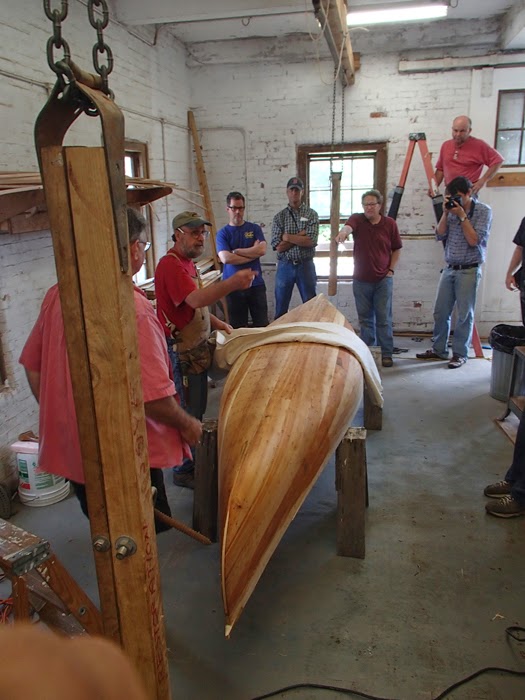 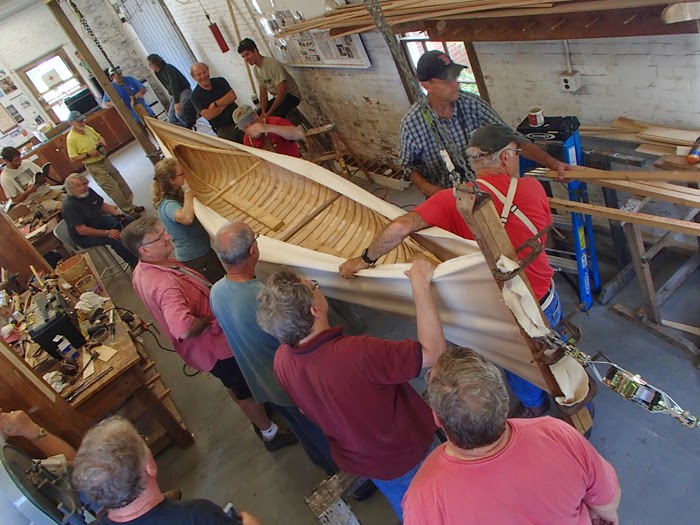 Or sometimes I would just go stare at something else, like Naskeag Point in the sunset. 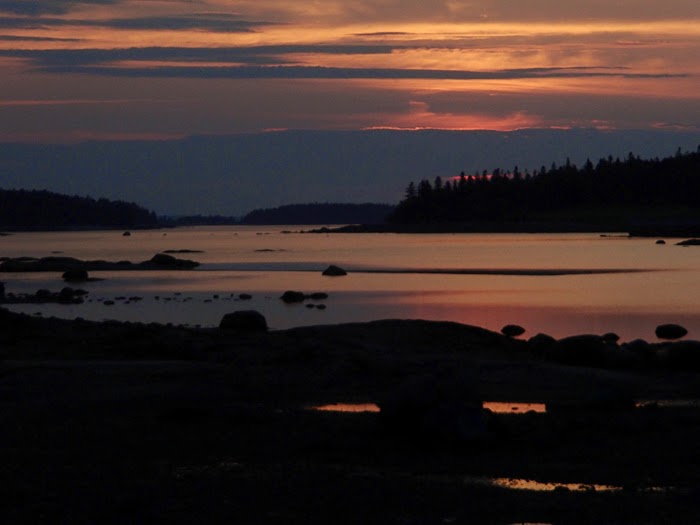 Meanwhile, back at our sweat shop, we got our oars smooth enough to sand. Some of the spruce had a few sap pockets in it. Here is my plug for one of these. 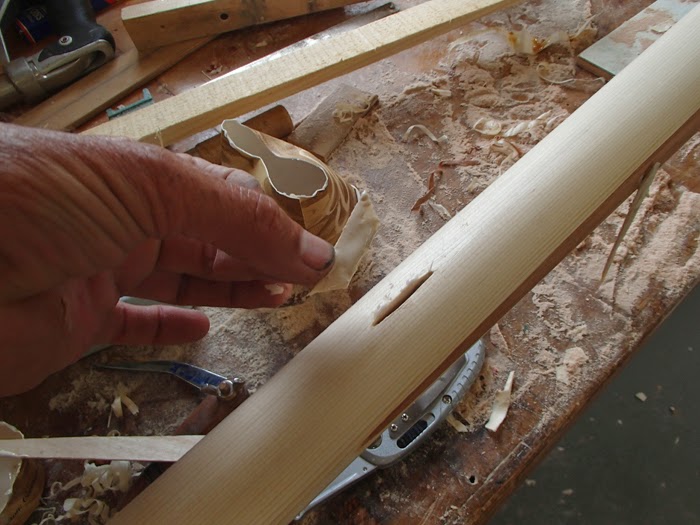 And finally it came time to balance the oars. Being a bit concerned about whether the spruce would be strong enough for Grand Canyon, I had held back from taking too much wood off the outer loom and blade. Consequently they were a bit blade-heavy. No problem. Measure how much weight it takes to get the balance like you want it. Cast some lead slugs in copper pipe. Cut off the amount you need. Drill a hole in the oar handle. 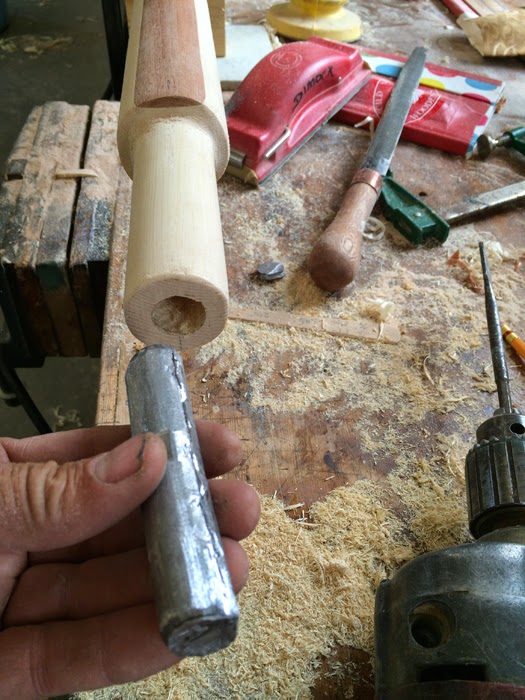 Shove the lead into the handle and cap it with a wood plug. 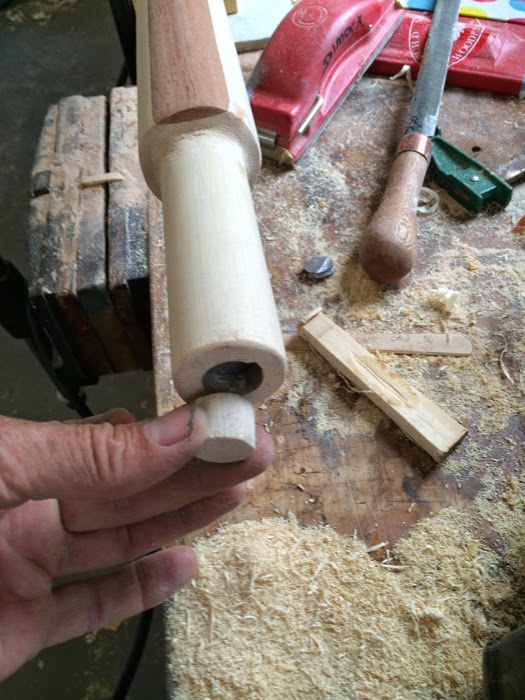 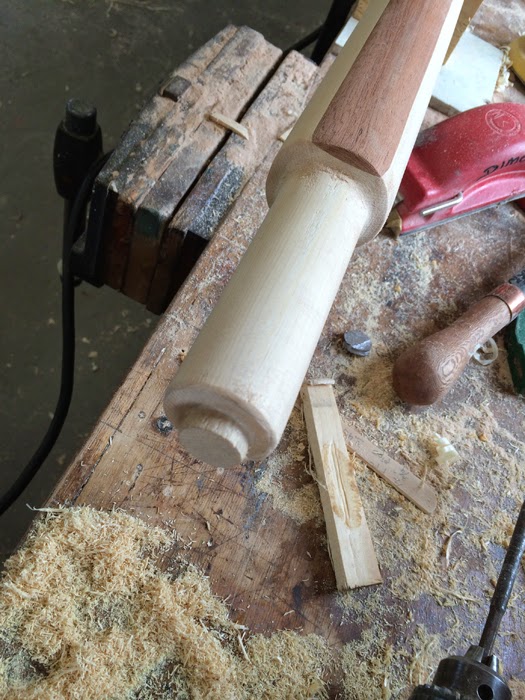 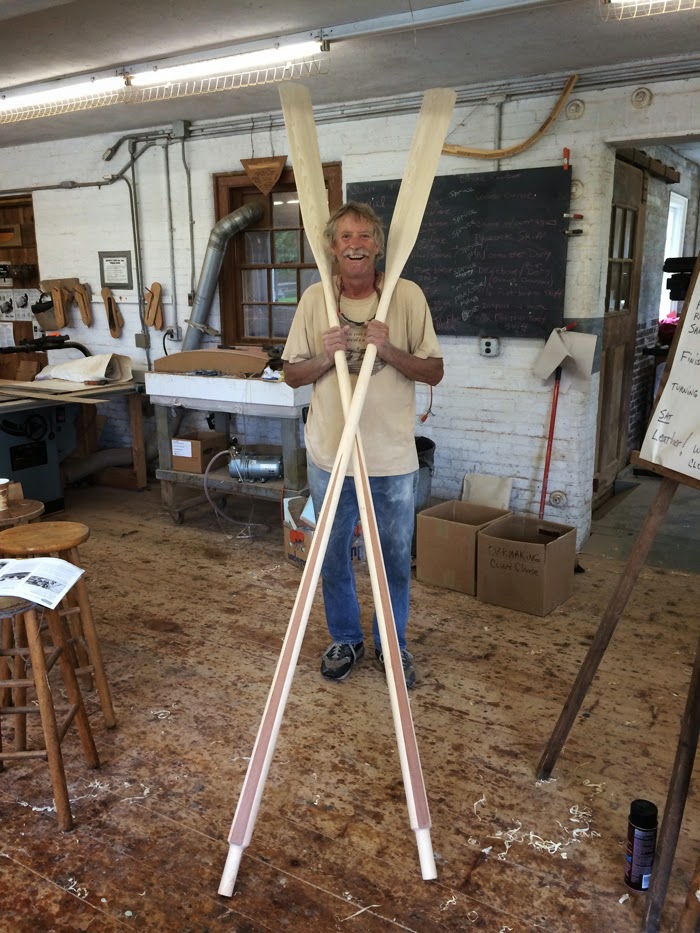