A Different Sort of Boating

A couple weeks ago Lora and I headed west to do a bit of paddleboarding on the lower Colorado. Oddly, we could not cajole any of our friends into joining us. This might be termed foreshadowing.

For night one we chose a camp at the foot of Davis Dam, a ways upstream of Bullhead City. We set up camp and launched mid-afternoon with no particular destination in mind, with a list of taxis numbers and a cell phone in our bag. Interesting terrain. 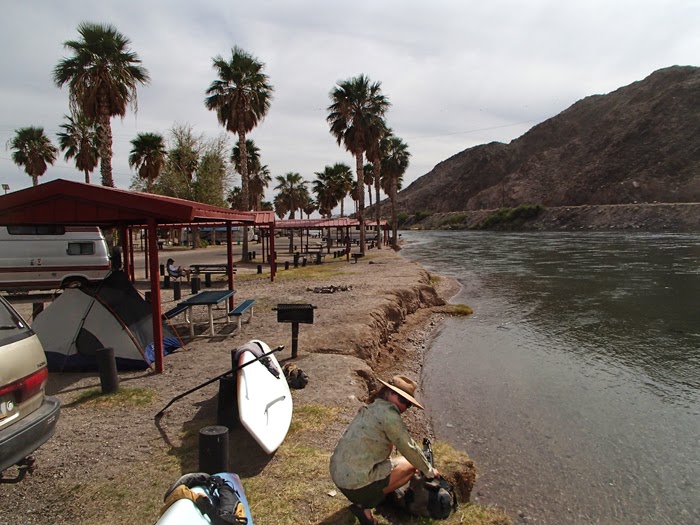 We were still getting used to this stand-up thing, as you can see by my stance. I am trying here to eddy out behind a flooded palm tree, to no avail. The water was pretty high that day. 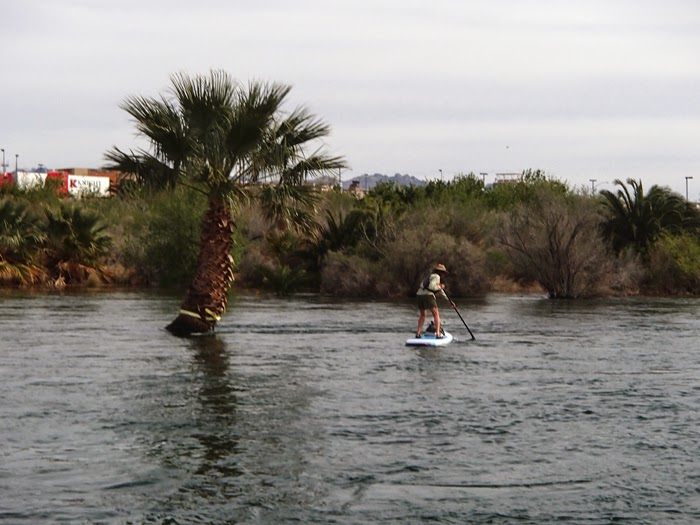 The scenery was not familiar to us upper Colorado canyon boaters. This is beautiful Laughlin, Nevada. Most of the turbulence came from water taxis ferrying victims from Bullhead City over to the casinos in Laughlin to have their pockets drained. 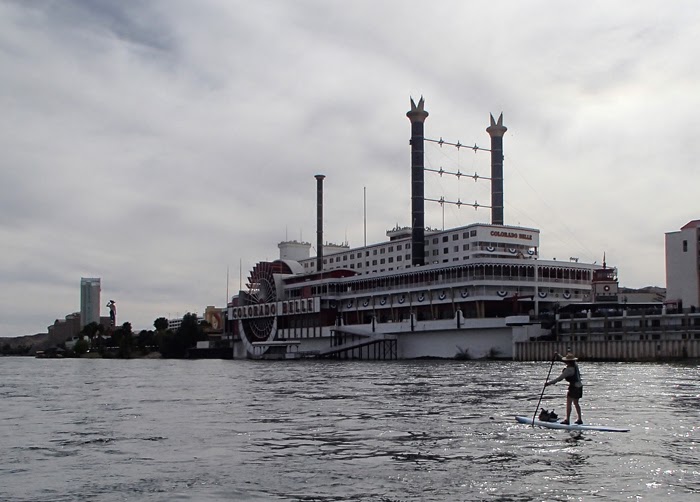 Of our three tentative takeouts, we made it eleven miles to the furthest one and pulled out on the south side of Bullhead City at Lazy Harry’s Bar & Grill. 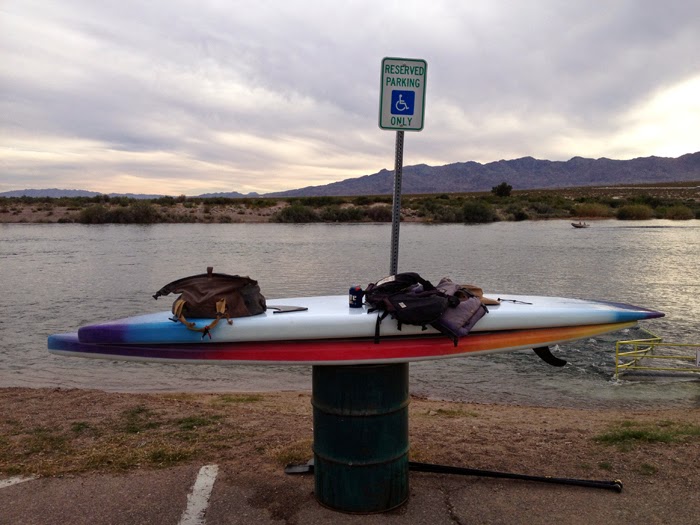 Lora grabbed a taxi to retrieve the car while I took in the local scenery. 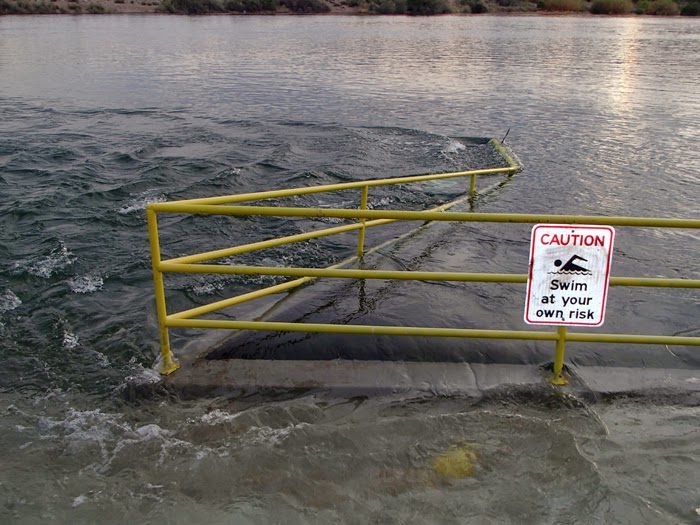 We got up early and drove downriver to Topock where Interstate 40 crosses the Colorado. This is the start of Topock Gorge, a scenic wildlife refuge with no settlements along the way. We figured we’d paid our dues to civilization the previous day and were looking forward to a bit more of a wilderness paddle. More foreshadowing here. 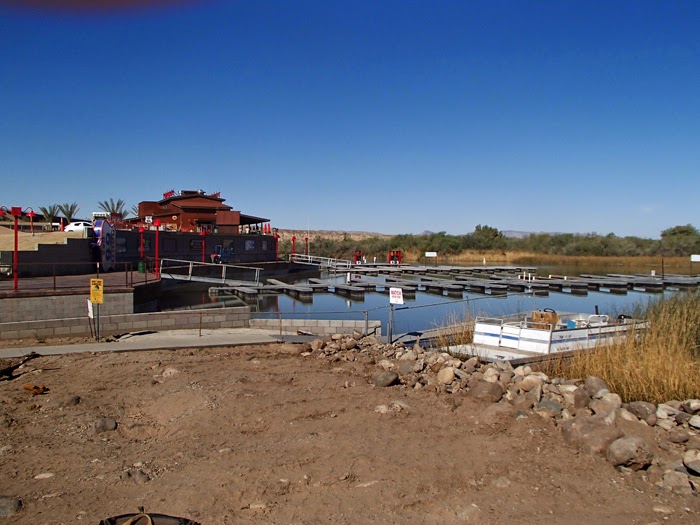 At Topock Marina we met up with Henry, who I had found online earlier, and shuttled my car down to Castle Rock, the first takeout below Topock–still well above Lake Havasu City. We finally launched around ten for the fifteen mile paddle. There was a slight upstream breeze but nothing to worry about. 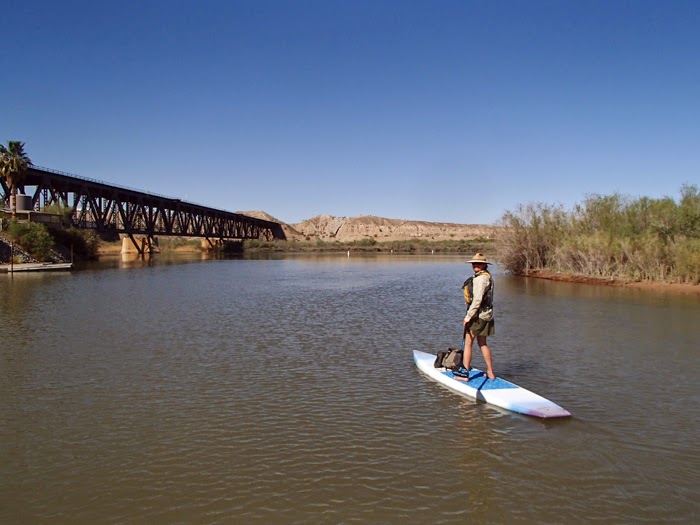 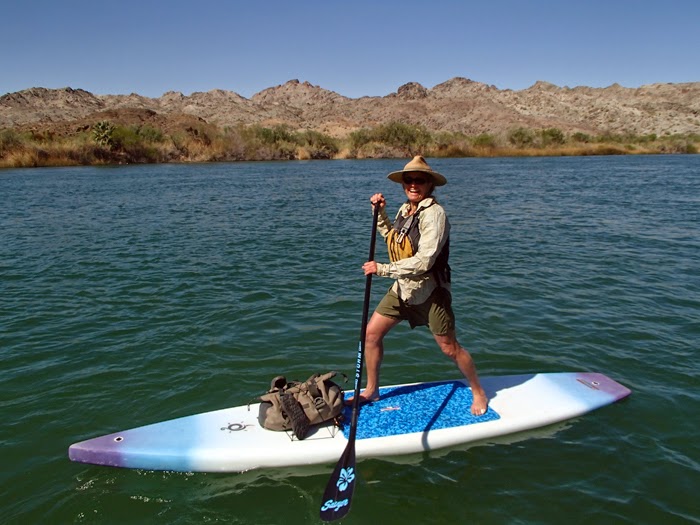 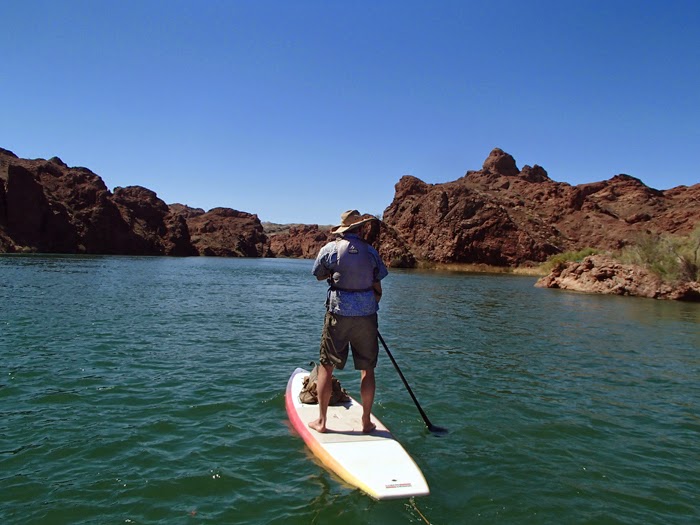 The gorge really is pretty and the central part of it has a no-wake zone to slow down the vacationing motorboaters. Still a pretty cool trip. But as we left the gorge three things happened. The current died out. The upstream wind picked up. And a swarm of dick boats roared upstream to share their cacophony and wakes with us.

Turns out, upon subsequent conversations with friends, that Lora and I might have been the only two people on earth that were unaware of a few phenomena.
1) Working people and students often celebrate a thing called “Spring Break” about this time of year.
2) The favorite way for many to celebrate Spring Break is to go to Lake Havasu and rent dick boats.
3) Dick boats can be defined as unconscionably overpowered, hideously consumptive, dangerously fast, ear-bleedingly loud boats, driven in a dickish manner, by dicks.

My friend Dan later pointed out that it was our own damned fault and what were we, nuts? But we didn’t know. So we paddled on in dying current and increasing upstream winds into the heart of the annual dick boat storm. The wakes were bad enough, but the deafening blasts of unmuffled (or perhaps amplified?) five-hundred horse engines shrieking past was beyond painful. We stopped for lunch and pondered our predicament. Only one way out. Keep paddling. 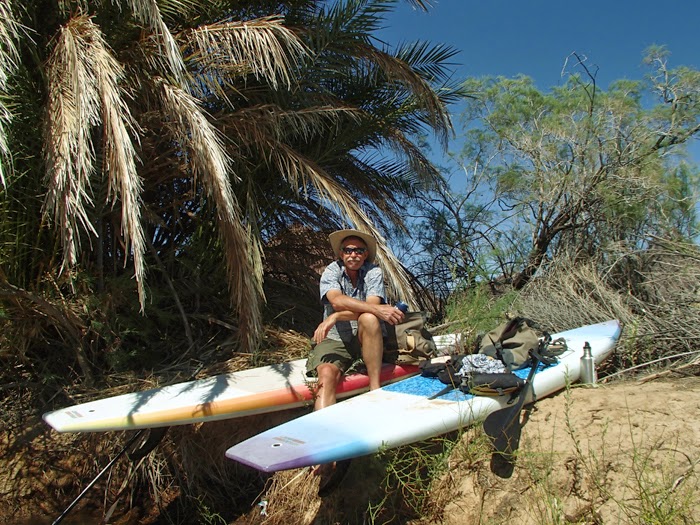 Late that afternoon we finally found the slot in the reeds leading into Castle Rock Bay and our ordeal came to an end. 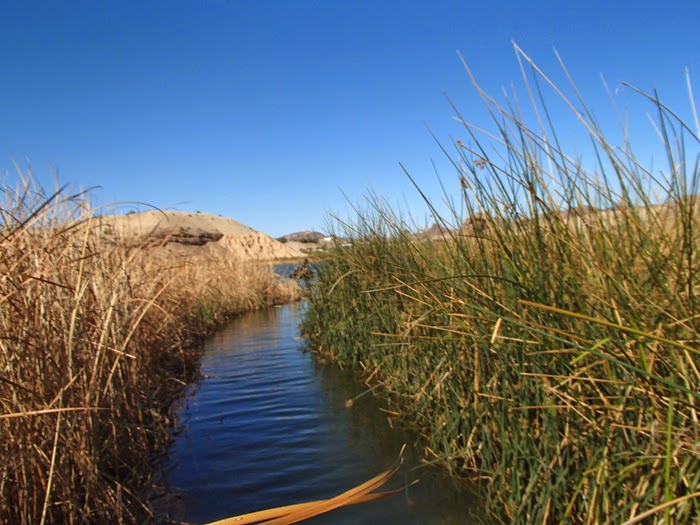 We were exhausted but we’d learned a few things. We got way more stable on the boards due to the incessant and erratic wakes. We got really good at paddling hard and long on both sides. And we learned about dick boats. But I guess we still needed to learn a bit more.

Our destination the next morning was a folk festival near Phoenix, so I had researched online and found a state park along the way, in the mountainous terrain down below Parker Dam, on a bend in the river. It looked lovely and we reserved the site that appeared to be closest to the river. Site R. No one else had reserved any of the spots anywhere near, so we thought we might get a little seclusion. More foreshadowing. 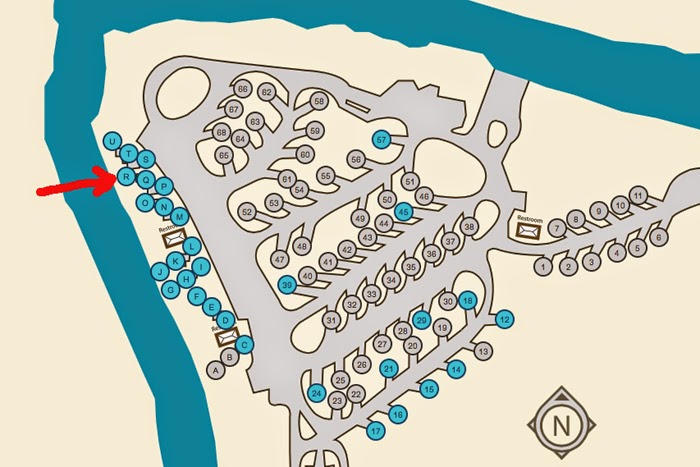 Turns out the campsites are a series of concrete bunkers that share cinderblock walls with the site next to them. We were too tired to do much but laugh, so we settled into Bunker R and went down to the shore for a beer. Ahhhh, but it turns out Buckskin Mountain State Park is on a dick boat speedway. 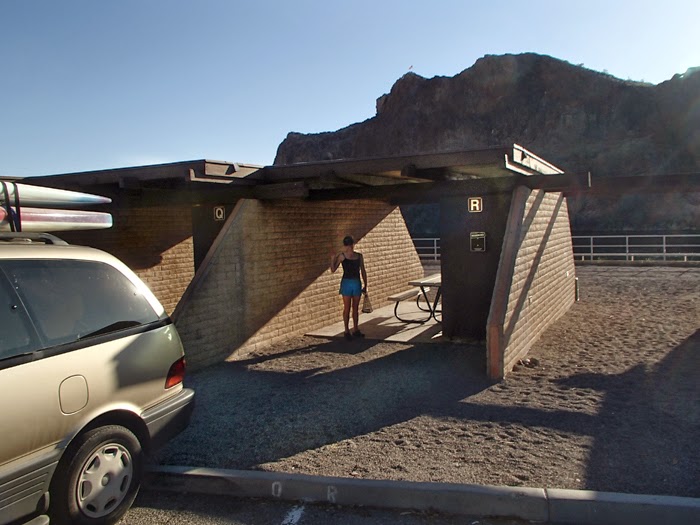 Lora began to lose her sense of humor. I went out for one last paddle to get the kinks out before calling it an early night in the back of the van. 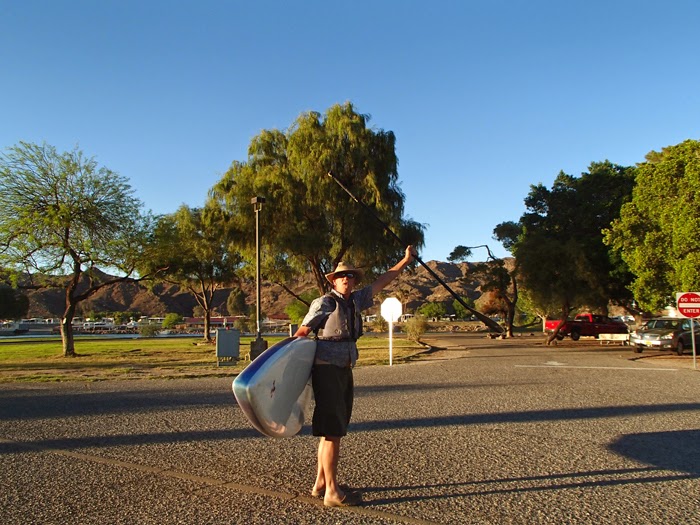 We had a few strong drinks to help us sleep, pulled the curtains, and laid down. We hoped the dick boats would go to sleep after dark, but that’s not what they do. They drink. And take off any remaining mufflers. And drink some more. And go boating. As fast as they can possibly go. Back. And forth. And back. And forth. And at sixty miles and hour it doesn’t take very long to go back. Or forth. And out on this bend of the river the surrounding cliffs work nicely to amplify and reverberate the roar of the engine screaming by.

Well, somewhere in the middle of that long, wretched night one of the dick boats went ahead and drove full speed straight into the cliff across from us, exploded, and commenced to sink. By the time we were awake and alert enough to comprehend what the ruckus was, 911 was on the way, the fire trucks were all around us, and the life-flight helicopter was landing pretty much on top of us. That went on for a few hours before subsiding to the baseline roar. Here’s what remained the following morning. 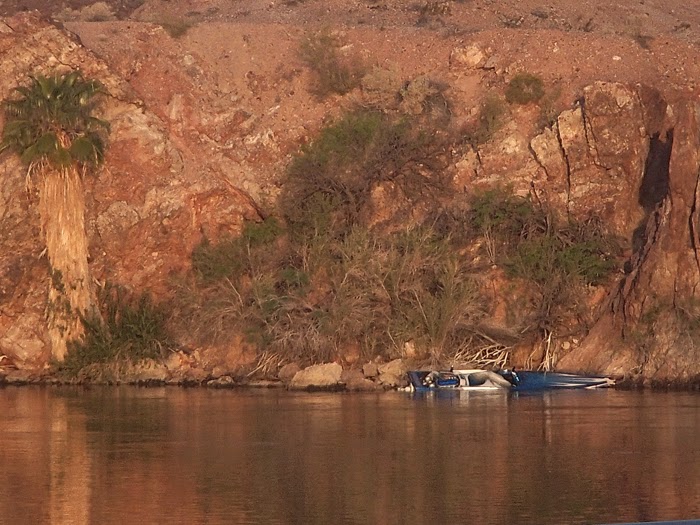 Here is the lay of the land from a peak we hiked to after our morning coffee. 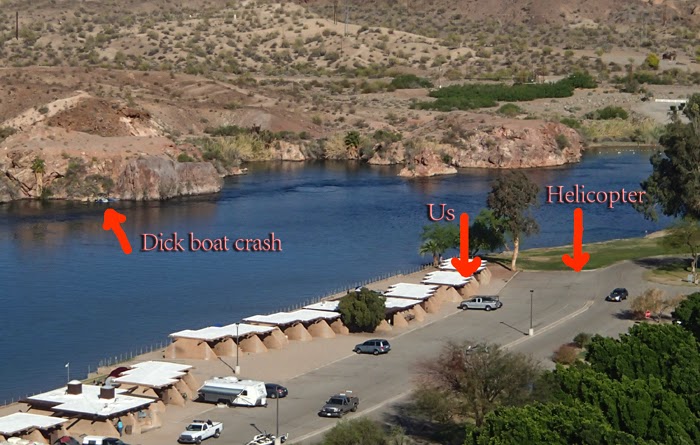 Well. Yeah. It was an adventure. I can’t say I recommend paddleboarding the lower Colorado, at least not that time of year. But we did learn a few things, got a lot better at paddleboarding, and got a few more stories. And the Glendale Folk & Heritage Festival was lovely.