Turning Tombigbee back into a boat 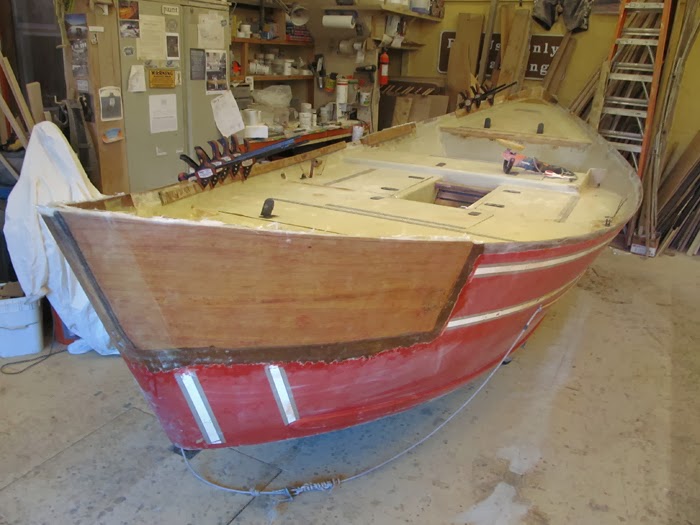 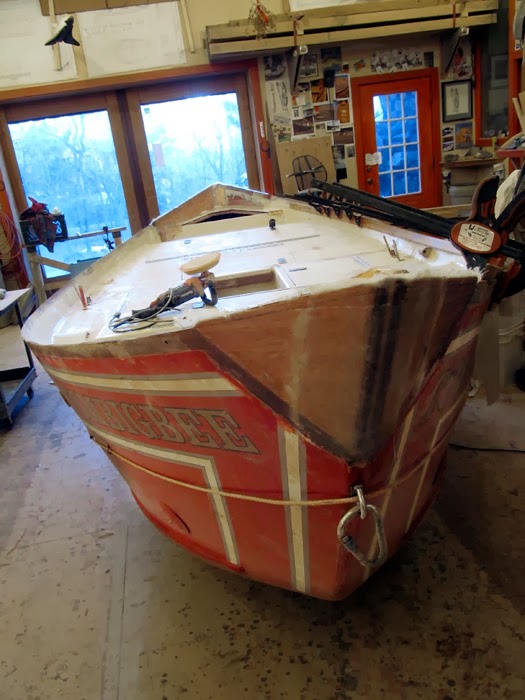 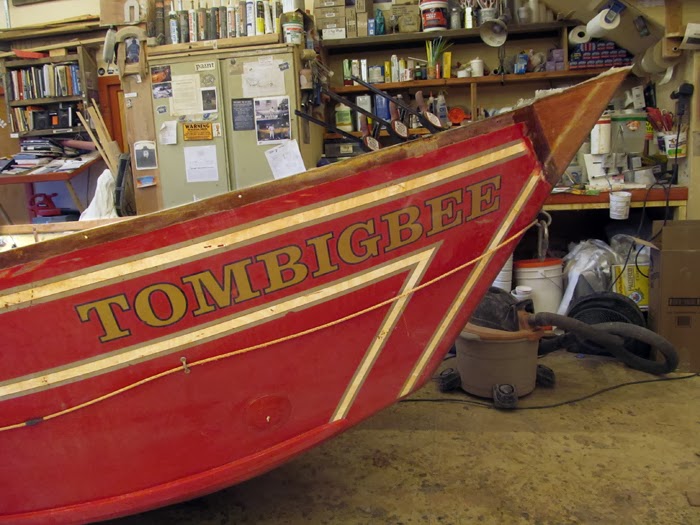 Fifty shades of gray. I tinted the flow coats of resin gray with a mix of white and black pigment, so Scott will have less trouble covering it with the next paint job. But of course every batch of resin I made was a different shade of gray. Touchy stuff, that pigment. A little goes a long way and all over the place. Oh well. 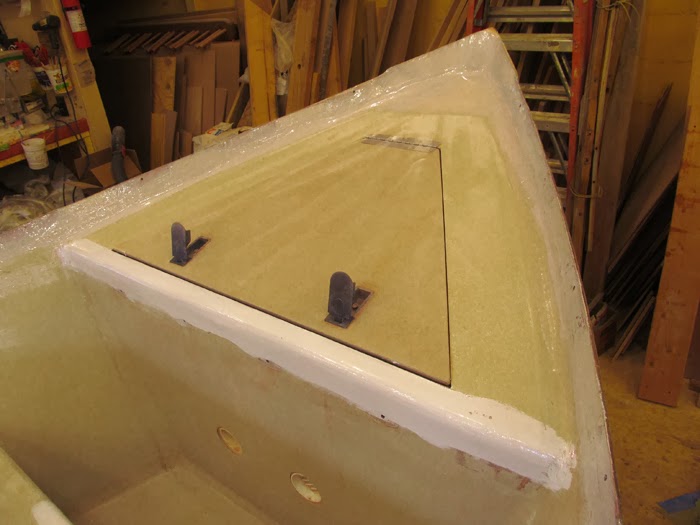 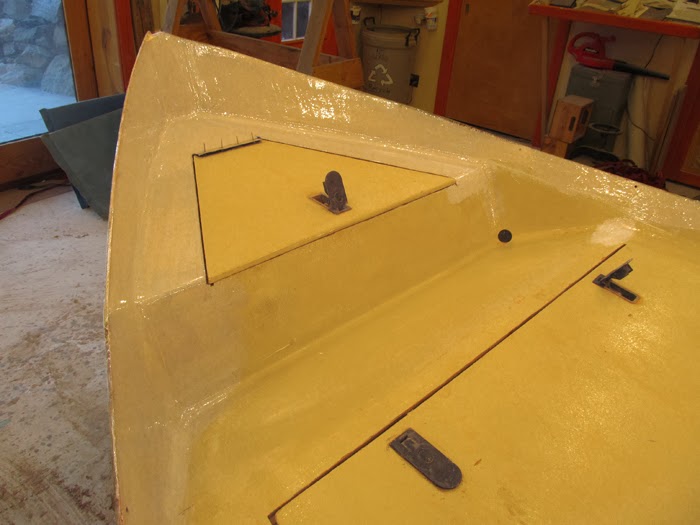 Making wide ten-foot boards into long skinny ones. Got some nice grain matches on the scarf joints. 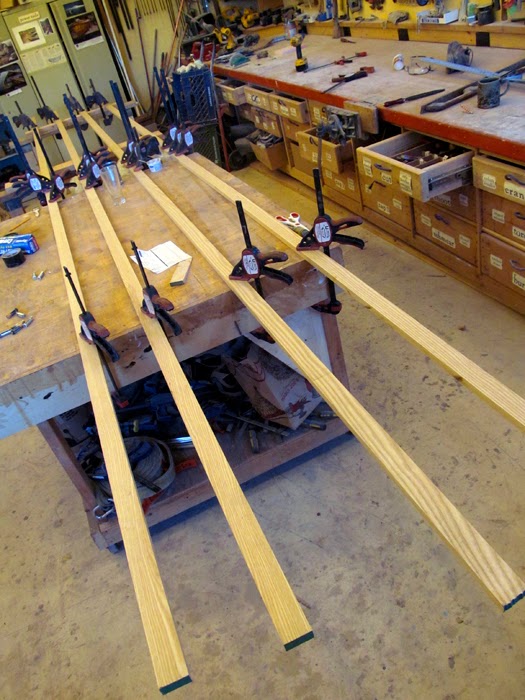 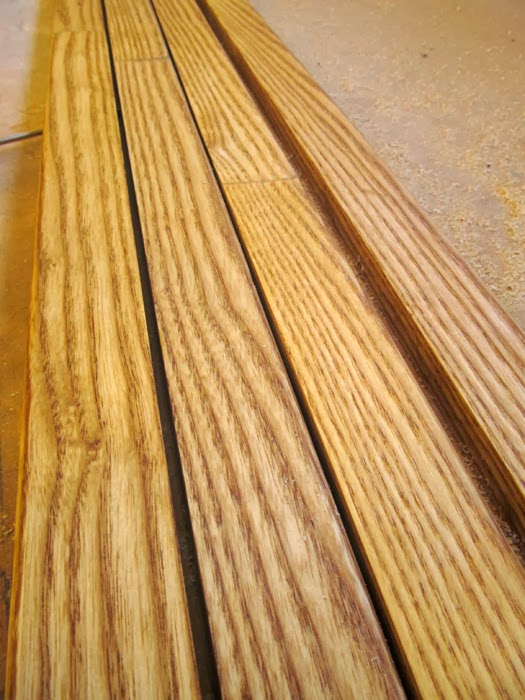 This pile of walnut shavings goes for about $10 a board foot. 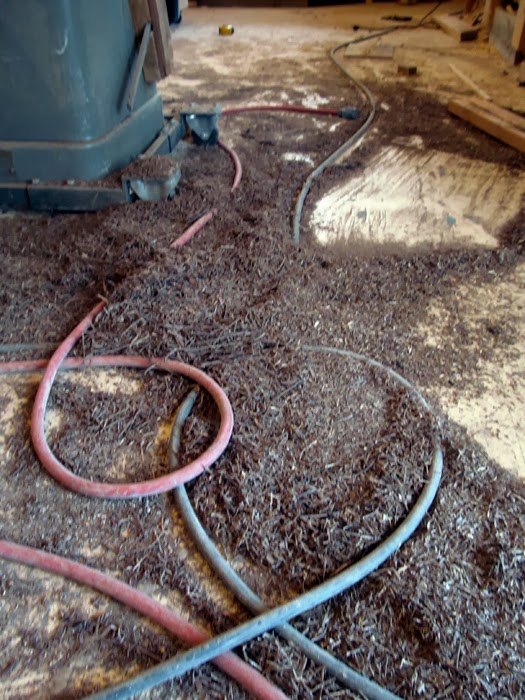 And all I end up with is this collection of little brown blocks. 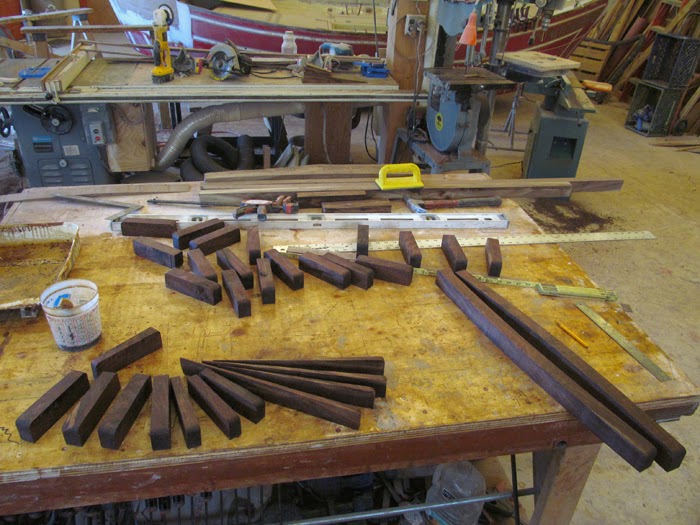 Which get screwed to the inside of the boat. In a fit of lucidity, I drilled all the bolt holes on the drill press beforehand, so those holes will act as guides to drill through the gunwales and come out relatively centered. 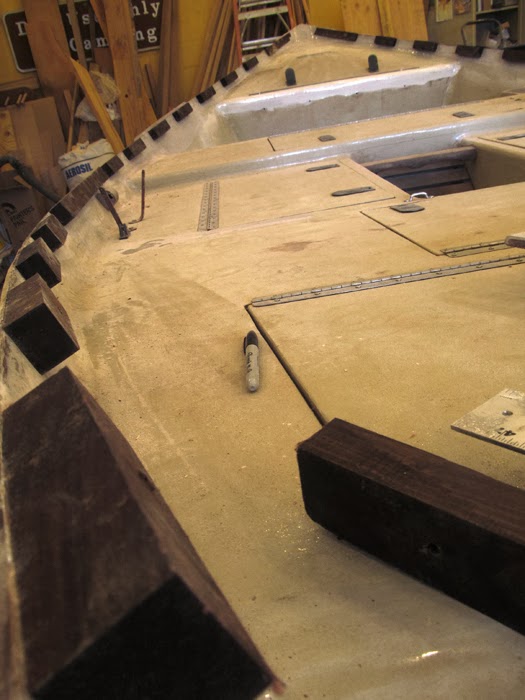 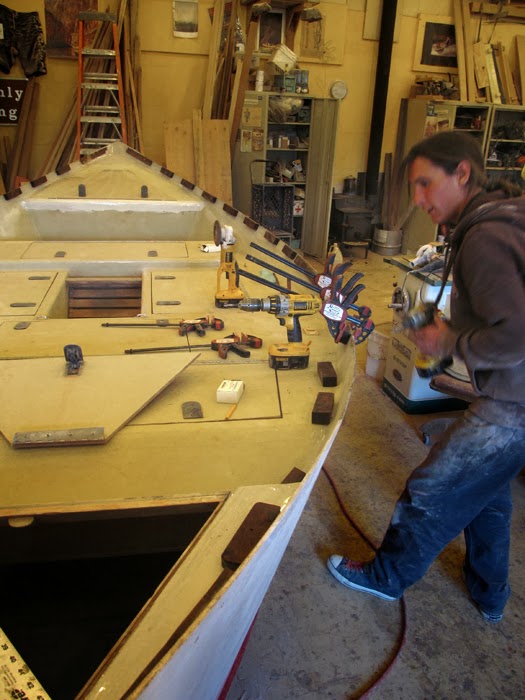 Test-fitting and marking the outer gunwale. The current ash stock in Flagstaff was just long enough that, with the scarf joint, I had less than an inch to spare. Whew. 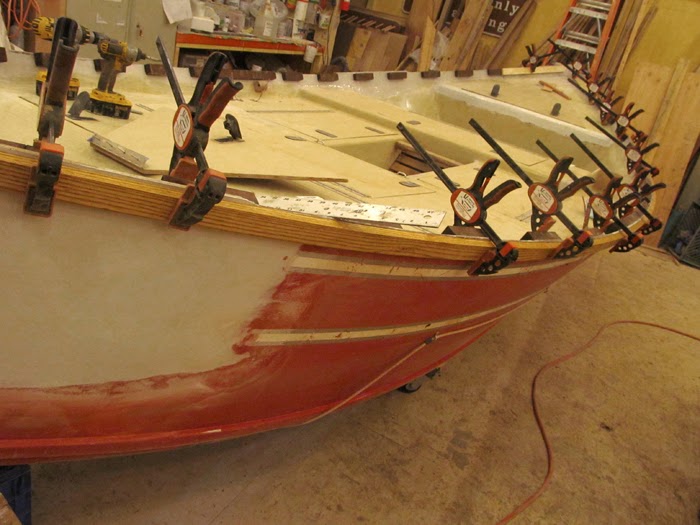 Now for the money cuts. The inner gunwales have compound angle curved cuts that need to fit within a sixteenth of an inch or preferably less. My system, which I learned somewhere, I forget where, is to cut a template for each end that fits perfectly. Clamp them in place and measure the distance between them. Then transfer all those angle and measurements to the final gunwale board. It works pretty well. But something in the way wood stretches as it bends make them always come out a little long. Which is way better than being a little too short. Here is an end template. 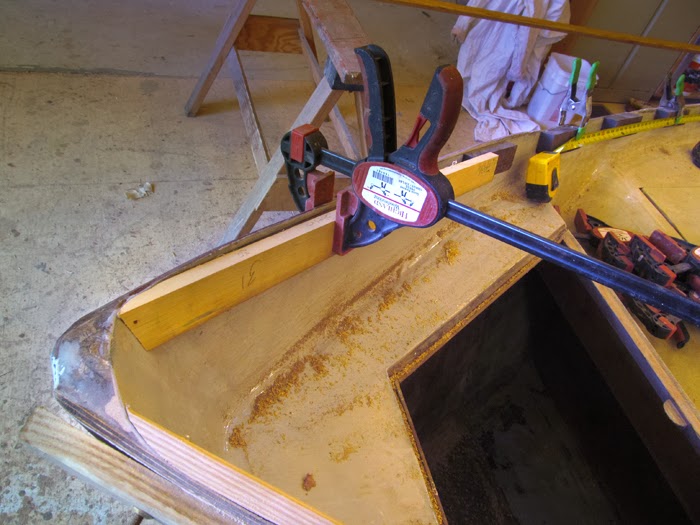 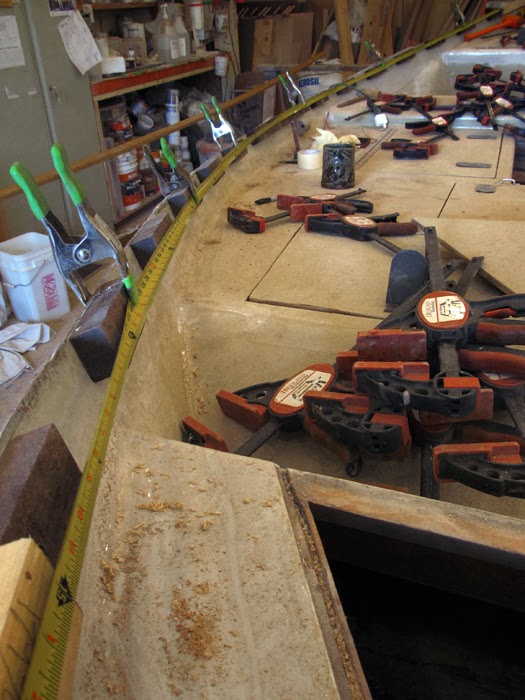 And it’s a touch long. Here are the final marks to re-cut the end to fit. 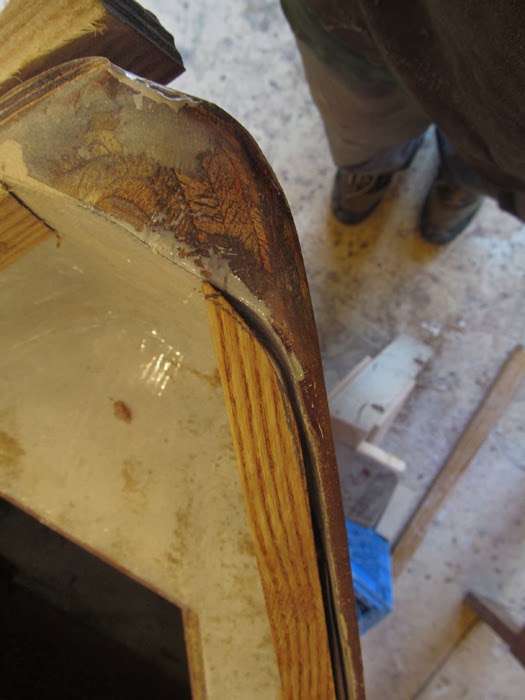 Next I drill through the gunwale blocks and the inner gunwale, sliding the bolts in to make sure nothing slips during the next process. Then I pull the center clamps and sneak the outer gunwale on, wrapping the gunwale around clamp by clamp. 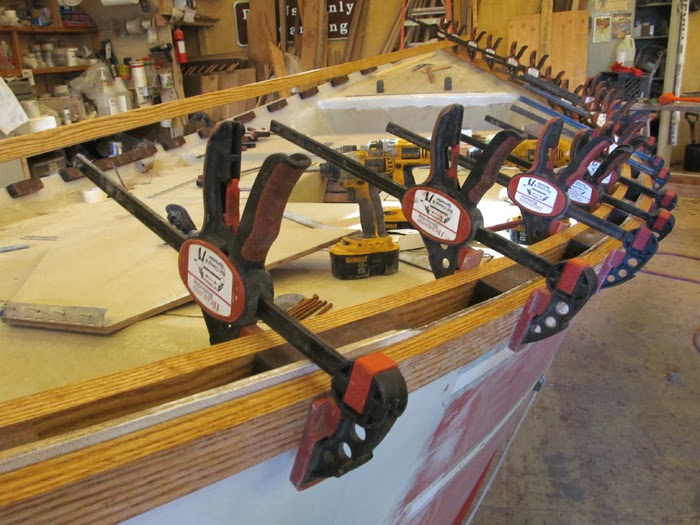 Finish drilling the holes and bolt her together. 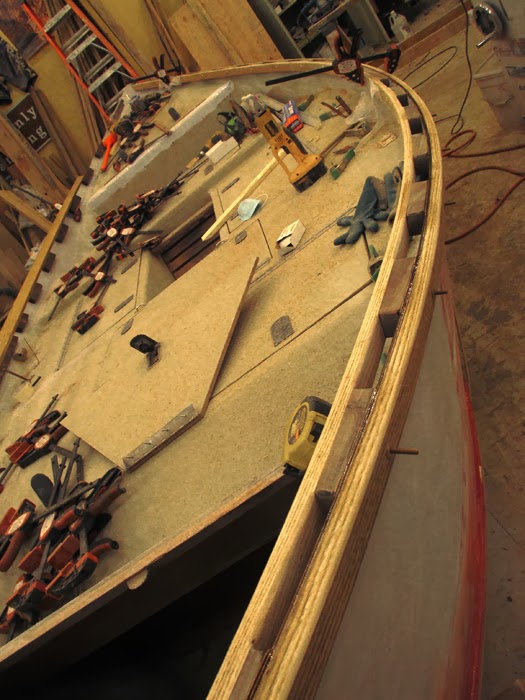 Wow. It worked again. Sand and rout the gunwales, oil ’em up, and roll the boat over the begin the bottom work. Here we are sawing out the pulverized wood. 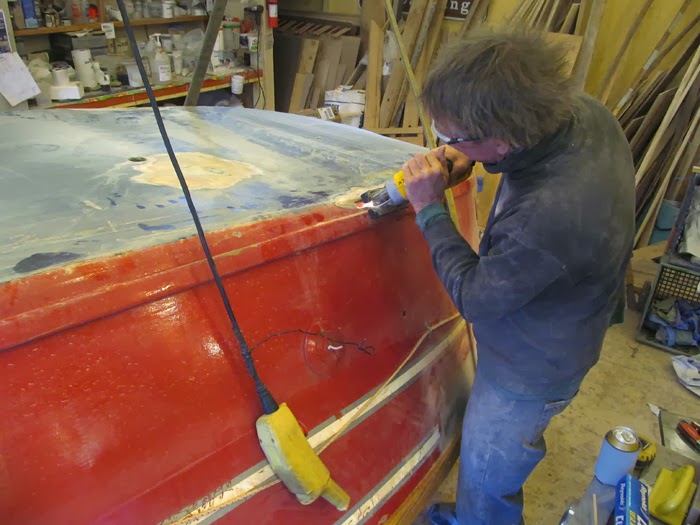 Roy giving me the report from inside the hatch. 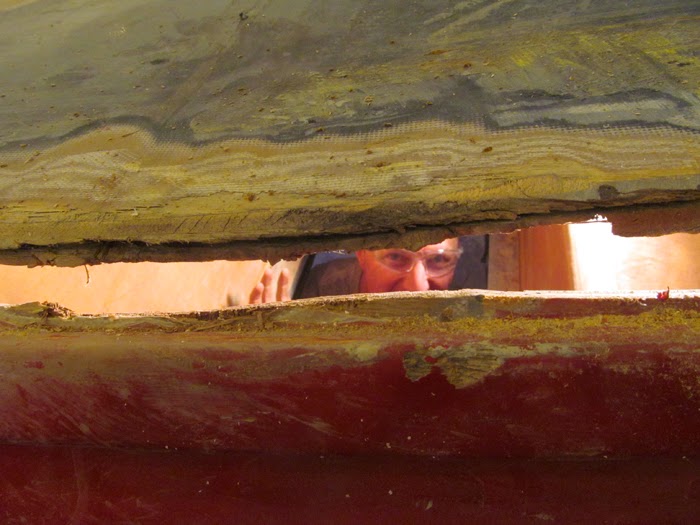 The bottom was beginning to delaminate next to this hole so we spooged it full of epoxy and clamped the bejeezus out of it to make it back into plywood. 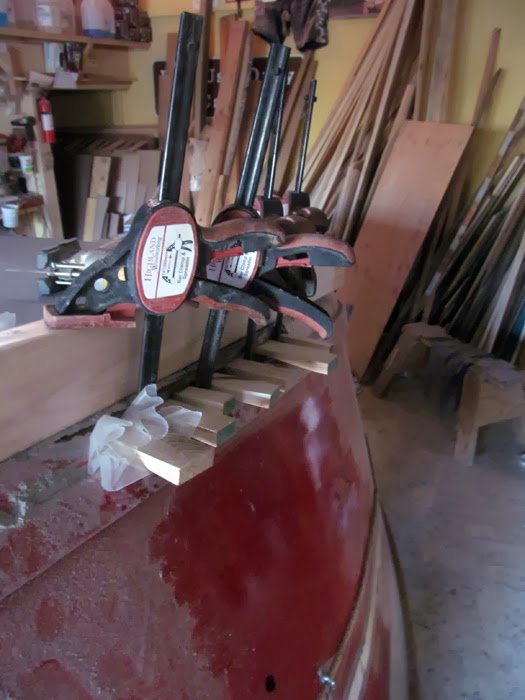 The Tombigbee will float again. 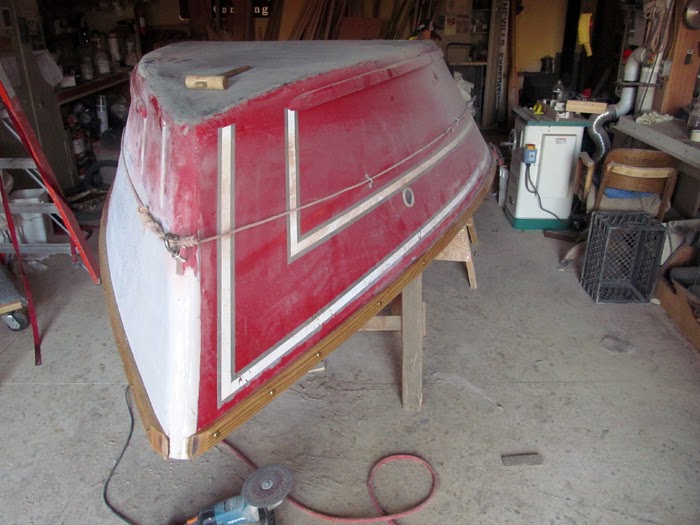