Scottman, an old boatman friend from Martin Litton days at Grand Canyon Dories, stopped in last August with a sad boat. It was a dory built by Montanan Paul Butler back in the ’80s and was one of six Butler boats in Litton’s fleet. Martin, who named all his boats in memory of natural wonders desecrated by man, christened it Tombigbee, due to the building of the Tennessee-Tombigbee Waterway–the two billion dollar, 234-mile waterway boondoggle connecting the Tombigbee and Tennessee Rivers. It was the largest earth moving project in the history of the world and remains little used to this day compared to its boosters’ predictions. Tombigbee is Choctaw for coffin, or coffin maker. Hmmm.

Anyhow, Scottman rowed the boat and its name soon corrupted to Tombigamy. After Martin sold Grand Canyon Dories, Scottman got the Bigamy and has rowed it as a private dory ever since. Unfortunately the V-Wave in Lava Falls decided to turn it upside-down this past summer and send it through the shallow, rocky right side of Lower Lava upside-down. Damn. Not all of it came out the bottom end. 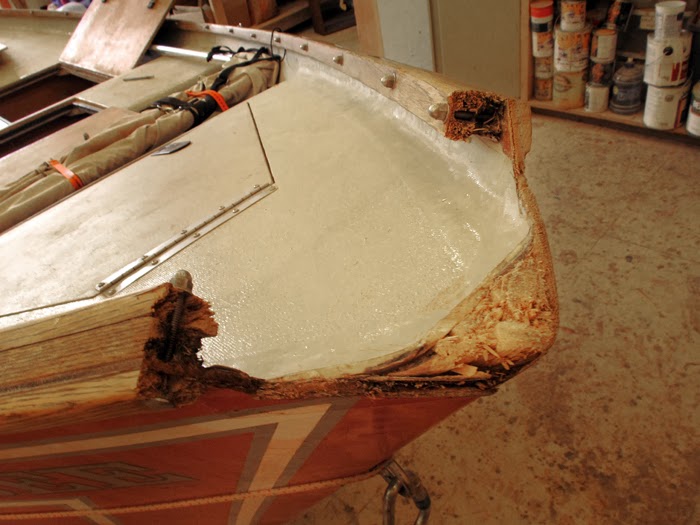 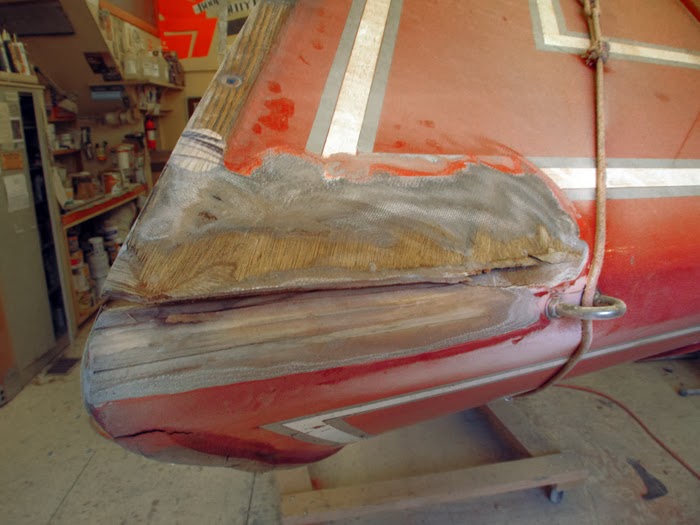 Oh, and there was some bottom damage somewhere along the way. 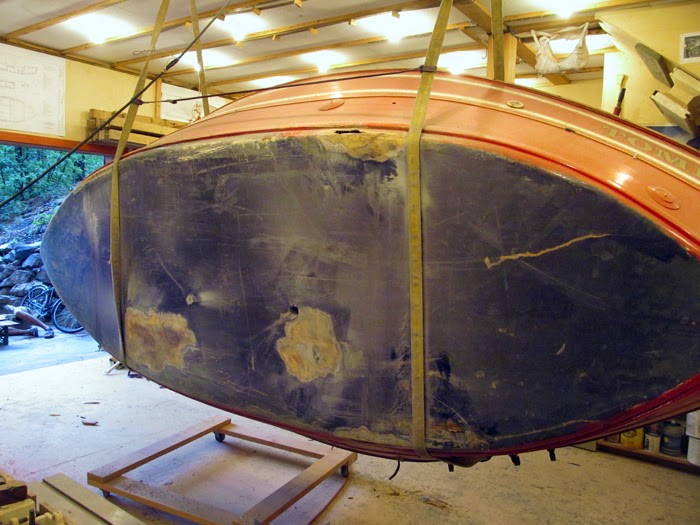 So I ground her down pretty good in early August. 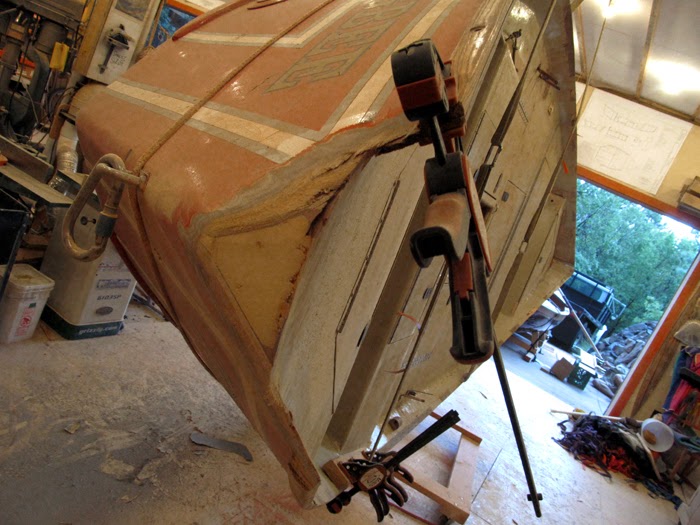 And sent her up to the attic to dry for a month or two. Okay, five months. Things came up, okay? 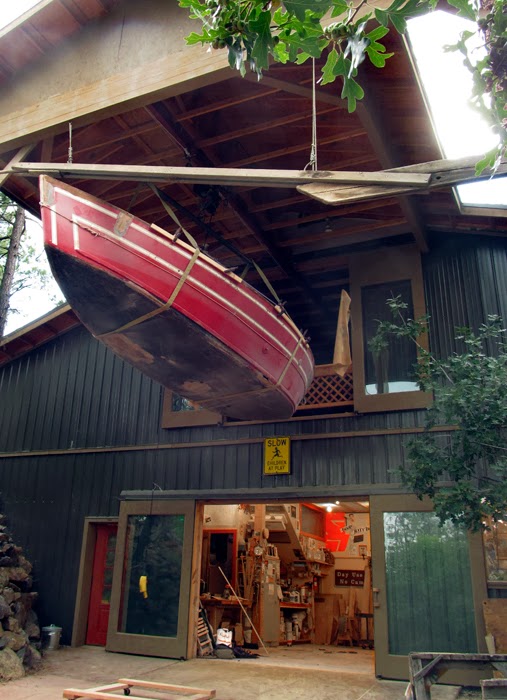 So finally on Wednesday, with the infestation of paddleboards finally exterminated, I brought the Tombigamy back down. Roy and I lit into her with saws and grinders. 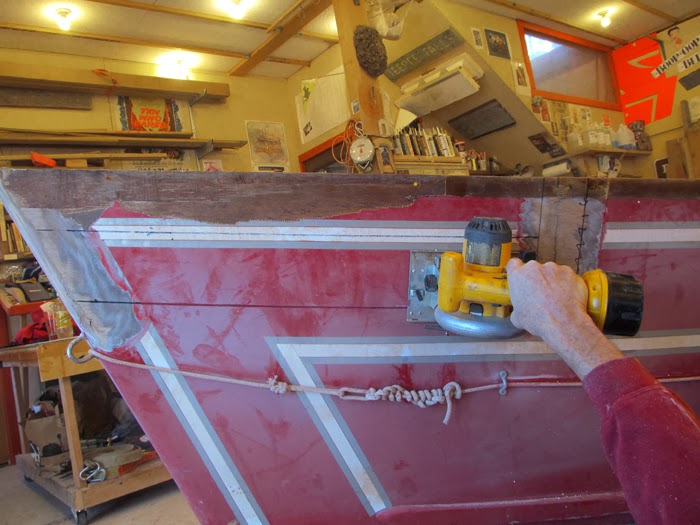 We scarfed in a new bit of sidewall and rebuilt the stern hatch. And added a bowpost. 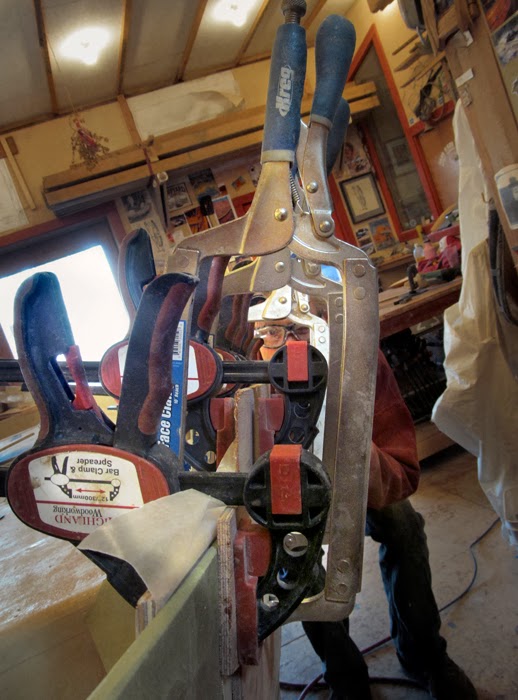 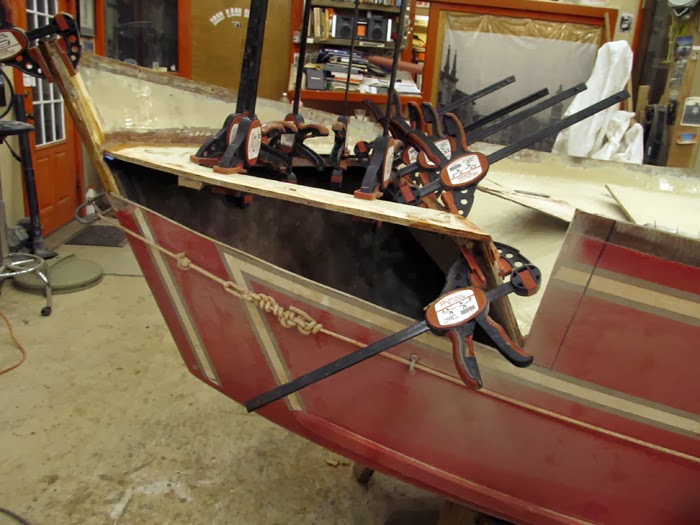 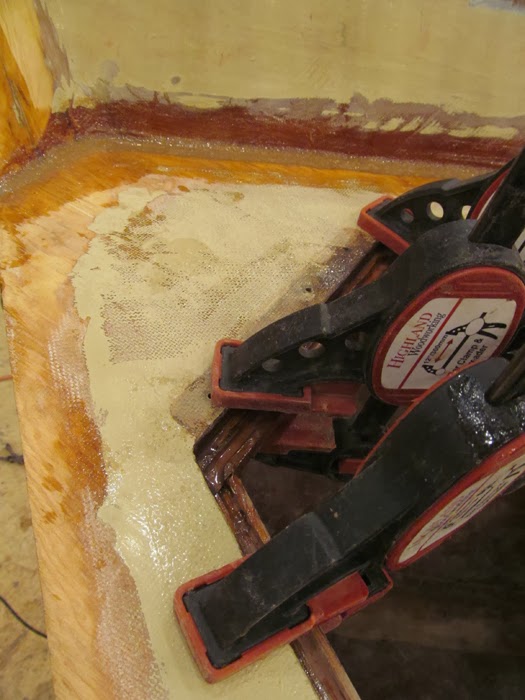 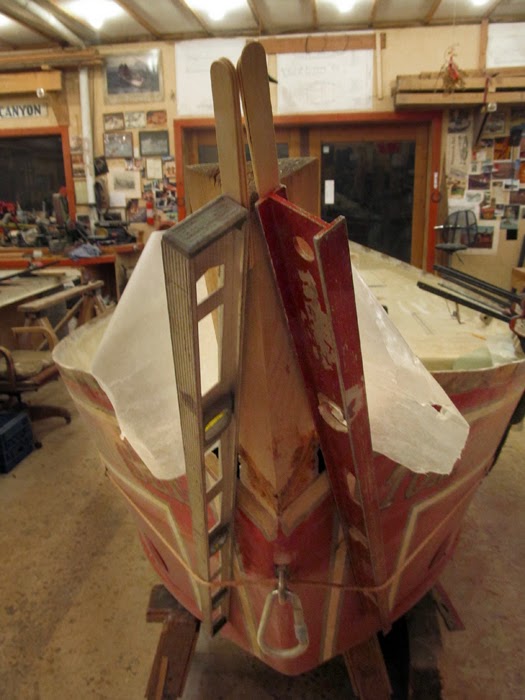 On Friday I scarf-cut the stern wall. 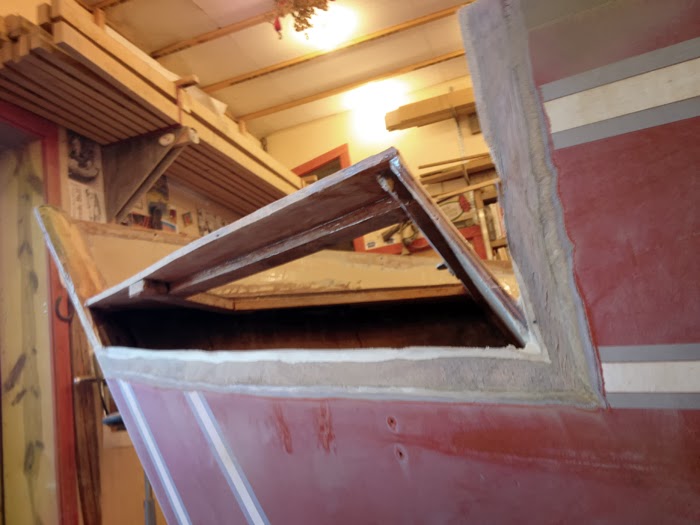 And glued in new stern and bow sides. 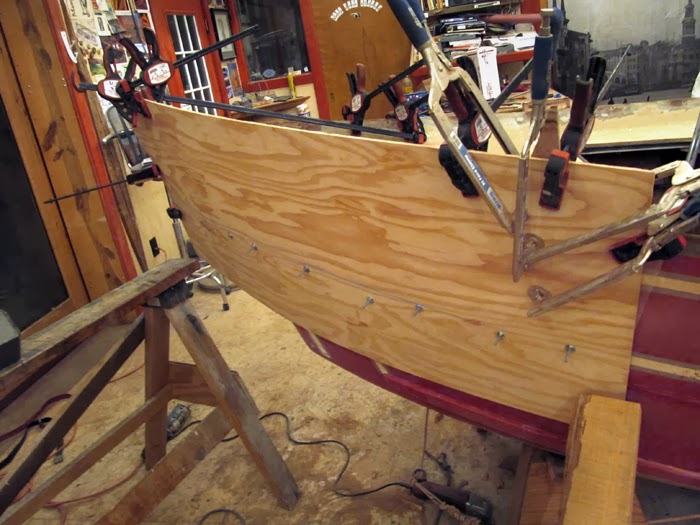 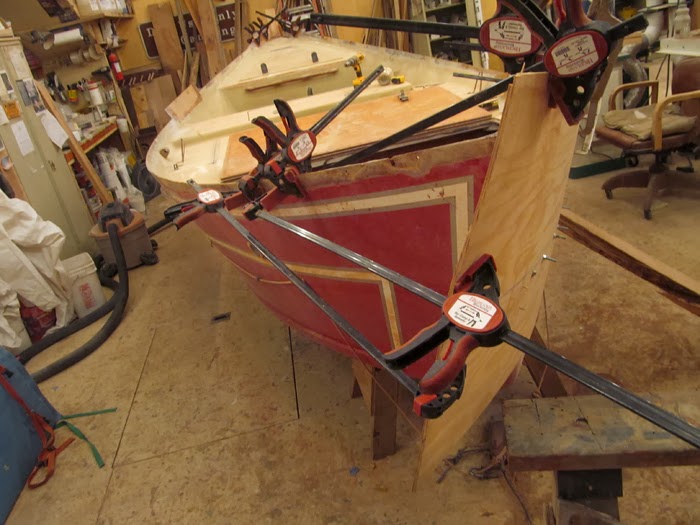 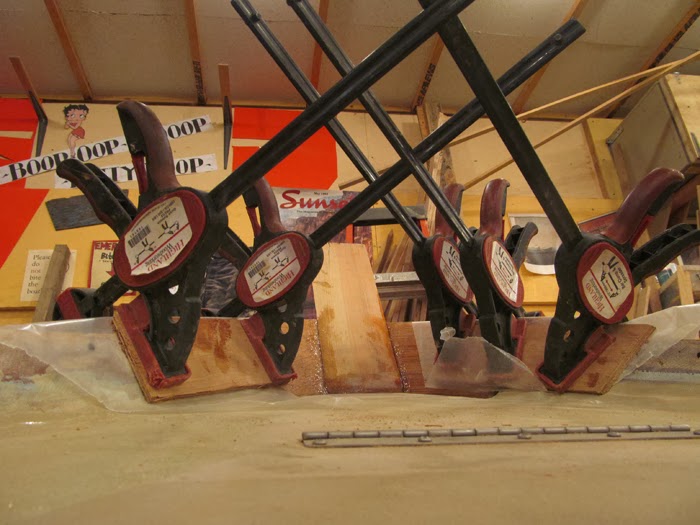 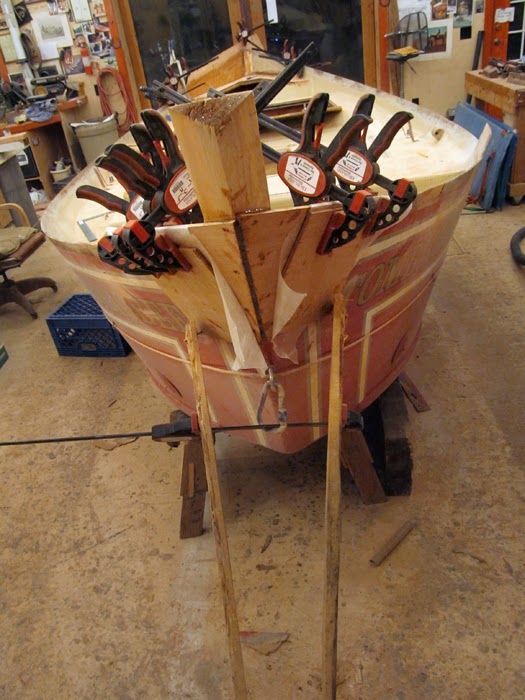 Today Janek and I ground down a bunch of funky spots, cleaned up the scarf patches, and started glassing the parts that were ready. 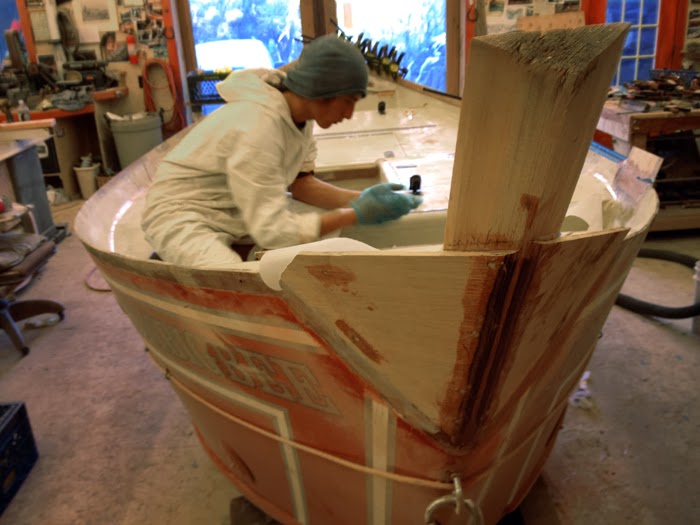 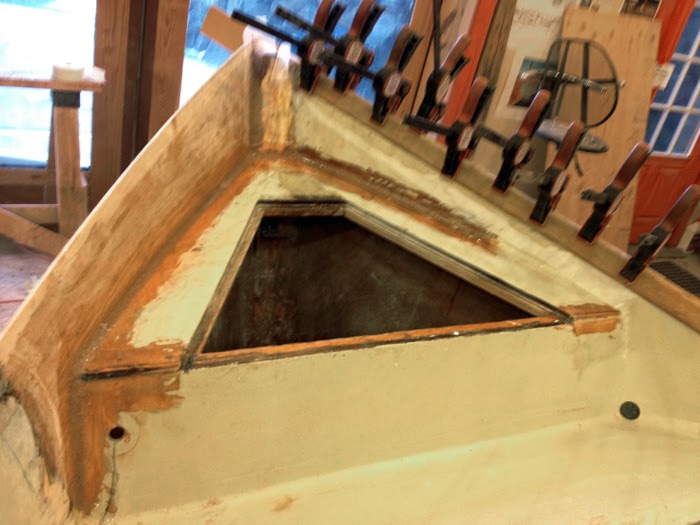 Janek reworking a few troubled joints in the deck work. 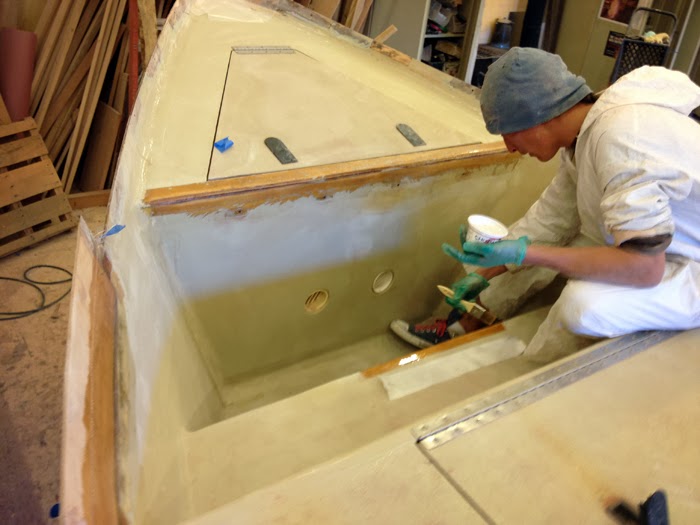 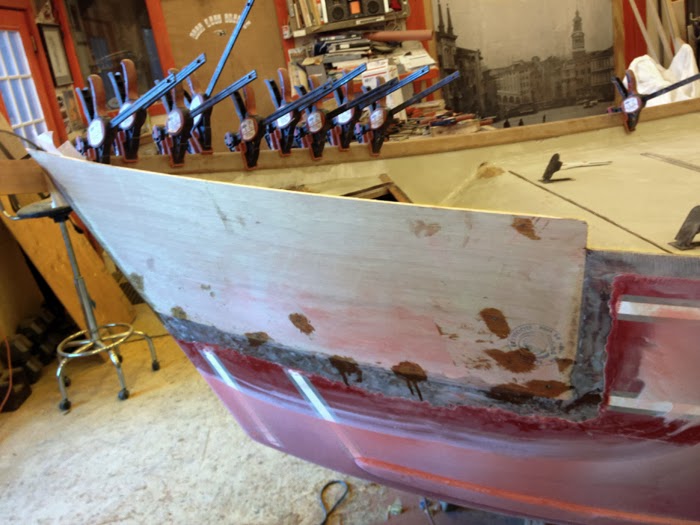 The Dragon seal of approval: Lloyd’s of London 1088 quality. 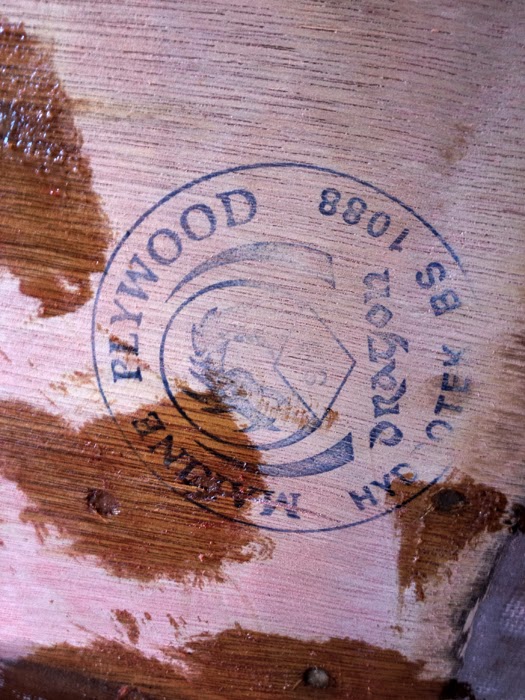 Boat wrecks remind me of head wounds. They always look so messy and scary and unfixable. But clean off the blood, snip off the damaged tissue and it looks pretty doable, pretty quick.

We’ll be crafting her some pretty new gunwales in the next few days which always perks up the look of a boat.