brdfrd2020-11-24T19:00:16+00:00November 8th, 2013|News|
With the main structure of the new eaves up and sheathed, I launched into a few other details that I have long wanted to do. One being to put a ceiling and a couple more hoists in the carport. Just to make it look better and be more functional. None of this is about need.

Roy stopped by and helped get the first few ceiling panels up, but the last four I got to do alone. I had a brainstorm and turned four of my three-foot clamps inside out to hold the panels up while I shot them into place. 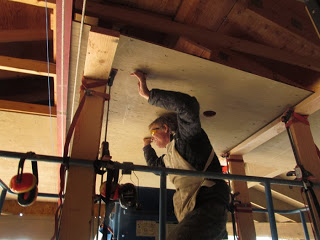 The view from the boat loft. Cataract is all set to go on her next adventure. 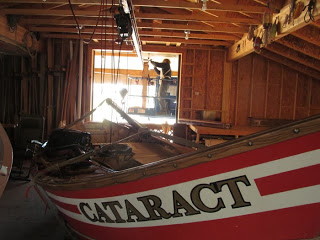 The other thing I wanted to do was cover the dreary particle board gable with something cool, like maybe a wooden mural of Grand Canyon or something. Doesn’t it cry out for something more interesting? 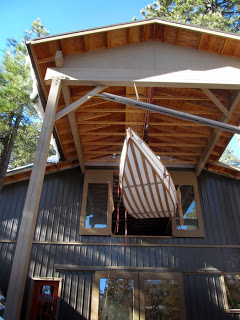 So I laid some no-groove siding plywood—which has a nice rough-sawn texture on the exterior—on the floor late at night and started drawing Grand Canyons. 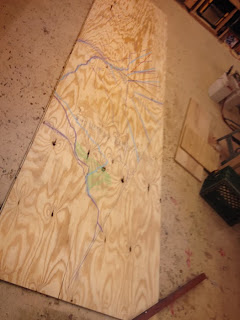 The guys at the paint store were kind enough to sell me some generic semi-transparent stain and decant me some of each of the tints in separate cans, so I could mix up a bunch of different colors. And somehow, I don’t know how, it worked. Here we are the following morning. 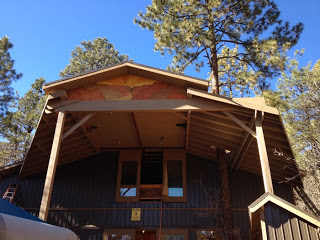 I nailed a couple split-twig figurine bighorn sheep up there for fun. 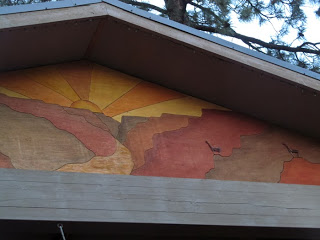 Color me happy. So far the only negative feedback has been from the Acorn Woodpecker whose favorite stash hole got covered up. He is now drilling a new hole. 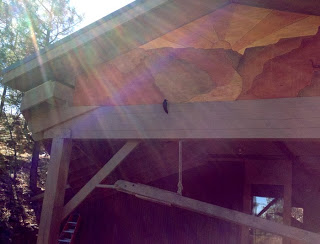