A dozen toy toilets? Couches for the drafting ducks? I’ll let you ponder these latest weird things while we go upstairs and sling Moe down for a few finishing touches. 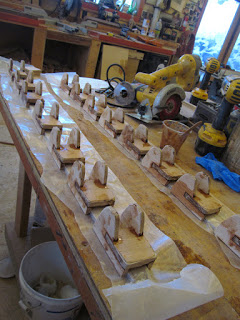 Moe’s oars have arrived and we are doing some oar leathering tomorrow night. I thought it would be handy to have the boat nearby to make sure we put the leathers in the right place. If all goes well we’ll take Moe over to Winslow in a couple days and see if she floats in the reservoir south of town. 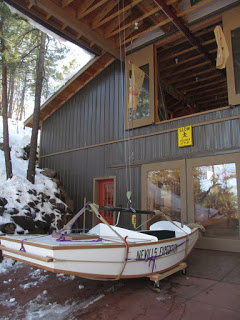 Give up on the weird things? I thought so.

They are custom jam-resistant back-plates for Southco latches. Every now and then something in a hatch will tumble up against Southco latch and you cannot get that sucker open for love nor money. In the case of the Rio Rojo, which will have its hinges buried inaccessibly beneath the lids, it would then become impossible to open the hatch. Better hope it’s not the liquor hatch. The other hazard with these otherwise brilliant latches is that if you stuff your hatches really full and force them shut, the bolt end likes to puncture or tear stuff. So I made these little thingamajiggers whitch protect the latch from getting jammed and at the same time, protect the contents of the hatch from the latch. This is how it looks from the bottom with the latch open. 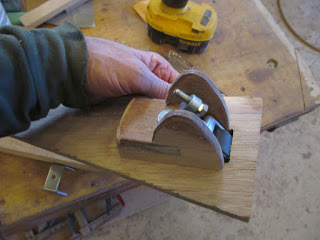 Well, the paint wasn’t quite hard enough to work on so I thought maybe I could try this idea out…
And as soon as that paint dries I will get to work.

Here is how it will look inside once the hatch is latched. I suppose you could still jam it, but it would be a lot harder. 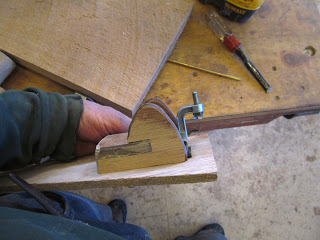 Then Travel Channel came by for what I thought was going to be a ten minute interview about the Glen and Bessie Hyde story that I wrote a book about some years ago. Nope. They we doing a full episode of a new series on the parks, called Monumental Mysteries. I get to star in the show. Should air in May or June, 9 p.m. on some Thursday or another. Anyhow, the set-up and interview took about four hours. A lot of that was trying to make me look respectable. To no avail. Then it was after eight at night and I gave up entirely. 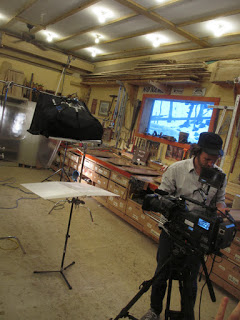 But hey, at least I got the pinstripes and bowpost on today. 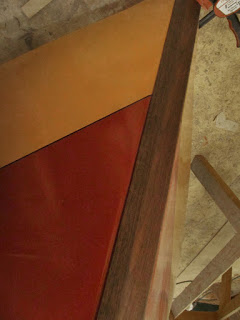 Everything will go very fast and smoothly.

For real this time.