brdfrd2020-11-13T01:10:52+00:00November 5th, 2012|News|
Here is a catch-up blog from earlier this year:
In May I flew east to go to–what else would a boatbuilder do on his holiday?–boatbuilding school. The course at WoodenBoat School of Brooklin, Maine, was called Fundamentals of Boatbuilding, taught by the infamous Greg Rössel, modern-day luddite boat guru of some renown, writer of books, and disk jockey. I had a long break between river trips and couldn’t say no. 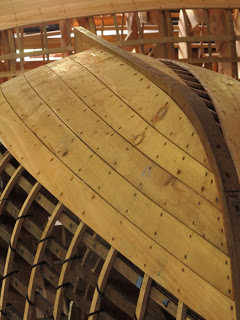 But first I had to stop and visit Lora and our lovechild Ruby the Dory. Ruby needed a house so we loaded her up with lumber and built her a collapsable structure out on the island. 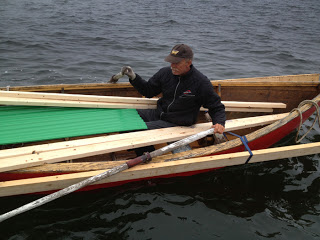 Time was short but we got ‘er done, launched in the dark the next morning, and got in one last sweet sunrise row. (On my return train trip to Arizona I downloaded a mess of iPhone photo apps to play with as you see here.) 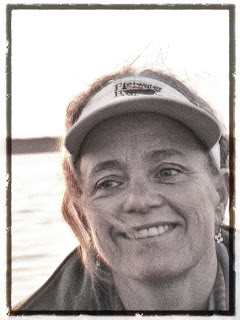 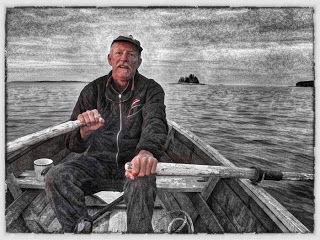 Although no one in Brooklin, Maine has ever heard of Major Powell, first to run Grand Canyon (intentionally, that is) in 1869, the cottage where the Major died is still standing just to the west of the village. 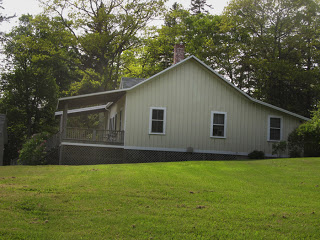 The view from there is likely the last scene Powell ever gazed upon–Eggemoggin Reach, a branch of Penobscot Bay. 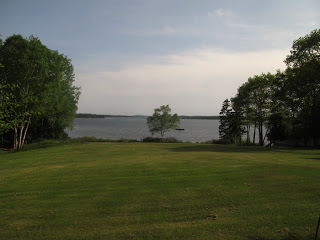 Two miles east, I set up shop on the lawn at WoodenBoat School and gave my desert tent one hell of a workout throughout the next two stormy weeks. Eggemoggin Reach is still in the background.

The WoodenBoat campus is set on an estate built by a zillionaire who lost it all a few years later in the Depression. The boat school proper is in a giant fireproof horse barn. 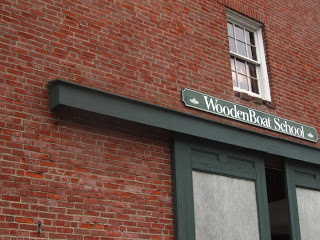 Greg showed up early each morning to prepare for class and begin ten hours of coffee drinking. Priorities. 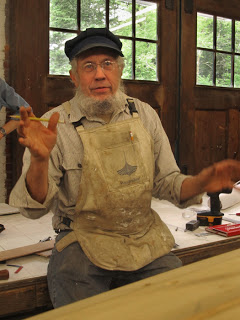 To my delight, one of the boats we got to work on was a Whitehall, the very style that the old Major used in Grand Canyon, and one of the tougher small boats to build. It is high on my personal list of boats to build back at Fretwater. In this shot Greg is using it as a drawing board. 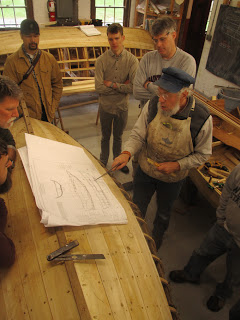 Greg is an excellent teacher with a bottomless wealth of knowledge, a great ability to explain things verbally, on the chalk board, and in practice. His sense of humor is equally bottomless. 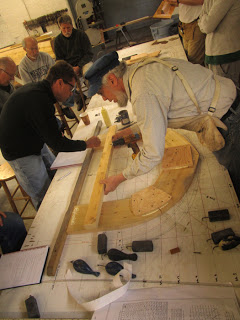 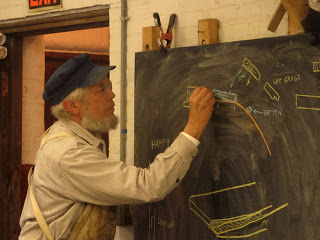 In the afternoons we got to row some of the company cars, weather permitting. Here I am in a Whitehall, gazing down the reach toward Major Powell’s place. Something oddly perfect about that. 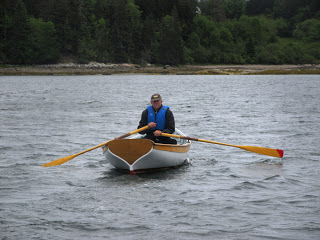 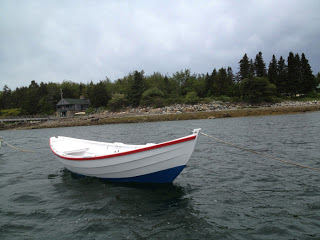 I learned to row her in the Susan Manning style of one pin per oar. Good discipline. 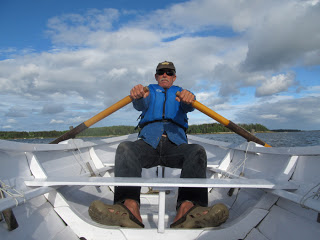 We learned all sorts of stuff not directly associated with boatbuilding–like how to hollow-grind chisels. 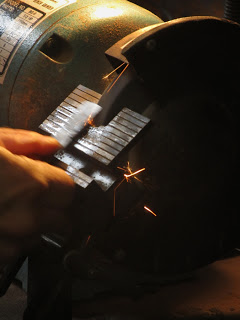 And how to grind up endless northern white cedar boards to make teeny pieces. This teepee stack is about 20 feet tall. 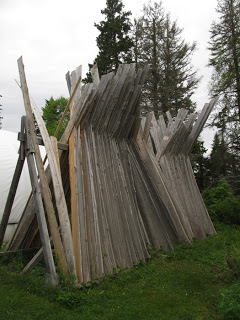 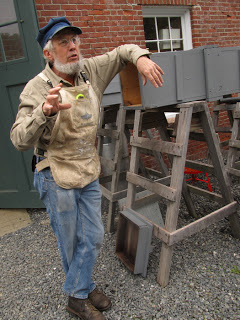 And here is Greg preparing for the afternoon session. 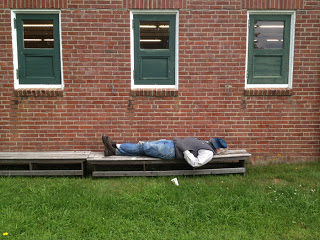 The Whitehall boat had one side plank that troubled Greg. It just wasn’t right. One day we came in and he had pulled it off the boat, leaving a gap. The planks are hard enough to cut accurately when you have to just match one side to within a 32nd of an inch or so for sixteen winding feet. This one would need to be that accurate on both sides–curve, width, bevel, and shape all perfect. It’s called a shutter plank when you fit one like this in, and is among the harder things a boatbuilder will need to do. I volunteered.
Once you are sure the plank is absolutely perfect, it has to be steambent into place with great force. The great force is problematic on a twisting hull like this, and Greg let me invent a giant hanging pressure bar to pry against. It is the big dark plank over the boat in the next picture, braced against the floor and ceiling and clamped to the keel strip to hold it steady. 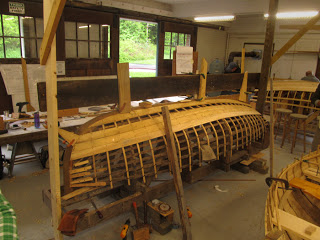 Fellow student Doug was my partner on this. Here he is test-demonstrating how the pry-bar will work when the steaming hot plank shows up. Dirk from Germany is in the background, bemused by this creation. 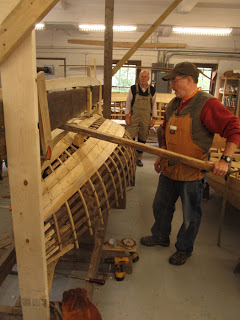 But by god it worked. 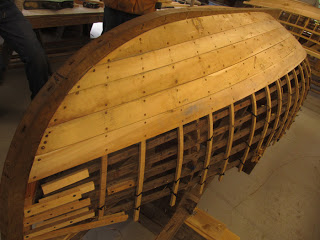 Lookit! It is in there, tight as a tick. 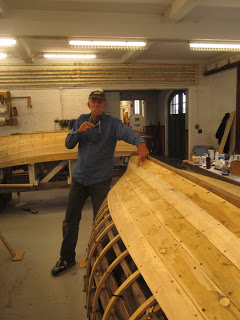 As the course drew to a close on the final Friday, we finished the Chaisson dory and dragged it outside for a class shot (two guys left early but I PhotoShopped them into the picture.) Finished boats are sold to the first student who can cough up the price of materials. Charlie got this one after a month or so deliberating. 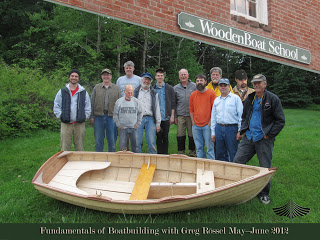