And the beat goes on

brdfrd2020-11-12T17:29:31+00:00January 15th, 2012|News|
Off go the dories with their new bomber bottoms. We’ll see if minor insults such as they received in the past few years cause any new visible results. Based on our product testing, wethinks not. 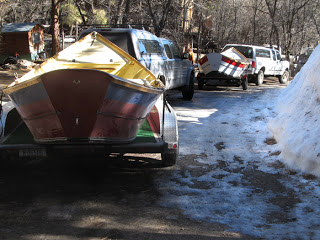 Next up–or next down actually–is the Julius, the lapstrake replica of Buzz Holmstrom’s 1937 wonder boat in which he became the first to solo the Green and Colorado Rivers. By subtracting a foot in length from the classic Galloway design and adding that much in width, Holmstrom created the best boat of its time. But Buzz’s original boat disappeared in the fog of time, last seen in the 1950s in his home town of Coquille, Oregon. Newspaper ads with photos of its last known appearance brought us no results in tracking it down.

So Roger Fletcher of Rivers Touch and I recreated it from the many photographs in existence. With a lot of help from a lot of friends, we built Julius in 2001. I put about three thousand miles on her in the next three years, running the Green, Colorado, Rogue, Salmon, Yellowstone and Grand Ronde–all the rivers Holmstrom rowed in his brief, brilliant whitewater career. Julius handles as nicely as Edith did crankily–due to Holmstrom’s uncanny homespun designing and boatbuilding skills.

But dry desert air, alternated with prolonged immersion in rivers, repeatedly shrank and swole the bottom, loosening the screws and cracking the planks to the point where no amount of soaking would tighten her back up. And a confession: there were, before I built adequate shelter, a few seasons of irresponsible storage that put undue strain on the decking. So for the last few years, Julius has waited patiently in the loft for a reboot.

2012 is the 75th anniversary of Buzz’s big run, and I plan on taking her down Grand Canyon on a celebratory AzRA trip in April. So down Julius came around noon today and Jim and I lit into the bottom. Off with the battens. 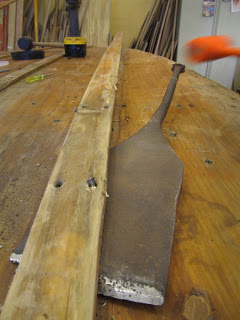 Some of the screws didn’t really appreciate the shrink/swell ride. In the background is one of the bigger cracks that formed over the last decade. 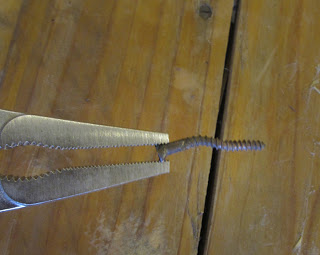 And off with the tortured planking. 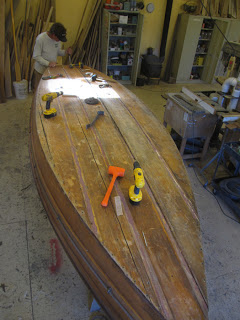 Stunned we were–stunned–by the sheer tenacity of the SikaFlex caulking we had applied between the bottom planks back in aught-one. Man, that stuff is killer strong. But we, too, are persistent. 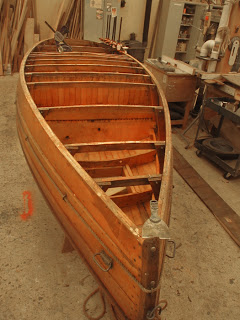 Things look very good inside other than one cracked floor rib. We fix. And one split inner chine log. We fix. 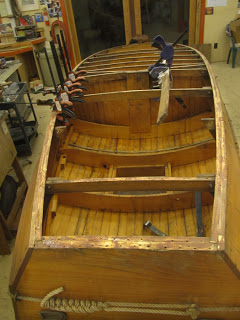 The floor planking, for the most part, is in good shape. Here we are repairing a long split, figuring an epoxied split is no weaker than a new board, and new fifteen-foot Port Orford cedar planks are hard to come by in Flagstaff. 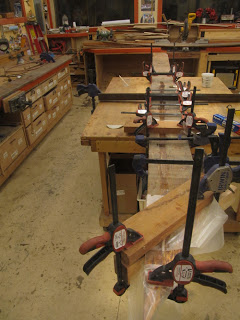 Back when Julius was new I used a hot copper tip on a propane torch to burn the name into the sheer strake. Turns out I only burned the oil/varnish on the surface, which all wore off. I’ll torch him better this time around. 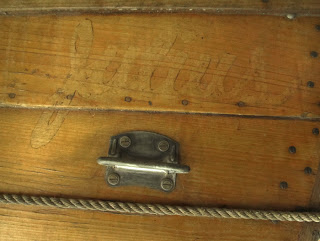 I am thinking a lot of the stress of the swelling boards was accentuated by the fact that the planks were quite wide and not quarter sawn. Flat-sawn planks such as these swell a lot more. (And cost a lot less–unwise savings, that.) So we are going to rip the planks in half lengthwise and hope that several narrow boards will self-destruct less catastrophically than a few very wide ones did. We’ll add a couple pieces of new wood where a couple old planks rent themselves asunder. In ’01 we simply butt-jointed the planks. This time we will cut the proper bevels in the joints and chink them with cotton before caulking. That worked wonderfully on the Edith. And we’ll hope for the best. Hey, I got a lot of miles out of the original floor, so this may last the rest of Julius’s career.