brdfrd2020-11-12T16:37:10+00:00December 28th, 2011|News|
While Betty Boop‘s paint gets ever harder and drier I am making a mess of wee parts that go on her decks and hatches. First is the full-width front splashguard–the piece on the original boat that pooled rainwater and debris from the high front deck, causing the majority of the deck and gunwale rot. This is not going to happen again. I am sealing the bejeezus out of the deck and splashguard. But more importantly, the owners of the newly rejuvenated Boop will be contractually bound to keep her indoors in the winters. Dammit. Or I will repossess her and kick the perpetrator in the shins.

And some cute little setback rests for the passengers. These, Gary Ladd tells me, were an addition of Larry, the second owner. But I think they’ll be nice. 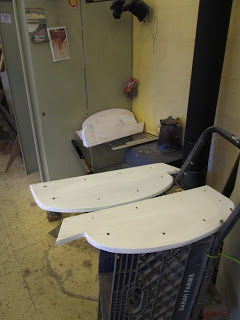 With some leftover white oak from the Edith project this spring I am making a passenger handle for the front seat, and a couple smaller ones for the rear deck. Gary, who boated with the boat as both Betty Boop and Great Thumb, said it was always awkward to get aboard the boat as she departed, and something to hold on to would be really convenient. Plus it will be a good place to secure the stern line. And if you want to ride on the back deck (yeeeehaw!) these will be most handy. And a couple of boatman seat guards to keep the throw cushion and boatman butt in place. 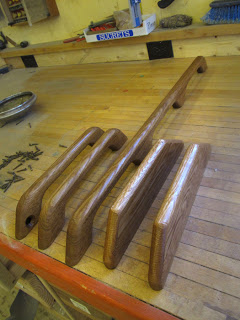 These next things are raised oarlock stands, which came with Larry’s tenure as owner. He raised both the seat and the oarlocks to a height that seems to make good sense, so with fingers crossed, I have replicated both. A weathered original blue one is in the foreground. 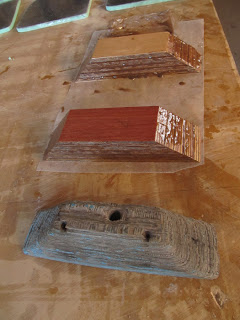 Another dividend from the Edith project is a pair of brass 5/8″ oarlock inserts that I was shipped (and charged $42 for!) by mistake. I figured I’d use them someday, and not even a year has passed and here they go. Cast silicone brass. Pretty jazzy. 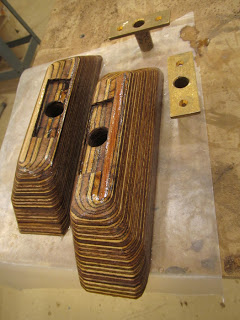 Meanwhile we are already gearing up for the next project–beefing up the bottoms of the first two Fretwater dories, on which I errantly skimped a little too much on fiberglass. They have been punctured a few times in what should have been insignificant insults. So here are eight floor layups that match our original floor. Tomorrow we’ll lay up different series of materials–biaxial glass, core mat, xynole, and regular glass, all with our new favorite resilient resin.

The next day we get to smash ’em! May the best floor win. 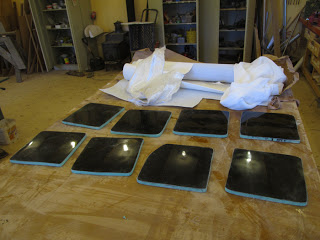