brdfrd2020-11-12T01:28:31+00:00November 29th, 2011|News|
Well, a shipment of stainless steel came in this morning, so I replaced a mess of rusted out 1/8″ gunwale bolts with new 1/4″ stainless steel carriage bolts this afternoon, then fastened in the boards I made yesterday.
Next I started figuring out the supports for the front deck. The boat originally had some astonishingly lame brackets hanging off the front walls about halfway between the front bulkhead and the bow post. These apparently served to help hold up the front hatch frame. They were made of wee 3/4 x 3/4 inch sticks, beveled to nothing at the top where they were screwed to two flanges which stuck out into space to hold the deck frames. I doubt they did anything at all, but it seemed like a good place for some support. Here’s how they looked: 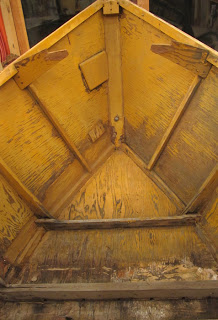 Here’s how they interacted with the original framing. They were barely attached to anything on either end. I think it was the decking that held it all in place. 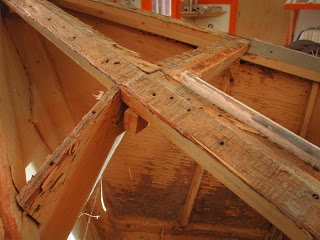 I decided to go industrial and put in a forward rib, which was relatively straightforward. Then I wanted to make a single three-planed arched brace instead to the two cantilevered arms, but in order to do that I had to figure out the magical points in space where said new arched brace would go. That’s where the string came in.

In the next picture, the string is stretched taught between the bow post and the bulkhead corners. The level is clamped into place even with the tops of my new ribs. Using squares and pencils and rulers, I defined the shape of the new arched brace, then marked it out on a scrap of 1/2″ marine plywood left over from the last boat. I measured two or three times. Yup. the rise was exactly 2-3/16″ from the base of the level to the string. 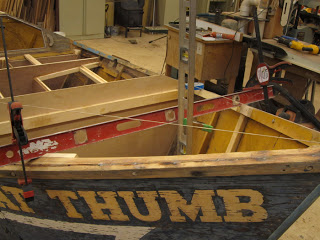 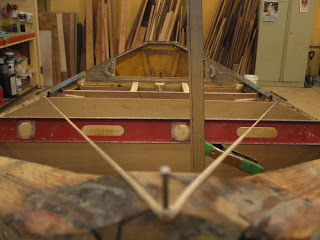 So I cut it and tried it for fit. Yup. Exactly–precisely–one inch short. Hard to believe I measured it three times and read “three inches” as “two” each time. Other than that it was perfect. So I made another, precisely one inch taller. 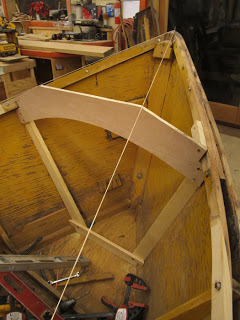 And it was perfect. So I screwed it in and quit for the night. Four sticks by 8:30 p.m.–a mere twelve short of my goal. C’est la boatbuilding.