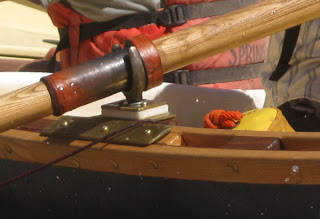 A lot of folks have asked me about the leather oar wraps I have been running for about a decade. I love them—they outlast P-Tex plastic and, if you wax them before each trip, they are the smoothest wraps going. Them northern guys like rope wraps, but, well, I hate rope wraps. Too sticky-jerky-clunky. I like them really smooth and greasy, effortless to feather even under stress. After a bit of use they take on the metallic bronze sheen of the locks.

The old traditonal method was to tack on the leather with copper tacks, which was pretty easy and self-explanitory. That worked fine on lakes and oceans, where you take consistent, measured strokes. But in whitewater, where you get sudden, violent stresses, oars tend to snap right where you put the darned tacks. Bruce Bergstrom at Smoker Oar explained to me how the tack lets in just the teeniest bit of moisture but it’s enough to significantly weaken the oar. And he refused to sell me oars unless I promised not to drive tacks into them. I promised, but then had to come up with a better way. I did, and ten years later all my original wraps are still good as new, and not one broken oar.

1) Go to the leather store and gitcherself some thick saddle leather. Three-sixteenths to quarter-inch thick is excellent if you can find it. Get some one-inch belting of the same leather for the stops. Buy a good curved sewing needle and some sinew for sewing (or waxed linen) (sinew is more fun to say). Also get a good leather punch. The guy at my leather store, when I told him how many holes I was going to punch, refused to sell me the cheap punch. He made me get the $30 one. That was ten years ago. It rocks.

2) Measure out your wraps (including stops, which will glue on top of your wraps) on your oars, and mark the oars top and bottom. Measure circumference of oars. Cut a leather a bit larger than the diameter to be safe, then trim down to where you have about a quarter-inch gap. (This gap came out a little too big, but it still worked.) Cut the edge closest to the oar blade at a bevel, so it will slide into the oarlock smoothly. 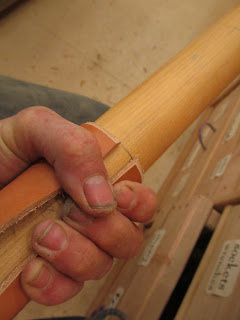 3) If you want to tool the leather, do it now. Wet the leather lightly first. 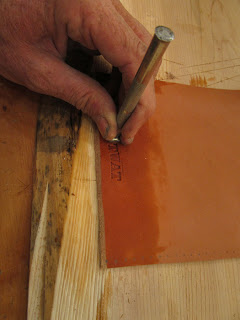 3) Punch holes every quarter inch up both edges, about a quarter-inch in from the edges. 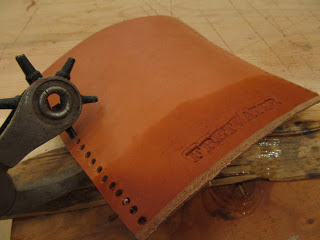 4) Put two coats of contact cement on the leather and allow to dry. 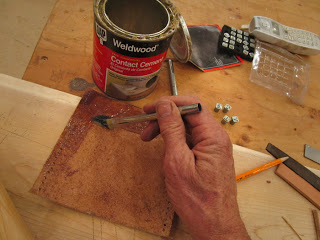 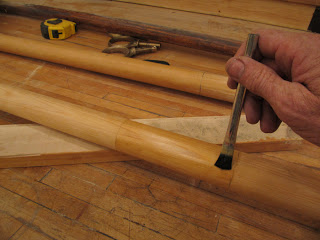 6) Once the glue is dry, soak the leather for a few minutes, until it is soft and wobbly. 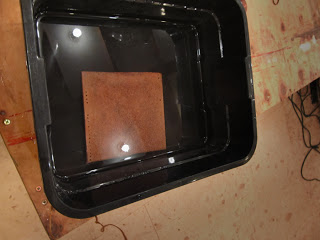 7) Now take about five feet of sinew in your curved needle, tie it on to the blade-end of your wrap, get the oar wet, then start stitching with a baseball stitch. (Come up from the bottom of one side, then the other). Be sure you are even with the marks on your oars, because you can’t re-do this. IT’s gonna STICK.  Pull tight often. Keep the oar and leather wet, so the glue doesn’t stick too tightly just yet. It’ll stick like all bejeezus once it dries. You should have no trouble stretching the leather around the oar. 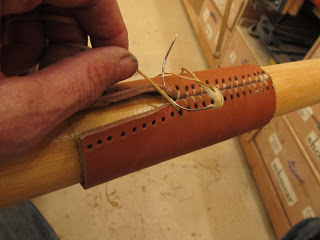 8) Tie it off good beneath where your oar stop will go (more on the stop tomorrow). Pound the stitching flat while it is still nice and wet. 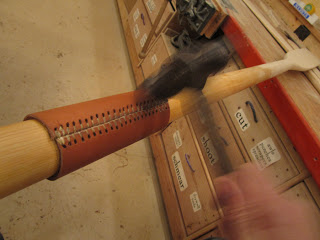 Now stand that oar up by the wood stove and do the next three oars. Or have a beer. Or both. Congratulations, You’re about half done. Tune in tomorrow for Leathering 102: Oar Stops and Waxing.

Notice I ran out of tan sinew and used black sinew on the second two. This is also a good angle to see the bevel on the bottom of the wraps. 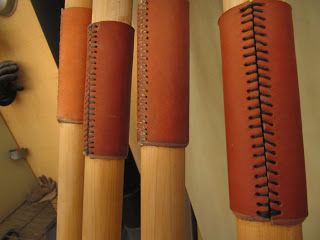