Okay, now it’s time to put the stops on. Take some of your one-inch belting (or cut some from your stock). They need to be long enough to go twice around the wrap plus about an inch. Next, taper the last inch of the fuzzy side of each end of the strip down to about nothing, so that as you wrap it around the oar, the second layer doesn’t hit a bump where the first layer started, and the overlap ends where the beginning taper ends. Hope that makes sense.

Now tool the leather if you like. Then use masking tape to cover the outer end of the wrap so you don’t get epoxy all over your pretty tooled leather. Here are a couple that are ready to go. 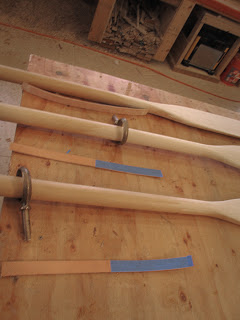 Cut some strips of plastic or visqueen or some sort of stretchable plastic just wide enough to cover your stops and about long enough to go one and a half times around the stop. Put a piece of tape on the end to hold it secure once it is on. 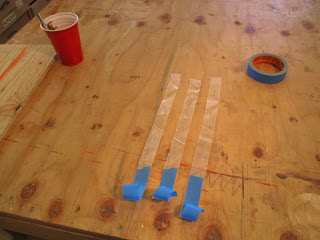 Mask your oars above the stop, and your wraps below the stop, leaving about a quarter inch extra exposed so you can wipe the epoxy into a rounded bevel and not leave any tape under the epoxy. 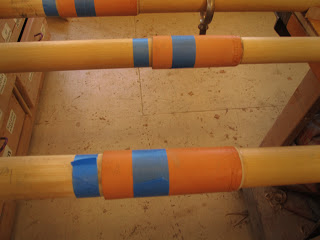 Now mix up a bit of epoxy with thickener—I use Resin Research 2040 with silica and a touch of wood dough for color—about the consistency of mayonnaise. The leather will soak up some of the liquid and make a thicker paste as you apply it. Epoxy the entire inside of the stop and the outside of the wrap. 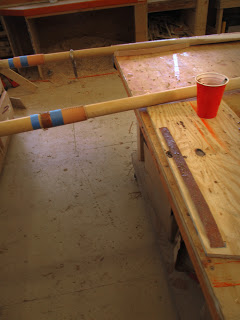 Now comes the awkward part. Wrap the stop onto the oar, pulling it as tight as you can. Grab one of your visqueen strips and wrap that around the stop, pulling it tight. Once it is pretty tight, grab your roll of masking tape and take a few more tight turns around the stop to make sure it does not come loose.

Now make sure the stop is just where you want it and the second wrap is nicely in line with the first. Using a gloved fingertip, wipe it clean on both edges, leaving a bit of a curve at the junction.

Whew. Intense, eh? Good job. I bet it will take a once through to make sense of this gibberish, but it all makes sense as you do it.

Once the epoxy kicks, take off all the visqueen and masking and trim any sharp edges off with a utility knife. Doesn’t that look sweet? 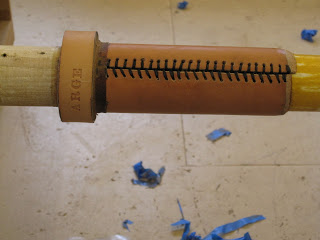 Now heat up a can of paraffin with a torch until it is smoking hot. This one is plenty hot: 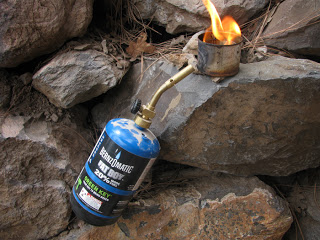 Sacrifice a cheap chip brush and paint the first few inches of the wrap (the area where your oarlock will spend nearly all of its time) with a few coats of paraffin until it quits soaking in. As the can of paraffin cools a bit, you can put on one last coat that doesn’t really soak in at all but leaves a waxy layer on the wrap. 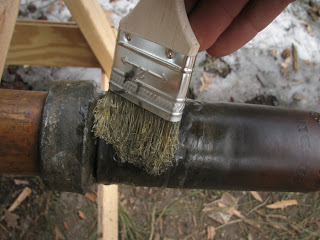 There’s a bit of discretionary latitude on how to treat the rest of the leather and the oar. The treatment I use for oars is a three-part mix of linseed oil, turpentine, and spar varnish. Slobber it on, let it soak in, wipe it off, rub it dry. I use this same system with the remainder of the wrap and the outside tooled surface of the stop. The great thing about this is that you never have to sand down your oars and, if you do it every month or two during the working season, it looks great. Take the same opportunity to re-paraffin the working end of the wraps. Here are some shots of oiling the waxed wraps: 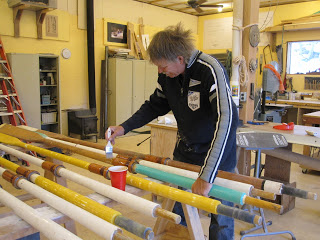 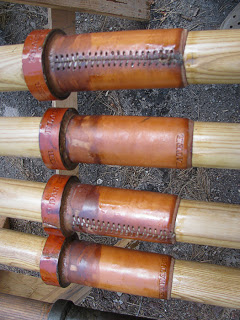 They look a little raw here, but they soon get a magnificent patina. Here’s a Kate Thompson shot of the Julius about 2000 miles into the summer of 2002. Note the bronze glow on the wraps: 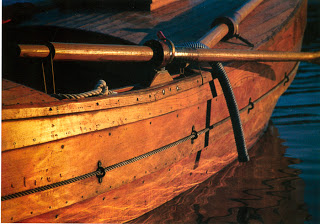 Note: be sure to use a good waterproof canning paraffin. A friend used paste wax, which is water-soluble, and ended up with soft, sticky wraps every time they got wet. Yuck.

An update: Although I still treat the leathers with molten paraffin initially, for routine maintenance I use the age-old traditional beef tallow, now available in a handy stick form from Swanson Boat Company. They also have leathering kits and set-ups for initial treatment with beeswax and tallow instead of paraffin.