brdfrd2020-11-11T18:08:31+00:00March 5th, 2011|News|
I fiddled around this morning finishing off the splashboards and doing a few last details to the hull. But by early afternoon I could not procrastinate any longer. I got the canvas out and began figuring out just how to stretch it across the decks.
Way back in high school art class we learned how to stretch canvas on a wooden frame to paint. Same thing, really: start with the center in both directions and keep halving it. Pulling it as tight as you can, tacking it with adorable little copper tacks. Corners last, pulling out diagonally. The canvas is amazing stuff: #4 natural cotton duck. It makes Carharrt pants look like tissue paper. I think it may be bullet-proof. 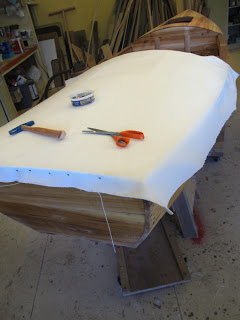 The hatch opening sounds like a timpani when I drum on it. Tight! 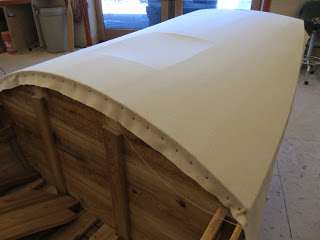 Huh. That was pretty easy. Now the primer goes on. Wow. It’s really white. I mean, like, white. 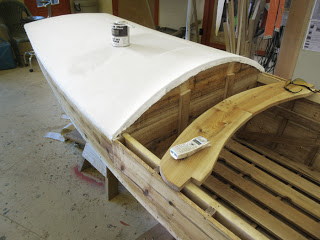 And that canvas was really thirsty. It took a quart and a half of primer to cover it.

Edith has been looking radically different every day. Like a teenage girl who changes her appearance with each mood swing.

I’ll let that dry until tomorrow, then paint the final coat on the decks. Once that dries, I’ll fasten the coamings on, cut out the hatch canvas and tack it to the inside of the rims. But just to see what it looks like, I have to set the coaming and spraydecks in place. 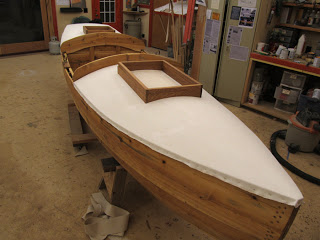 Yeah, that’s mighty white. What a crazy looking boat. Tonight she reminds me of some classic racing schooner from New England, back in the twenties.