I got some energy so ran a set of ribs tonight while I and installed those I bent this afternoon. It is kind of stressful work, trying to get that extreme a bend into those poor, poor sticks in the few moments when they are pliable, catching the impending fractures before they blow, squeezing the clamps with my aching arthritic hands, all the while trying to get all eight of them done before the last of them get overcooked and come to pieces. It takes about 45 minutes to run a batch of eight solo, once they are cooked. Although the ribs, once in place in the boat, do not look all that deformed, it is a pretty radical bend. 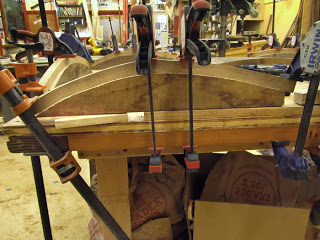 But while one batch is cooking (45 minutes to get up to steam, then another hour-and-a-half of cook time), I am trying to get the previous eight bent sticks out of their clamps and into the boat without busting something else. That involves drawing in the plumb lines, pre-drilling the hull, then clamping each rib in, counter-drilling, and screwing. And once they are all installed, I have to re-shape the bending forms for the varying contours of the hull so that I can bend the new ribs properly when they come out. Tick, tick, tick. 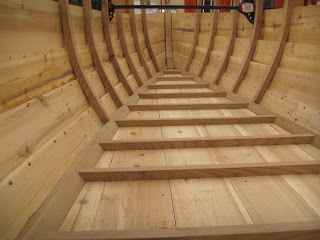 But hey. I’m not complaining. Just describing life at the boatworks. Three more shifts tomorrow, then it’s on to something else. The gunwales, I reckon. And with each step, she looks ever sexier. 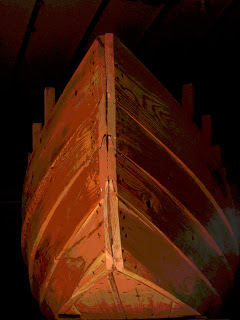 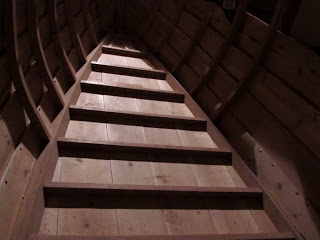