After taking Monday off to do neglected tasks and ponder the next move for Edith, I spent part of the evening leveling her to match the profile of the plans. She’s now stable and ready. This morning we tried steaming a rib and clamping it directly into the boat. 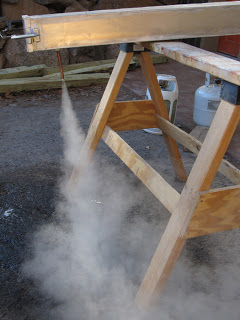 The hope was that the ribs would come out of the sauna pliable enough to simply clamp into the hull and screw fast, saving a few steps. No go. That old phase strong as an oak is based on something after all.

So we dropped back to plan B, cutting some forms out of scrap two-by-fours and clamping the ribs to those. They don’t give in easily. My favorite 300-lb squeeze clamps wouldn’t quite do it, so we ended up with two 600-pounder clamps per rib, crushing them into shape. That’s over half a ton. And a few other clamps mid-rib where they want to start splitting. They finally succumbed. 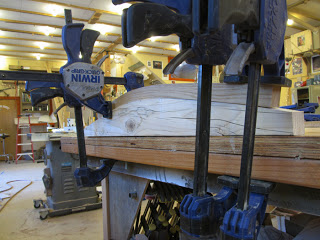 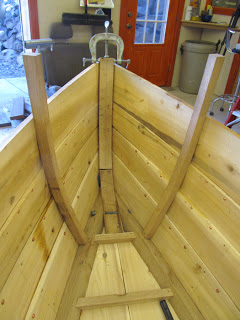 Once they’ve been in the steamer for an hour and a half, then the torture rack for a couple more hours, they seem pretty amenable to being clamped into the boat and screwed fast. A squeeze clamp on the gunwale, two deep-throat vise-grips mid-rib, and the trusty old lobster claw near the base. 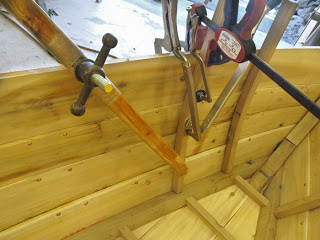 So now we’re in mass production, eight at a time. Three in the boat, eight in the forms, and 29 to go. That’s a rack of ribs. Thank god Dan and I both have clamp fetishes. 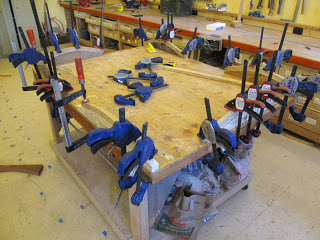