Listen to the wood. Maybe.

The snow kept coming on through the night, although lighter and snow-blow-able. The heavy glop of the storm’s onset, however, weighted down a lot of my trees to horizontality. 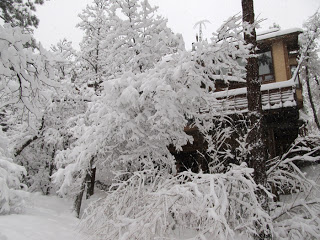 Back in the shop it was time to sand Edith’s innards and begin placing the inner gunwale (also called an inwale, pronounced innel). I  steam-bent and glued up the inwales earlier, and sanded and oiled them last night, so they were ready to trim and install. It takes a pretty good rack of clamps to hold one tightly in place to screw it on. But the process looks pretty cool. Here is the second one going on this evening. 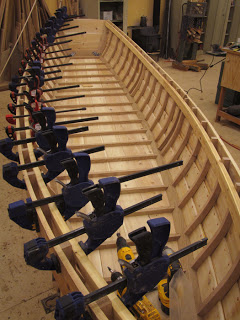 Ten years ago when we built the Julius, a replica of Buzz Holmstrom’s beautiful, home-built 1937 expedition boat, Roger Fletcher and I ran into some serious design issues. As it turned out we had been trying to reconcile two set of photographs of the original boat, and the second set, I finally realized, had been taken after a subsequent owner had sawed two feet off the stern. Little wonder that our hull refused to come together. In the end, we quit trying so hard to force our ill-guided will upon Julius and let the wood bend the way it wanted to. And the wood defined the boat perfectly. We coined the phrase, “Listen to the wood.” And Julius came out pretty nice: 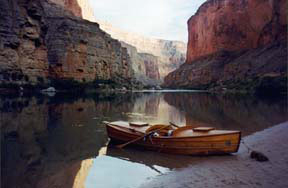 Well, Edith has been telling me she would rather be about an inch wider than her namesake in the mid- and rear-sections. I keep clamping her into what the plans want and Edith keeps disagreeing with me. It isn’t that I would not love to have an extra inch of buoyancy and leverage, and it isn’t that she looks bad—she looks great. It’s just that I am trying to make a fairly precise replica of what the Kolbs were using. I guess Edith and I will come to terms tomorrow when I put in her bulkheads. Here she is the way the plans think she should be: 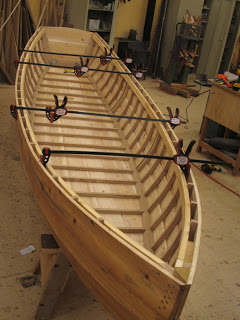 At the moment, I suspect that Edith will win. The goofy way her predecessor’s decks are framed don’t appear to lend themselves to holding a boat in a shape against its will. Maybe we’ll compromise and I’ll just squeeze her in a little bit, so I can say she’s “within an inch.” And fr’chrissake, what’s an inch matter anyhow? I want her to be happy.