Crawling around on the floor, drawing perpendicular bisectors to establish the correct curve for the bulkhead, which defines the deck. Music blasting at a pretty fair, though not quite deafening, pitch. Beer almost empty. Okay, second beer almost empty. Hoping to get both bulkhead curves defined, cut, and in before shutting down. Look up at clock. After midnight. Crap. I thought it was about ten. A good thing this shop is pretty sound-tight or the neighbors would have called the police months ago.

So is this what crazy old men do? Should this be termed eccentric behavior? (It happens often.) Should my keeper be concerned? Oh wait—I don’t have a keeper. Whatever it is, I kinda like it. If you’re going to live alone, you might as well run large.

One last snow-blow for the weekend storm this morning, then back to work. Here’s the view out the front glass door of the shop: 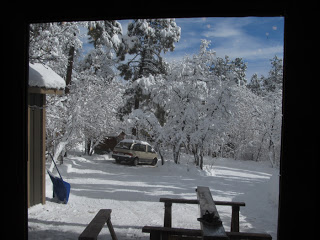 With the inwales in, it’s time to put in the bulkheads. These have to be scribed to both lapstrake sides at once, which is kind of fun. 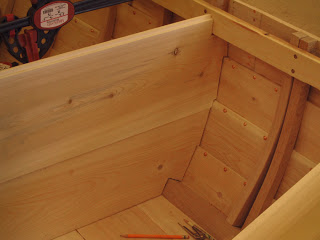 Then the sister ribs go in against the bulkhead, sandwiching them between sturdy oak. I am starting to get used to turning my clamps inside out into spreaders. Damn, that’s a handy feature when you remember to do it. 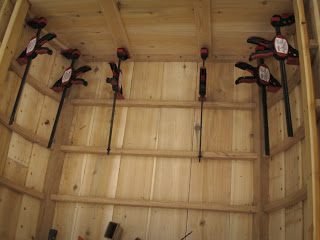 By the way, these particular clamps are fabulous and dirt cheap. If you don’t have some, get a dozen right now. They are on sale at Highland Woodworking for $110 a dozen, and they have been holding up to my abuse for some time. I have eighteen more in the mail to me as I type. For truly heavy squeezing I have to go to the $35 high-end Irwins (the low-end blue-and-yellow Irwins are junk), but these Highland clamps are my favorite for 95% of what I do.

One of the advantages of having the boat right-side-up to work on is it keeps my tools in one place. 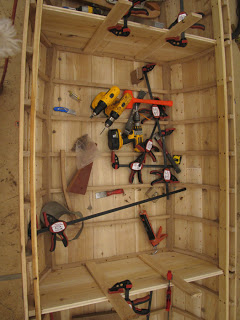 Anyhow, the midnight geometry worked and the curve has me intrigued. The radius increases as you move from bulkhead to transom. This should make for some fun cyphering tomorrow—every deck rafter is a different curve. If the plans are correct, it ends up looking just fine, but my mind is coming up with a pretty bizarre shape. No sense over-thinking it. 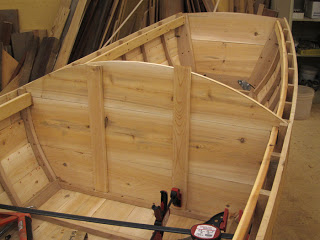 Oh—last night’s quandary about whether to give in to Edith’s desire to be wider has not been entirely resolved, but it looks like I may win on this one. She may still get an extra half-inch of girth in the stern hatch. We’ll see…