A fourth brood of triplet Doryaks

Before Cricket and I headed East, we got the crew started on three more personal Doryaks–the fourth set of triplets to be birthed here. Here’s Bruce learning the fine art of quick and dirty scarfing. 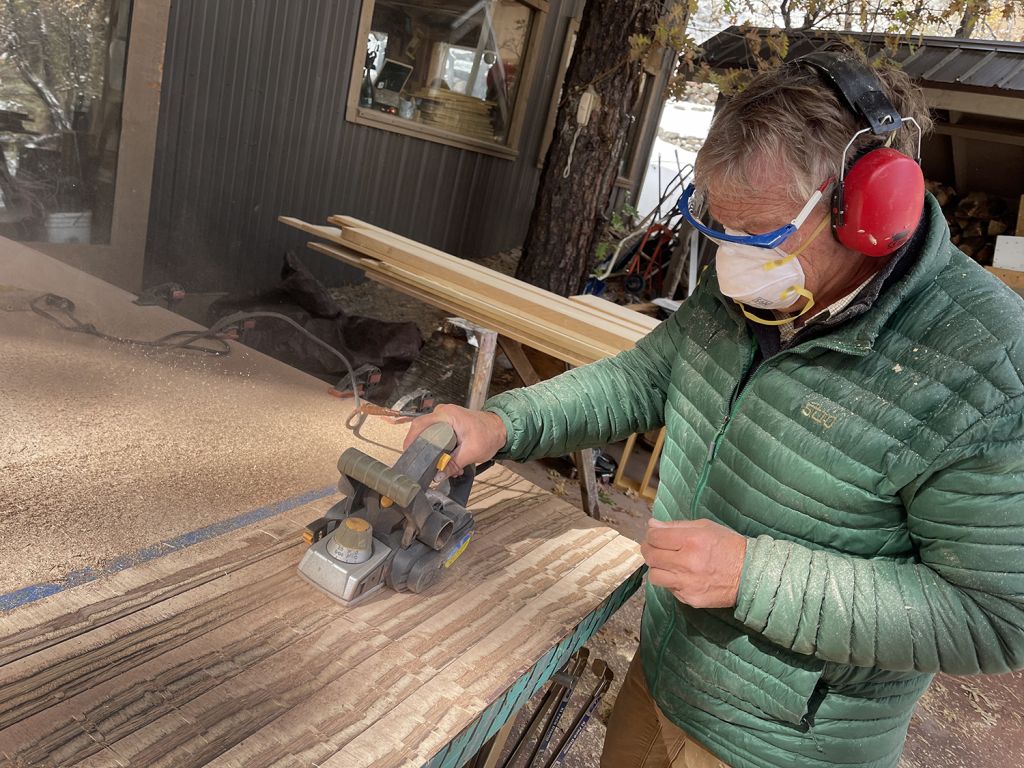 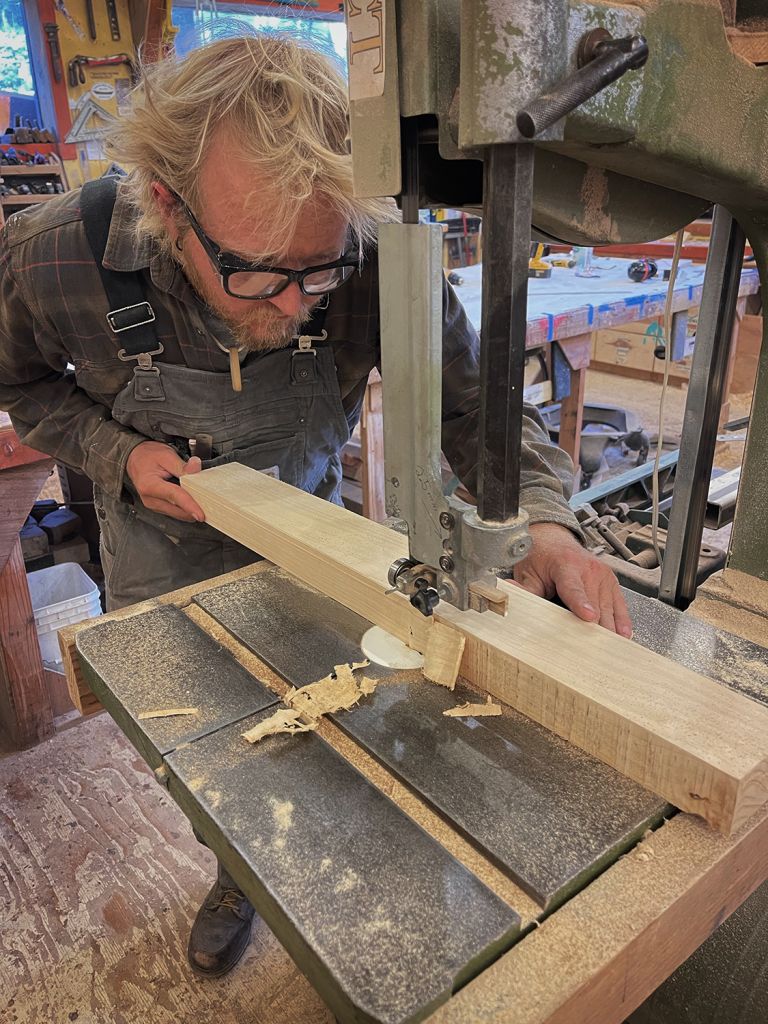 Three sets of side panels getting glued up. Turns out you can get both bulkheads out of the side-panel sheet. Quite efficient. One Doryak will be for Bruce; the others for Arroyo and his sweetheart Deanna. 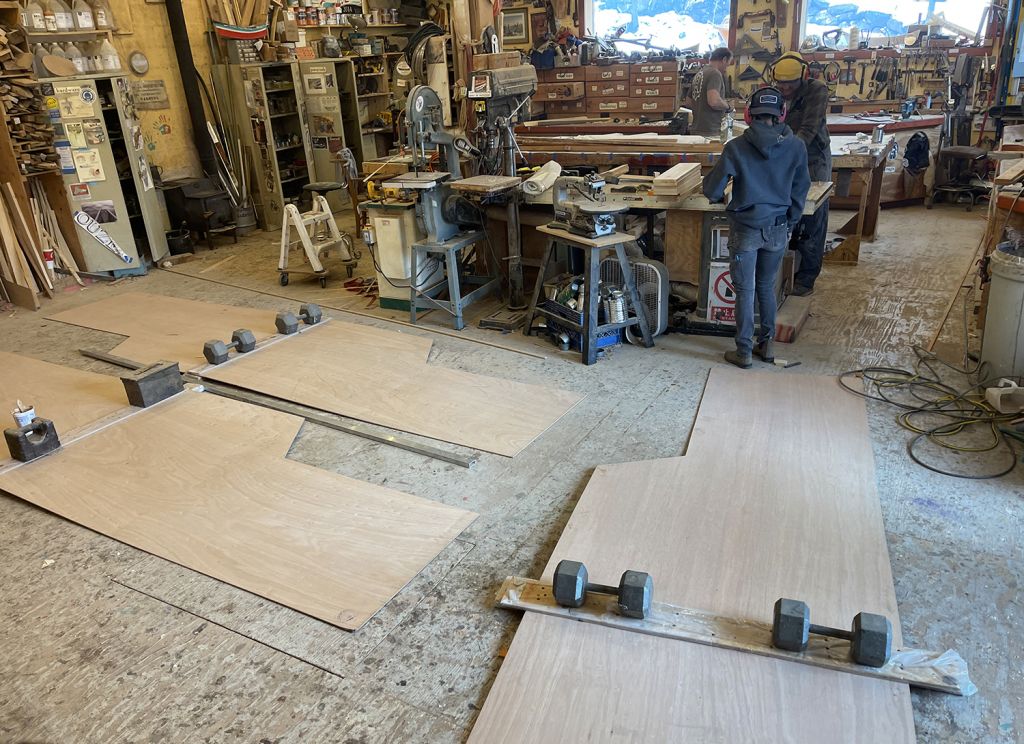 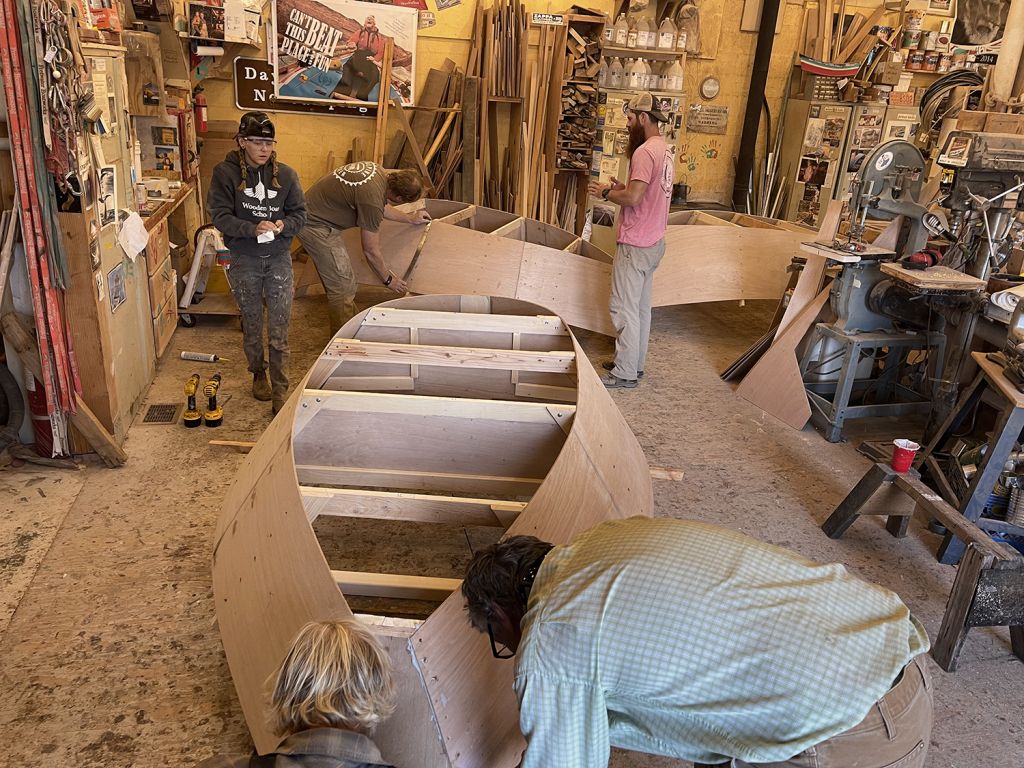 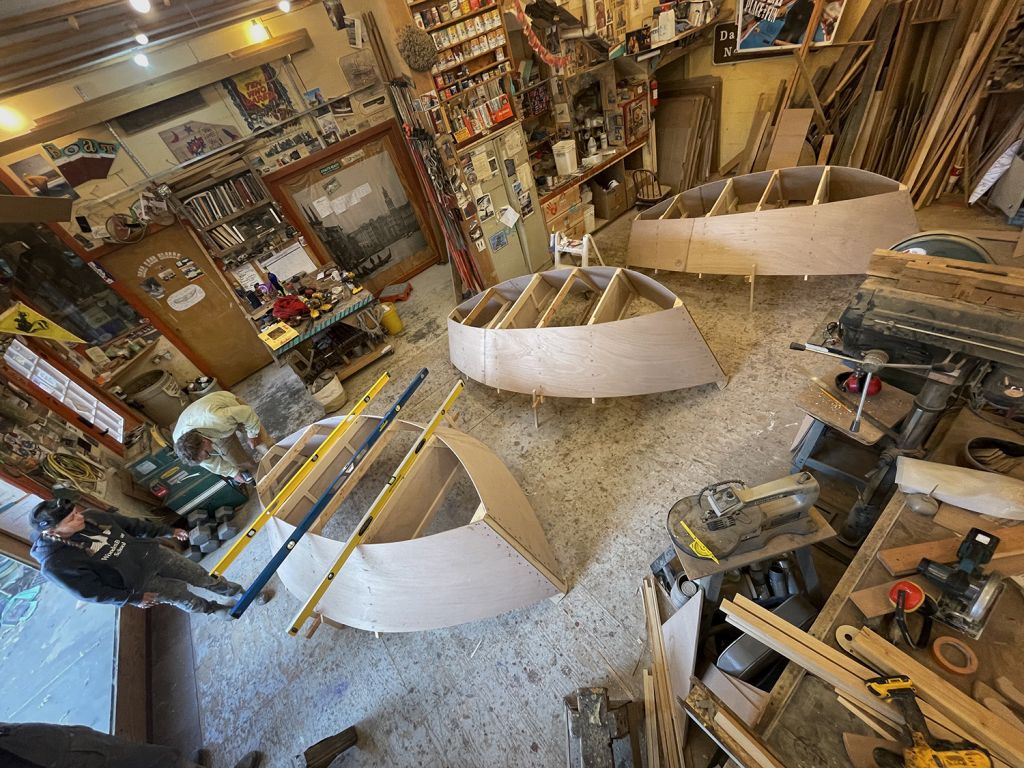 Masking them up to glue on the bottoms. 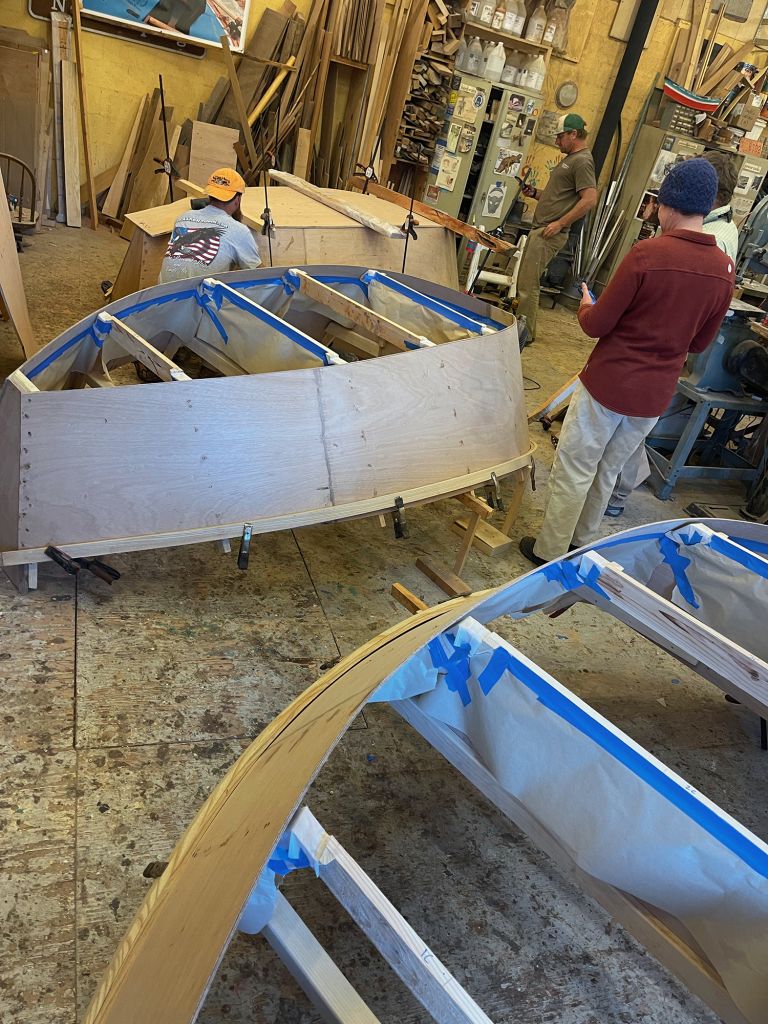 Hidden beneath the boat is Cricket’s chine massaging crew, smoothing out the 50-0unce biaxial inner chines. 60oz once they lay on the 10-ounce cloth overlay. 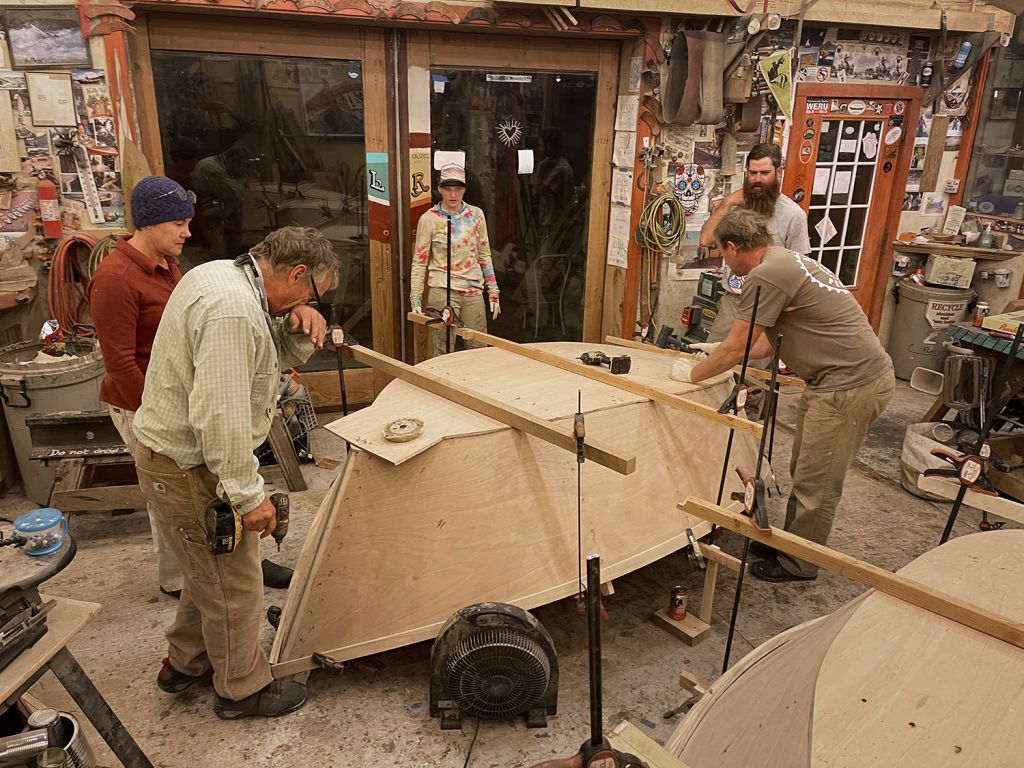 Bottoms on, inner chines kicking. Glade’s foot protruding as he does finishing touches inside. 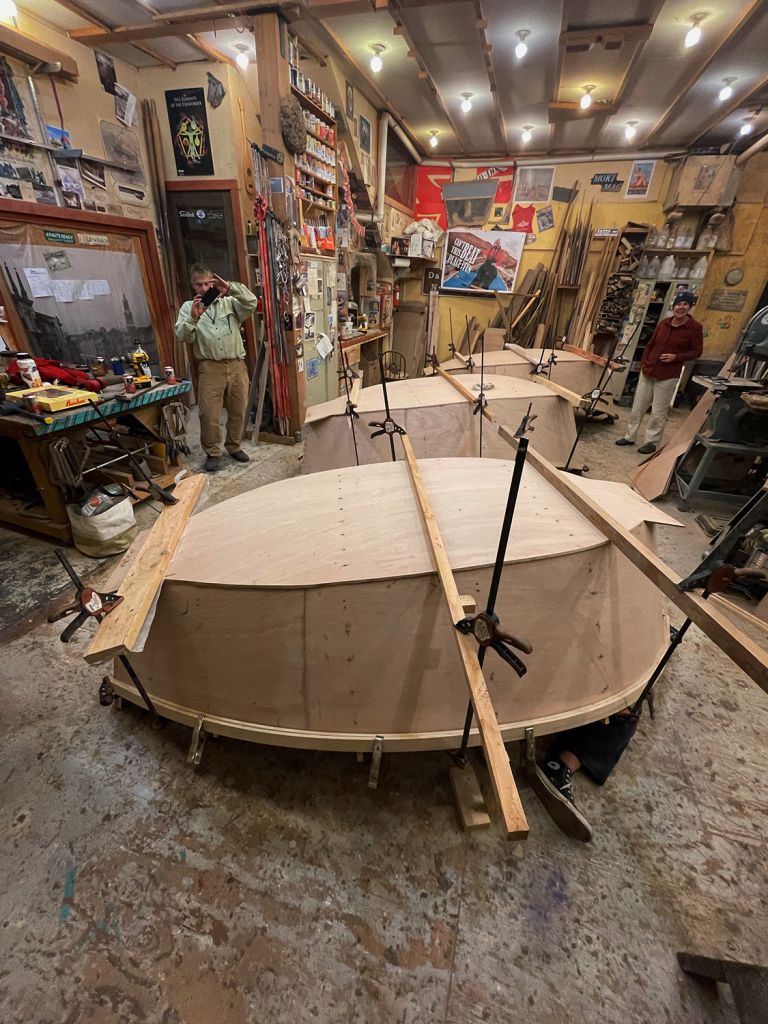 And now to get the epoxy out of Cricket’s hair. Vinegar is a wonderful thing. 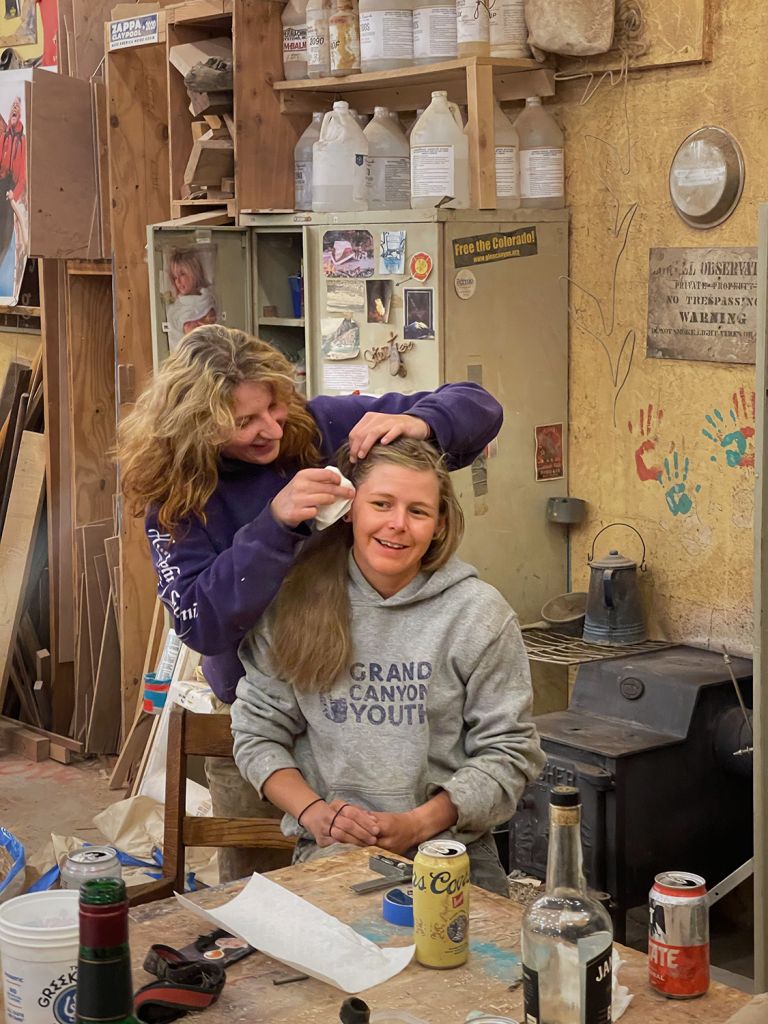 Bottom glass on. 25-ounce biaxial glass with a 10-ounce overlay. 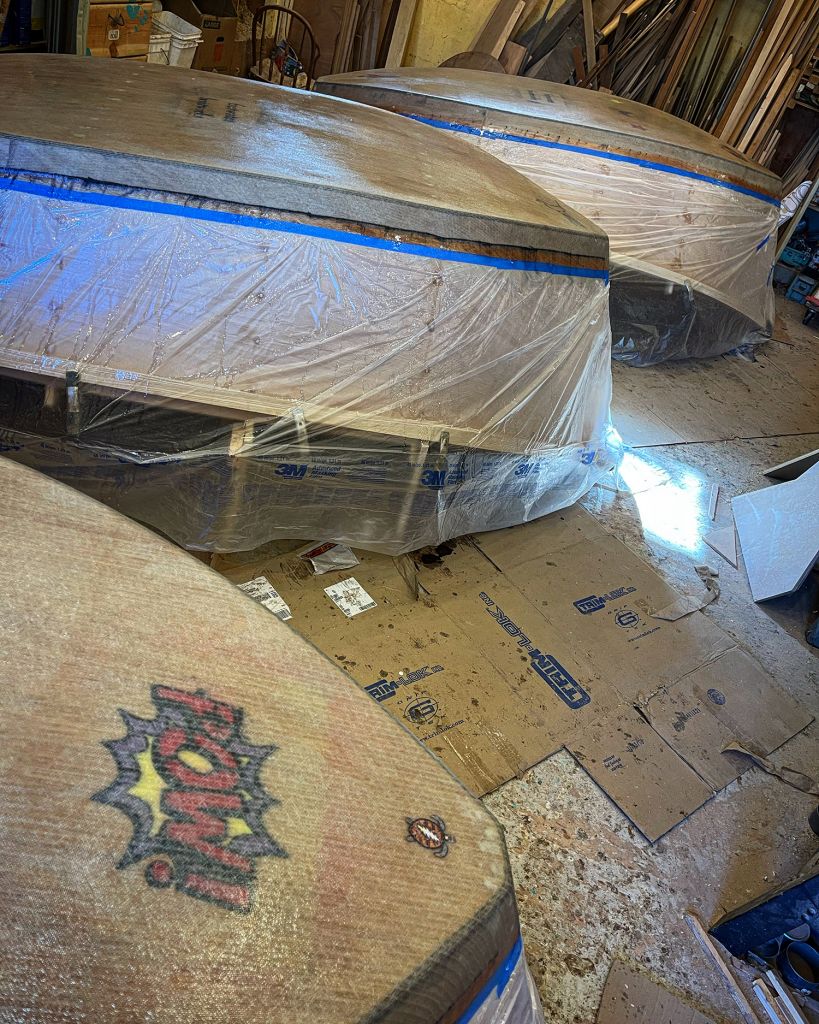 On with the flow coat. 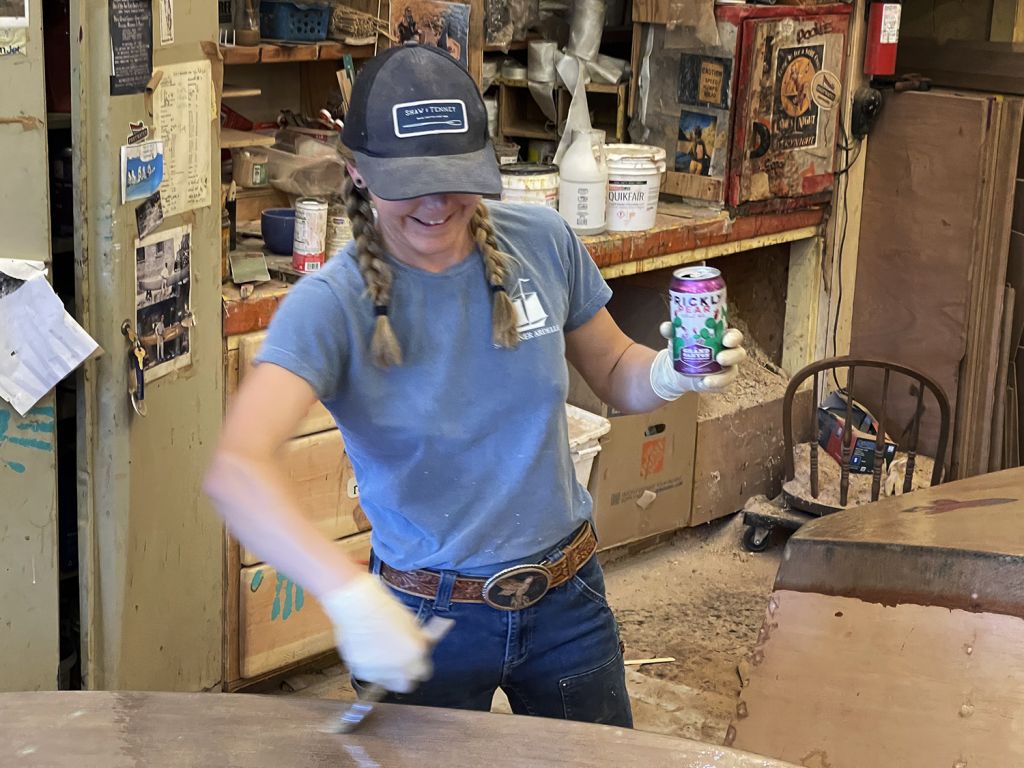 Once the rubber outer chines are glued on we roll them up. We had already built in the bulkheads and much of the deck framing when we built the ribs, saving a great amount of difficult fitting later on. Now we are projecting the deck elevations onto the side walls and creating the weird-shaped supports. A flat plane intersecting a tilted cylinder makes a peculiar curve. 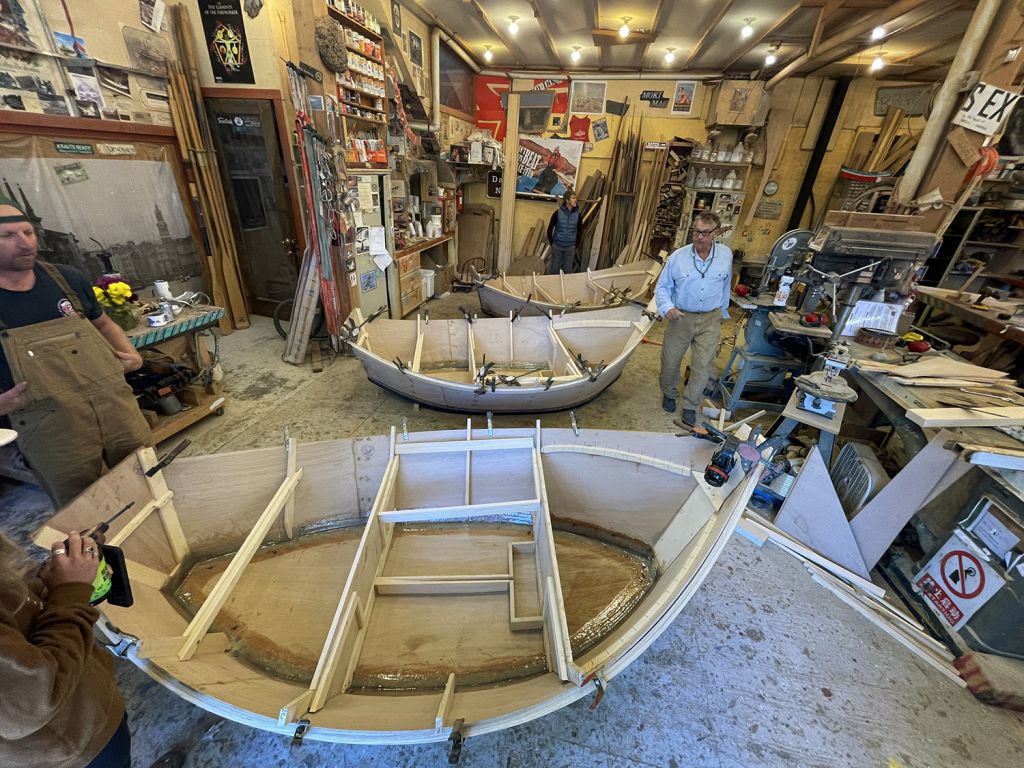 Mike Bridges, in our last WoodenBoat course, invented a quick way to make these odd supports. First, project the line to the side wall. Then kert a support stick so it will bend in, clamp it in place, and transfer the curve. So simple. Then cut it on the band saw and glue it in. 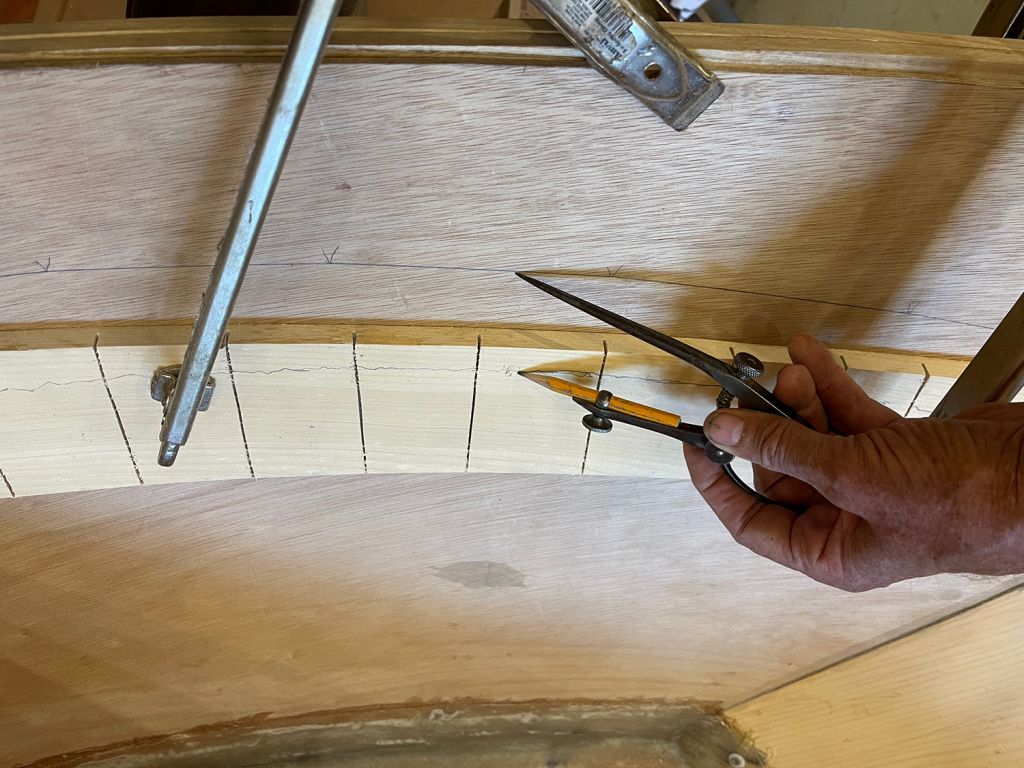 It was time for Cricket and I to go East to Lowell’s Boat Shop for two weeks, leaving Arroyo and Glade in charge with Bruce’s help. It was the first time either of them had been in charge of many of the next steps. They did superbly. 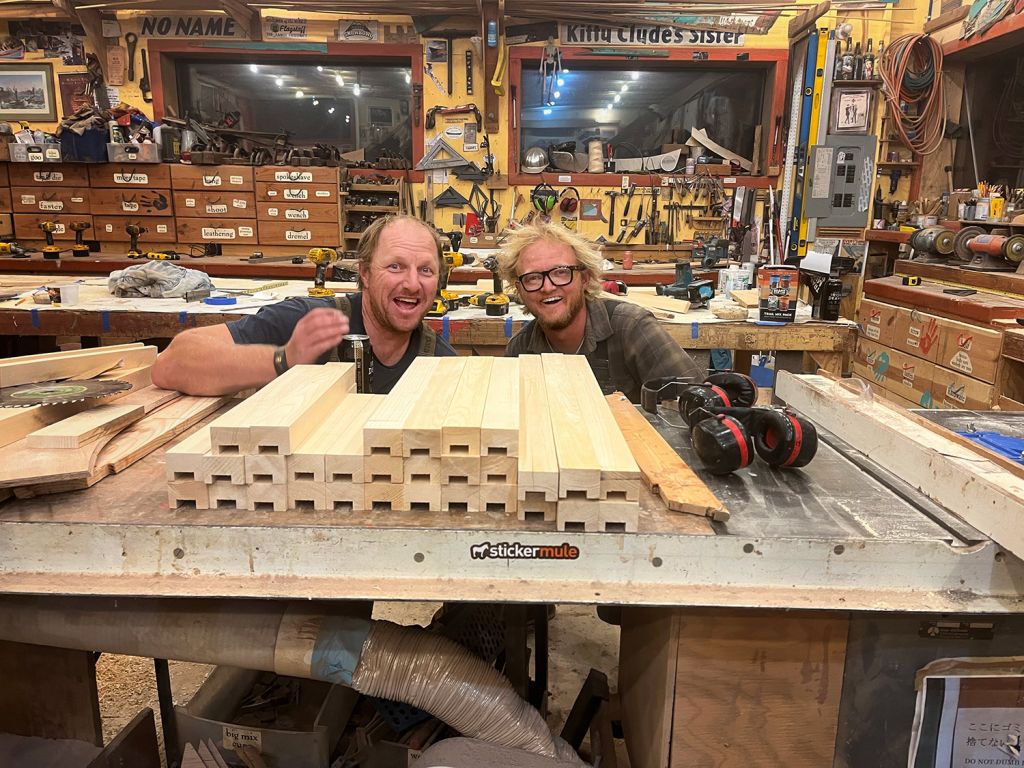 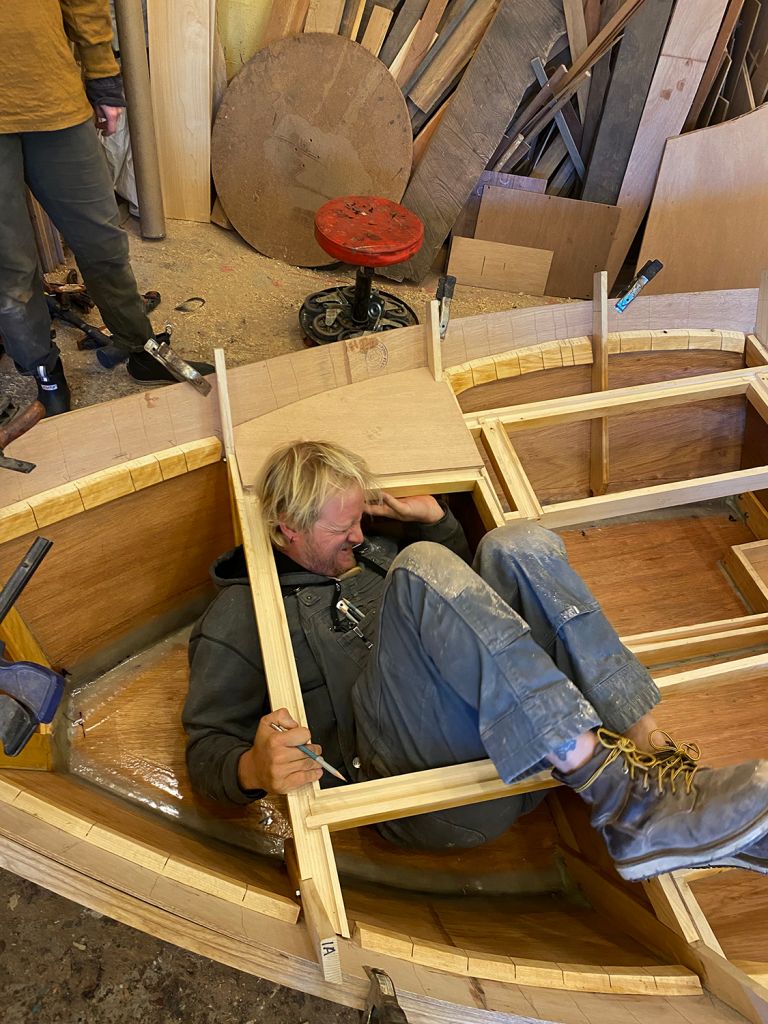 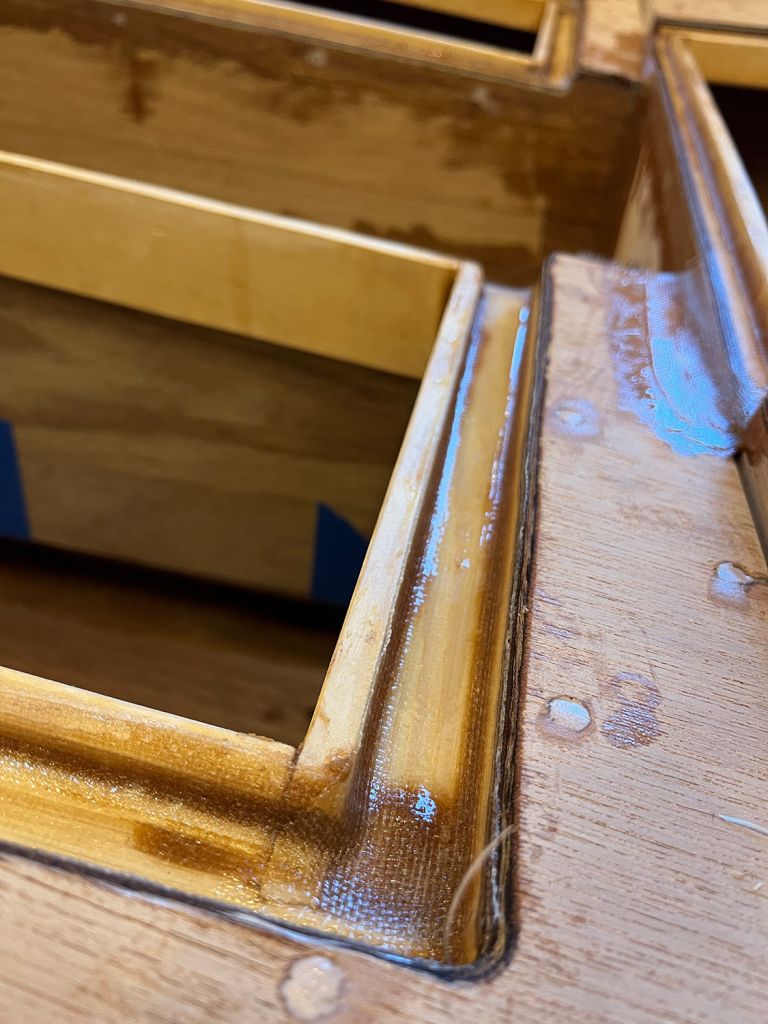 We have an issue here. Arroyo’s young daughter Daisy seems to have fallen in love with boatshop work. I don’t know if we can save her. 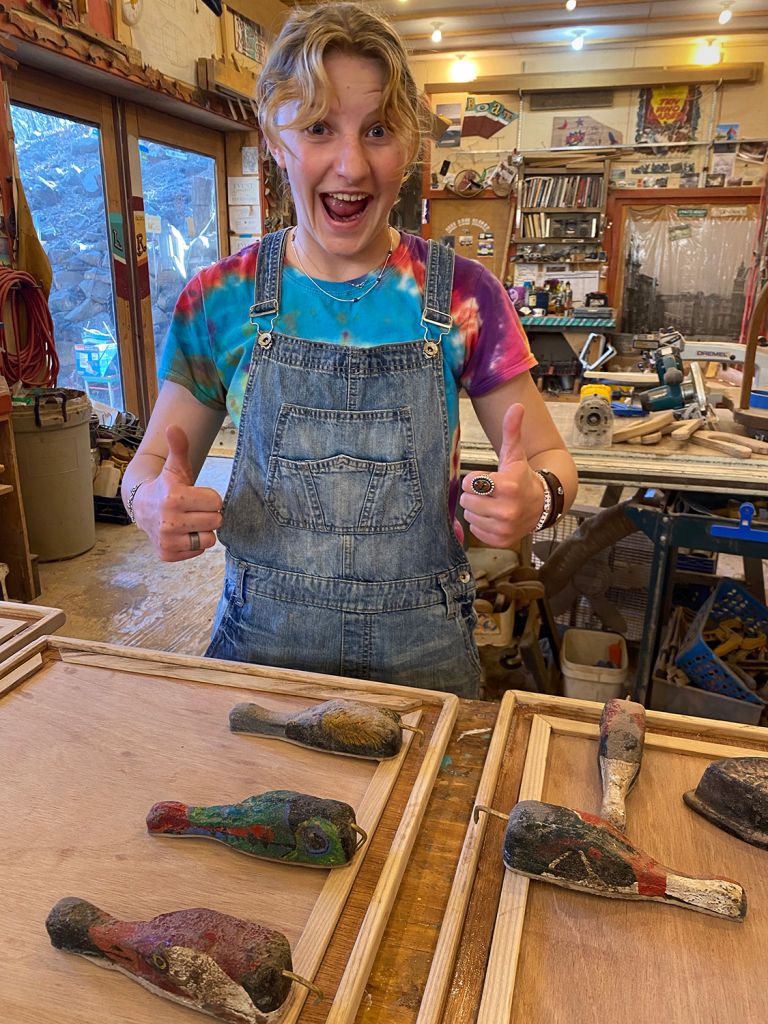 Boats are decked and the lids are finishing up. 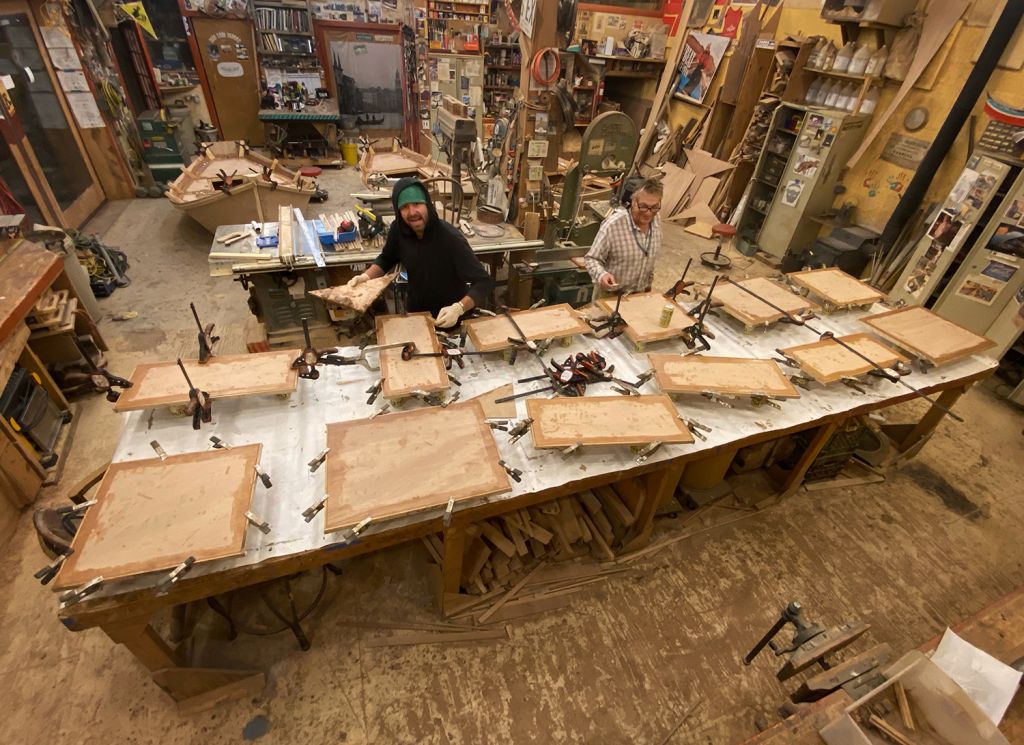 While the cats are away, the mice will play. 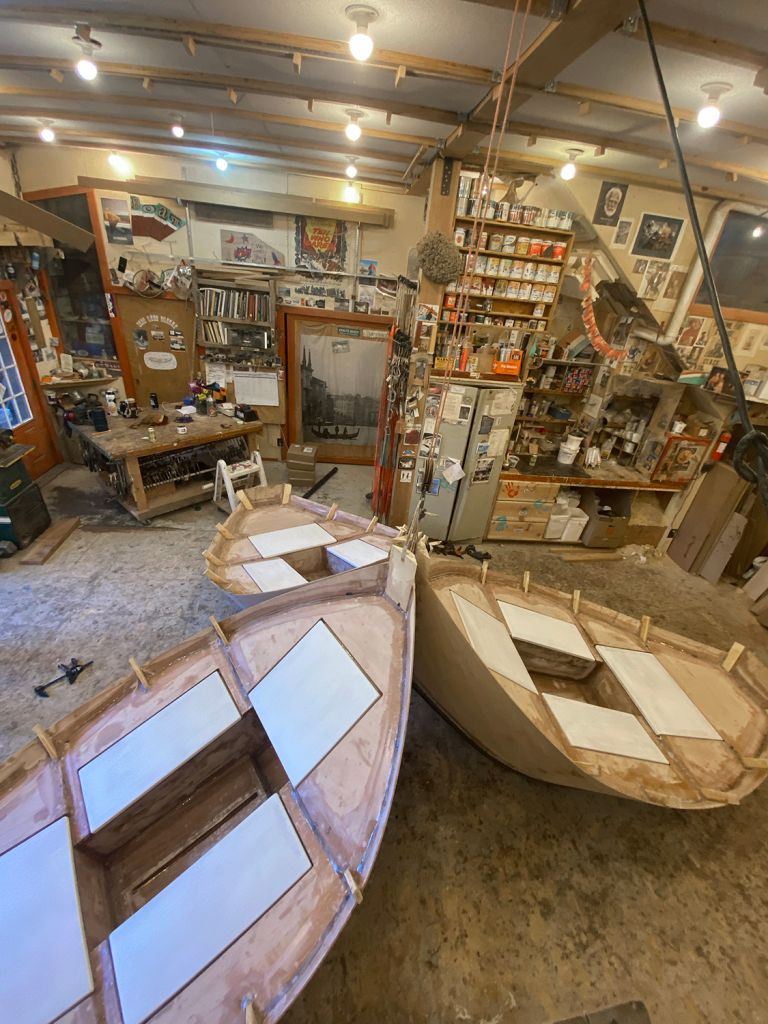 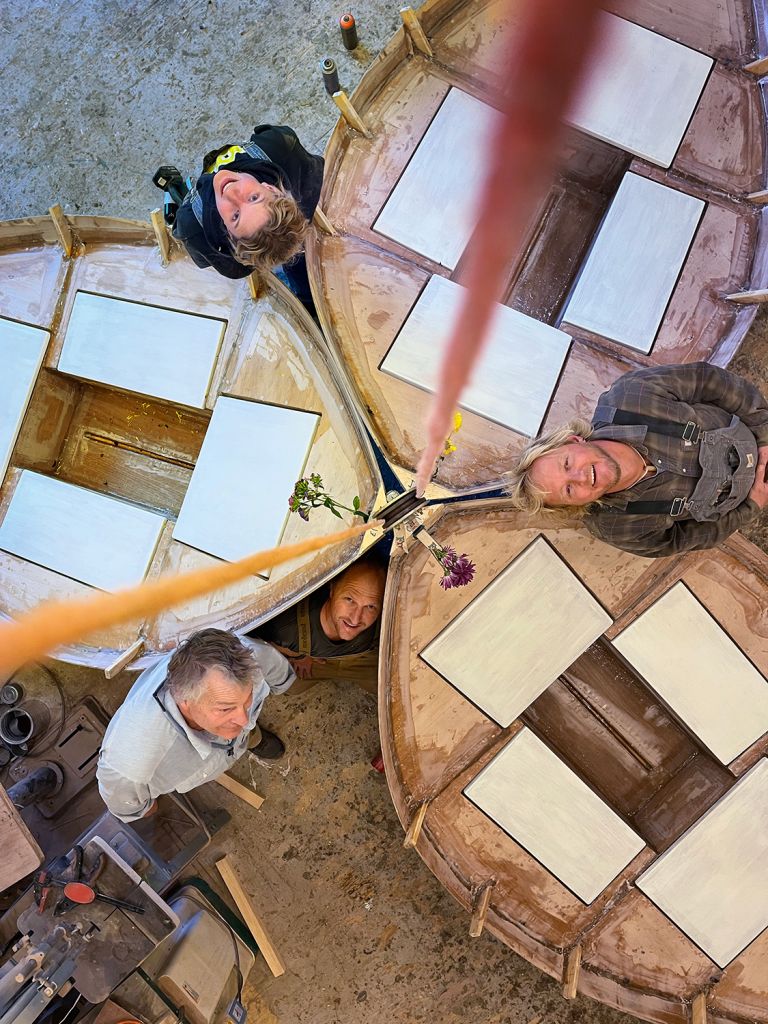 Cricket and I got back in time to see Deanna going insane. She has decided to try the Japanese system of Shou Sugi Ban on her gunwales. It involves scorching and staining them. She looks to be having just a little bit too much fun. 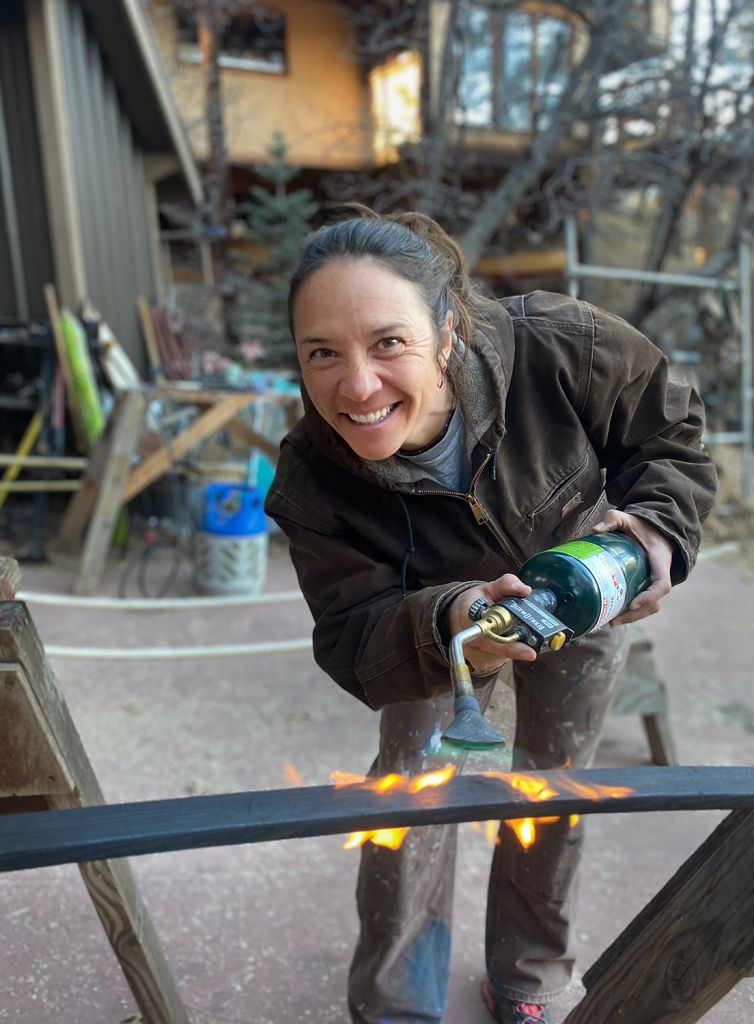 Her Doryak will be named Colibrî, spanish for humming bird, and the gunwales emulate that irridescense. 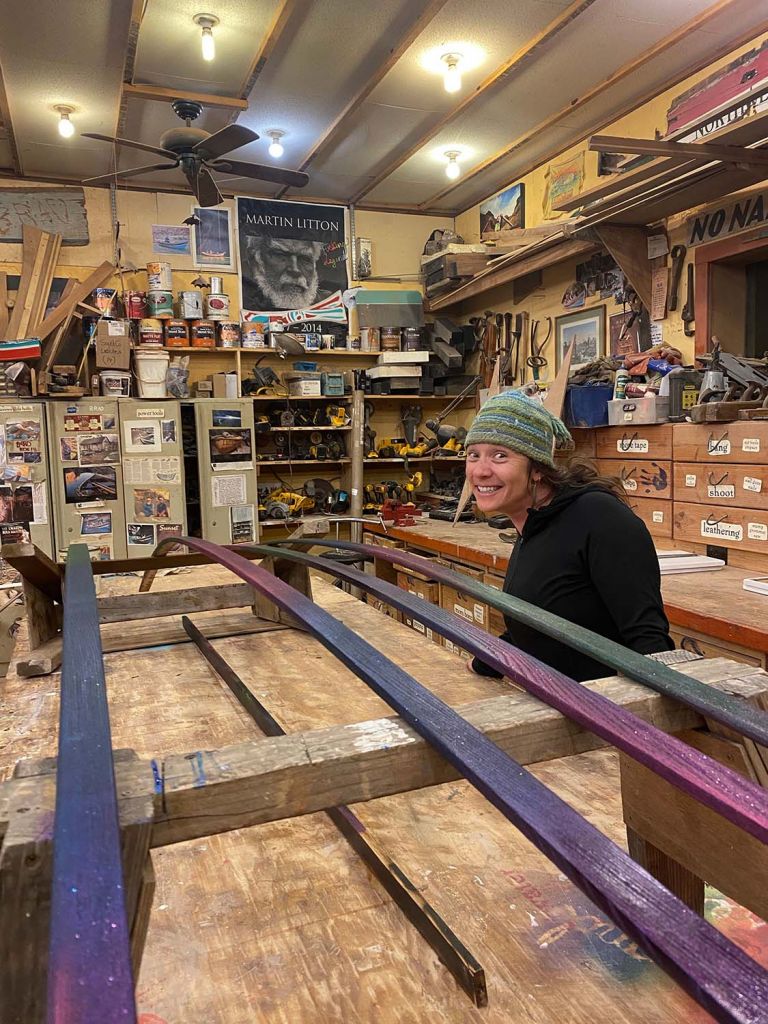 Finishing up behind where the gunwales will go. 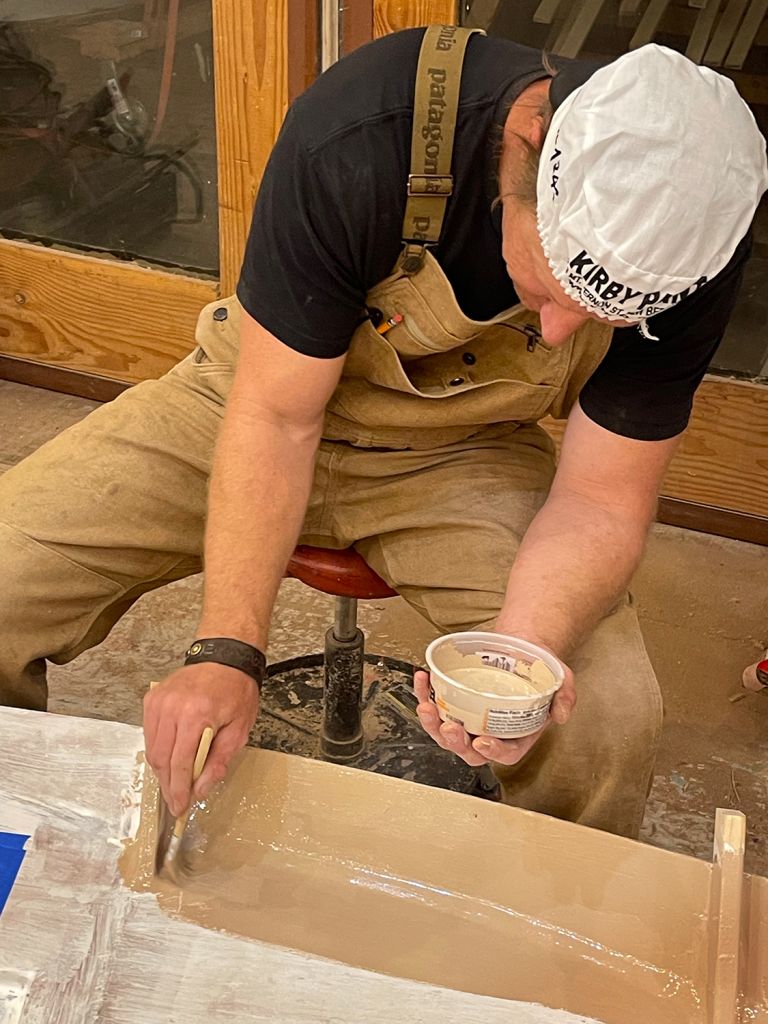 Yesterday Arroyo and I blasted on the gunwales with Bryan’s help. Here’s Arroyo sanding and routing Deanna’s crazy gunwales. Now the trick will be for her to touch them up and match the sides. Should be an exciting process. 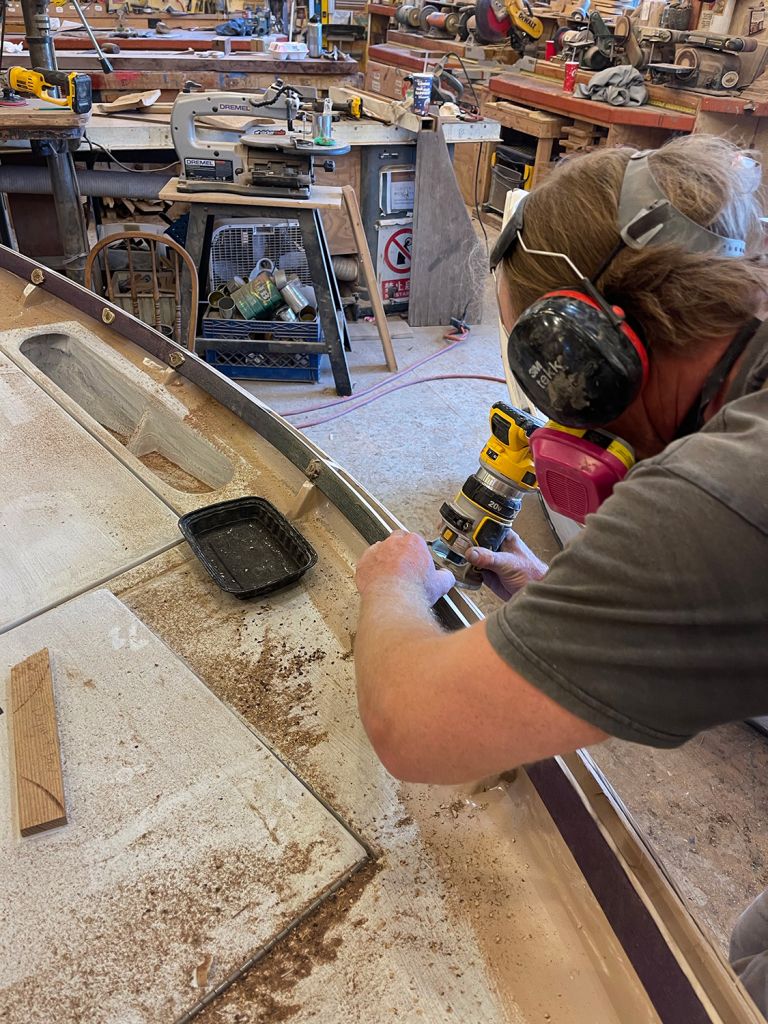 Bruce’s boat Lost Yak, named for a wild Class-5 rapid on the now-dammed Bio Bio River in Chile, where he and I used to commit criminal negligence with boatloads of innocent paying clients. 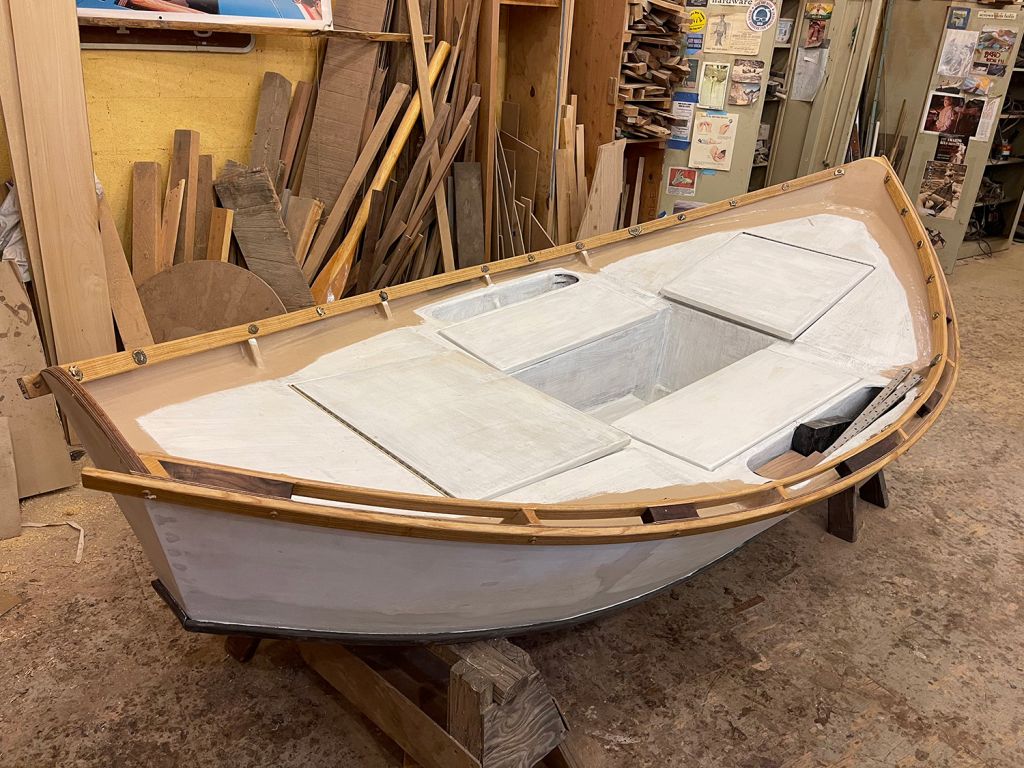 They are really close to done, but Bruce had to go back to work in Jackson, and Arroyo and Deanna are heading to Mexico for December. So the boats will go in cold storage until after New Years. 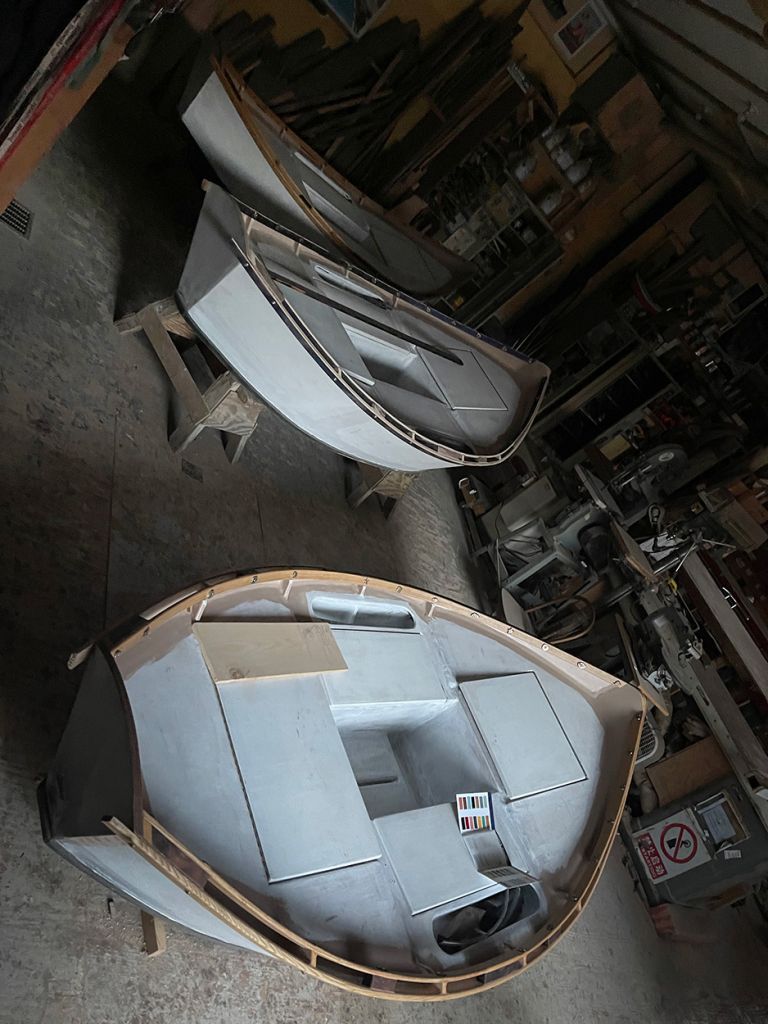