I just got word that the great boat designer and boatbuilder Jerry Briggs passed this month at 86. His iconic Grand Canyon Dories, built between 1971 and 1982, carry on his legacy in beauty and style. He set the bar so high we’ve never been able to equal it–only emulate it. Row In Peace, my friend. 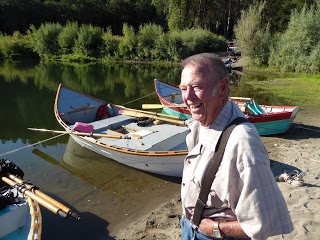 Here is a notice from his family:

He was born in Grants Pass in 1932 to Elmer Briggs and Nellie Briggs (Stone). Jerry was a wooden boat builder. He was the designer and manufacturer of the Rogue River Special drift boat that evolved from the early design wood plank row boat his father built. Elmer rowed and pike-poled this boat on the Rogue River. Jerry continued his father’s river guide and outfitting business, adding a boat shop, which is still a successful business run by his son-in-law, Bret Clark, and daughter, LeeAnn Clark.

Jerry advocated tirelessly to keep Oregon rivers publicly accessible. He was a proud and active member of the Oregon Guides and Packers. He was hired by a Grand Canyon outfitter to design a dory to run the canyon. This craft was completely deck-over and had a self-bailing feature. These dories are still the first choice for Grand Canyon guides. Jerry also built the early Hellgate jet boats for Grant Garcia, his friend and founder of Hellgate Jet Boat Trips. He and Grant raced hydroplanes in the very early days, when hydroplane racing was started.

Jerry loved to hunt, fish, dig clams, find wild mushrooms, garden and raise beef cattle. Finding much joy in preparing and sharing these items with his family and friends.

He was a veteran of the Korean War.

No funeral services to be held, fulfilling his wishes.