brdfrd2020-12-12T01:11:05+00:00March 20th, 2018|News|
There are a lot of things I really love doing, but working extensively with fiberglass (“frozen snot”) is not high on the list. In spite of that, last year I made a prototype cooler for my summer employer, Arizona Raft Adventures (AzRA). The reason being that our old coolers are ungodly heavy, even when empty, and are injected with urethane foam as insulation–which slowly saturates with water due to pinhole leaks. And all coolers get leaks, even if you can’t see them. As the coolers get heavier, they lose their efficiency. And our backs hurt more.
With some guidance from my epoxy mentor Greg Loehr at Resin Research, we created the ChillyBin 276–a 276-quart cooler that is lighter than any other comparable sized cooler on the market, and should outlast them as well. A couple features–Handles where we need them in order to load with less trauma; an off-center drain so we can access it without derigging; high density polyethylene skids for ease dragging it in and out of the truck; impermeable styrofoam insulation so it cannot waterlog over the coming decades; 14% more capacity than the biggest current cooler; and nearly 100 pounds lighter than the heaviest of our current coolers. 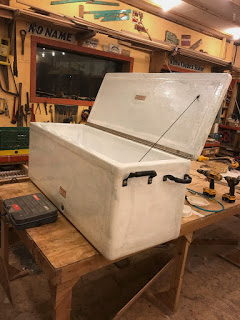 Well, the prototype got good reviews, especially from the truck driver who has to drag the loaded coolers in and out of the truck every trip. The only complaint had to do with how good the seal was–after opening and closing the cooler, the warm air that entered the cooler would chill off enough to contract and hold the lid shut. I decided that was more of an asset than a flaw. Anyhow, AzRA ordered four more this year, so last Thursday we fired up the Snotworks.

This time around we pre-glassed all the interior walls, which was way easier than doing it after we’d built the boxes. It also gave us way smoother glass work. Then we glassed the interior corners and took the boxes outdoors to round off the outside corners. 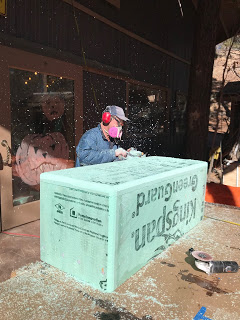 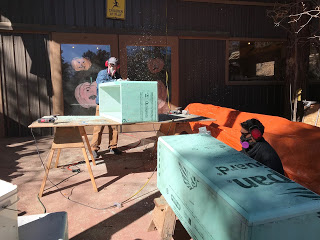 A couple days ago Janek noticed that on our prototype ChillyBin the fiberglass directly beneath the Boatman’s Bony Butt (BBB) has begun to delaminate from the foam from repeated flexing. We’re hoping to prevent that in the future by laminating in a sheet of plywood to better deflect the Butt Bone Impact (BBI). 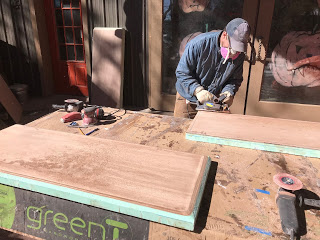 Day five and the basic boxes are nearly complete, with the lids close to done. And Owen and I are itching to be done with the project. With luck these will be done in a couple more days and we can get back to boat work. AzRA is also buying four new Yeti coolers which will be evaluated alongside the ChillyBins. We are secretly hoping the Yetis win. Then we won’t have to engage in this wretched snottery again. 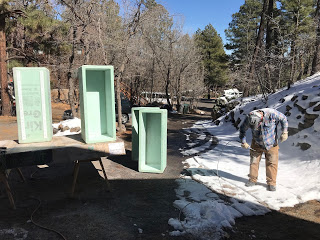 Meanwhile, our pathetic and fitful winter is giving way to spring. I have been worried that all our flower bulbs may have died–or at least had to go into counseling–due to our warm, arid winter punctuated with dumps of snow. The daffodils have tried four or five times to celebrate springtime only to be thumped into the earth by a snowfall and deep freeze. But the green swords are rising once again. The first stubborn crocus is about to bloom. 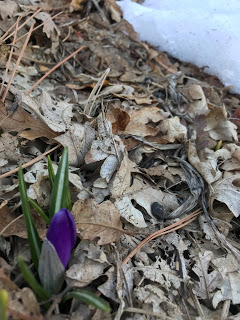