I seem to have been a negligent bloggerist. A seventy-day hiatus in prime blogging season. I have lots of excuses. A lingering cold/flu/thing, four classes, a change in thyroid meds, and a handful of other ridiculous commitments that pretty much overwhelmed me. Instead of hitting the ground running, I’ve been hitting the bed whimpering. I need a new agent.

But things are slowing down and I’m speeding up.

Okay. So. Where were we? Finishing up Bears Ears. Yeah. That’s it. Here are the gunwales going on. It takes good coffee to work this fast, and a beer to calm down afterward. 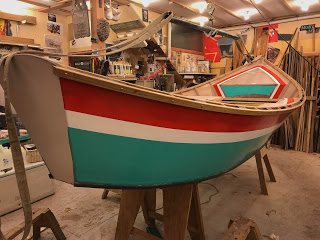 We are building camber into the hatch lids so they’ll seal better. Maybe. 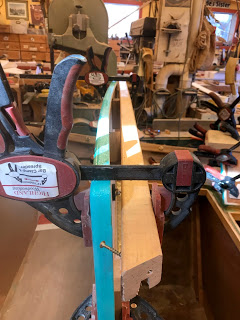 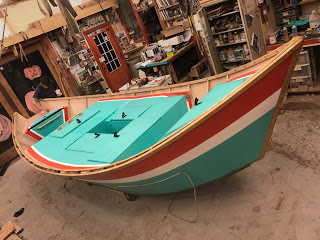 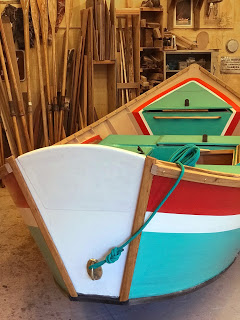 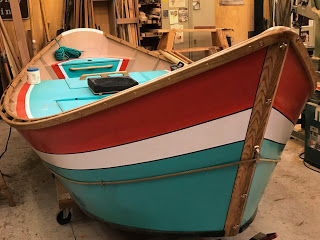 Wasn’t there a book called Men to Match My Mountains? Perhaps A Prow to Parallel the Peaks? 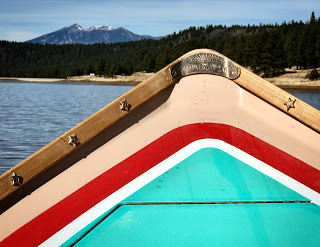 Oh. There were also a few interruptions. RJ showed up with the Surprise Canyon in need of fiberglassing. It was perhaps the last unadulterated Briggs hull, and RJ held out as long as he could stand it before going the frozen-snot route. But it was time. Off with the bumpers and all the paint. 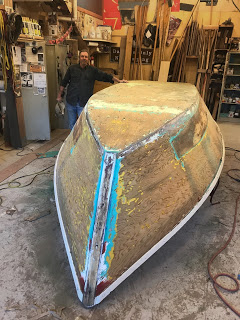 On with the killer bottom and sides. 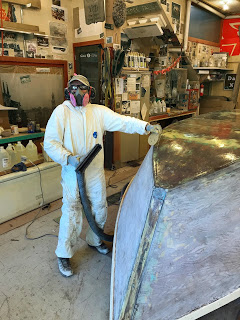 Out with the annoying extra framing in the cross-hatches. Boom. Done. Modernized. I do feel a bit of guilt, but not too much. 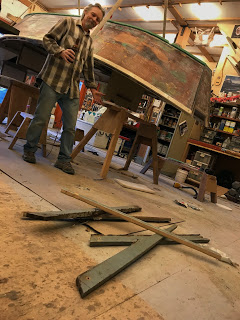 And then there was this other boat I decided to build. A one-third scale Briggs dory bookshelf/geegaw-display/shrine. I was to be honored as a Featured Artist at the Whale Foundation WingDing, which also means you gots to come up with a killer donation for the auction. Sneaky trick, that. We lofted it, made the parts, and built the world’s smallest strongback. 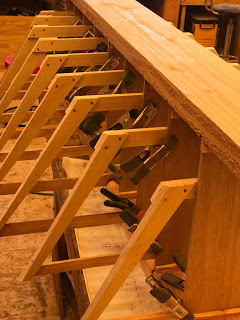 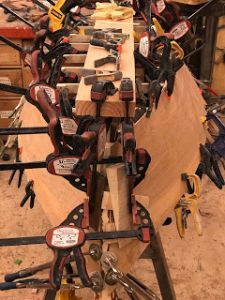 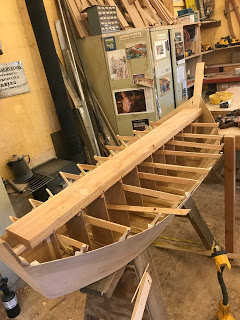 A pretty boat at that. 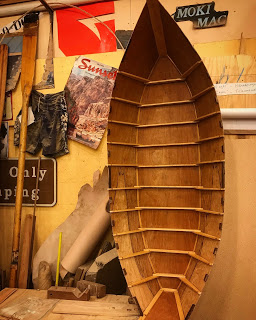 Is this a full-size boat or the wee one? 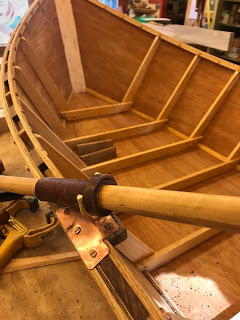 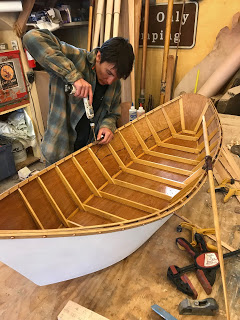 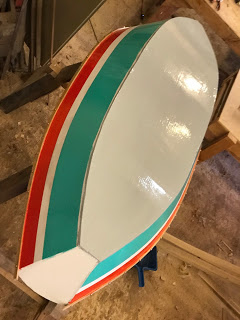 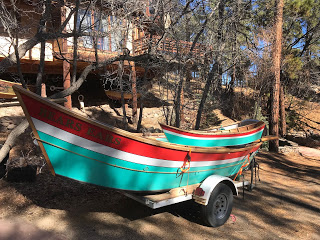 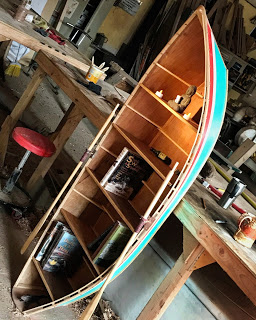 Of course all this is going on in between and/or in spite of teaching and succumbing to the seasonal mung. But then there was this too: Kate came out from Rhode Island to do a presentation with her carved boat and myself (me being the midwife). So we put together a show while her beau Brian got the boat ready. We took it downtown, rolled it up Beaver Street to the brewery, jammed it in the door and had a concert with Peter McLaughlin. (During which we figured out that Peter played at Kate’s parents’ wedding long ago–and here he was singing in a boat built by the offspring of that wedding–it was pretty cool.) With some of Kate’s amazing prints from the boat hanging in the background. 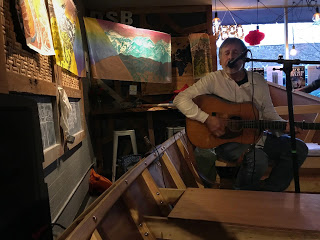 Then an impromptu parade down Beaver Street to the Orpheum. Peter singing, Kate riding along like Cleopatra. 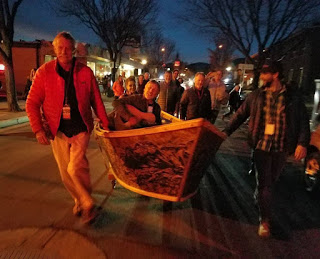 And into the side door of the Orpheum for our presentation. Then back out and home to get ready for the Film Fest after-hours party. (Which also meant that the night before we had to tear down all the workbenches from oar class, build a stage, tidy up, and decorate.) But it was a hell of a party. Peter played another set. 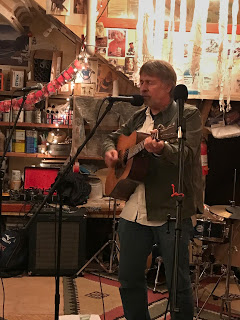 And late in the evening Craig Childs and the Scatterlithics took the stage for a most amazing performance of Craig’s own genre–somewhere between a poetry slam, jazz improvisation, extemporaneous fourth dimensional mind travel, and I’m not sure quite what. Neither is Craig. 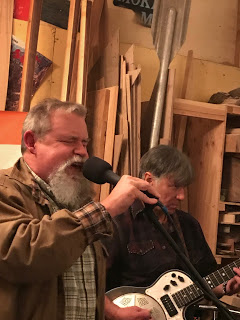 The party shut down early–about 3am. Then it was up the next morning to rebuild the shop for boatbuilding class. And get another presentation ready for the WingDing that night. And a talk. 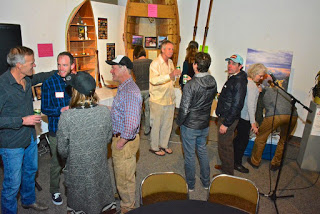 By then I was running on fumes, but it was a lovely evening, crowned by a fabulous bidding war for the wee dory bookcase. She brought in over $2500 for a great cause. Then up at dawn to teach an eight-day boatbuilding class.

Is it beginning to make sense why the blog has been neglected?

I survived the class, and some boat remodeling afterward and was finally able to take a little vacation. Bears Ears and I headed up to Colorado to visit friends, then on to Moab to meet Bears Ears’s step-sisters. The gang at Eddyline Welding have been building three aluminum dories to the same lines I drew up for Bears Ears. And they are lovely. And so similar it is eerie. I’ve never seen welding this meticulous, or an aluminum boat with such graceful curves. Two of them will get wooden gunwales down here at Fretwater in a couple weeks and join the AzRA fleet. The third one is for sale—get it while it’s hot. Click here to find their blog about the building of the boats: CLICK, And to see a video of the build, click HERE. 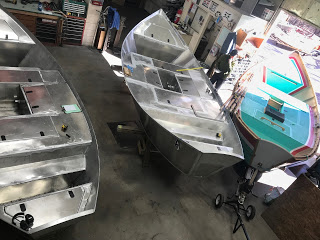 They weigh in almost exactly the same as Bears Ears–a bit above 650 lbs, which makes sense. A normal Briggs runs somewhere in the low 500s, and these are 25% more commodious. 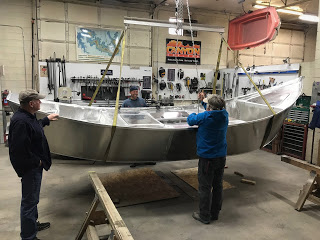 The aluminum sisters were not quite ready for the river, though, so we joined a small fleet of local aluminum boats for a run down the daily stretch. 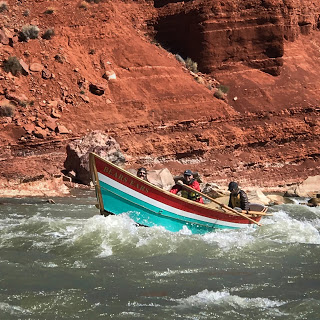 Check out the sexy lines and sweet tail lights on Nightcrawler. I can’t believe they trusted me to row it. 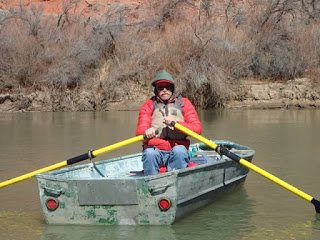