brdfrd2020-12-09T01:35:07+00:00October 28th, 2017|News|
In the summer of 2016 I got a text from my friend Kate Aitchison, who was finishing up a degree in printmaking at Rhode Island School of Design. “I got a residency to carve and build a boat in Santa Fe this January…” This is one of the benefits I get of being known as boat a boatbuilder and an eccentric. I sent her some Meranti plywood scraps to play with and see if they would work for woodcuts. I figured that would be the last of it.

But no. In January she showed up and we scarfed out the sides and floor for a 16′ McKenzie drift boat and she headed off to Santa Fe to carve. Again, I never really thought this would come to fruition. 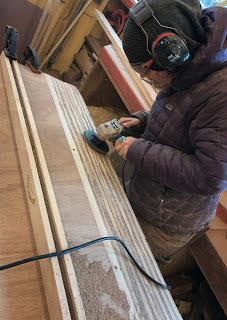 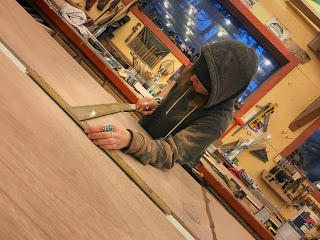 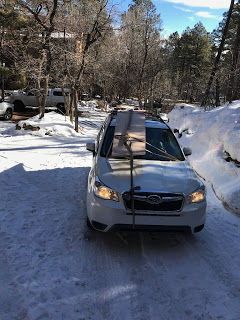 On March 1 she wrote: “I finally finished 32 feet of carving last night and realized I had gone into a black hole of pretty much doing nothing else for the past few weeks and only slightly losing my mind.” 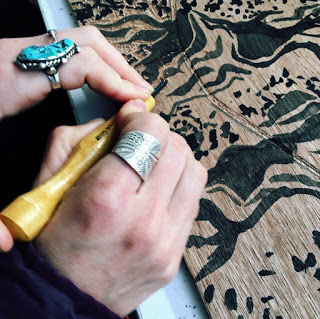 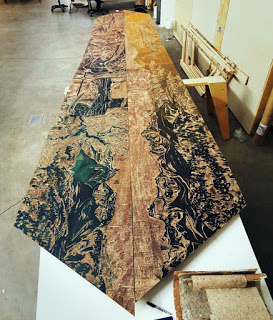 We made plans for her to make the rest of the parts of the boat this summer. Kate is a quick study and required little guidance in building the frames. We ripped out the chines and gunwales, and made a transom and bow post.

Well, she and her beau Brian showed up the day before yesterday to prepare for a build. They sanded and oiled all the parts, and we agreed to begin the build at noon yesterday. The carved panels, which were multicolored due to Kate having made prints off them, were gorgeous and impossible to absorb all 32 feet of them. Together they are an amazing montage of images of the San Juan River, from the mountains to its demise in Lake Powell.

Meanwhile another acquaintance rolled in with a boat. Nate’s Eleanor is an ancient McKenzie that he wants to refurbish. After a good long look I got a strong suspicion that it was built by the legendary Keith Steele on the banks of the McKenzie, perhaps fifty years ago. So many details were nearly identical to the construction of the Betty Boop, which I restored six years ago–also a Steele boat. I sent a few diagnostic photos to Steele’s son Steve, who is still in the business. Yup. It is. How cool is that? 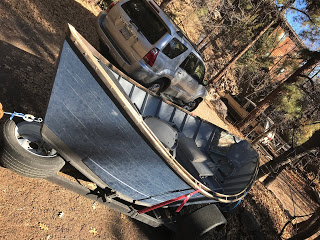 We found a bit of rot in one chine, and I recommended Nate strip the boat as best as possible, and replace the floor and bad chine parts. I asked if he wanted to see how that was done…we just happen to be building one tomorrow… Hah! Two more hands on the project!

By noon yesterday Kate and Brian had drilled and countersunk all the screw holes on the side panels and we were ready to begin. Janek and I, Kate and Brian, and Nate, with an occasional extra hand here and there. Wow. Many hands make light work. By far the fastest assembly I have been a part of. Less than an hour to assemble the hull, maybe an hour and a half to drop in the inner chines.

We hauled it indoors and took a pizza break for maybe 45 minutes, then started in on the floor. It went quickly as well, step by step with only a few horrified screams.

By a little after seven the bottom and both outer chines were on and the boat was right side up. At this point we nearly called it a day, as were were pretty whupped from the intensity of the build. But Brian (I’m blaming him anyhow) said, “Hell, let’s go for it. ” We made a pot of coffee and launched into the gunwales. By eleven all four gunwales were on and we were in high gear. By midnight the gunwales were routed, sanded, bow posts and transom rounded, and the entire of the interior of the boat well oiled. As were we. We shut the camera off a bit after midnight, ready to hit the sack.

I’d had a wildly optimistic hunch that maybe we could do all that in one day, but seriously, I did not think it would happen. It happened. An hour and a half later we were still staring at the boat, flabbergasted that it existed, stunned by its beauty. The woodcuts were amazing on the flat panels, but wrapped into a graceful hull–you have to see it to really get it. Champagne, whiskey, rum, beer,  and turpentine fumes also add a lot. These pictures don’t do it justice. 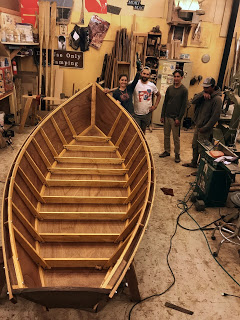 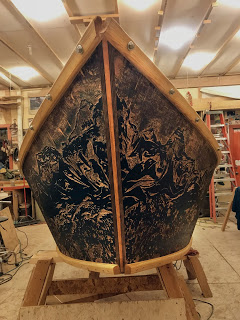 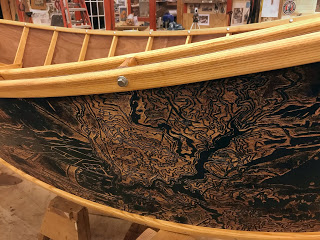 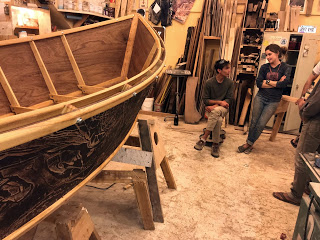 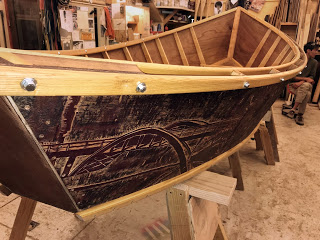 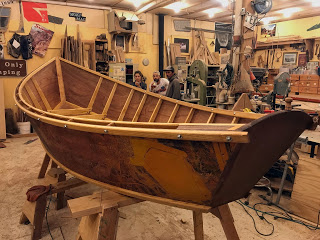 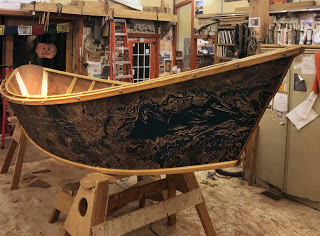 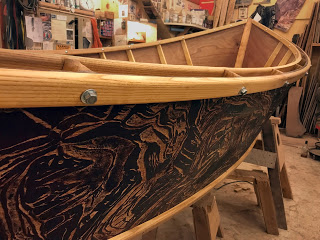 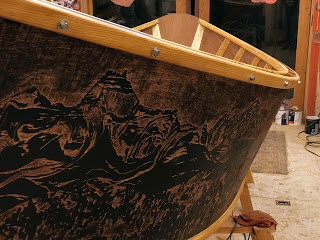 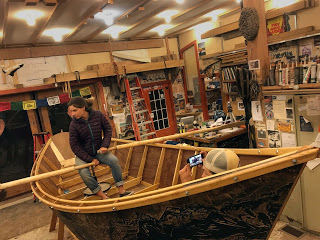 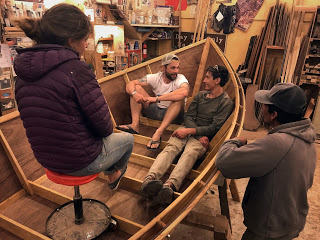 Even in the light of day, with last night’s electric buzz transformed into a drained, deadened hangover, the boat is still beyond mind-blowing. 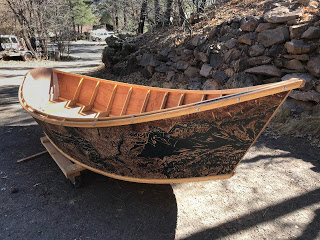 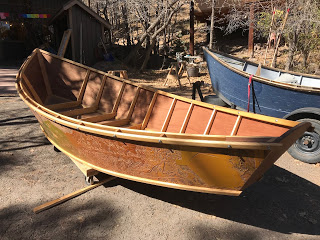 She’ll be here for a couple days. Come by and see her. She’s dressed up for tomorrow night’s music event. 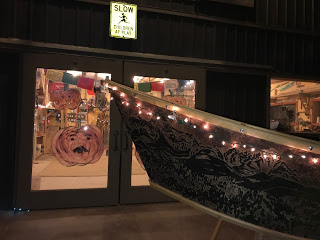 Speaking of which, see attached invite: