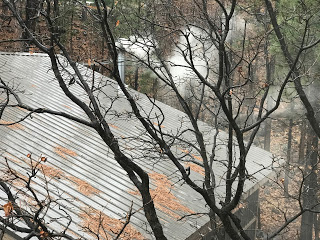 Let’s see. With Omo essentially rebuilt it’s time to put the bottom back in shape. 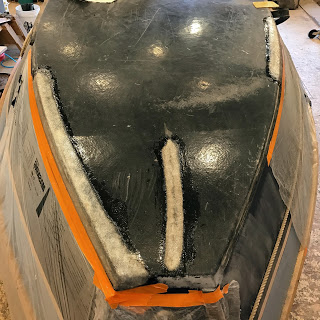 And repaint her hull. Paint dries a lot quicker up by the ceiling where the warm air hangs out. 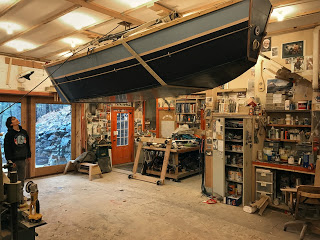 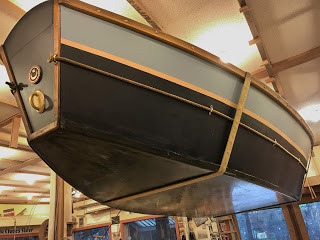 A couple shots from our sailing adventure last week. 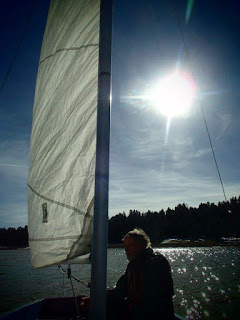 On to the next project. For the last thirty-five years since Jerry Briggs built his last Grand Canyon dory, many of us have been trying to nail down the exact lines. We have missed badly a few times, gotten really close on other attempts. But never totally nailed it. And as it turns out, it is un-nailable. There is more subtle variation in the fleet of thirty-six than we thought. Early ones have taller bow posts. The intricacies of assembling, even on Jerry’s old jig, gave latitude for individuality in the shape. So which one is the real Briggs boat? All of them are.

This week we re-lofted the lines we took of Andy Hutchinson’s Cottonwood, Briggs hull #33, built toward the end of the era back in 1981. We were as faithful and precise as we could be except one wee tweak. I added a 3/8″ curve to the normally flat center of bottom. Greg Loehr, my surfboard guru, insist that the water will be far happier about this. I think he’s right. Perfectly flat surfaces upset the flow. And besides, it just looks right on the lofting. Hell, I don’t know. But That’s how this one is being built.

Another difference–this time, instead of relying on a handed down side-panel pattern (which differs markedly from a side-panel pattern Roger Fletcher gave me of Briggs’s old template) we are going to build the boat on a strongback and see what the side panel shape really wants to be. And record that for the next boat.

So will this be the ultimate? Nope. Another attempt, and undoubtedly another sweet Briggs boat. But in the end, simply another unique member of the family.

With the lofting done, it’s time to start the boat. We begin by milling up some precious Port Orford cedar. Janek is taking that mainline nose hit as the sweet scent explodes out of the shavings. Memories of old dory hatches, days of my misspent youth, southern Oregon, Buzz Holmstrom, building boats. Electrifying. 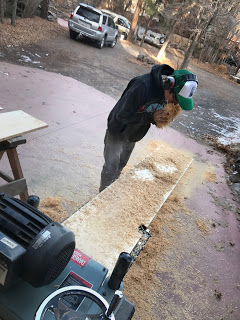 Then we chop the cedar into bits, building all the frames. We went ahead and lofted out the actual angles that the rib edges should be cut to in order to meet the side panel properly. From stem to stern we found many of them change markedly from top to bottom, creating a rolling bevel. We sorted this out last year for the bow post and transom with great results, but this time we are cutting rolling bevels on the ribs as well. Probably won’t make a difference, but hell, why not? Never been done. 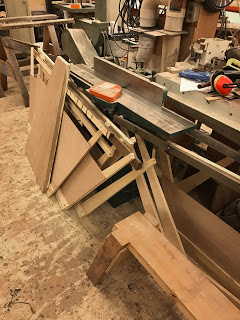 With classes looming next month, it is time to begin stocking up on supplies. I dropped a couple thousand bucks in Phoenix getting foundry supplies. Look at all that gold bullion! 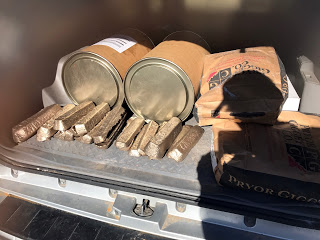 And a couple thousand more in plywood, shipped in from the coast. It doesn’t look that exciting, but that stack will build several beautiful boats. 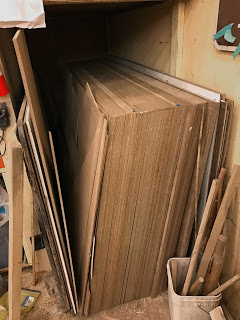 Time for another cup of coffee and a little more staring out the window. What will today bring?