Well, I’ve got about five days left in the shop before heading to a tropical paradise for a few weeks of R&R. So we are trying to get both boats in good shape before departing.  Yesterday we got all Omo’s latches and landings in order. Although there are a lot of parts of building a boat that are not my favorites, they all seem to last a blessedly short time. We are never doing the same thing two days in a row. Here are Justin and Chelsea niggling away with latch landings. 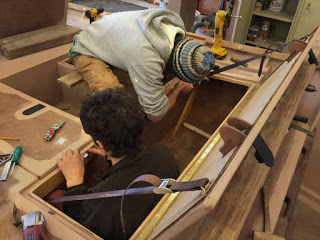 Magic happens. They latches are done, the hatches all work. The hinges are all sparkly and happy. Me too. Well, maybe I’m not all that sparkly. 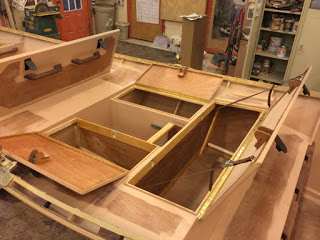 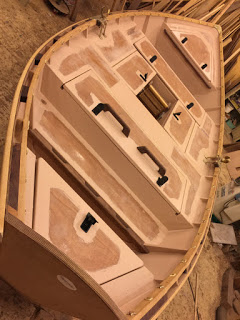 Big day today. Omo flipped over and got her bottom glassed. While her glass was kicking, Bob came down from the loft, got a bunch of topside details remedied, and flipped over for another coat of paint. 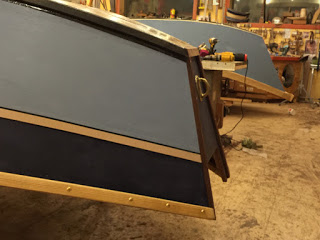 Omo got a flow coat of epoxy with graphite. They say the graphite makes the bottom slipperier when a rock decides to collide with the bottom, and less damage results. Hard saying, but it does look good, so I do it. The flow-coat kicked in what seems like seconds, so we were able to put on a coat of primer, thus readying her for her paint job tomorrow. 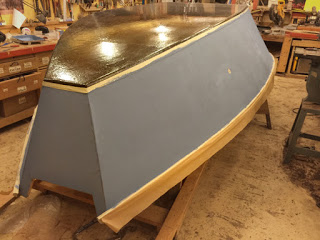 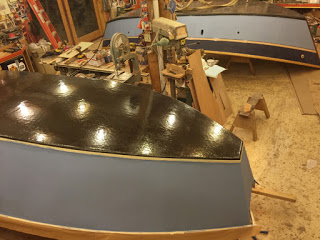 And speaking of tomorrow (that would be Thursday, January 21) if you’re in Flagstaff, come on down to the Orpheum in the evening for a really goofy show. In August 2013 we did a wild river trip with BBC, running Major Powell-style boats with a bunch of crazy Brits and a few deranged Americans. Tomorrow will be the USA premiere of the film, which showed in the UK a while back. I will be narrating a brief warm-up show with clips from several previous recreations of the Powell endeavor. Should be a hoot. And there is a bar there.

P.S. Keep your eyes open for my colorful umbrella. The Director hated it and kept making me take it down. But it does get a cameo shot.