brdfrd2020-11-27T17:49:52+00:00January 30th, 2015|News|
One of the things I kept wondering, as I laid on the gurney before each surgery is, “Why am I doing this? I can still walk…” But the deal is, it was starting to hurt real good most all the time and I was fast becoming bowlegged, as the interior parts of my knee rotted away with osteoarthritis. And the worse it gets, the less you walk or exercise, and the further you have to go with recovery, etc. etc. So at some point you gotta make a move. 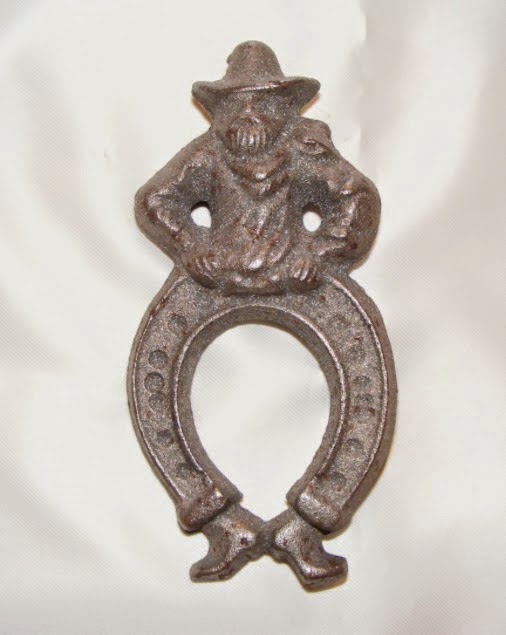 And of course, at this point, now that the surgery is all done, there’s not that much point in revisiting the rationale. It’s a done deal. Recovery is the thing now.

We upwrapped knee one, the left one, which I have named Lenny (le [ft]-knee) about two days out of surgery. Looks like a pretty clean job. 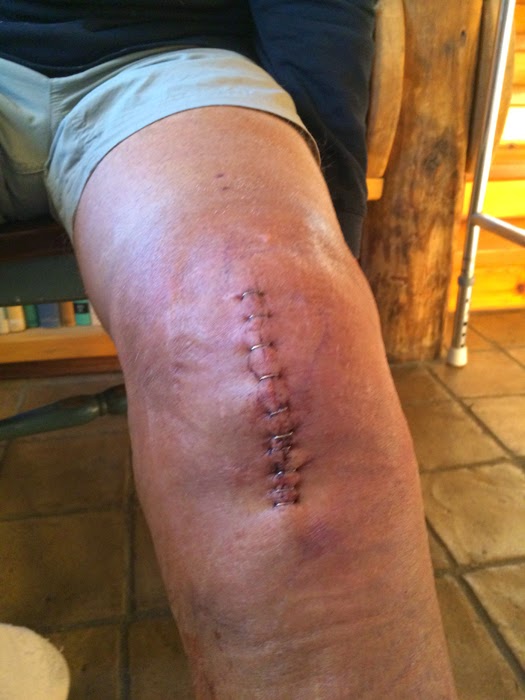 I wish I had had the wits to do a better documentation before the first surgery. But I didn’t. Anyhow, here is a shot of Lenny (post surgery) and Arnie (R-knee) pre-surgery. You can see why I am doing both. If left with one crooked, shorter leg, my back would soon be toast. 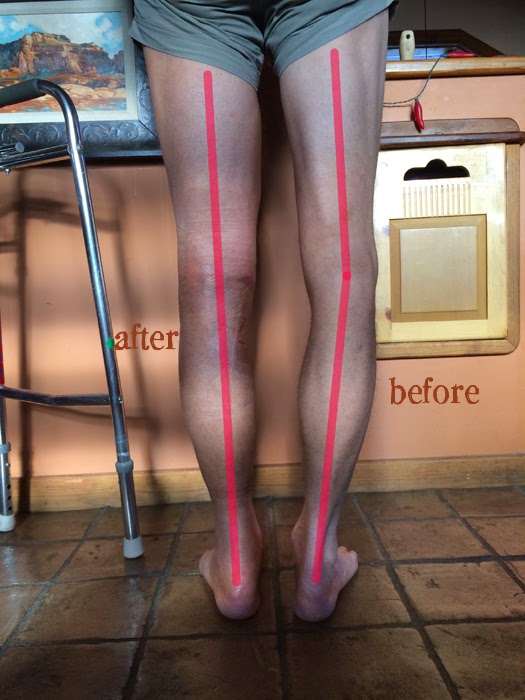 There’s not a lot to talk about during re-hab. Boring exercises that hurt like hell. But hey, look at that flex. 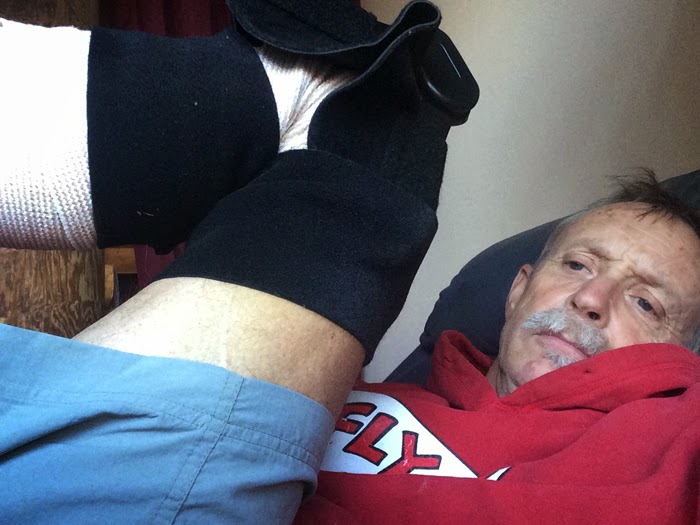 Two weeks later to the day I was back on the gurney for round two. And an hour or two later, back in the waah-bulance headed home. 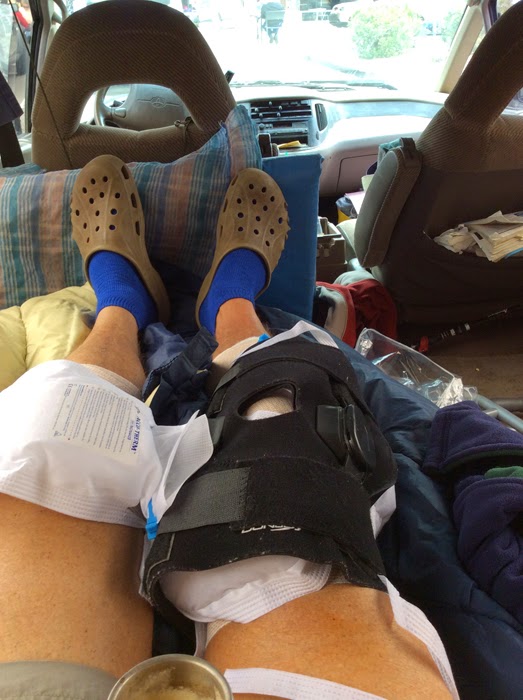 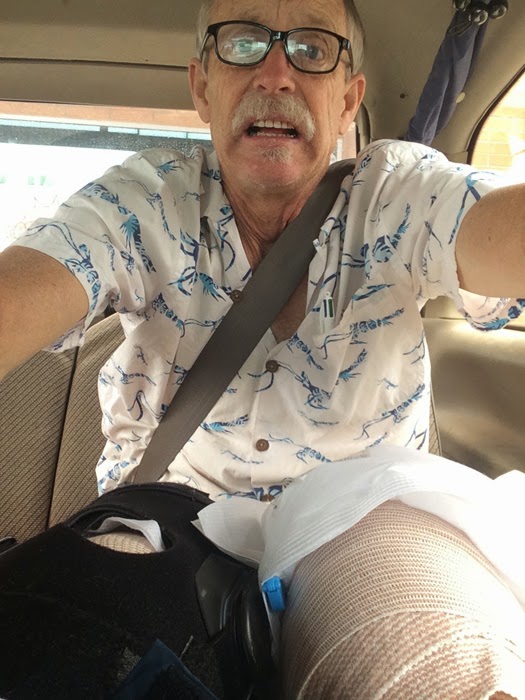 So now I get to do electrified leg lifts, with a zippy, zappy muscle re-education gizmo. Turns out my quadriceps forgot a lot of what they used to think was normal. A little shock therapy does wonders in reminding them how it all works. 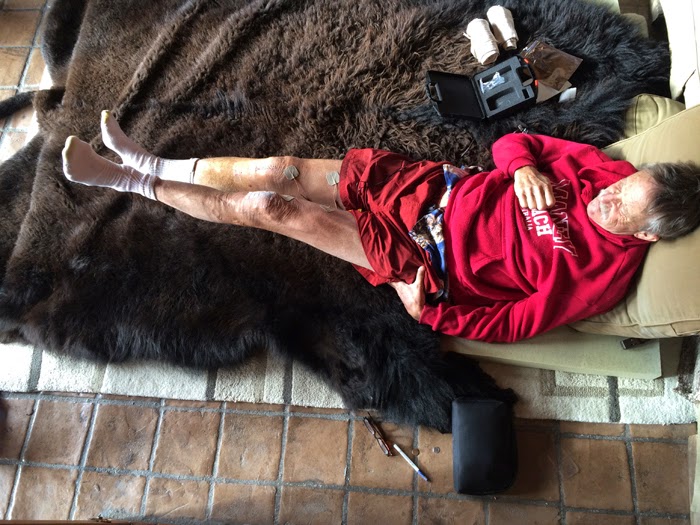 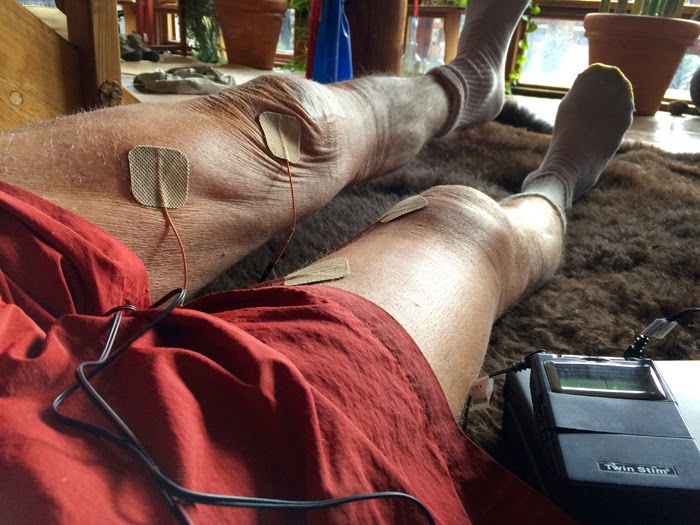 And the slow painful one: extended pole dancing for range of motion: 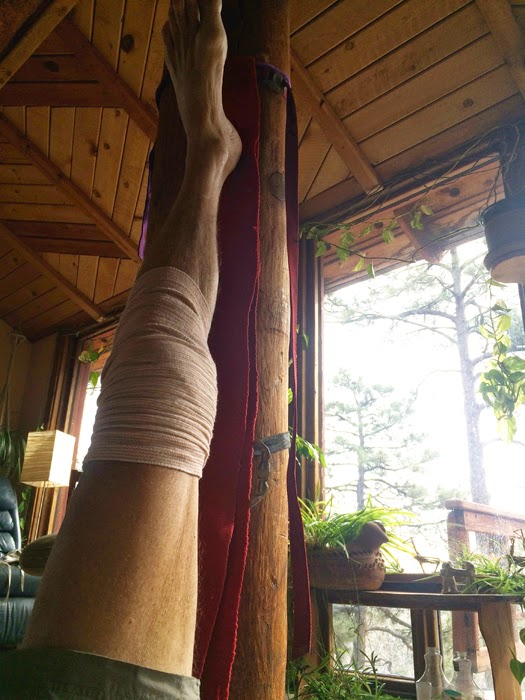 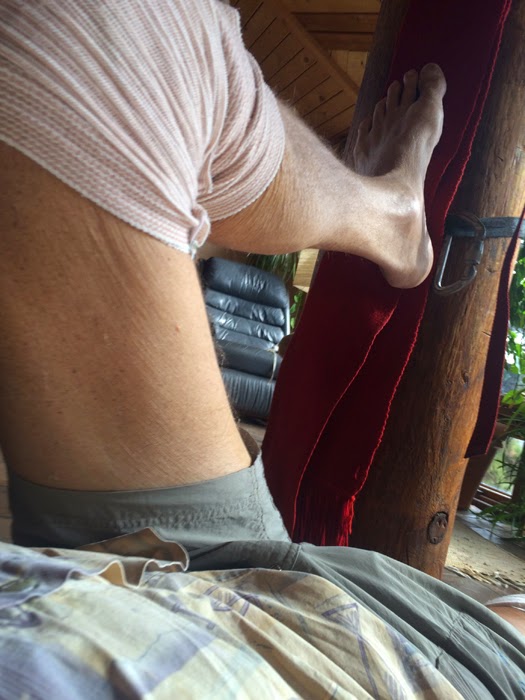 But nearly every day when I measure the flex with my goniometer (go-knee-ometer) I get rewarded with concrete signs of progress. Lenny broke 140 degrees yesterday. Amazing. Arnie is already in the mid-120s. 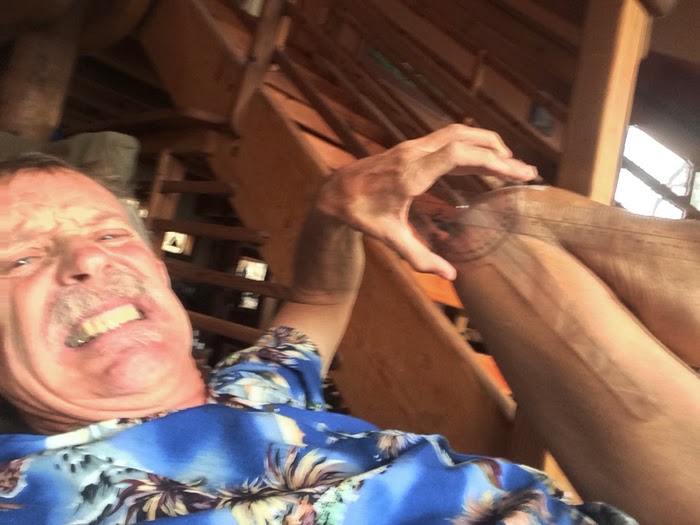 And some rubber band stretches. 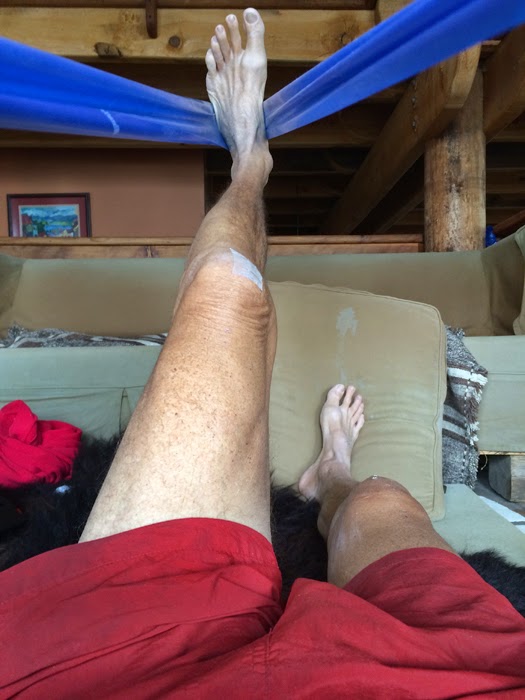 A bit of biking. Ow. 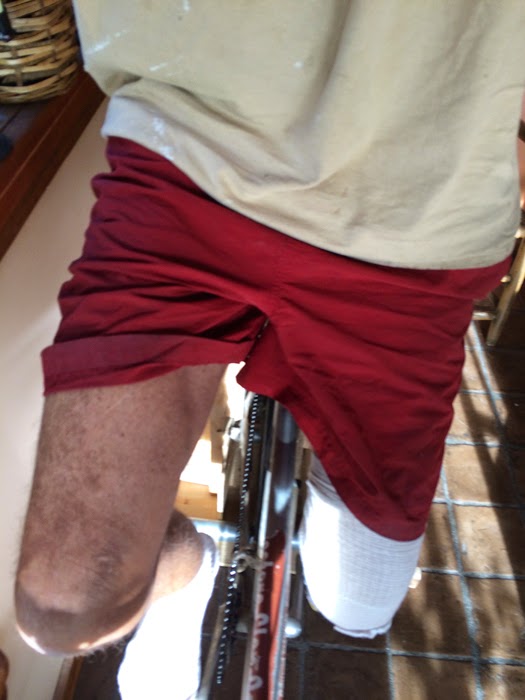 And the post-stretch icing. My favorite part. 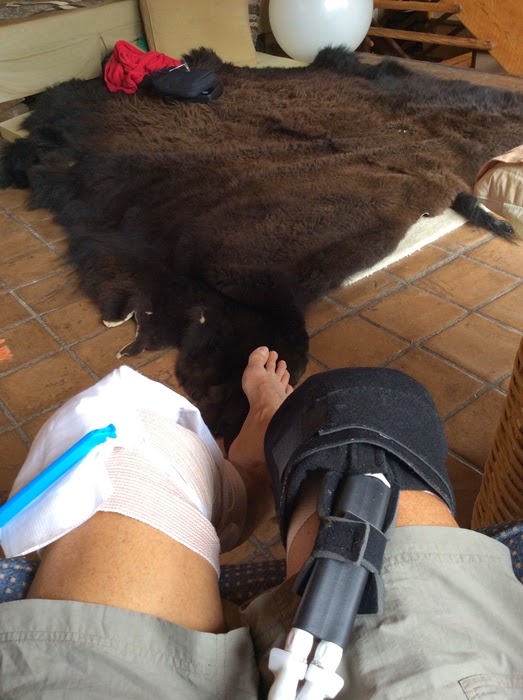 Two days out from the second surgery the comparison is re-assuring. Lenny is looking pretty clean, healed, and unswollen. Arnie is a bit pissy but has a good path laid out ahead of him. 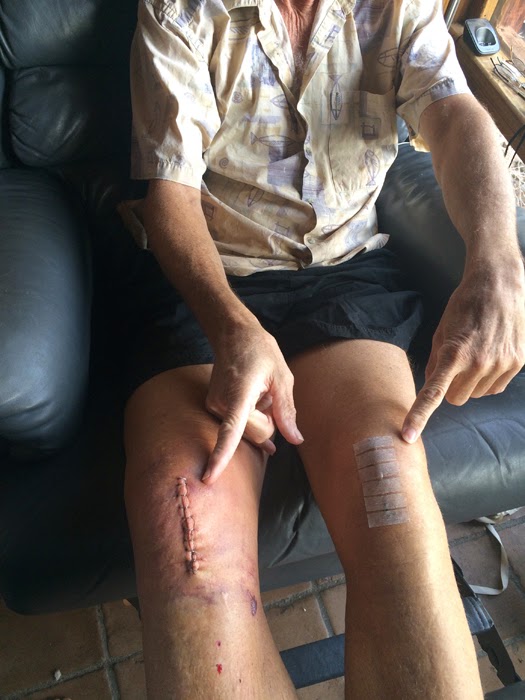 And I ain’t bowlegged no mo. 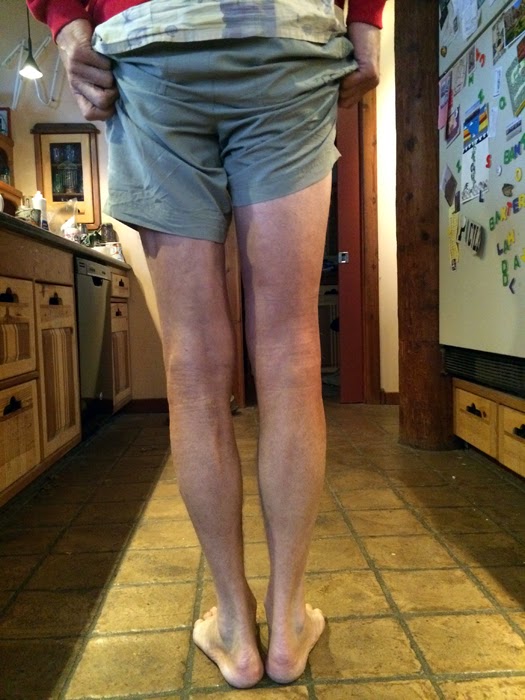 So now it is another month of the dance between exercise and recovery, stretching my limits and mitigating the swelling, pain and oxycodone, pushing it, and backing off. Got say, it really does hurt a lot. But progress is so alarmingly visible each day that I remain pretty damned enthusiastic about the whole process. Unless you catch me at a bad moment.