Guttural noises and other projects

brdfrd2020-11-26T17:02:46+00:00April 14th, 2014|News|
I spent far too many days making hideous sounds and smells with various grinding, cutting, chiseling, routing, and burning tools. The goal was to build functioning gutters around my hatches so that I can actually persuade the lids to keep the water [mostly] out of the bilge.  I was able to achieve my goal with only a minimum of structural degradation of the boat.
There is a good exhibit here of boat archaeology. Inside the hatch you can see some of the original red from the 1972 paint job. And fifty shades of gray from subsequent attempts to cover up that red. All sorts of interesting colors pop out once you get grinding. 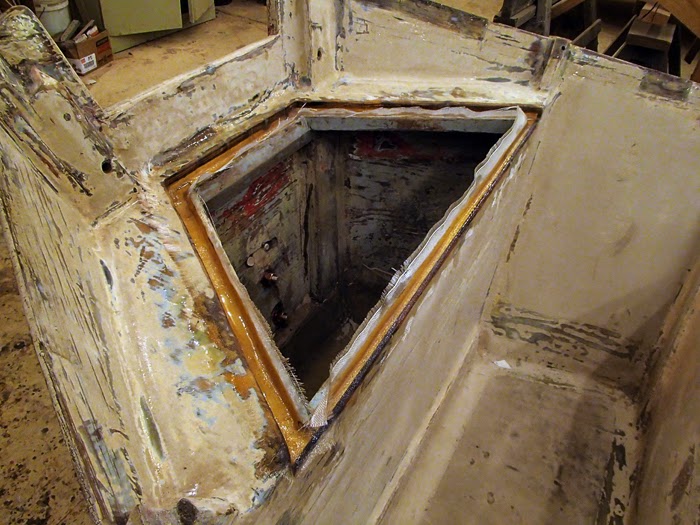 Here Roy is helping me remedy a problem–where the sloping seat back and the vertical bulkhead no longer meet due to me cutting away their junction to make a gutter. So we are coating a wedge of cedar with epoxy to implant between the two pieces of plywood. 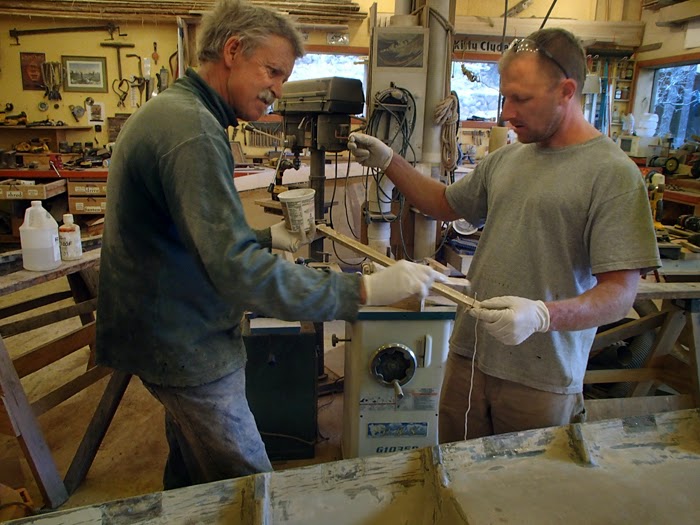 We tied strings through the stick beforehand, so that once we jammed it down into the cavity, we could pull it back up into place. 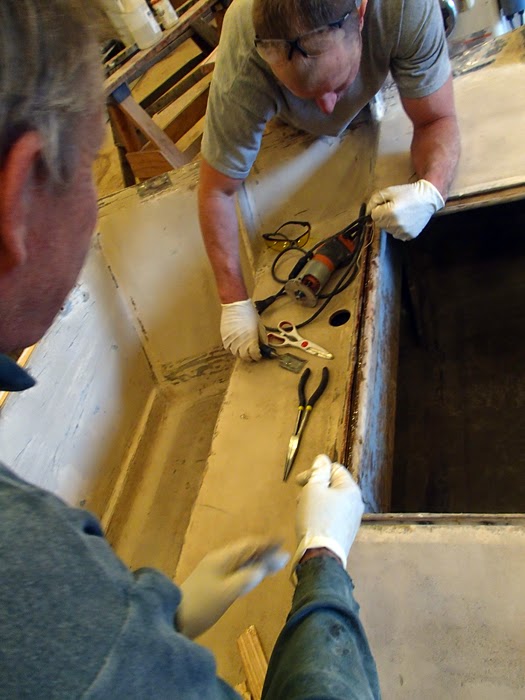 And blast a couple finish nails into it while the epoxy kicks. 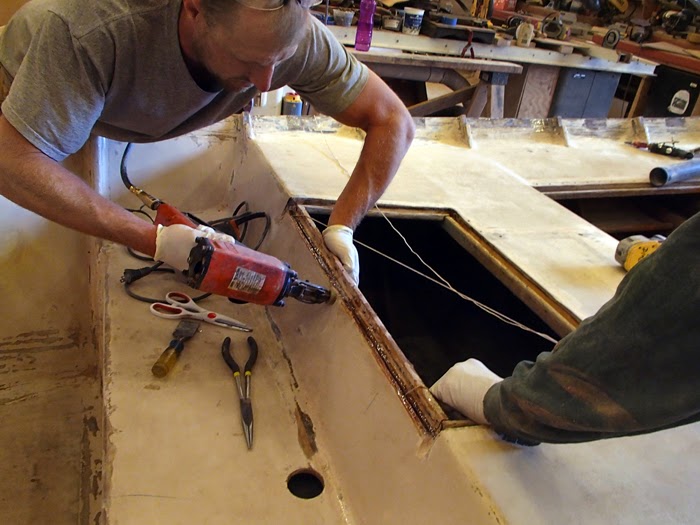 Then squeeze the bejeezus out of it. From what I can tell, this actually worked. Wonders never cease. 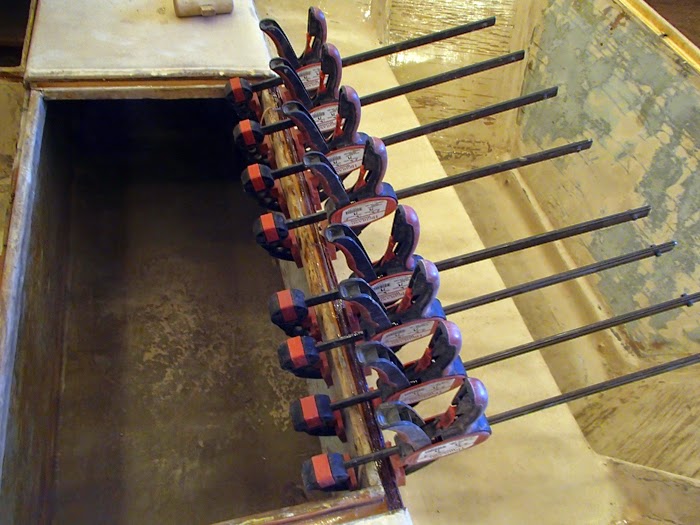 Then, once all the new gutters were cut to depth, we glassed them so the water might want to go out into the main boat were it can get bailed out, instead of drizzling down into the hatches. 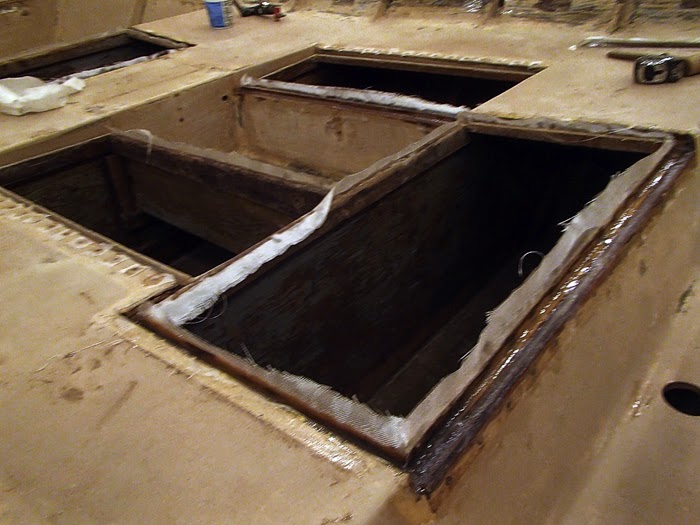 It’s a project I could spend the rest of my life getting just right, so eventually I just painted it and moved on. Gotta save some dinking around for the next rebuild. The deck color, for those who missed the story last year, is called Tequila Beach–named for the party beach below Lava Falls . The sand there is made up of ground bits of every Grand Canyon rock layer mixed with boatmans’ dead brain cells and unmentionable other party residue. I glued some of the sand from the beach to a card and sent it off to Kirby Paint to match. My theory is that I am such a slob that my decks almost always have some river sand and mud on them. This way they always look clean. 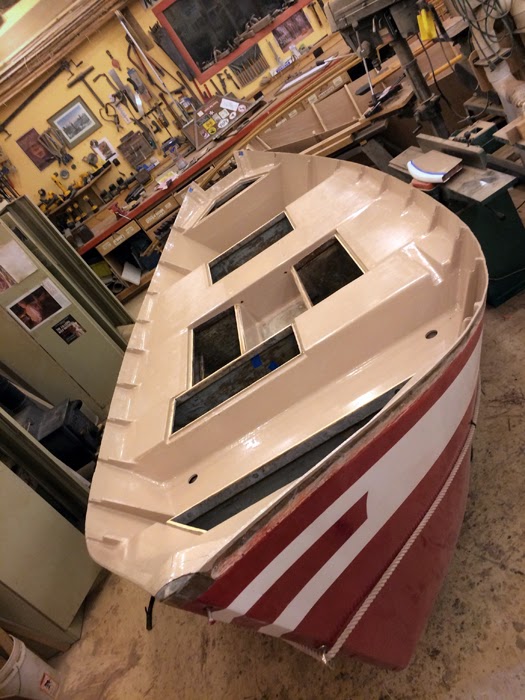 While all this is going on, the walnut gunwale blocks are cut and soaking in oil. 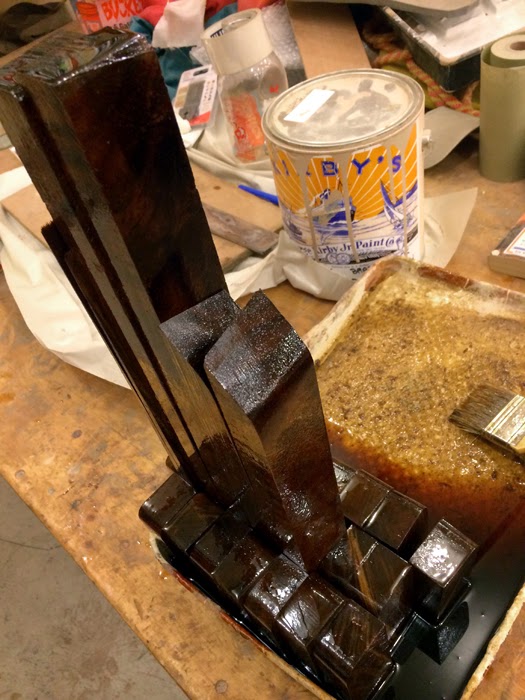 And the new gunwales are drying after their third extended oiling session. 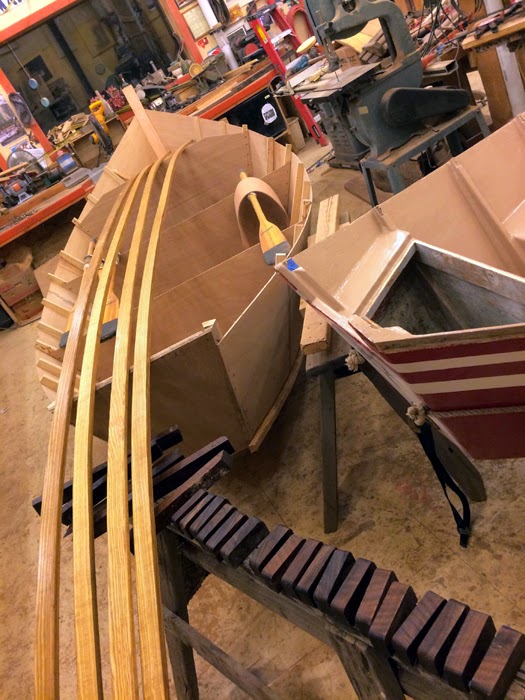 And the sweet old Smoker oars get a new paint job, stolen shamelessly from Rudi Petschek. 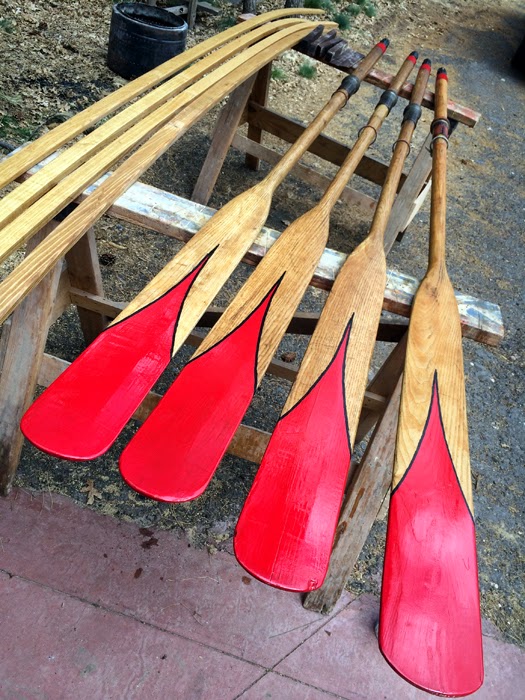 Today I screwed all the walnut gunwale blocks to the hull. This gave me the opportunity to discover that the rib tops were not all cut to the same thickness, so I had to build a bunch of them out to the same thickness as the new walnut blocks. I makes me wonder how my old gunwales ever worked without looking like lasagna noodles. Maybe they didn’t.

And finally tonight I measured out the inner gunwales and did the scary compound bevels to make them slide in there with microns to spare. Well, almost that close. No one’s perfect. 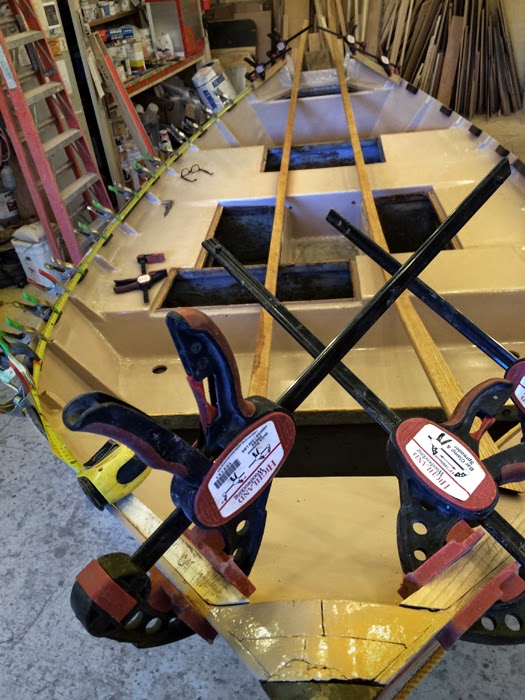 But lest things get boring, we always have a few other projects going on. Here, on an aluminum dory,  is an in-place pseudo-steaming process to get an ash gunwale to bend back into its proper shape for regluing–without unbolting it from the boat. Basically, I boiled the damned thing, by wrapping the affected wood in a towel and pouring gallons of scalding water over it over the course of an hour. I learned about this in boat school and was amazed that it actually worked. 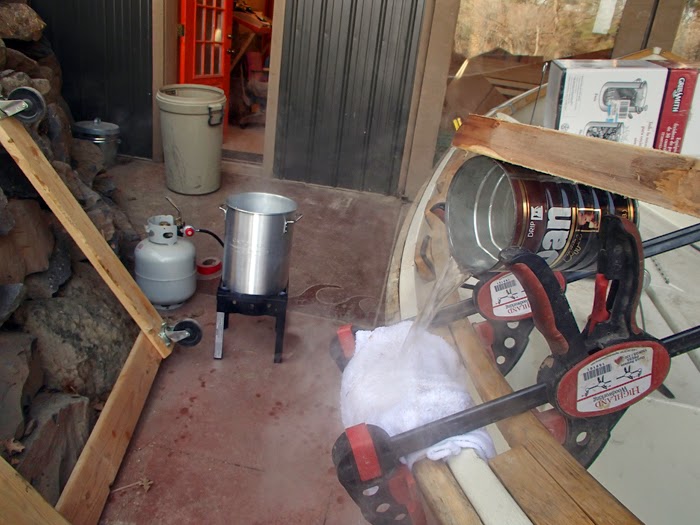 And over in the north boat bay, Roy is hard at work, when real life permits, cranking out the Brown Betty. Proper grinding requires lubricant. 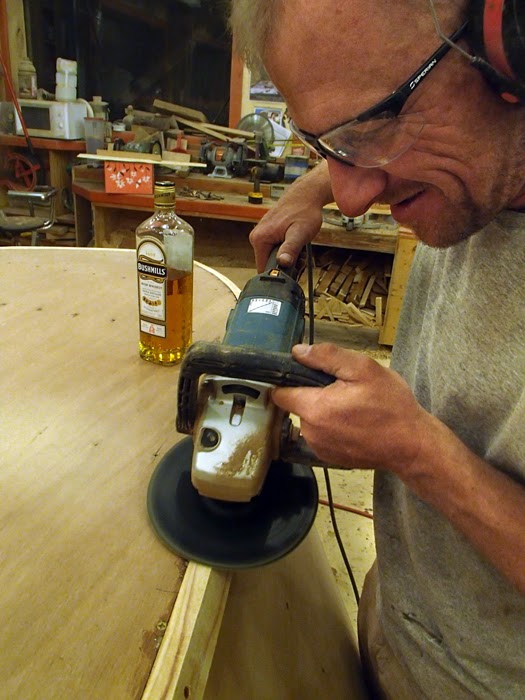 I love how boat projects make people smile. That and the lubricant. 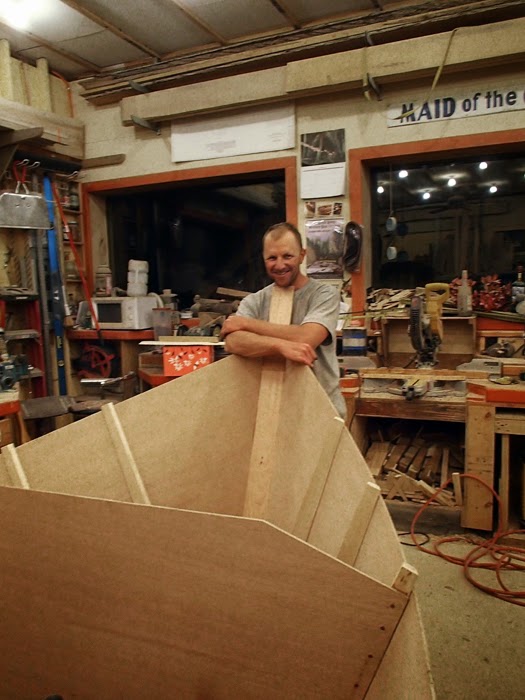 Here is the most hideous set of oar wraps I have ever seen–here to be replaced with a nice set of leathers. This is a public service project: ridding the planet of such a bad set of wraps. I never understood rope wraps to begin with. 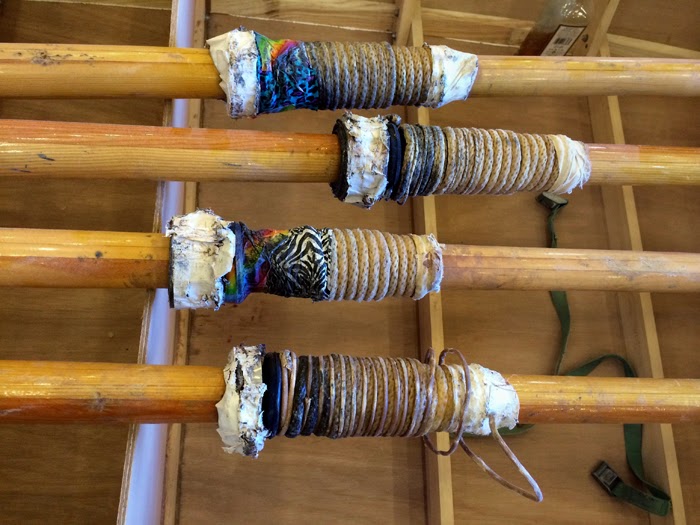 And Lora is hard at work on a smaller but more exacting project. She scored an original 1920s Vega Whyte Laydie banjo on Craigslist–considered by some traditional banjo freaks to be the “holy grail of banjos.” 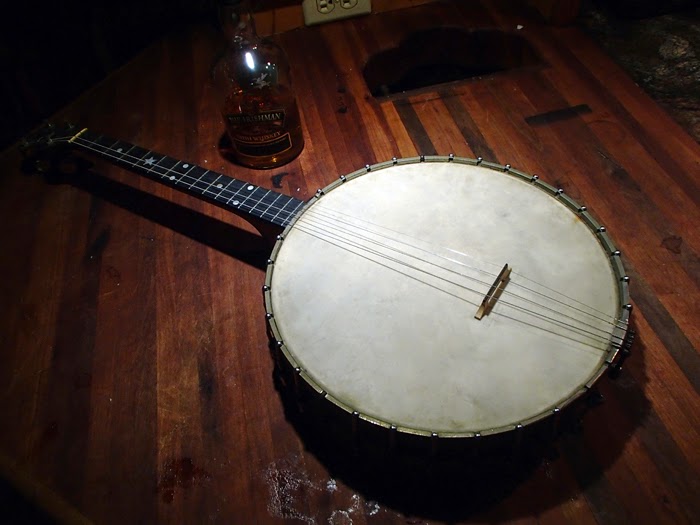 It is currently a four-string. Lora is making it a new neck so it will soon be a five-string. She is making a practice neck out of scrap wood before cutting up the fancy lumber. 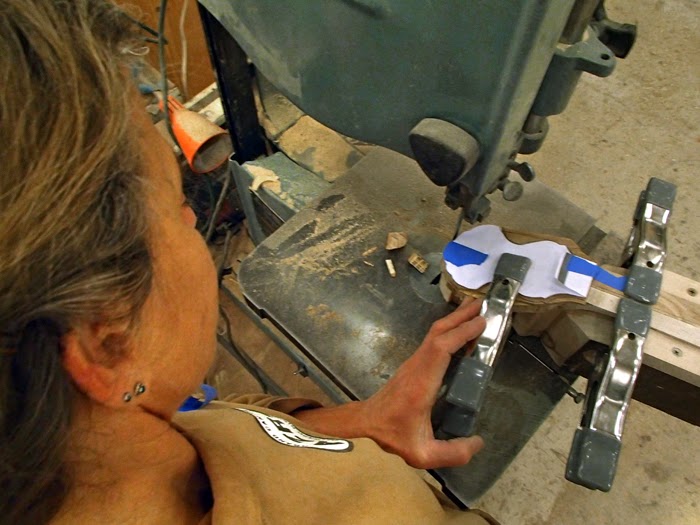 Tomorrow, I hope, is the big day for Cataract. By nightfall, with any luck, she’ll have her new gunwales on, cute little bronze stars and all. Guess I’d better go to bed.