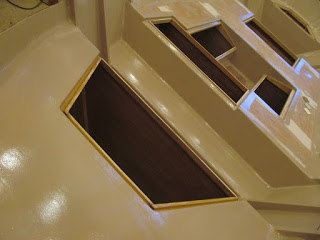 And we got the hatch lids glassed, nursing the fiberglass over the edges and around the corners. They came out great. 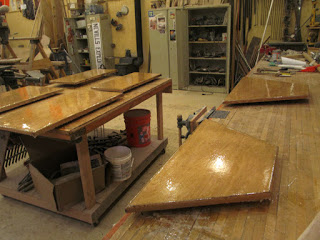 Then came the horrific moment where it is time to cut off the extra side material and rib ends. Which means you are deciding what the boat actually is going to look like. No cut on the boat determines its elegance more than the sheer line. If you get it right it is, in the words of Peter Spectre, heartstopping. If you get it wrong, it looks like a humpback chub. Which is okay, I guess, if you like that sort of thing.

I used a twenty-foot long batten made of foot-wide quarter-inch plywood, left over from the side panels, to determine the exact line. A wide enough batten, I figure, so that it cannot swerve side to side, but must remain true. That gave me what I wanted. I think. No turning back now. 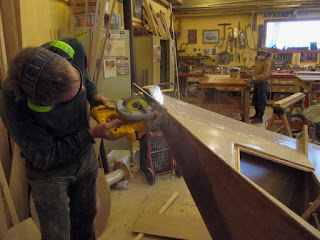 Now to make sure it is exactly the same on the other side. Here we are making an eight-foot level out of three shorter ones. 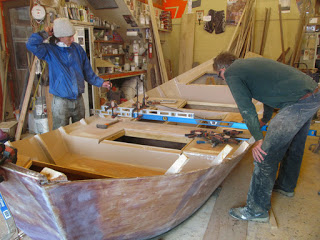 And agonizing. This better be right. Is it? 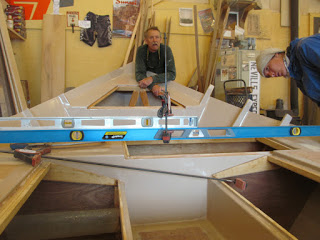 I sure hope so. Here we go. 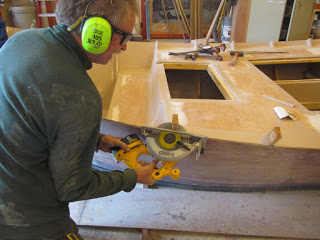 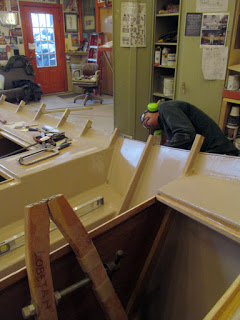 Janek trimming off what the circular saw wouldn’t reach. 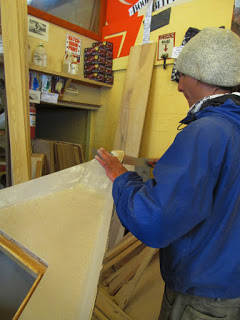 Getting a lot closer to being a boat. 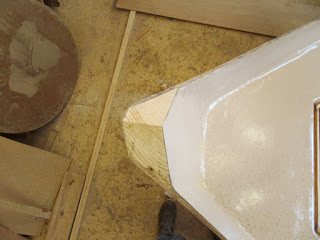 And finally, a reward for all out anguish. Flip her over. Measure out the proportional stripe. We went with 71% of the distance between rubber chine and proposed gunwale. That’s right between a quarter and a third of the span, which I was told in art class about a half-century ago is where you want it to be. I grovelled along the floor measuring the span every foot or so, calling it to Janek, who punched the calculator and told me where 71% was. Then we connected the dots with a long, flexible straight-edge, disregarding the clinkers. And so the line diminishes with the curve of the hull. Which looks unbelievably sexy. And on went the paint. Rich Red, it’s called, by George Kirby Jr. Paint Co., makers of fine traditional marine paint. My god what nice paint. Smooth, creamy, not saggy, and unbelievably high in pigment. Once that is dry we put on the top stripe. Salmon, that one is called, although I would call it mustard. 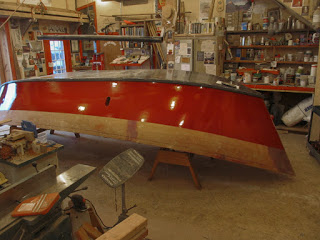 ‘Twas a long day in the shop, but it got a lot longer after we quit–turns out about a foot of heavy snow had fallen and was setting up in the driveway. Lora worked the trails, while the snowblower and I did battle with the driveway acreage. Stubbornness won again. 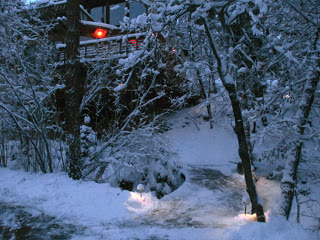 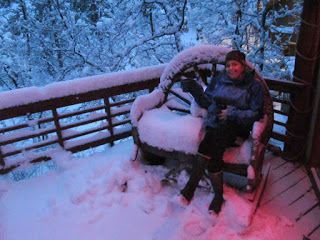