When angles meet angles at angles

Whoa. You wouldn’t think a boxy boat like the Moe would have such truly difficult angles, but, well, it does. At least at this stage of the production, there is nothing straight about it. The triangular bulkheads rise parallel to the exterior walls, which tilt out at about nine degrees. And the bottom is curved. This makes the angled bulkheads meet the straight bulkheads at some altogether peculiar angles. Yadda yadda yadda. Not complaining, just talking it out. But the good news is that I got three of the four of them done, in, and caulked today. It involves some very creative spiling and some alarming table saw cuts to make it work, but it has gone remarkably well, albeit slow.

The last bulkhead should go down pretty easily. Then the seat hatch goes in but that is relatively simple. And the decks go on. Woohoo. 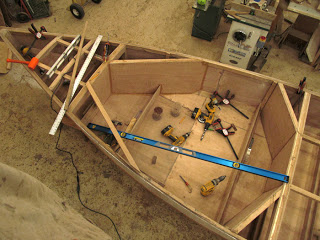 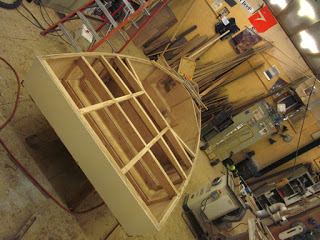 Looks like the Dewalt drills started their New Years party early. Two have passed out already. 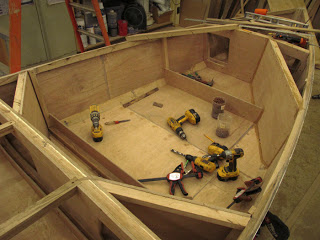