brdfrd2020-11-13T21:56:18+00:00December 19th, 2012|News|
When Sandy Nevills Reiff, Moe Nevills’s granddaughter, stopped in a couple days ago, she gave me some pictures of Moe herself. There are a million pictures of Moe’s only child Norman, the famous fast water man, but Moe stayed well out of the limelight. Anyhow, here she be: Mary Davies Nevills, aka Mae, transformed by her grandchildren to Moe, born around 1875, died May 2, 1959. I’d guess we are on a San Juan River trip here. 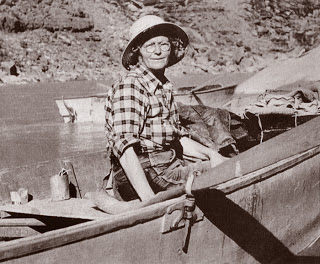 According to Gaylord Staveley’s fastidious research, Moe married William E. “Billy” Nevills in northern California in 1903 or 4 at the age of 28. Billy was 38. When Norman was born in 1908, Mary Mae Moe was so sick with peritonitis the doctor urged her to give the baby away. She didn’t, and later recovered.

In the 1920s the Nevills family moved to Mexican Hat to work in the oil fields. They built a lodge and trading post, opening in 1933. Norm soon found his way onto the river, married Doris Drown (what a dreadful maiden name for a boatman’s wife), and had two daughters, Joan and Sandra. Here is the lovely Doris with Joan and Moe: 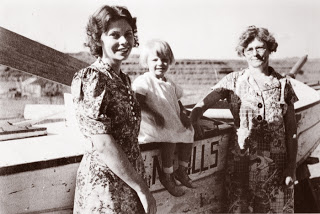 Here are Norm, Billy and Moe in front of the WEN, named for Billy’s initials. Moe is a lot more interested in the dog than the photographer. 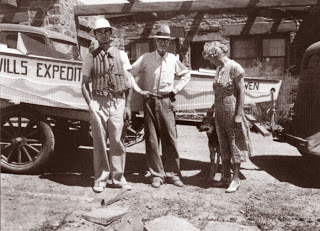 Lastly, a dreadfully sad shot gazing at a small model of one of Norm’s boats, shortly after Norman and Doris died in their plane just after taking off from Mexican Hat. 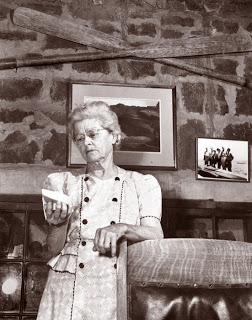 Anyhow, here’s to you, Moe.