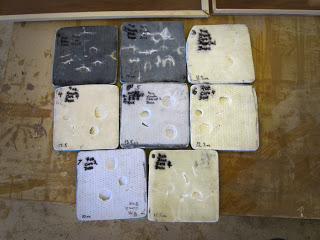 And the winner is…

#2.
A layer of biaxial cloth, covered by a layer of Xynole, whatever that is, and covered with a layer of 4-ounce glass to make it easy to finish. All laid up with Resin Research 2040. 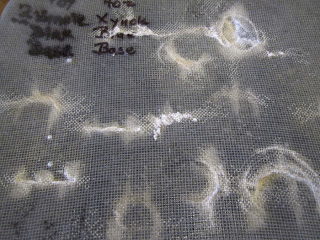 Number 2 looks a little worse for the wear, but that’s because it went though the semi-finals and finals. It held up remarkably to some serious abuse, failing well after we thought it would. The runner-up was #8, which was this same lay-up with a layer of Core Mat beneath the biaxial. It was the toughest of all but the additional weight and expense did not seem worth the marginal increase in toughness.

A few of the others flunked outright. Such as numbers 4 and 5 here, which are two different weights of Core Mat with Xynole and 4-ounce glass. The Core Mat just collapses without a biaxial covering. So there you have it. Losers!!! 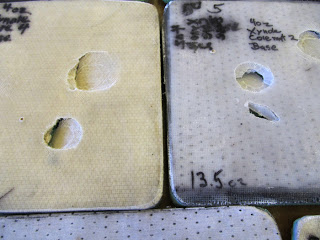