A fine way to become conscious this morning: sipping espresso in my big chair, watching the birds going berserk outside, I finally noticed this little guy sitting in the tree over my mini-wetland. A Northern Pygmy Owl. Isn’t he adorable? The damned Acorn Woodpecker gang finally harassed him too much to hang around anymore. You can see one of the kamikaze divers in the second picture. 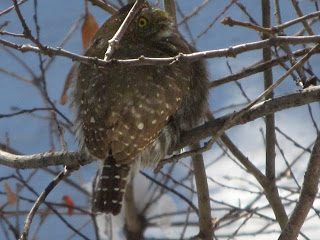 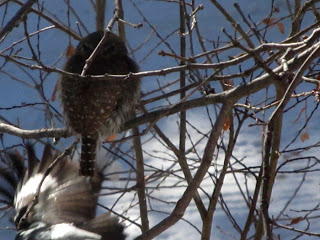 I spent the remainder of the morning and some of the afternoon reconditioning and reaffixing the aluminum bumper on the outside chines. As usual, out of seventy-six screws, the last three took about half the time, three broken drill bits, two bleeding fingers, and some creative and deeply felt swearing.

Then I rolled her over and impregnated the raw and traumatized wood of the interior with penetrating epoxy. I tried the ESP-155 for two-thirds of the boat, and Resin Research 2090 for the forward third. Perhaps I will see some difference. If I can ever uncross my eyes. Jeez, that stuff has got some fume action going on. Time to go up to the house. 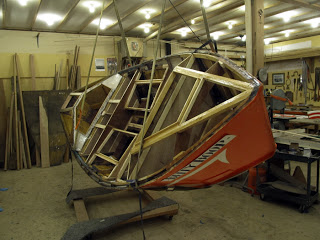 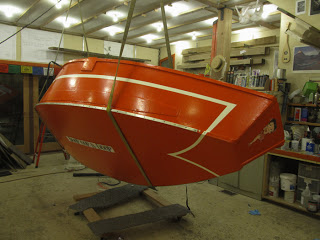 Betty Boop is now hanging in the position shown, as I have a big patch inside one of the hatches kicking for the night. I think it is the damage from this: 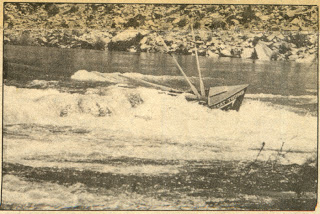 This was a mighty wreck in July, 1983 when the river was running 80,000 cfs. Larry and gang were running the right side of Badger when this happened. Larry’s leg was injured and he had to evacuate, but the boat stayed behind. A couple weeks later the water had dropped and Tim Cooper took this picture: 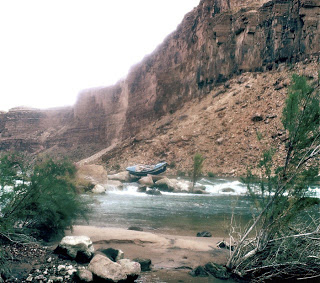 Poor, sad little boat. Tim said she was pretty full of sand. In the end, Gary Ladd told me, “It was pulled out by a very small helicopter after about 3 weeks on a nearly disasterous afternoon. Both the helicopter and the net that it used were too small.”

Anyhow, I am doing a reinforcing patch on some traumatized wood right about where the boat looks to have hit that front, right rock. So many stories in such a small boat.