Huge day in the shop 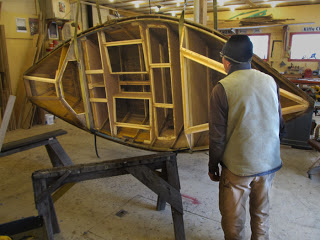 The outer chines put up a bit of a fight coming off, as they were glued on with copious amours of silicone, but we persevered.

Then we dug away at the bottom screws, spaced at about three inches apart on average and caked with many colors of paint. Let’s take a minute to praise old-style slotted screws. It is so easy to knock the paint and putty out of the groove and back them out. Had they been phillips or square drive, we’d still be digging. 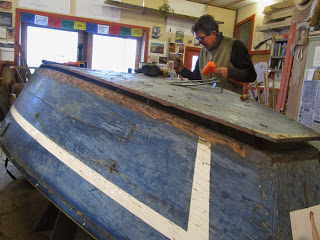 This gave us a fine display of what was too rotten to save and what was good enough to keep. This next shot is from the heart of the rot zone. It’s hard to see in the picture how bad it is, but there’s a lot of boat missing here. 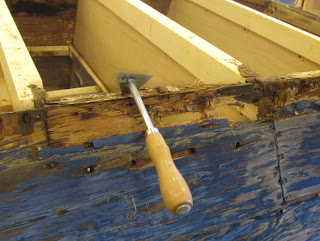 No problem. Cut that junk outta there. Here Jim is scarfing the trailer guard board back to a 8-1 bevel. Roy is cleaning up the fatigued edge on the far side. To the lower left we have removed a long strip of unsalvageable side. Next Jim is going to bevel this new edge as well. 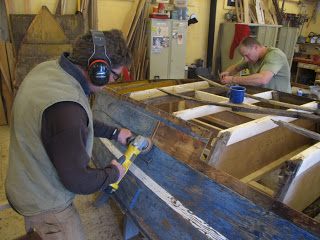 The far side is now impregnated with epoxy and squeezed between a clamp or two, which will strengthen the traumatized plywood edge to at least its original strength if not moreso. 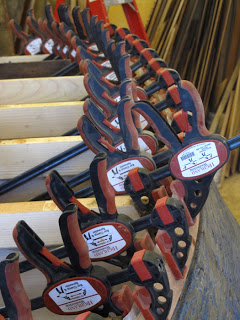 And finally we scarfed in a new panel on the near side. By tomorrow morning we’ll be ready to replace the forward two-thirds of the inner chines, which we removed due to rot. 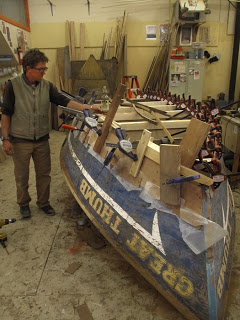 A remarkably productive day. Time for a sip of Lord Culvert.