Ugghhh. What a long day of wretchedity. Even though I managed to procrastinate until nearly four o’clock, I still ended up with nearly an eight-hour day in the shop and, thanks be to cussedness, I got done what I hoped to get done.

A) trim the floor back into the plane of the sidewalls. Done: with a Dewalt circular saw and grinder.

Here it is about half done: 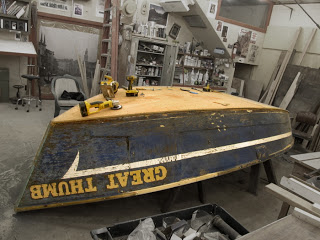 B) Remove old paint from boat. Done: With a paint scraper, belt sander, random orbital sander, grinder, a lot of patience and muscle, a modest amount of alcohol, and an assortment of other tools. And swearing.

The stains on the floor are from a Lord Culvert blessing on Tuesday. The big patch on the left near the chine is replacing an old bad patch and a bit of assorted other trauma. 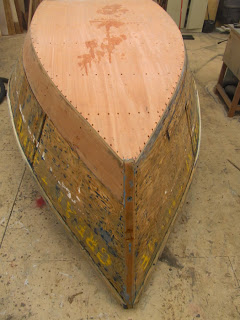 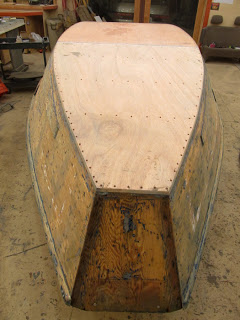 C) Saturate the entire exterior with penetrating epoxy. Done: with about a gallon and a half of Restor-it, also known as Clear Penetrating Epoxy Sealer, also known as “thinned down crap” (by my epoxy chemist friend) (but hey, I bought it before I knew… and it does seem like it will stabilize and seal the old boogered wood.)(epoxy chemist says use a really good low-viscosity epoxy and thin it with xylene–better product at a fraction of the price.)(the bastards are charging you about $80 a gallon for the $15 xylene they are thinning theirs with, says he.)(next time. Like I say, I’d already bought the stuff.)

This is after about four liberal coats. The wood has finally stopped slurring it up. 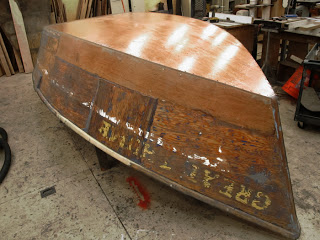 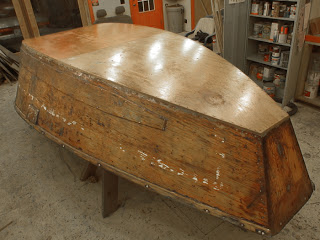 It almost looks like a boat again. Tomorrow, assuming this stuff kicks in a timely fashion, I will fair out the boat for sanding, add the missing half of the left rub strip, and perhaps even affix the outer chines. Then I can paint it! Whee!

P.S. I shed my clothes and took a long hot shower an hour and a half ago. I can still smell the xylene.